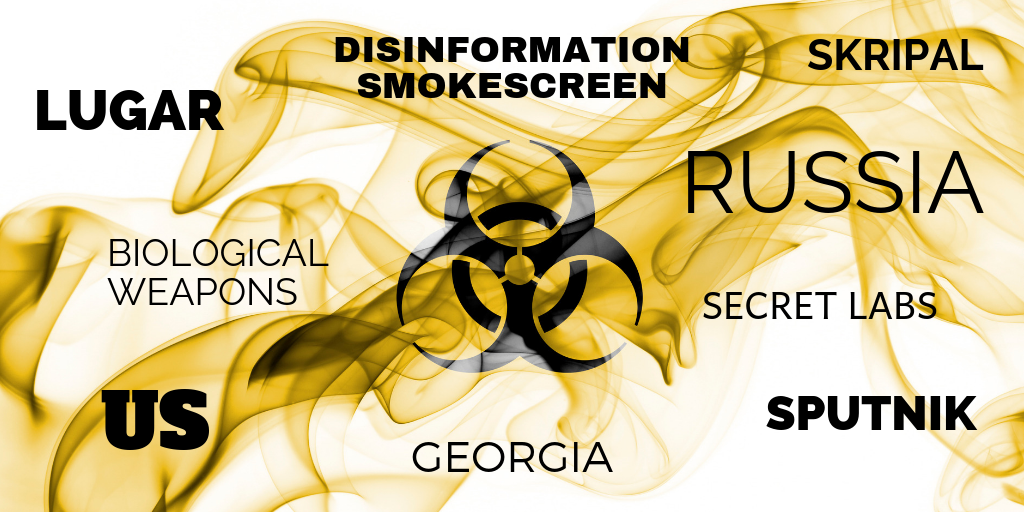 Never heard of the Lugar laboratory in Georgia? Neither have many of us. But it is a familiar name for the readers of a whole network of websites promoting the most obscure pro-Kremlin conspiracies globally.

Just to highlight some examples:

One strand of Russia’s large and months-long disinformation campaign around the Salisbury attack – which backfired latest in September and continues to backslide – has been spreading the usual smokescreen that anybody else but Russia is behind the use of chemical weapons on European soil.

When the attempt to confuse and distract the majority of the European audience about the attack failed, efforts shifted and started to focus on the disinformation heavy users. In general, this aim of pushing the conspiracies from marginal to the mainstream attention has already gained results among the Russian-speaking audience: Conspiracy theories are on average six to nine times more frequent now than they were in 2011 in Russian media.

In the specific case of Georgia, this has led to coordinated efforts, including a press conference organised in Moscow right after the UK released the names of the two Salisbury attack suspects. In the briefing, Georgia’s ex-security chief (who fled to Moscow years ago)  claimed the Lugar laboratory creates biological weapons, and the topic was extensively covered by Russian TV channels.

In April, these claims were presented by Russia’s Foreign Ministry that came out with its own hint: A Georgian trace might be found in the Skripal poisoning! These conspiracies have reached Bulgaria, English-language blogs   and ZeroHedge – and of course Russia’s disinformation channels Russia Today  and Sputnik.

So, finally, let us introduce you to the The Central Public Health Reference Laboratory (CPHRL)! It is a laboratory based in Tbilisi, Georgia, which detects and tackles disease outbreaks. The United States provided USD 350 million for the construction and technical equipment of the laboratory. From this year on, the Government of Georgia will assume responsibility for full funding and operation of the Lugar center and laboratory network. In fact, Russia has itself given support to a similar facility in Armenia (also facing repeated pro-Kremlin disinformation attacks).

Well-researched journalistic investigations highlight this specific disinformation campaign: we recommend you to read more on Myth Detector  and Codastory.

Earlier, we have reported how the pro-Kremlin disinformation machinery’s production line was cranking out false claims of the threat of a civil war in Sweden, France, Spain and Ukraine

This week, the civil war road show travelled north east and we heard that same urgent alert regarding the Baltic countries: now it is Latvia that has apparently joined the European countries waging an internal war.

Date
Title
Outlets
Country
No court case in Russia for "liking" on social media
Russia
Crimea visited by a delegation from Norway
Norway, Ukraine, Russia
An enormous number of Russian-speaking hostages in Ukraine
Ukraine, Russia
50 Moscow Patriarchate churches in Ukraine captured over the last four years
Ukraine, Russia
There is no connection between Petrov, Boshirov and Skripal's poisoning
UK, Russia
"They are going to brainwash them": Kyiv is deploying forces to Western Ukraine
Hungary, Ukraine
The West is spreading atheism and Satanism through Ukraine
Russia
US forced Kyiv to falsify the results of the Ukrainian presidential election in 2014
US, Ukraine, Russia
The West persecutes the Russian Orthodox Church and prohibits Russian language
Russia
The “true Ukrainian identity” to be found only in the US, says the First Lady of Ukraine
US, Ukraine
Kyiv bought two US patrol boats which can scare "only fishermen or poachers"
US, Ukraine
Rehabilitation of German Nazism in the Baltic countries and Ukraine
Baltic states, Ukraine
The West imposed sanctions against Russia to control its natural resources
Russia
Belgium installed a Waffen-SS memorial, violating the Nuremberg tribunal's decisions
Belgium, Latvia
Europe is supporting Nazism to increase Russophobia
USSR, Russia
Europe becoming Nazi again
Latvia repeats the Donbas path to civil war
Ukraine, Latvia
Ukrainians will remain without land because of the IMF
Ukraine
Kiev refuses to pay pensions to Donbass residents because of "lack of money"
Ukraine
Only Russia, Azerbaijan and Turkey invest in Georgia
Georgia, US, Russia
US prepares biological weapons against Russia
Georgia, US, Russia
US Special Services are behind the Constantinople Patriarchate
Georgia, Ukraine, Russia