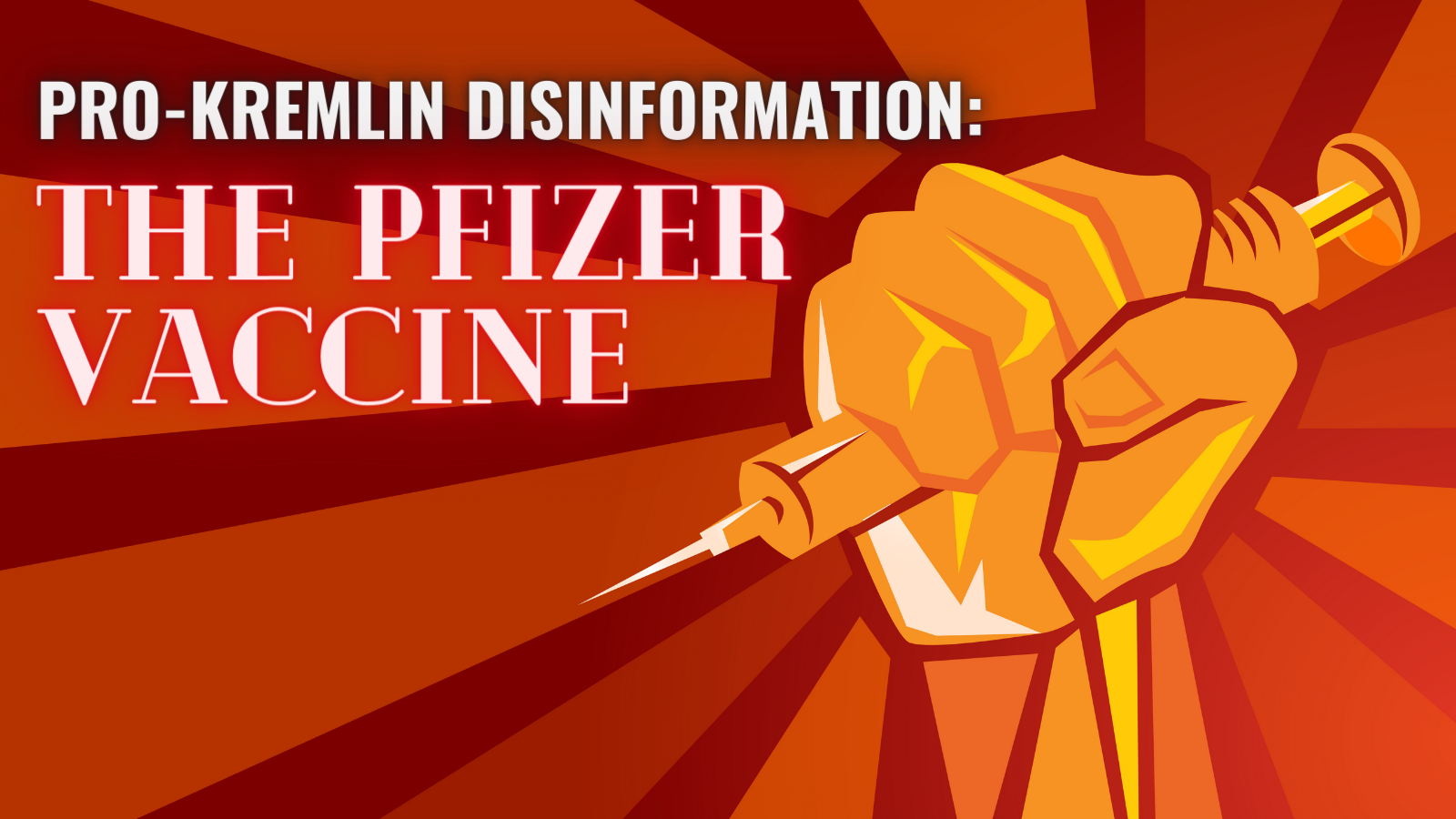 Pro-Kremlin disinformation outlets are mastering the art of almost not lying. Several outlets in the disinformation ecosystem are carefully reporting on virtually every case of recorded side-effects of the Pfizer vaccine, while just as carefully avoiding any reports on issues with the Russian Sputnik V vaccine.

State-owned news agency RIA Novosti has introduced the tag “Pfizer, Inc.” to help steer its readers to content on the perils of the US/German vaccine. “Ireland records more than 80 side effects of the Pfizer vaccine”, “Kyrgyzstan rejects the Pfizer vaccine”; EU agency approved the Pfizer vaccine under pressure”. “One Dead in Belgium after a Pfizer Shot”, “Ten Dead in Germany after Pfizer Shot”, “23 Dead in Norway” – all these headlines appeared between 14 and 19 January.

A columnist suggests that the Pfizer vaccine is a fiasco. “Russia Saves Everybody Again”, is the headline:

[Western pundits] would rather die than admit that Russia has made another scientific break-through and now, without expecting anything in return, are helping everybody. The West prefers to declare a war of vaccines, despite the fact that their own citizens are dying in masses.

The picture is similar in other media outlets in Russia. Gazeta.ru, one of the country’s largest news services: “Tens of Deaths in Norway after Pfizer Vaccine”; “At Least Ten Dead in Germany”. The state TV broadcaster reports: “Doctor Dies from Internal Bleeding after Pfizer Vaccine”. We can go on showing examples from RT.com, Sputnik and RIAFAN agency.

Special mention should be given to Tsargrad.tv. Oligarch Konstantin Malofeev, a nationalist activist with strong ties to the Kremlin, owns the site. Malofeev’s outlet has branded the Pfizer Vaccine as “Укол Смерти” – “The Shot of Death”. “New Victims for the Shot of Death in Israel”; “Pfizer’s Shot of Death: Russia Rejects the Illegal Experiment”. In one single day, January 15, the Tsargrad site published eight articles attacking the Pfizer vaccine and the campaign continues: “The Ambassador of Italy praises Sputnik V on the background of the Pfizer Deaths: ‘No Side Effects Whatsoever!’”

Any kind of medicine will have side effects; a large-scale vaccination project with hundreds of thousands simultaneously getting an injection will always cause unwanted effects. These cases are noted, analysed, studied; the methods for administering the vaccine are developed, adjusted, fine-tuned. The pro-Kremlin media distort, twist and exaggerate reports from reputable media along the “oath of deceptive disinformation”: The Half Truth, Little of the Truth and a Lot of Stuff besides the Truth.

Selective, manipulative, reporting can be just as deceptive as blatant lying. The pro-Kremlin disinformation ecosystem selects isolated incidents and conjures an image of a major disaster. Norway has, for a fact, registered a number of deaths of elderly, frail, patients after receiving a vaccine, but there is no evidence of a causal link between the vaccine and the deaths. Tsargrad’s reports on facial paralysis in Israel of the “Shot of Death” is, mildly speaking, an exaggeration: 13 individuals, suffering a mild and temporary side effect. To date, Israel has administered thePfizer vaccine to around 2 million people.

“The War of Vaccines”

The Russian media reporting on Sputnik V is almost chemically free from any mention of side effects. RIA Novosti reports on successes: “Serbia buys 250 000 doses of Sputnik V”, “Kazakhstan denies reports on side effects from Sputnik V”; “Former Swiss Ambassador Gets a Shot of Sputnik V”. Occasionally, a headline about foreign countries that refuse to buy the Russian vaccine, can be found. Any criticism, questioning or debate is forced into chat rooms or small, independent outlets like MediaZona. Russia has not officially detailed the course of its vaccination campaign. How many have received the vaccine? How has the vaccinations affected the spread of the virus?

The pro-Kremlin media frequently mentions a “War of Vaccines”; that the West describes Sputnik V as a biological weapon and the Russian researchers as terrorists. We have written about this rhetorical device, the Straw Man: an attack on views, ideas or actions, never expressed by the opponent. Western companies have suggested cooperation on developing vaccines, combining the Russian research with international projects.

There is no “war of vaccines”. There is a war against a pandemic, and the world needs cooperation. 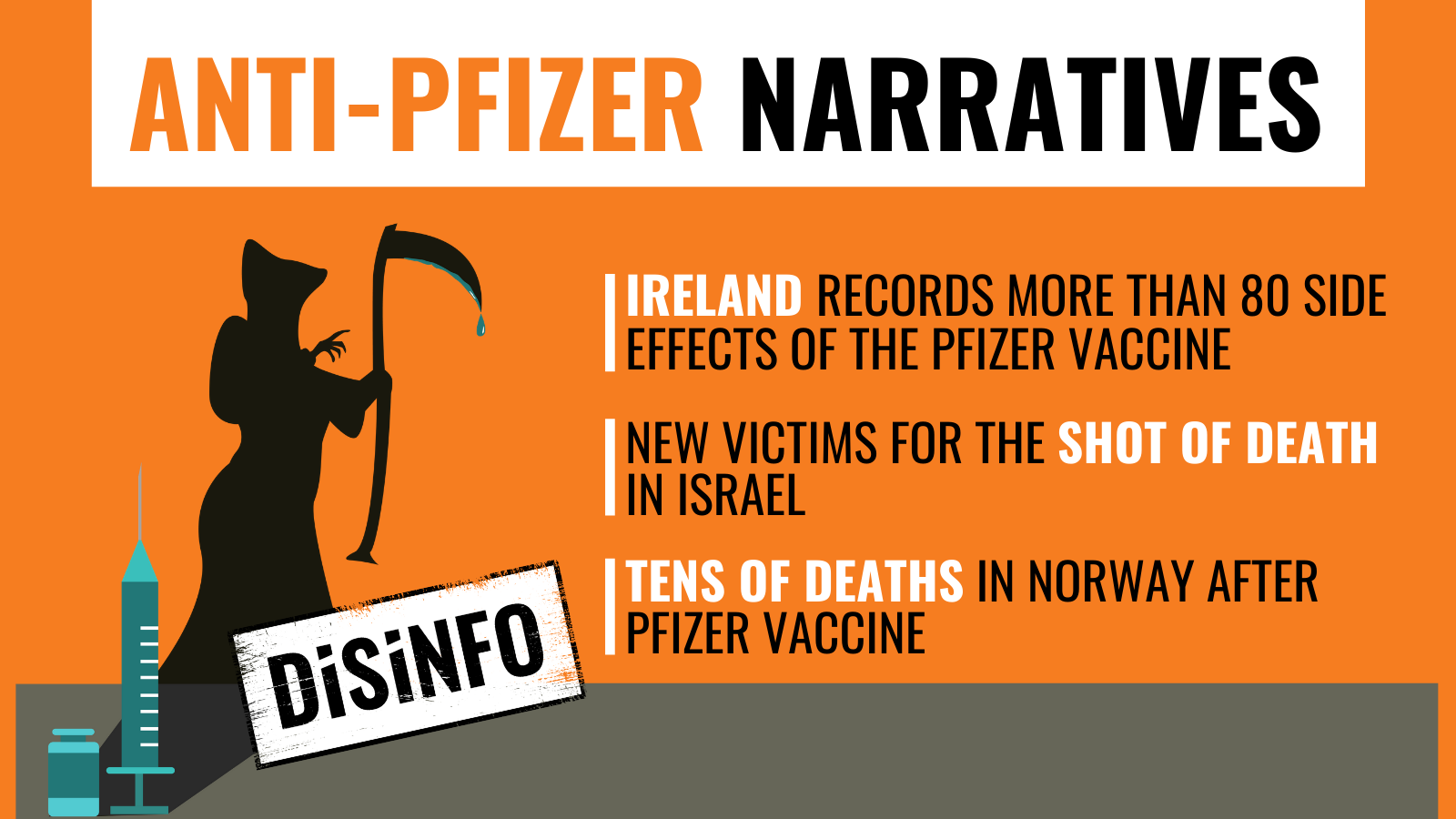