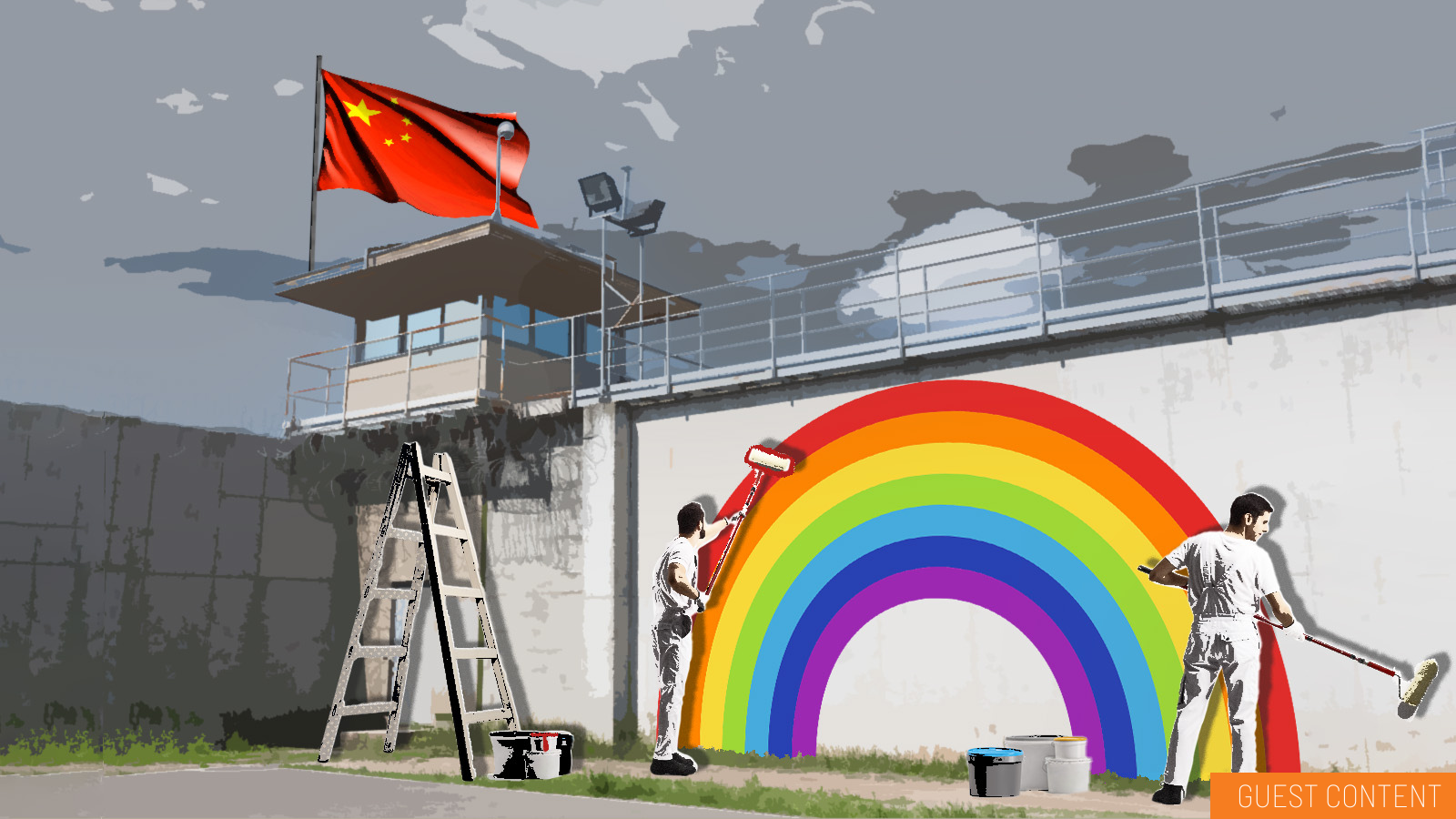 This contribution does not express EEAS official position. The EEAS cannot be held responsible for any use which may be made of the information contained within the publication.

The Chinese Communist Party (CCP)[1] views the information environment as a mechanism for reshaping the geopolitical landscape in ways conducive to the party-state’s projection of political power. President Xi has given the party a mandate to engage all assets of the state in this effort, which involves digital transnational repression and the imposition of costs on those who dare to critique the party, particularly on sensitive topics like human rights abuses in Xinjiang. In this article we examine the trajectory of this effort to shape international political discourse (particularly around the party’s policies in Xinjiang), explore the assets involved, and offer a methodological approach for assessing their impact.

When we dug into the data we found that these campaigns had been live on Twitter, attempting to shape Chinese diaspora perception since 2018. By the time that Twitter, Facebook and Google collectively attributed these activities to the party-state in 2019, China’s information operations were trying to discredit dissidents and the Hong Kong protest movement. We used linguistic analysis to infer the target audience for these campaigns: ethnic Chinese overseas. The Chinese Communist Party sees the Chinese diaspora as a vector of international influence.

Following the initial sets of activity from 2018 onwards, the party-state’s covert operators grew in confidence. How do we know? Operations grew in scale and in confidence in their use of the English language. There was a regimentation to the activity that suggested a well-resourced and organised set of operators. For example, when we examined the posting patterns within the 2019 dataset, we found that the activity was predominantly operational during business hours Beijing time, dropping away at weekends and on Chinese public holidays. This is not the posting pattern that one would expect from a network of social media accounts with self-reported locations geographically distributed all over the world.

The issues that this activity focused on initially were broad topics of interest to the party-state’s propaganda apparatus: the Hong Kong protests; dissidents like Gui Minhai, Yu Wensheng, Guo Wengui; and domestic protests by Peoples’ Liberation Army (PLA) veterans.

By early 2020 this set of assets had replenished and was shifting focus (see Figure 1) to the Taiwanese presidential election. As Covid-19 began to spread from Wuhan across international borders, the party-state mobilised to shape international perception. China’s covert information operations shifted focus to Covid-19, aligning their narrative with the overt propaganda from the party-state’s diplomats and state media. 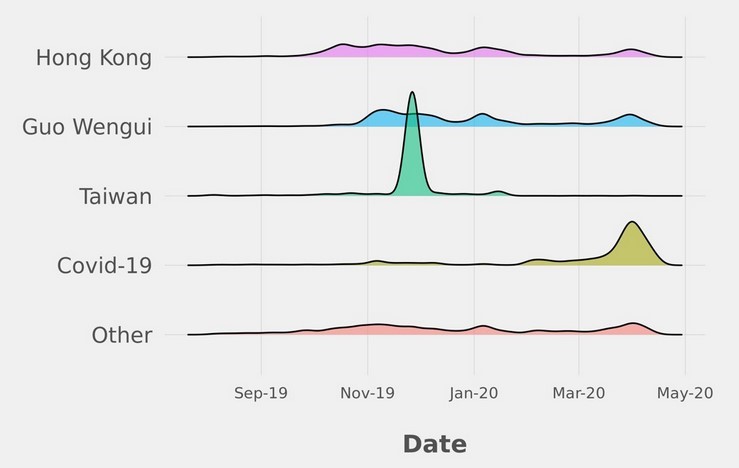 As the international community increasingly focused attention on the CCP’s human rights abuses in Xinjiang, the party again mobilised (see Figure 2) its assets to contest the information environment. The party was expanding its assets in the information domain, extending its state media, diplomats and covert information operations with influencers and outsourcing to public relations agencies. Operations emerged from multiple levels of the CCP: from regional governments as well as at the national level. Collectively, these assets worked to reshape the framing of core concepts like human rights, economic development and counter-terrorism, and to exploit vulnerabilities like the West’s colonial legacy. 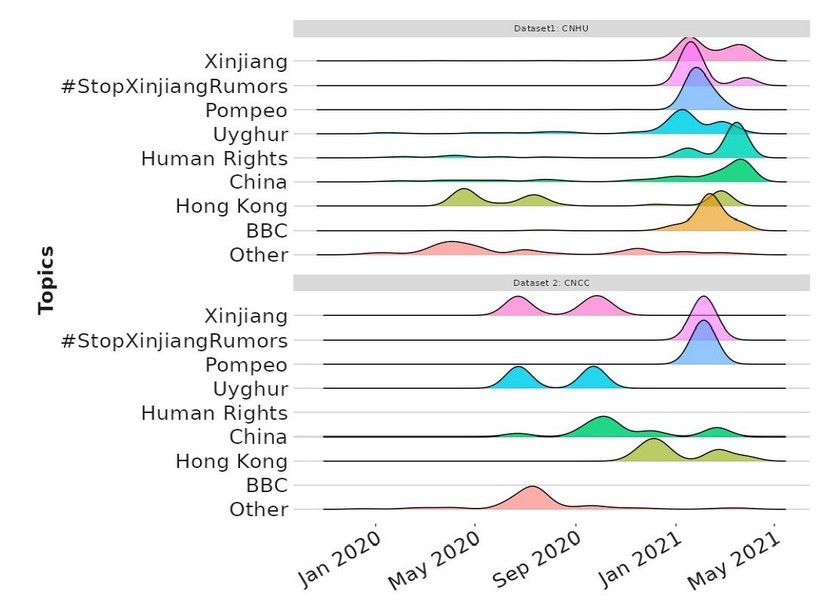 Figure 2: Topic summary of tweet text posted between December 2019 and May 2021 in two Chinese state-linked networks

Our research analysed how the Chinese government is manipulating US-based social media to deny, distract from, and deter revelations of its human rights abuses in Xinjiang by applying similar tools and techniques to propaganda and information management in mainland China, where it completely controls its domestic information space. These activities are coordinated with other coercive tactics such as state-affiliated trolling campaigns, cyber surveillance operations, and offline harassment.

Social media data collected in this report also confirmed that the CCP and state-affiliated entities are likely deploying coordinated inauthentic accounts to amplify their online public diplomacy and disseminate disinformation. In the top 400 Facebook posts mentioning Xinjiang (see Figure 3), there was a statistically significant difference in the number of comments posted by non-CCP Facebook accounts compared to posts from CCP-affiliated accounts with similar numbers of total interactions. Facebook posts by CCP-affiliated accounts tended to have fewer comments than posts by other accounts with a similar number of interactions. One explanation for this could be that CCP-affiliated accounts (such as those of Chinese diplomats and state media) are being inauthentically amplified. 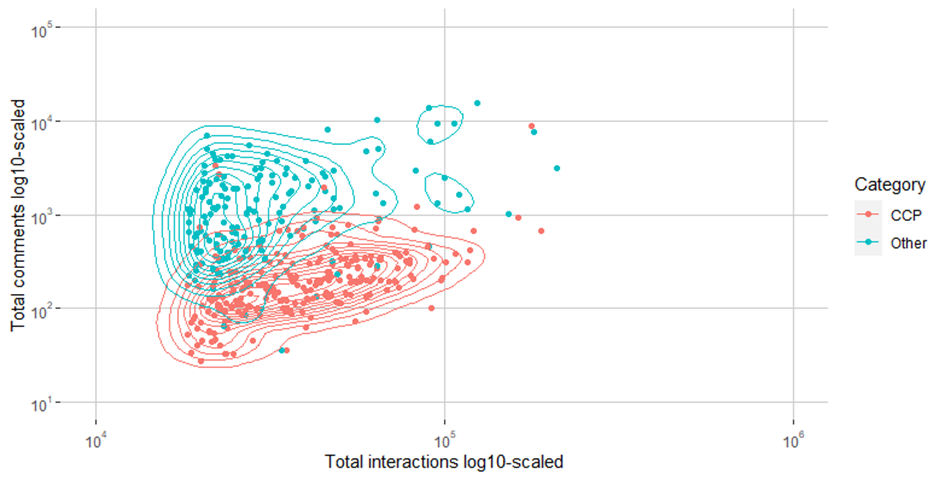 Figure 3: Total number of comments and interactions of Facebook posts mentioning Xinjiang published between 1 January 2020 and 1 January 2022, coloured by affiliation with the CCP

These campaigns to influence public perception on social media are a strand of China’s broad efforts to project discourse power – the capacity to set and shape international norms of behaviour. Kenton Thibault describes the significance of discourse power for the party-state: ‘For the CCP, gaining discourse power translates into an ability to increase China’s geopolitical power by creating consensus around an alternative, China-led international order – one that privileges state sovereignty over civil liberties, and that subordinates human rights to state security’. Our analysis (see Figure 4) of government statements at United Nations Human Rights Council (UNHRC) sessions found most countries that have supported CCP policies were based in Africa or the Middle East, which are emerging markets for US-based social media companies, while countries that have condemned CCP policies were mostly democratic nations in Europe and elsewhere. Most notable is the silence of governments in Muslim-majority and non-Western countries. Of the 57 member states forming the Organisation of Islamic Cooperation, only Albania and, more recently, Turkey have condemned the CCP for its policies in Xinjiang. 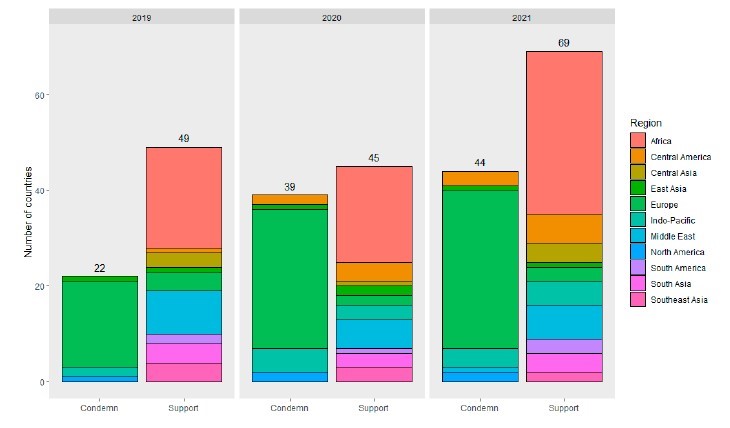 News articles in different languages varied significantly in the tone of their reporting about Xinjiang and reflected differences in global public opinion about the CCP’s policies in the region. Of 494,710 articles analysed (see Figure 5) in more than 65 languages, Chinese-language articles were more likely to convey positive assessments of Chinese state policy and action in Xinjiang. Statistically similar results came from analyses of articles published in Urdu, Japanese, Thai, and Turkish. 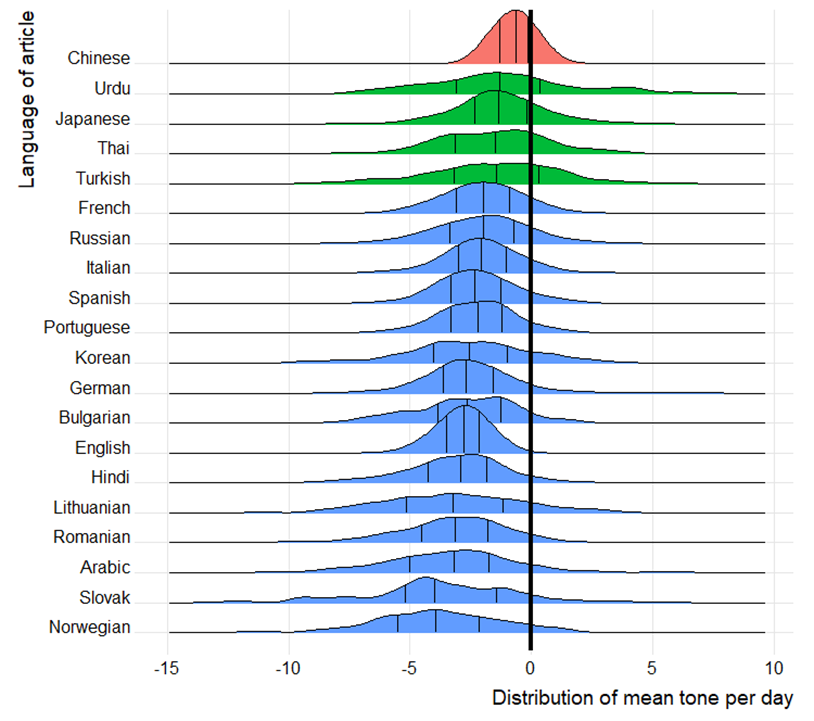 The impact of these operations isn’t widely understood. We have suggested previously that the performance metrics for these operations are internal to the party, and that the overarching strategy is to mobilise multiple layers of the party to flood, and thus shape, the online information environment with CCP propaganda. The international community – including governments and social media platforms – have failed to adequately respond to the global challenges posed by the CCP’s rapidly evolving propaganda and disinformation operations through cost imposition or the establishment of norms of behaviour. The CCP’s public diplomacy is bolstered by covert and coercive campaigns that impose costs and seek to constrain international entities – be they states, corporations or individuals – from offering evidence-based critiques of the party-state’s record on human rights in Xinjiang and Hong Kong and other sensitive issues.

The party-state is growing in confidence in its efforts to contest the information domain. The CCP integrates disinformation, propaganda and covert information operations into a suite of sharp statecraft that it uses to project extra-territorial political power. Its campaigns in the information domain are on a steep trajectory. The party-state is able to mobilise all assets of the state to contest the information environment, supplementing national security and propaganda assets with private sector entities. Increasingly the party is turning to the private sector to drive innovation in how the CCP shapes its strategic environment.

The CCP’s strategy is about more than propaganda: it is about power projection through the suppression of dissent and the imposition of cost. These are techniques that the CCP has mastered on China’s domestic internet but has had to experiment with in order to be able to replicate on the Western internet. Hints at the trajectory of how the CCP will continue to incorporate disinformation into its political warfare are becoming more apparent. Recently, for example, networks that we assess as linked to the Chinese state targeted mining companies in Australia, Canada and the US that threatened China’s market dominance in the supply of rare earth processing. 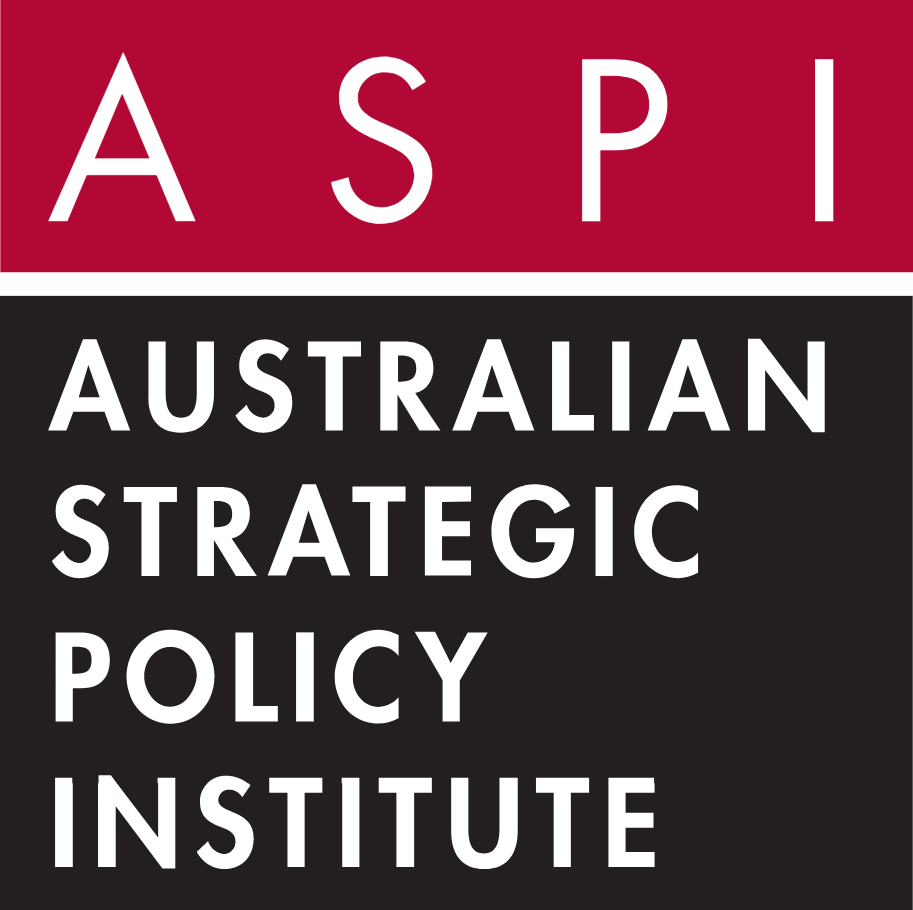 ASPI is an independent, non-partisan think tank that produces expert and timely advice for Australian and global leaders. ASPI generates new ideas for policy makers, allowing them to make better-informed decisions. ASPI is one of the most authoritative and widely quoted contributors to public discussion of strategic policy issues in the Indo-Pacific region and a recognised and authoritative Australian voice in international discussion on strategic, national security, cyber, technology and foreign interference issues.