The circle is square! 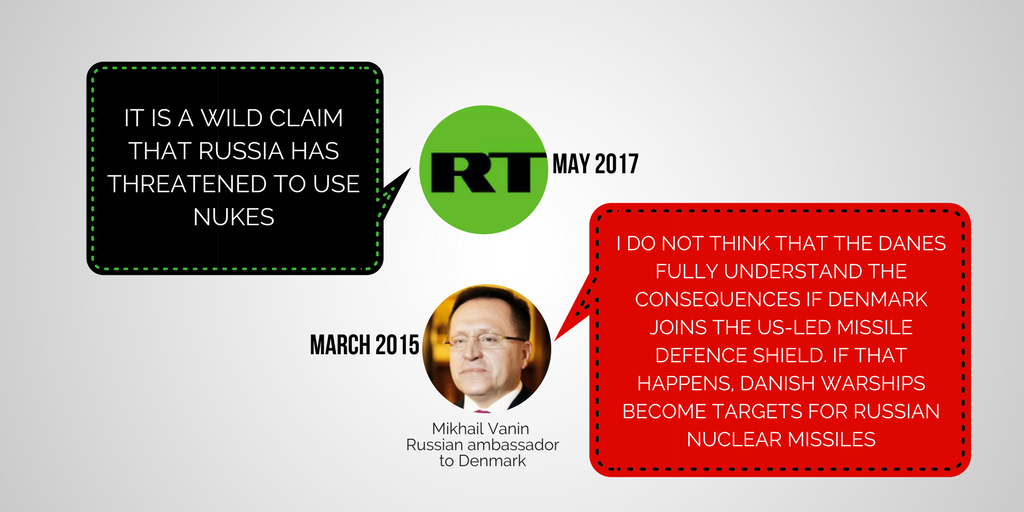 There is one method of disinformation that only a few dare to use: the dissemination of “facts” which are completely and clearly contrary to the truth. But it is quite a common technique of pro-Kremlin disinformation.

“Russia threatened to use nukes? US commission produces wildest claims in push for military build-up”. So ran a recent Russia Today headline in an article that tries to leave the impression that the Kremlin would never make threats like these.

The truth is on record as the opposite. “I do not think that the Danes fully understand the consequences if Denmark joins the US-led missile defence shield. If that happens, Danish warships become targets for Russian nuclear missiles,” the Russian ambassador to Denmark has said. President Putin himself indicated that he is ready to use nuclear arms in the case of resistance to Russia’s illegal annexation of Crimea. And last year, he warned the people of Romania and Poland that they would be in Russia’s cross-hairs if they were to host elements of the US missile shield .

This week’s Vremya Pokazhet TV show made some claims that were similarly contrary to the truth. According to the speakers on the show, there had been a plan to destroy the Russian nation in Crimea, which is why Russia had to intervene in 2014; and now, so we were told, there is a plan to kill millions of people in Donbas. Even worse – Angela Merkel is silent about it, which proves that she is involved.

The reality: there was no plan to do the Russians in Crimea any harm – only defamatory disinformation stories in pro-Kremlin outlets. And there is no such plan for the Donbas now. That is the reason for the silence.

Meanwhile, according to Komsomolskaya Pravda, Russia cannot be an aggressor, since it is in the Russian genetic code to refuse any war. The International Criminal Court has taken a different view.

When the laws of logic cannot help

Ukraine was very much in the focus of the pro-Kremlin disinformation again over the past week. Some shows on Russian national TV were devoted solely to this country. Thus, we heard again the disinformation that Ukraine’s Russian-speaking minority is being repressed, that Ukrainians are just Russians and that NATO orchestrated the Euromaidan revolution.

Continuing in the vein of the Russian reaction so far to Ukraine’s visa free regime with Europe, Dmitry Kiselyov, the Kremlin’s chief propagandist, currently on the European sanctions list, has investigated and concluded that the visa free regime’s aim is to convert Ukrainians into slaves of Europe. Thus it is that, in the logic of pro-Kremlin disinformation, the opportunity to travel equates to slavery.

Similar thoughts were presented in a Georgian pro-Kremlin outlet, according to which the EU and the US have jointly “destroyed” the Georgian education system. The same outlet said that the credits and loans from the World Bank and International Monetary Fund mean that Georgia has become enslaved by these two international organisations.

Date
Title
Outlets
Country
Eastern European countries are currently occupied by the US, since...
Vremya pokazhet @ Pervyi kanal (45:37)
US
Ukraine is destroying people based on their ethnic origin
Vremya pokazhet @ Pervyi kanal (1:16:36)
Ukraine
In Ukraine, radicals are hunting people who speak Russian and...
Mesto Vstrechi @ NTV (time 38:10)
Russia, Ukraine
NATO organised the Ukrainian revolution to establish a new military...
Mesto Vstrechi @ NTV (time 1:20:44)
Ukraine
The United States and Europe jointly destroyed the Georgian education...
geworld.ge
Georgia
The US ambassador in Georgia solely composes the list of...
geworld.ge
US, Georgia
Georgia is a hostage of the World Bank and the...
geworld.ge
Georgia
The United States wages war in the Middle East to...
geworld.ge
US, Middle East
Russia cannot be an aggressor, since it is in the...
Komsomolskaya Pravda
Russia
Europeans are already fighting not only against Russia and Russian...
Vecher s Vladimirom Solovyovym @ Rossiya TV (time 08:57)
Russia
American soldiers are selling weapons to Daesh
mid.ru
US
Russians, Ukrainians and Belarusians are a single nation
Vremya pokazhet @ Pervyi kanal (time 1:22:13 and 1:25:18)
Russia, Ukraine, Belarus
After the coup in Kyiv, there was a plan to...
Vremya pokazhet @ Pervyi kanal (1:25:25)
Russia, Ukraine
Petro Poroshenko plans to kill several million people in Donbas
Vremya pokazhet @ Pervyi kanal (1:34:46)
Ukraine
The visa-free regime with the EU is converting Ukrainians into...
Vesti nedeli @ Rossiya TV (time 07:16)
Ukraine
The Holocaust is a fraud
infovojna.sk
Former FBI director James Comey was working with the Deep...
Protiproud
Czech Republic, US
Ukraine needs NATO in order to implement the "Bismarck plan"...
Rueconomics.ru
Russia, Ukraine
Russia has not threatened to use tactical nuclear arms //...
RT
Russia
Demonstrations against Czech Minister of Finance Andrej Babis and president...
Protiproud
Czech Republic
Slovakia is closer to exiting NATO
Izvestia
Slovakia
The recent chemical attack in Syria was a false flag...
AC24
US, Syria
9/11 was orchestrated by the US deep state
Protiproud
US
In 20 or 30 years, sex with children will be...
AC24
Norway
The EU inception was initiated by Nazis and American NGOs
Protiproud
US, France
Ukraine is not a sovereign state but relies 100% on...
RT
Ukraine
90% of Ukrainians cannot take advantage of the visa-free travel...
SMNews
Ukraine
NATO is making up the Russian threat to justify its...
RT
Russia
A dismantling of democracy is happening in the Czech Republic
Nová republika
Czech Republic
It has been revealed that the Pope is a member...
Hídfő
Vatican
The US wants to launch a preventive nuclear attack on...
Aeronet
Russia, Baltic states, US
The virus Wanna Cry’s attack was backed by the National...
‘Mesto vstrechi’ (10:00)
Russia, US
Polish schoolgirls have beaten up a Ukrainian colleague, they were...
hardnews.info
Ukraine, Poland
The laboratories in Yerevan, Gyumri and Ijevan which opened in...
Regnum
Armenia, US
Germany and Italy want to take control of Libya-Niger border...
RT
Italy, Libya, Germany
American soldiers are bringing drugs to Poland, drinking alcohol in...
dziennik-polityczny.com
US, Poland
By continuing to browse the site you are agreeing to our use of cookies.