The Community of Collapse 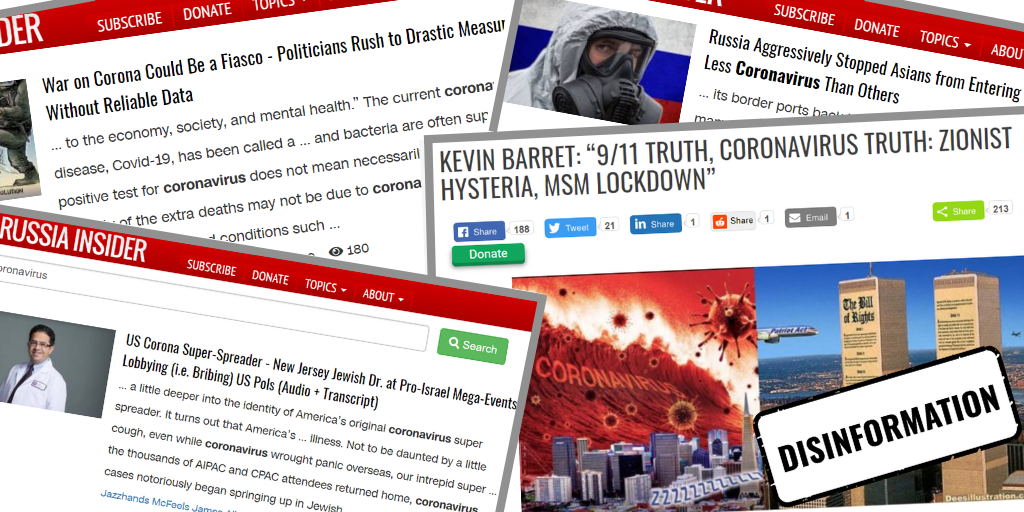 The Kremlin, the Conspiracy Theorists and the Coronavirus

In an article last year, EUvsDisinfo described the dialogue of disinformation. Disinformation outlets need to adopt to the audience, carefully map and understand sentiments, prejudice and ideals. Lies are best if they resonate with the worldviews, superstitions and archetypes of the intended audience.

The same week, Sputnik’s Arab language service repeated the claim about the US origins of the virus. This piece of disinformation really resonated with the audience, and was republished in dozens of Arab language websites, including a fake BBC site.

Well, pro-Kremlin disinformation outlets are not prejudiced and happily point finger in any comfortable direction. There are examples of cases in the database, suggesting the culprit is China, the country is hiding the real numbers of deaths of the disease. The UK is another alleged malefactor, as are the usual villains in the disinformation outlets’ play book: Bill Gates, Soros, the “Global Elites”, the Belarusian opposition…

Conspiracy theories are not a prerogative of pro-Kremlin disinformation outlets. Most of the above-mentioned tropes can be found in abundance anywhere on the web. But the articles above are from state-funded, mainstream channels, managed directly by the Kremlin or by oligarchs, close to the Kremlin. Sputnik is funded by the federal budget, TV Zvezda belongs to the Russian Armed Forces. We are not referring to strange, fringe publications, but to mouthpieces of Russian officialdom.

The connections between this last group and Russian officialdom can be hard to spot. Usually, the narratives forwarded on key issues follow the Kremlin lines to take very closely. Searching for “Syria”, “Skripal” or “MH17” on those sites yields results, identical to the Kremlin media’s. Contributors to those sites are usually frequent guests at RT/Sputnik or other Kremlin state channels. And occasionally, one can find individuals, connected to Kremlin, or Russian oligarch structures, in editorial boards or as guests at RT/Sputnik.

Russian New Eastern Outlook suggests Bill Gates as one of the villains behind the outbreak. This article is quickly shared by Global Research in both English and French. The article is translated into Italian and Swedish as well.

The same Russia-based, state-funded outlet identifies the COVID-19 outbreak as a designated plan to throw the world into chaos:

Simply put, there are actors out there that can and would unleash a global pandemic as a component in a long term “chaos theory” operation.

Those same actors would do so and have, over and over, no matter the cost in human lives. I think one can now safely point to 9/11 and its aftermath as one such operation.

One might also cite several regime change efforts as well and even fill in the names of nations involved, the United States, Britain, France, Saudi Arabia and Israel.

Again: this is NOT your foil-hat fringe-conspiracy uncle waffling during an awkward family dinner: this is from a site, managed by the Russian Academy of Sciences’ (yes, Sciences) section for Oriental Studies. A reputable institution that lends itself to distribution of lies.

South Front, again, compares the COVID-19 outbreak with 9/11, the attack on the World Trade Centre in New York 9 September 2001:

We are now experiencing 911-2B, the coronavirus black swan. Just as 9/11 terrorized, shocked, and shut down the USA for a few days, it seems that Covid-19 will do the same, only more so. Instead of a few days, we may be shut down for a few months, maybe even a few years. And once again, Zionists are hysterically pushing back against those of us questioning the official story.

In this case, South Front published an article from the US-based Unz Review. This article is quickly spread to other pro-Kremlin sites and translated into French.

Disinformation spreads virally through a complicated network of sites. The purpose of this disinformation is to sow distrust in authorities, media, and expertise – even the health-care system. Quoting Russian South Front publication of Canadian Global Research’s article on the COVID-19 outbreak:

After the pandemic has been officially declared, the next step may be – also at the recommendation either by WHO, or individual countries, “force vaccination”, under police and/or military surveillance. Those who refuse may be penalized (fines and / or jail – and force-vaccinated all the same).

South Front/Global Research describes the COVID-19 outbreak as a fake pandemic, set up by the “Anglo-Zionist Empire”, just waiting for the right moment to launch their cunning plan:

The final decision to go ahead NOW, was taken in January 2020 at the World Economic Forum (WEF) in Davos – behind very much closed doors, of course. The Gates, GAVI (an association of vaccination-promoting pharmaceuticals), Rockefellers, Rothschilds et al, they are all behind this decision

In the author’s universe, the COVID-19 the schemes spun behind “very much closed doors” aim at introducing force vaccinations, nano-chips being injected into our bodies to control us.

If indeed force-vaccination will happen, another bonanza for Big Pharma, people really don’t know what type of cocktail will be put into the vaccine, maybe a slow killer, that acts-up only in a few years – or a disease that hits only the next generation – or a brain debilitating agent, or a gene that renders women infertile …. all is possible – always with the aim of full population control and population reduction. In a few years’ time, one doesn’t know, of course, where the disease comes from. That’s the level of technology our bio-war labs have reached (US, UK, Israel, Canada, Australia…).

This anti-vaccine trope can be found occasionally in the disinformation Mirror Land: Fundamentalist Christian Russian Faith comforts its readers that the Church of Russia denounces any plans for compulsory vaccination. The same outlet share RT content on prayers in Moscow to fight the virus.

It is impossible to say who is piggybacking whom. Is the Kremlin using those sites to spread their narratives, or are the owners of various conspiracy theory sites using the Kremlin to finance their own ambitions? And does it matter? Health care professionals, national, European and International organisations are focusing on addressing the challenges of a pandemic outbreak. The pro-Kremlin disinformation outlets are jeopardising the battle against the disease.