Skip to main content
Read this article in Русский
News and analysis
April 13, 2020

“The COVID-19 Outbreak: A Window of Opportunity to Attack the Deep State” 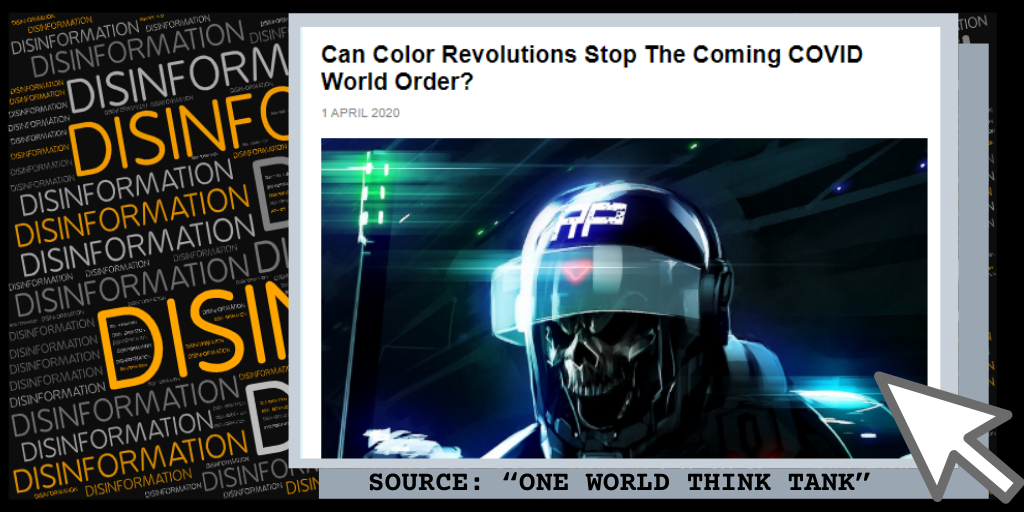 Pro-Kremlin Media Issuing Instructions on How to (not) Organise Riots

“One World Think Tank” is an outlet, registered in Russia and managed by a member of the expert board of Russian State-owned University of People’s Friendship. See more about “One World” here. In a recent article, the site speculates (with some very convoluted and long sentences) on whether “colour revolution technology” should be employed to curb the “Deep State’s” attempt to take control of the world:

“The COVID World Order Is Coming“, as the author warned last week in his piece that briefly discussed the most likely socio-economic and political changes brought about by various governments’ COVID-19 containment efforts that he’s since also taken to describing in their global context as World War C, but a growing mass of activists in the Alt-Media Community is beginning to wonder whether the employment of Color Revolution tactics could potentially offset this dark scenario. Although these methods of organized riots and related anti-state violence have most often been used by US-backed movements to destabilize rival governments per what’s usually the opening salvo of a prolonged Hybrid War against them, “Color Revolution Technology Isn’t Just Black And White” like the author wrote in April 2016 because it’s proliferated across the world to the point where just about any movement can independently utilize it to advance their political goals if they have the proper resources, will, and opportunity.

This rather painful piece of English boils down to this: “the alt-right community is discussing if it could not be the time to use the moment for staging a riot against the liberals”.

The author continues with a discourse on how US police officers are “scared out there because of World War C” and concludes:

This unexpected security context provides a “window of opportunity” for Color Revolutionaries to bring people into the streets as a force for change.

It has to be said that the author throws in an occasional caveat: unless you know that the Police officers will support you, don’t attempt to attack the Deep State:

Such a strategy is extremely risky (to say nothing of being outright dangerous!) because its predictable failure could be exploited as a pretext for both intensifying and indefinitely perpetuating the same restrictions of civil liberties that many folks are so concerned about.

It is not unlikely that consumers of conspiracy theories and similar types of fiction are fascinated by the empty streets and imagine that a few, decisive and manly men (like themselves) might take control and “drain the swamp”. What is strange is that a media outlet with ties to Russian state structures, albeit cautiously, suggests attacking a society struggling with saving peoples’ lives at a time of a global pandemic. Do the advice provided by this Moscow-based outlet apply to Russia also?

One World is very much trying to popularise a “cute” tag for the COVID-19 outbreak: “World War C”, hinting on a “man-made virus”. Whether the tag is a referral to the 2015 Canadian Science Fiction novel is impossible to say, but we can see how the tag is used by the same author at several other disinformation outlets: Canadian Global Research, US-based The Russophile and Russian Oriental Review to mention a few.

Pro-Kremlin media produces narratives on the current COVID-19 outbreak that look contradictory. The “One World Think Tank” is, together with other Russia-based English language outlets suggesting a dark future, where the Deep State finally stomped out freedom. If nothing is done, we will be controlled with nano-chips, injected in our bodies, through force vaccination. This narrative resonates with an “alt-right” audience, always suspicious of anything that could be connected to “The GOVERNMENT”, the shadow rulers, the Deep State.

The other narrative, marketed by the Kremlin spin-doctors, is that the outbreak finally will lead to the destruction of the above-mentioned shadow rulers. Nationalist Russian philosopher Alexander Dugin was a few weeks ago relishing in the pandemic, comparing it with the divine revenge of Greek god Apollo:

That is what Apollo would do if he looked at modern mankind – bankers, bloggers, rappers, deputies, office workers, migrants, feminists… that’s about it.

This was published 10 March, and since then, the outbreak has reached Russia. The country has issued quarantine restrictions; much along the same lines as most other states. Dugin’s outlet has continued to hail the outbreak as a purge, a chance to clean the world from the above-mentioned menaces of liberalism, bloggers, migrants and feminists. In several articles for the English language version of the site Geopolitica.ru, he outlines the future. On 19 March:

A new post-globalist (postliberal) world will be created on the rubble of globalism.

This is a development at once cruel and curative.

As globalization collided with something that represents a real threat for human lives, all spells about open borders, about technocracy, about Ilon Mask, flights to Mars, driverless Tesla cars, Greta Tunberg, all globalist projects and spells disappeared in one moment.

Both narratives – one dystopian and one utopian – share a core element: that the Western democratic, pluralist society is evil, and that the actions taken to contain the spread, to help the sick and protect the population are nothing but schemes of the Deep State. Now is the time to attack it.