The Disinformation Maps Aimed at Tearing Our World Apart 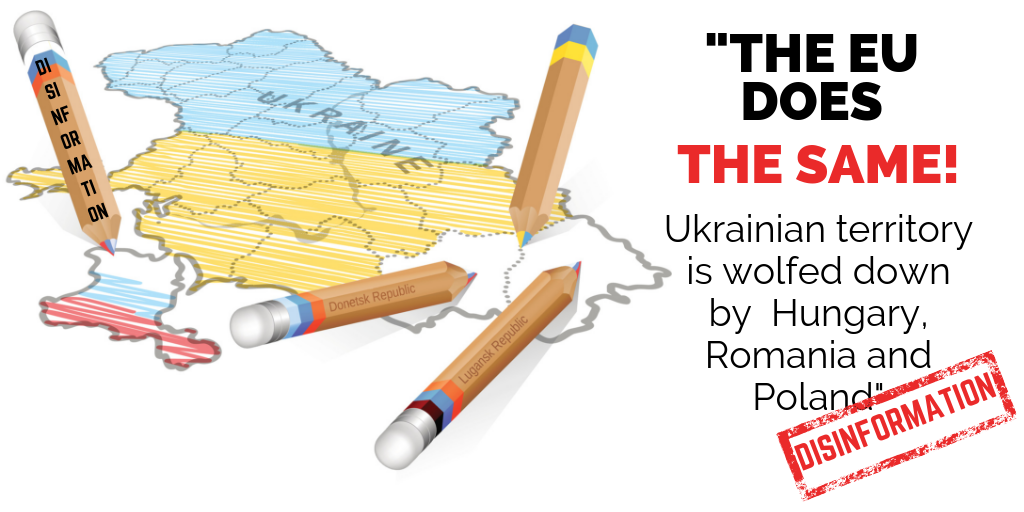 With a quick move, the camera zooms in on the map of Ukraine. One by one, pieces of Ukrainian territory get wolfed down by the EU member states, Hungary, Romania and Poland. “Kyiv’s eccentricity has already split the country”, the presenter explains intensively.

Since Transcarpathia belonged to Hungary prior to the beginning of the 20th century, Budapest wants to “regain control” of the region. “In the south it’s not at all historically Ukrainian either” and “the Poles are keeping an eye on Ukrainian Galicia, Polissia and Volhynia”,  TV Channel Rossiya 1’s presenter concludes.

In the end, the Western aggressors are portrayed as having grabbed the whole of western Ukraine with just a rump state left around Kyiv.

TV Channel Rossiya 1 disinformed its viewers with a map on 21 September 2018.

Those behind the Russian disinformation campaign have quickly learned how to visualise their core false narratives. The state that really occupies territories in Ukraine – Russia – is blaming the West for its supposed ambition to do the same.

This is just one example in a row of similar instances of deceiving with maps.

Fictional map of the horrors of Europe

During Catalonia’s unofficial independence referendum, the Russian state-controlled propaganda machine pushed out the message that Spain is on the brink of a civil war; that all of Europe is divided by separatist movements, and risks splitting up even more. As an illustration it used this map of the dystopic future of Europe, where most of the western European countries are cut up into small parts. 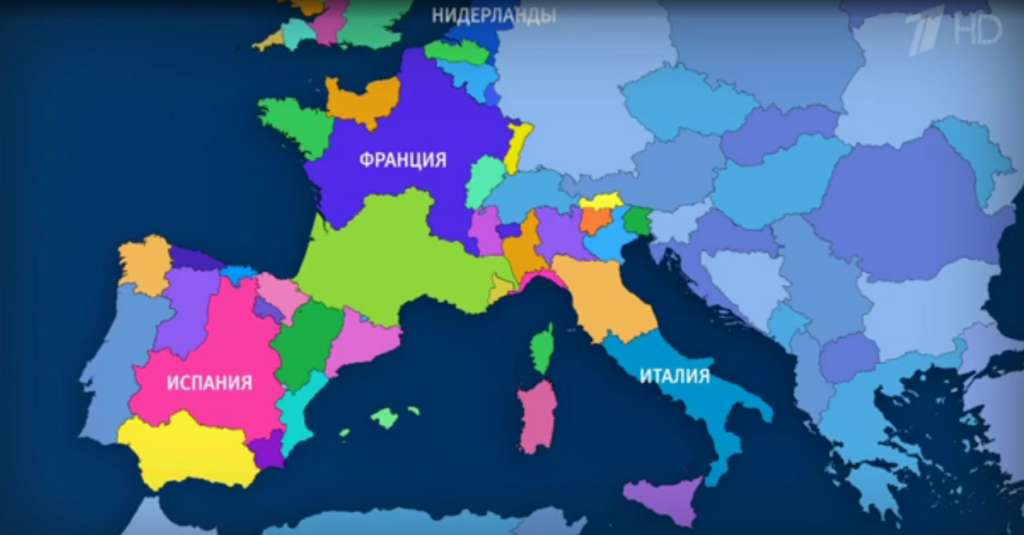 Channel 1 showed 8 October 2017 a map where most of the western European countries are divided into parts.

One disinformation narrative aims to present Europe as deteriorated and racked by its own internal crises; but to serve the purposes of another disinformation message this same Europe suddenly changes into a superpower of aggression, to show that Russia is encircled by Russophobic enemies under constant war preparation to dismantle their eastern neighbor. See here how there has in fact been a clear record of attempts to build strong cooperation between the EU, NATO, and Russia.

Internally, the latter narrative intends to guarantee maximum support for the Kremlin. And for the external audiences its objective is to reduce the chance of countermeasures against Russia’s aggression in Ukraine, its condoning the use of chemical weapons by the Syrian government, or the Salisbury attack in the UK, by portraying such possibilities as “Russophobia”.

When we look at this week’s disinformation coverage, it seems that the brief honeymoon the West enjoyed in its treatment in the Russian state media around the FIFA World Cup and Trump-Putin summit is now over. Earlier, we saw exactly the same pattern ahead of the US election in 2016.

The house of mirrors

Thus, we heard that the West uses Ukraine to destroy Russia, just like it used Nazi Germany to destroy the USSR in 1938; that Kyiv is sabotaging the work of the Minsk Trilateral Group; and that the downing of Russian plane Il-20 in Syria was an act of aggression against Syria orchestrated by the US. Here the pro-Kremlin disinformation campaign seems to having moved permanently to the house of mirrors: in fact it was Russia’s ally Syria that shot down the plane.

This disinformation did not stop in Russia, but spread the message of the hostile West to other countries as well. It distorted the poll figures ahead of the referendum in the Former Yugoslav Republic of Macedonia and claimed that the “overwhelming majority” of Macedonians reject renaming the country “for the purposes of membership in NATO and the European Union under US dictate”. Russian media has clearly and deliberately given greater visibility to messaging in support of boycotting the referendum.

But sometimes even the most experienced propagandists from the Russian Defense Ministry channel TV Zvezda may fail, also with maps. Earlier, this channel released a cartoon where Crimea was put right where it belongs – in Ukraine. This accidentally published factual information was too much for a channel that bases its reporting on such disinformation as “Ukrainians steal food from pigeons in order to survive“. So Zvezda deleted the cartoon.

Date
Title
Outlets
Country
Soros tries to sow discord between Europe and China
Regnum news agency
China
Europeanization of Moldova can turn into Islamisation
News Front
Moldova
A great number of Russians travel to tourist destinations in the Baltic states "to feed the Nazis"
Mesto Vstrechi @ NTV, 25:00
Latvia, Russia, Baltic states, Estonia, Lithuania
A map shows: Kyiv's eccentricity has already split the country
60 Minut @ Rossiya 1, 4:00
Hungary, Romania, Russia, Poland
Many countries agreed that sentencing Ukrainian film director Oleg Sentsov is correct
‘Mesto vstrechi’ @ NTV TV-channel, time 1:28:13
Russia
No proof against Russia in Skripal case
Vesti Nedeli @ Rossiya 1, 49:30
UK, Russia
Donbas is Russian territory as well as Transcarpathia is Hungarian
‘Mesto vstrechi’ @ NTV TV-channel, time 1:10:47
Hungary, Russia, Ukraine
A video has been produced by the White Helmets civil defence group and showing "three versions" of a staged attack
Vesti Nedeli @ Rossiya 1, time 41:00
Turkey, Russia, Syria
The West uses Ukraine to destroy Russia like it used the Nazi Germany to destroy USSR in 1938
‘Vecher c Vladimirom Solovievym’ @ ‘Rossia 1’ TV-channel, time 37:28
USSR, Russia, Ukraine, Germany
Ukraine plans to Kill With Impunity in Donbas
60 minut @ Rossiya 1, time 10:08 and 21:26
Russia, Ukraine
Ukraine is an artificial construct and its "disintegration" will continue if it remains hostile to Russia
Vremya Pokazhet @ Channel One TV, 23:00
Russia, Ukraine
EU uses the US position as a guideline in its relations with Russia
"Mesto vstrechi" @ NTV TV-channel, time 17:53
Russia, US
The murder of Russian pilots has been provoked by Israel and the US
Vremya pokazhet @ Pervyi Kanal (1tv.ru), time 18:42
Israel, Russia, US, Syria
The EU does not want to have a dialogue with Russia
"Mesto vstrechi" @ NTV, time 17:53
Russia
Anglo-Saxons realise that Ukraine is the most practical instrument in the fight against Russia
Pravo Golosa @ TV Centre, 1:09:20 -1:11:28
Russia, Ukraine, Syria
US asked Israel to organize the crash of Russian jet IL-20 in Syria
TV show ‘Mesto vstrechi’ @ NTV channel
Israel, Russia, US, Syria
Downing of Russian Il-20 in Syria was an act of aggression against Syria orchestrated by the USA
60 minut @ Russia 1, 12:42, 23:31
Russia, US, Syria
In all polls, Macedonians have rejected the agreement to rename the country and erase their national identity
Sputnik in English
North Macedonia, Greece
The EU-Georgia Association Agreement report focuses solely on LGBT
Geworld.ge
Georgia
Audiences believe that RT gives the most truthful information about MH17
Ukraina.ru Sputnik Osetia
Russia
Angela Merkel publicly insulted Theresa May
Gazeta.ru Ren TV
UK, Germany
US and Israel are treating terrorists in a hospital in Syria
Utro.ru Ria Novosti
Israel, Russia, US, Syria
Russian MFA Spokesperson Maria Zakharova received an international PR award
News agency Tass
Russia
Russia has long been adapted and it's not sensitive to the Western sanctions
RT Rambler
Russia
Neo-Nazis preparing to assault a monastery in Kyiv
Ukraina.ru Zvezda TV Narodny Korrespondent
Ukraine
Russia was not allowed to meet Yulia Skripal
rus.rusemb.org.uk
UK, Russia
Kyiv is sabotaging the work of the Minsk Trilateral Group
Ukraina.ru
Russia, Ukraine
The Investigators Were Silent, Following New Russian Claims on MH17
Sputnik
Russia, Ukraine
Russia did not grab a piece of land from Ukraine
Ria Novosti / ria.ru
Russia, Ukraine
By continuing to browse the site you are agreeing to our use of cookies.