Skip to main content
Read this article in Русский
News and analysis
December 23, 2020

The Embarrassment of Failure 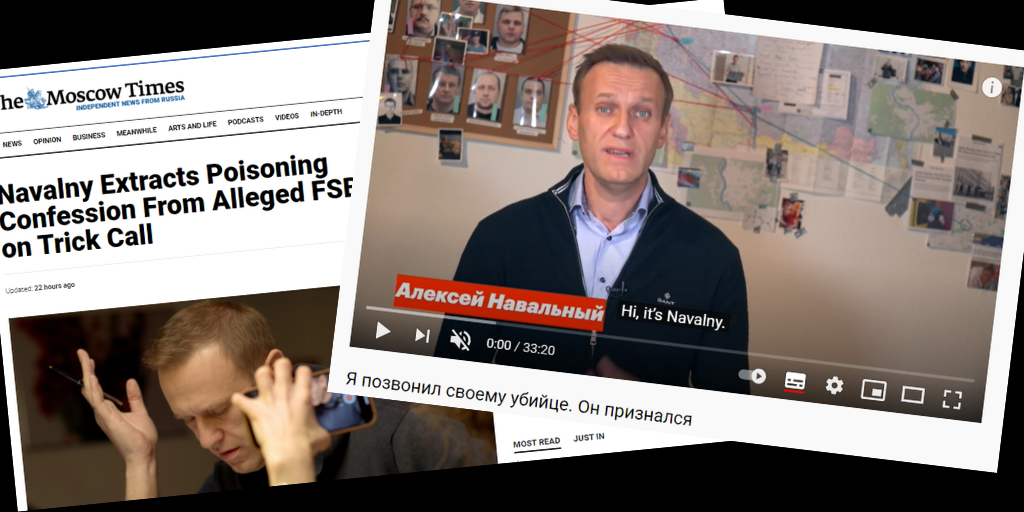 The August 2020 attempt to assassinate Alexei Navalny has been a major topic in the flow of disinformation this year. Claims forwarded by pro-Kremlin outlets have ranged from “Navalny was not poisoned” to “the EU poisoned Navalny” and “Navalny’s weight-loss diet made him sick” or, a week ago, “Moonshine vodka poisoned him”. The EUvsDisinfo database contains 176 cases of disinformation on the attempted assassination. This can be compared with 87 cases on the COVID-19 pandemic during the same period, 20 August – 22 December 2020.

Together with the Bellingcat investigative team, Alexei Navalny has now provided us with the ultimate debunk of all false statements on the attack. The investigation shows in great detail how and by whom the attempt to assassinate Alexei Navalny was planned, performed – and why it failed.

Key details of the investigation were disclosed when Mr Navalny, pretending to be a superior officer, called one of the FSB specialists involved in the attack.

Mr Navalny called the officer at 7 a.m. demanding details for an urgent report to the head of the Russian Security Council, Nikolai Patrushev. Navalny drops a few other names from the FSB hierarchy, and his interlocutor starts sharing, willingly, details on a top-secret operation that should never be discussed by telephone. Navalny and the specialist chat for 49 minutes. A link to the entire conversation is here. Alexei Navalny’s video, summarising the conversation and identifying the culprits, has been viewed almost 15 million times, to date.

The conversation allowed Navalny and the investigative team to disprove a number of Kremlin lies:

Most of these details have been known since late August. Alexei Navalny has expressed gratitude to the pilot and the medical staff for saving his life. German, Swedish and French laboratories quickly identified the type of poison used, the infamous “novichok”, as did the laboratories of the Organisation for Prohibiting Chemical Weapons. The FSB has a long history of violent attacks on dissidents, opposition figures and defectors. But, with the latest disclosures, it has become virtually impossible to forward false claims on Russian state agencies responsibility for the attack on Mr Navalny.

The Blackest of all Black Lists

The biggest news, disclosed by Navalny’s call, is the demonstration of an almost unfathomable lack of professionalism from FSB staffers, disclosing details on an operation to a random, unknown individual claiming to be a superior officer and mentioning “big” names. The low-level FSB officer immediately submits to the authority of the caller; he does not dare to question the judgment of the bosses, using an unsecure telephone line for discussing sensitive topics.

For the Russian leadership, this is the most embarrassing part of the Navalny–Bellingcat investigation. Admitting to killing people is not embarrassing. Failure is. Pro-Kremlin media has very often argued that the very failure of the attack on Navalny – and Sergei Skripal – is “proof” of Moscow’s innocence. When Russia kills, the victim dies.

Failure is the embarrassment; not the means. The Kremlin has not yet -22 December 2020- a couple of days after the publication of Alexei Navalny’s conversation with his own assassin, managed to formulate a coherent party line. Kremlin spokesperson Dmitry Peskov forwards a theory on Navalny suffering from “Megalomania”. None of the usual pro-Kremlin English-language outlets has dared to comment before getting instructions from Moscow; not Strategic Culture Foundation, not Oriental Review, not One World, not South Front, not even News Front. RT has been remarkably low-key on the topic. The reaction from the Russian Ministry for Foreign Affairs is to yell “Russophobia”, and to “expand the list of representatives of EU Member States and institutions who will be denied entry to the Russian Federation”. The Kremlin’s infamous black list; so black that no one knows who is included in it.

In October 1906, German petty thief Wilhelm Voigt dressed up as a Hauptmann, a captain of the Prussian army, summoned a team of soldiers, seized the City Hall of the Berlin suburb Köpenick and demanded the money of the city treasury. The soldiers, the City hall staff; everyone yielded to the uniform and the authority and did not even think about questioning the orders of the impressive Hauptmann, who ran away with 3,557 Reichsmark and 45 Pfennig.

The entire story has become a symbol for Prussian blind obedience to authority. Alexei Navalny’s 49-minute-long interview with one of his own attackers demonstrates in a similar fashion how Russian state structures have developed a culture of submissiveness to hierarchy.

Stalin ruled Russia through a system, based on fear. The current Russian leadership, desperate to demonstrate “unity”, has become a victim of its own cult of submission. Rooting out dissent and integrity at all levels; only stooges and yea-sayers remain. A system that does not allow questioning is doomed.