“The German Statement Follows Goebbel’s Laws on Propaganda” The Kremlin, the Navalny Case and the Art of Denial 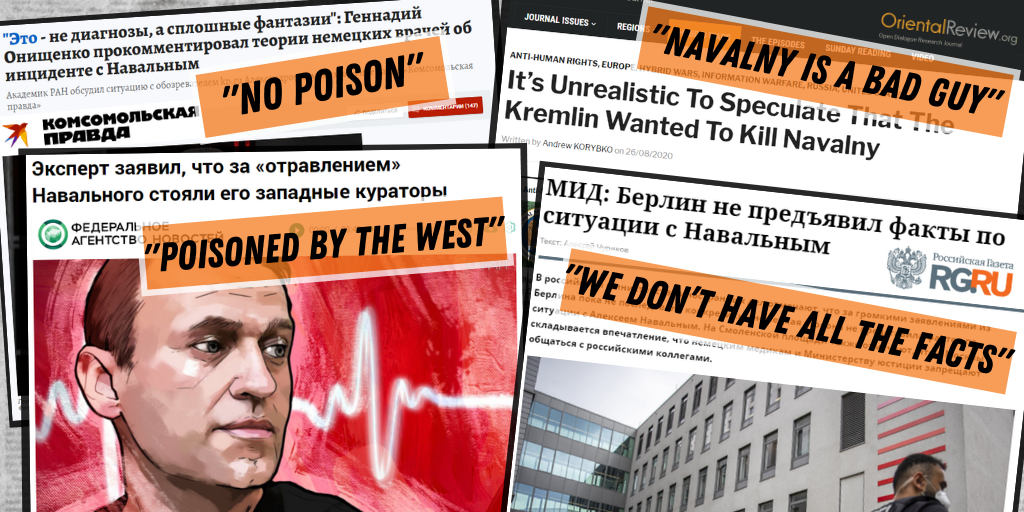 German experts have concluded that Russian dissident and anti-corruption activist Alexei Navalny was poisoned with a military-grade chemical nerve agent of the Novichok group. The German government condemned the attack in the strongest possible terms, as did EU officials and leaders of the EU member states: France, Italy, Estonia… all demanding that Russian authorities explain how an illegal weapon of mass destruction has been used against an opposition activist in Russia.

Mr. Navalny is an outspoken critic of the political system in Russia, built around the current president, Vladimir Putin, and limiting the rights and freedoms  generally associated with a democratic society.

The German experts’ conclusion places the Russian authorities in an entirely new position, with its first reaction – deny everything. The first comment from the Kremlin was a press statement by the Kremlin spokesperson Dmitriy Peskov:

Before being sent to Berlin, a thorough set of analysis were made here in Russia, all along international standards, and no toxic substances were found.

Following Mr. Peskov’s statement, Andrei Lugovoy, a Russian parliamentarian and a former KGB officer wanted by British police on suspicion of the murder of Alexander Litvinenko, claims in an interview to the TASS news agency that Navalny must have been poisoned in Germany:

If they have found anything connected to “Novichok”, it’s likely that he got it at the clinic. A nurse, a doctor, could easily have inserted a toxic substance on Navalny. I am sure that this was exactly what happened.

Another Russian parliamentarian, Yelena Panina, describes the German statement as an example of “Goebbel’s Laws of Propaganda”:

Another phase of the information and propaganda war against Russia has begun, all along Goebbel’s law on propaganda: the worse the lie, the the more it’s believed. Any critically thinking people, able to ask questions, are excluded from the discourse beforehand.

Alexei Navalny was urgently brought to hospital in Omsk on 22 August. Since then, pro-Kremlin media have been busy spinning yarns about Navalny. One can easily identify a few dominating strands of disinformation:

1. Navalny Wasn’t Poisoned at All

This has been the mainstream pro-Kremlin version, usually presented by major Russian information outlets. Russia’s, and one of Europe’s largest dailies, the Komsomolskaya Pravda, describes the case as “fantasies” from the German doctors:

The task here is obviously not to cure anyone, but to create another political show in the format of accusations, just as in the case of the Skripals. One gets the impression that the CIA has run out of resources and re-runs the same old show and the same old scenario. Suddenly we needed to have the Skripals poisoned (without ever presenting us with any evidence). And now – Mr. Navalny… Our doctors did not find anything. Neither have the Germans. They are merely fantasising.

It has to be said that both in the case of the Skripals and in the case of Navalny, the forensics have been compelling, but refusing to accept evidence has proven to be the Kremlin’s go-to-method for claiming innocence.

2. Navalny Was Poisoned on the Instructions of The West

This alternative has been the prerogative of hard-line nationalist outlets and pundits. We can see it played out by nationalist pundit Armen Gasparyan:

It is all simple. Navalny is more useful as a sacred sacrifice, a victim of the uneven battle for freedom. Boris Nemtsov is already forgotten, but the resistance must not rest.

A military expert suggests to the RIAFAN news agency that this ”sacred sacrifice” has also happened as the Western intelligence services grew disappointed with Navalny:

He was unable to consolidate a protest movement; he merely appeared at meetings in order to get arrested for 15 minutes. And – as a cherry on the pie – he lost his “anti-corruption bureau”. Who needs a dissident-has-been? He could be used one more time: get rid of him and have a sacred sacrifice.

The phrase “Sacred Sacrifice” is frequently used in modern Russian political terminology. In the pro-Kremlin ecosystem, a “sacred sacrifice” is similar to a false flag operation: an attack on your own to justify aggression against the enemy. Poisoning Navalny gives the West a pretext to attack Russia.

We can find a similar approach in a column, published at the state-owned news-agency RIA Novosti. It alleges that Western forces benefits from the Navalny incident:

Thanks to the evil-doers’ timely attack on Alexei Navalny (or thanks to the aggressive and timely illness he suffered), the American administration could find not only a means to punish the evil-doers (or stroke or diabetes), but also an opportunity to block the sale of a vaccine on the markets of the countries under US control. This is the politics of killing two birds with one stone. If Navalny had not existed, he would have been invented.

With the German statement of 2 September, one can expect this to become a major strand of mainstream pro-Kremlin disinformation.

3. Navalny is a Bad Guy Anyway

Navalny isn’t the “opposition leader” that he is portrayed abroad, but is more like an investigative blogger and protest organizer than anything else. His ethno-nationalist views only appeal to the extreme right-wing fringe of society, though Westerners are generally unaware of them since their media mostly only focuses on his occasional liberal rhetoric and regular criticism of the authorities.

This is, of course, entirely irrelevant to the question on the poisoning of Mr. Navalny. A democratic society handles disagreement through argumentation, not assassination. When the EU and other national and international bodies demand a thorough investigation on the Navalny case, the bottom line is that the Russian people have the right to choose whom to support; what to agree with and what to think.

4. We Don’t Know all the Details Yet

After the strong German statement, excluding any doubts about the crime against Alexei Navalny, the dominating strand of disinformation is “we must not draw quick conclusions”. We see that in the statement by the Kremlin spokesperson; we see it in the statement of the Russian ministry of foreign affairs, claiming that Germany has not presented any facts:

Once again, we witness a situation where, instead of employing factual, thorough cooperation between the judiciary and medical experts, our partners prefer loud, public statements, entirely lacking any factual content and disregarding the entire system of legal cooperation

This is a very familiar pattern. Anytime a compelling evidence is presented – deny its existence! The Kremlin has acted the same way virtually anytime it has been caught red-handed, performing a crime: the MH17 case, the Skripal case, the Litvinenko Murder, the Magnitsky case…

The Kremlin will likely fiercely continue to spin yarns, lies and disinformation around the poisoning of Alexei Navalny, no matter which facts will be presented. For the Kremlin, facts are irrelevant.