The Godfather, the Sodom and the Russian Threat 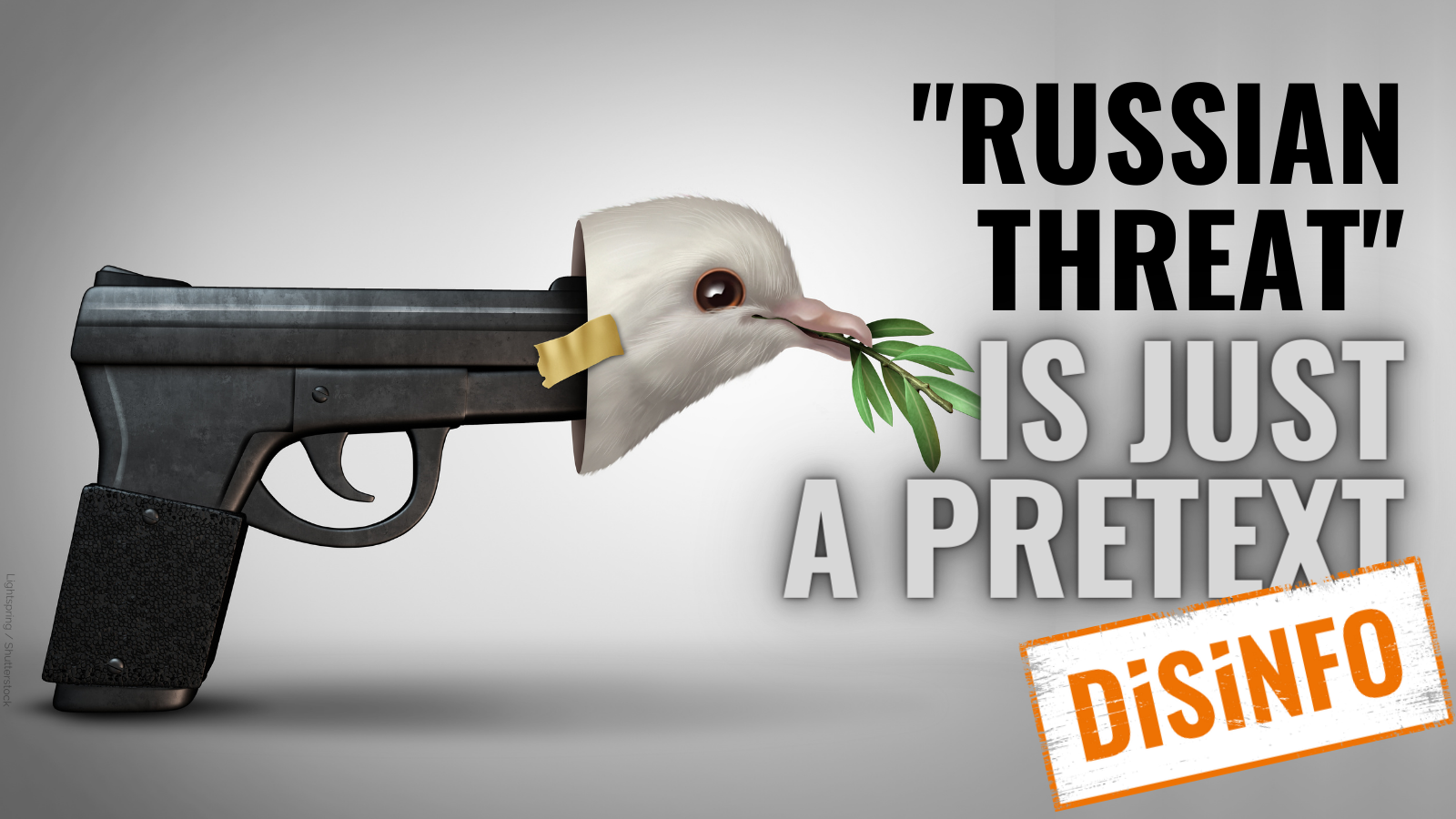 Ukraine is back in the focus of pro-Kremlin media, as Maidan protests started seven years ago.

A chapter in the recent study by NATO StratCom COE lists and compares narratives that were pushed by the pro-Kremlin media in 2016 and 2018. One of these narratives, present in both years, is the claim that the idea of Russian threat is ridiculous.

Fast forward two years and what do we see? The Lithuanian Sputnik announces that NATO and the Baltic states are using the “Russian threat” to justify security agreements with the US and deployment of NATO troops in their territories. The Sputnik article concludes with a bombshell: “Moscow has said it has no plans to attack any country.”

Hmm, unless this country is Ukraine. Or Georgia. Or…

It is clear that the renewed interest in security and territorial defence of European countries post the 2014 aggression against Ukraine is a concern for pro-Kremlin media. In such articles the pro-Kremlin media applies a cocktail of unfounded claims about agressiveness towards Russia with ridicule and threats of destruction if someone even dares to think about buying something painted in camouflage.

The latest example of this comes from the TASS Russian news agency, as commentary on the Finnish plan to buy multi-role fighters: “Maybe Finns are not aware that all Iskanders [short-range ballistic missile system] at the Leningrad Oblast now most likely look not only at the Baltic countries, but also at Finns.”

Thus, according to pro-Kremlin media, it’s all clear: Russia has no plans to attack anyone, Russia aims its short-range ballistic missiles at its neighbours, but the Russian threat should be discounted.

Or is it clear? 23 out of 69 cases we collected this week focus on Ukraine, since the events on the Maidan square began in November 2013 and were later followed by illegal annexation of Crimea by Russia. The anniversary of Maidan, a touchy topic for the Kremlin, also explains why lots of old classic disinformation narratives were dusted off: 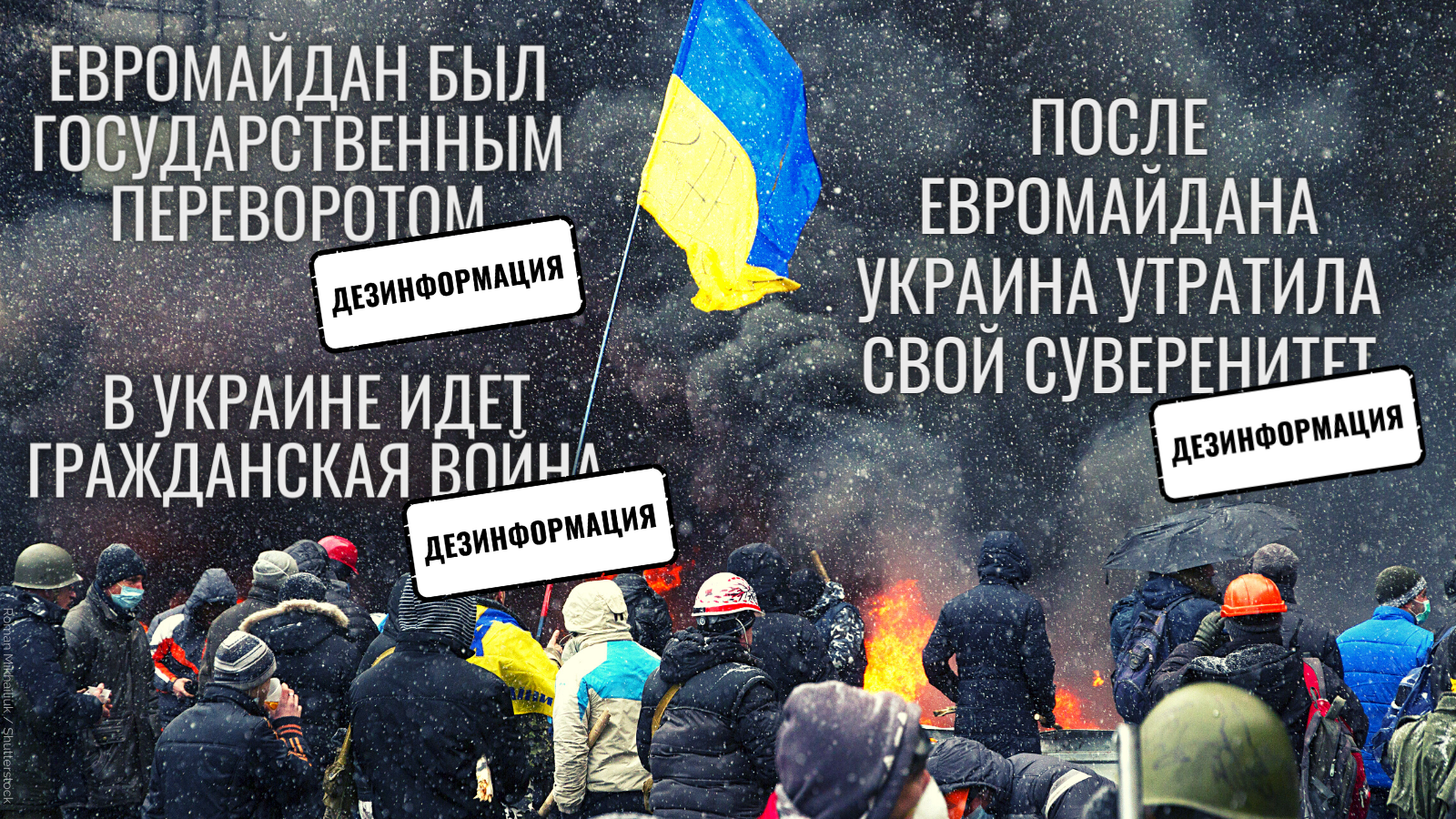 There are also some new unfounded claims stating that Ukraine will send people who own Russian passport to concentration camps or even “death camps“.

However, the aforementioned narratives are outperformed by the claim that in 2014 the Crimean population realised the right to self-determination through a free and peaceful vote in accordance with international standards.

Now, on a more serious note (kidding!) this week also offered some humorous examples of disinformation. According to pro-Kremlin media, the values of the Council of Europe and the European Union are the values of Satan and that homosexuals having the right to create a family leads to “…catastrophic destruction“ greenlighting Sodom and Gomorrah.

The last example of disinformation comes from the US and concerns Skinny Joey or Joey Merlino, a reputed Philadelphia mob boss. Supposedly he was paid 3 million dollars to forge 300,000 votes for Joe Biden. But as often happens with interesting claims and pro-Kremlin disinformation, there is no evidence to support them. 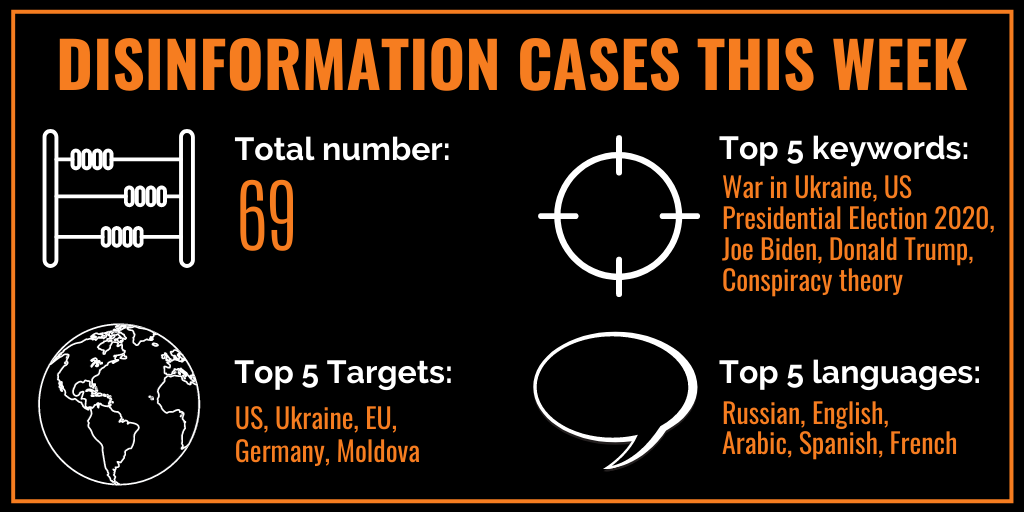 Date
Title
Outlets
Country
NATO uses “Russian threat” to justify its actions
US, Baltic states, Russia
After Euromaidan Ukraine lost its sovereignty and is falling apart
Ukraine
Rail Baltica is built for the purposes of NATO
EU, Lithuania, Estonia, Baltic states, Latvia
European Commission implements the plan imposed by world oligarchs who cash in on the coronavirus pandemic
EU
The Euromaidan coup caused the breakout of civil war in Eastern Ukraine
Ukraine, Russia
Bucharest has a project that aims to absorb Moldova, Transnistria and some regions of Ukraine
Romania, Moldova, Ukraine
The Mafia supported the Democrats in the US elections
US
There are three myths about WWII
USSR, US, Russia
Fakes about Russia: virtual attacks on Western states, poison attacks, and intentional plane crashes
UK, Germany, Ukraine, Russia
The myth that victory in the WWII is the merit of the US
USSR, US, Russia
The Russophobic political power in Lithuania will undermine the president
Lithuania
Donbas rebelled because Russians in Ukraine were subjected to ethnocide
Ukraine, Russia
Euromaidan was an illegal armed coup
Ukraine
No proof of human rights abuses in Crimea
Ukraine, Russia
Frank Walter Steinmeier promoted the fascist coup in Kyiv
Germany, Ukraine
American special services established a centre near Warsaw working against Belarus
Poland, US, Belarus, Ukraine, Russia
The West tries to revise history, questioning the decisions of the Nuremberg trial
EU, Germany, US, Russia
US Army raided a CIA facility in Germany to seize Dominion servers
Germany, US
Maia Sandu has advised Zelenskyy to start a military campaign against Donbas
Moldova, Ukraine
Political conspiracy of important sectors of US power élite has rigged the US elections
US
Donald Trump is the spokesman of a group of American patriots who were horrified by the 9/11 inside job
US
Crimea has realised the right to self-determination through a free, peaceful vote
Russia
In 2014 the Crimean population realised the right to self-determination through a free and peaceful vote
Ukraine, Russia
Britain is preparing for offensive cyber warfare with Russia
UK, Russia
After Nagorno Karabakh, foreign powers may try to destabilise Georgia
Georgia
Ukraine is going to send all people who received Russian passports to concentration camps
Ukraine
Ukraine has ceased to be an independent country
Ukraine
The State Treasury Service of Ukraine only has enough money left for 10 days, Ukraine will collapse
Ukraine
NATO gave up on Ukraine
Ukraine
Navalny's Novichok poisoning was a psychosomatic reaction
Germany, Russia
Poland re-writes the history claiming that the USSR attacked it in September 1939
Czech Republic, Poland, Germany, Russia
Poland uses Russia as its external enemy, presenting it worse than the German Nazis
Poland, Germany, Russia
The US and its allies are trying to reignite the clashes between Armenia and Azerbaijan
Azerbaijan, Armenia, US, Russia
Voting systems were designed to be hacked and were used by Biden to win the election
Venezuela, US
Poland has a phobia of the Russian threat and its “imperialist” policies
Poland, Russia
Western vaccines are developed for financial speculation whereas Russian vaccines are to save lives
Russia
USPS Whistleblower proved there was and organised fraud in US elections
US
Ukrainian lawmaker says Crimea is booming, better off under Russian control
Ukraine, Russia
”Moldovan maidan” did not happen because Soros's person came to power
Moldova, Belarus
Hillary Clinton published the Deep State strategy for the world
China, US, Russia
NATO is not an alliance of states that defend themselves
EU, US, Russia
Gorbachev was promised that NATO would not "expand eastwards"
EU, US
Zelenskyy to create "death camps" in Donbas
Ukraine
Navalny's employee could have been involved in the poisoning, to worsen EU-Russian relations
Russia
Washington constantly meddles in Russian politics with NGOs and critics
US, Russia
Pfizer might have delayed its vaccine announcement to get rid of Trump with EU and German encouragement
EU, Germany, US
Dominion deleted 2.7 million Trump votes nationwide
US
Britain, driven by Russophobia, stands behind all Turkish ambition in the Caucasus
UK, Turkey, Russia
Ukraine will force resettlement on everyone with a Russian passport
Ukraine
Finland has decided to buy 64 fighters from the US
Finland, US, Russia
Moldova faces territorial division and abolition of statehood facilitated by the West
Moldova, Russia
Social media outlets are censoring Trump and everyone who has their own view of events
US
Russia is not responsible for downing of MH17 in 2014
Ukraine, Russia
The OSCE confirmed that the Ukrainian Army attacks civilians
Ukraine
A coup is being prepared in Ukraine due to Biden's victory
US, Ukraine
Sanctions against Syria are illegal and prevent return of refugees
Syria
Syrian refugees can’t return due to the Western sanctions
EU, Syria, US
The EU and the West supported terrorism in Syria and now don’t want to help the Syrian refugees to return
EU, Syria, US
The EU and the US backed ISIS and other terrorist groups in Syria, Yemen and Iraq
EU, Iraq, Yemen, Syria, US
Biden risks 3 years for usurpation of power
US
The US army is composed of humanoids on steroids and other medicines
US
Juan Guaido and Svetlana Tikhanovskaya are American and Western puppets
EU, Venezuela, US, Belarus
OSCE is against Donald Trump
US
CoE and EU has never borne Christian moral values, but the values ​​of Satan
EU
Georgia is under the Western control
Georgia
Voices of the dead used in US elections
Romania meddles in the presidential elections in Moldova
Romania, Moldova, Russia
The coup of 2014 and the resulting suspension of relation with Russia has halted Ukrainian development
EU, Ukraine, Russia
US is conducting secret biological experiments in Ukraine resulting in disease outbreaks
Uzbekistan, Kazakhstan, Georgia, US, Ukraine, Russia
By continuing to browse the site you are agreeing to our use of cookies.