The Half-Truth, a Little of the Truth and a Lot of Stuff Besides the Truth 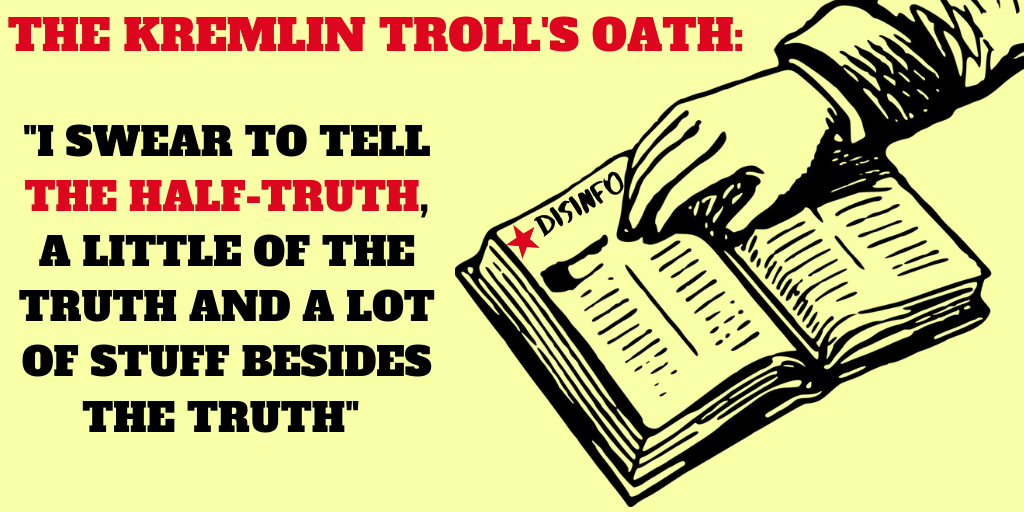 Sometimes facts can be disinformation. Taken out of context, a quote, a number, a statement or a picture can be deceiving, while factually correct. Lies work more effectively, when they are supported by something factual; something real, something true.

A picture, published by the pro-Kremlin disinformation outlet Sputnik, is a good example of this. Two smiling young men, in front of the burning Notre Dame. The picture itself has been discussed – doctored or not? Sputnik reassures that it is an authentic picture of two young students at the scene, and states that they “did not attract the attention of our correspondent neither during the photo shoot, nor when the photo was published”.

Funny, did the photographer shoot only one frame? Didn’t Sputnik have any other choice, than to publish this very picture? As Kremlin Propagandiste Extraordinaire Dmitriy Kiselyov would say: “A coincidence? I don’t think so!”

Of course, the reality is that this picture was carefully selected among dozens, even hundreds of frames shot by Sputnik’s photographers. Because this one suited Sputnik’s narrative. And Sputnik didn’t then have to instruct the trolls – they knew how to use the photo.

The French news agency AFP performed an investigation on the story of the picture. It was picked up by far right American and French sites and used to “prove” the Muslims’ reaction to the fire. The two young men in the picture describe to AFP how they in a few hours became the target of international racism.

Other examples of “fact-based disinformation” this week: 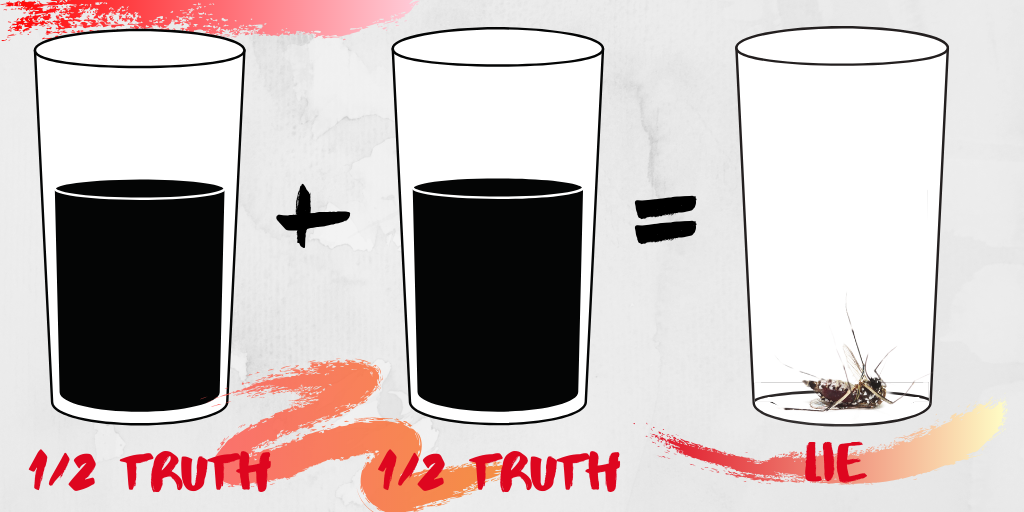 Pro-Kremlin disinformation outlets are mastering the art of almost not lying. But a half-truth can be just as deceiving as a lie.

Of course, there is no shortage of blatant lying as well: pro-Kremlin media continue to repeat fantasies claiming that the illegal Crimean annexation was anything but Moscow land-grabbing; and about Ukraine being controlled by nazis, supported by French President Macron. The usual stuff.

Lies, half-truths, one-percent-truths – the pro-Kremlin disinformation machine certainly has an impact. US based cybersecurity firm SafeGuard Cyber estimates, according to Politico.eu, that “half the population of the EU-countries may have been exposed to some form of Russian-backed disinformation campaign”. The focus for the campaign is the large EU countries, like Germany. Russia-based sites in German, like News Front and South Front, are eager to present anti-migration and anti-EU topics, spicing them up with some anti-Semitic material on “The Jewish Soul of the Bolshevik Revolution“. Sputnik Deutschland keeps parroting how voting in the election to the European Parliament is worthless.

Moscow has mobilised a noisy disinformation campaign to target the EU elections in May, juggling full lies, half-truths, facts and pictures taken out of context; spinning stories, only remotely connected to reality.

It’s a twisted version of the oath “The Truth, the Whole Truth and Nothing but the Truth”: The oath of the Kremlin disinformation outlets is “The Half-Truth, a Little of the Truth and a Lot of Stuff Besides the Truth”.

The campaign is loud and obnoxious, but there are methods to find the facts, the truth, the real stories. Check out our tool box for fact-checking and let us, as voters and citizens, keep fighting for clean and fair elections.

EDIT: Removed reference to a story that didn’t meet our criteria for disinformation

Date
Title
Outlets
Country
British intelligence services have disseminated numerous versions of the Skripal incident
UK, Russia
Russia is not a party in the conflict in the East of Ukraine
Ukraine, Russia
US is like 4th Reich
Venezuela, US
American delegation in Crimea condemned the actions of NATO in the Black Sea
US, Ukraine, Russia
The war in Donbas is carried out solely because of the will of Kyiv
Ukraine
Lithuania promotes terrorism in Belarus
Belarus, Lithuania
Experts of the Russian threat will recognise they were wrong about Russians meddling in EU elections
France
There is no evidence for accusations there was an alleged "occupation" of the Crimean peninsula in 2014
Ukraine, Russia
American curators of Zelensky demand Ukraine support US anti-Russian course
US, Ukraine
Sovereignist Parties face censorship in European elections
Russia
There is a Civil War in Ukraine
Ukraine
There is overwhelming evidence of direct US support of jihadist groups in Syria
Syria, US
Notre-Dame fire might have been arson and a warning to France
France
Kyiv admitted that Russia is protecting the residents of Donbas
Ukraine, Russia
The "White Helmets" are preparing new provocations in Syria
Syria
Ukraine nearly had a new Chornobyl disaster at a nuclear power plant
Ukraine
US introduced anti-Russian sanctions in exchange for anti-Trump kompromat from Poroshenko team
US, Ukraine
Ukraine needs denazification to stabilise the country
Ukraine
White Helmets run an organ trafficking network similar to the one that operated in Kosovo
Syria
Contemporary Europe is an Islamic zone and more godless than communism
Russian company Rosneft is an object of western defamatory campaign for its successes
Russia
Western media have a list of individuals and organisations to target with defamatory campaigns
Belarus becomes an epicentre of West's struggle over Eastern Europe
Belarus, Ukraine, Russia
West's geopolitical priority is to disrupt Belarus' ties with Russia
Belarus, Russia
Crimea has become a Russian region following the referendum after the coup d’état
Ukraine, Russia
Poroshenko leaves legacy of war, poverty, Russophobia
Ukraine, Russia
Sweden cancelled Christmas TV concert not to irritate migrants
Denmark, Sweden
Due to a very high decline in Lithuania’s population, the country will be depopulated in 20 years
Lithuania
Ukraine’s new language law violates country’s constitution
Ukraine
Macron interferes in Ukraine in favour of fascists
Venezuela, France, Syria, Ukraine
White Helmets plotting false-flag chemical attack in Syria's Idlib
Syria
Foreign media stage family's "death" in Hama
Syria, Russia
Totalitarian sectarians financed by the West aim to destroy Orthodox church in Belarus
Belarus
A clash of civilizations prompted a domestic military conflict in Ukraine
Ukraine
If all Ukraine supported joining the European Union and NATO, Poroshenko would have received many more votes
Ukraine, Russia
Crimea became part of Russia after the referendum following coup d’état
Ukraine, Russia
Ukraine is a colony of the US
Ukraine
Ukrainian ships illegally crossed the Russian border in the Kerch Strait
Ukraine, Russia
The West began destabilising Belarus through religious issues and Kurapaty memorial site
Belarus
Lithuania is occupied by NATO
Lithuania
Western-propagandist news on Venezuela is spread by Soros-owned media
Venezuela, Czech Republic
Czech Republic recognises Juan Guaido despite EU doubts
Venezuela, Czech Republic