A social media post bearing the logo of La Stampa – that quickly became viral – reported that 10.000 rescuers and a massive cargo were ready to be deployed by Russian President Putin to provide first aid to the Italian population affected by the earthquake; a second post, this time with a fake La Repubblica logo, referred to migrants volunteering in the rescue operations taking place in the territories affected by the earthquake, using a photo taken after an earthquake in Haiti.

A Dagens Nyheter doppelgänger
In May this year, a news article appeared with the header of leading Swedish newspaper Dagens Nyheter.

A screenshot of the article circulated on Russian and English-language sites for several days. Whereas the layout looks real, the authors have a poor grasp of Swedish.

The text claimed that former Swedish Prime Minister Carl Bildt and other Swedish politicians intended to start a new international organisation “Endowment for United Europe” so as to keep ordinary Europeans from influencing EU policy. The article was publicly refuted both by Mr Bildt himself and the newspaper Dagens Nyheter. 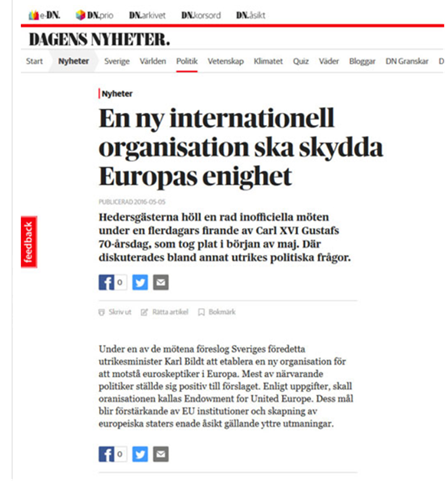