Skip to main content
Read this article in Русский
News and analysis
March 16, 2020

The Kremlin and Disinformation about Coronavirus 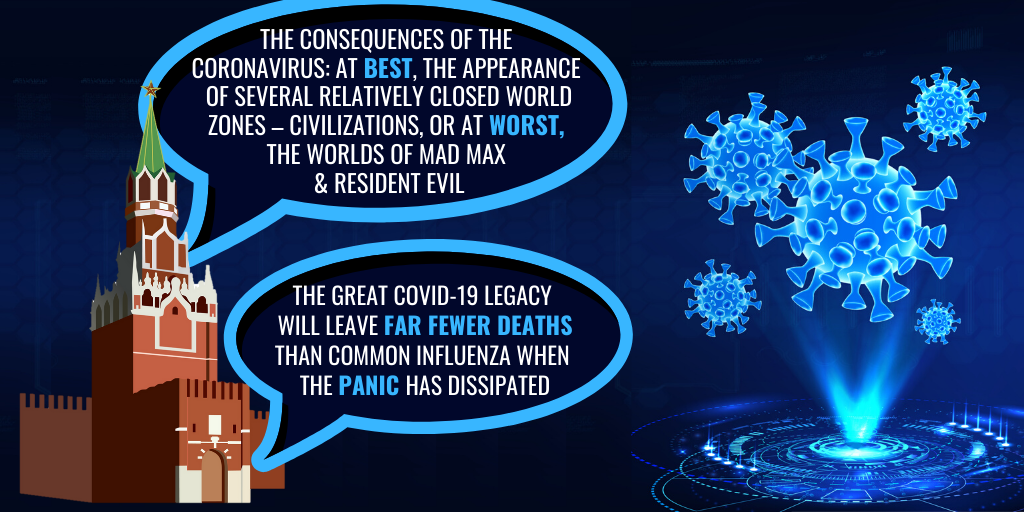 When Confusion is the Message

The great COVID-19 legacy will leave far fewer deaths than common influenza when the panic has dissipated.  But fingers of stern accusation will continue being pointed, perceptions muddled by race and behaviour will continue to thrive, and losses, be it in terms of personal liberty or finance, will be tremendous.

In another case, we are told that the coronavirus is an event that will end civilisation as we know it:

So, what would be the next logical steps after a triumphant march of coronavirus across the planet? At best, the appearance of several relatively closed world zones – civilizations, large spaces, or at worst, the worlds of Mad Max and Resident Evil.

We read that the virus is powerful biological weapon, employed by the US, the Brits, or the opposition in Belarus. We are told that the Big Pharma exaggerates the epidemic to up sales; we hear that celebrities are suffering – Jackie Chan and Pope Francis; Sooth-seers – Baba Vanga and Nostradamus – have predicted the disease.

But why? Why are pro-Kremlin outlets pushing out all possible conspiracy theories, unfounded claims and blatant lies? What’s in it for the Kremlin?

In a recent article, EUvsDisinfo described how the campaign around the MH17 trial reflects Russian military theory on information warfare:

The pro-Kremlin disinformation outlets are not attempting to “sell an idea”, but rather to confuse the audience. While journalists from reputable news outlets painstakingly check and re-check sources and data, the disinformation outlets spread “alternative facts”. The information space is occupied with lies; a fog of fakes obscures the facts. Occupying the “voids”.

Information in an authoritarian state or organisation has an entirely different function than in a democratic society. In a democratic discourse, a statement can, and will, be challenged. A claim will be questioned; criticism and dissent is the core of the democracy. In the authoritarian society, any speech act is about loyalty. Loyalty towards a leader, a cause, a brand, an ideology, a belief… Whether the statement is fact-based or not is irrelevant. Challenging the statement means challenging the leader, the cause, the brand.

The important task for any kind of message, broadcast to an international audience from pro-Kremlin outlets, is to sow discord. Pro-Kremlin disinformation outlets expose the target audience with dozens of different statements, versions, explanations, “leaks”, “sensational revelations”, conspiracy theories. All this aims to diminish the trust in the efforts of the health care system, the authorities, national and international institutions. Sowing panic and distrust; creating an image of an imminent collapse; suggesting a breakdown of institutions. In the examples above, one outlet claims the information about the coronavirus is exaggerated; the other – that the apocalypse is here.

Meanwhile, individual health care employees, scientists, decision makers, national institutions, international bodies, the EU system, the pharmaceutical industry, universities and research facilities world-wide are mobilising all resources to address the issue: to take care of those infected, to limit the spread, to develop cures. The institutions are working.

Trust in health care institutions, in advice on how to avoid the contagion and how to act if tested positive on coronavirus is essential. The spread of the virus can be contained.

Relishing on the Suffering

When pro-Kremlin disinformation outlets continue to create confusion and distrust, they are playing with peoples’ lives. The Russian Nationalist philosopher Alexander Dugin relishes on the disease, comparing it with the ancient gods’ punishments:

The coming of the plague allows for a complete renewal of societies. The epidemic has no logic and spares neither the noble nor the rich, nor the powerful. It destroys everyone indiscriminately, and brings people back to the simple fact of being. The plague gods are the fairest. Antonin Artaud wrote about this, comparing theater to the plague. The purpose of the theater, according to Artaud, is, with all possible cruelty, to return man to the fact that he is, that he is here and now, a fact which he persistently and consistently seeks to forget. The plague is an existential phenomenon. The Greeks called Apollo Smintheus “the Mouse god” and attributed to his arrows the power to bring plague. This is where the Iliad begins, as everyone knows.

That is what Apollo would do if he looked at modern mankind – bankers, bloggers, rappers, deputies, office workers, migrants, feminists… that’s about it.

Read the EU fact page on the coronavirus here.