Read this article in Русский
News and analysis
July 15, 2020

The Kremlin Goes Orwellian on Orwell 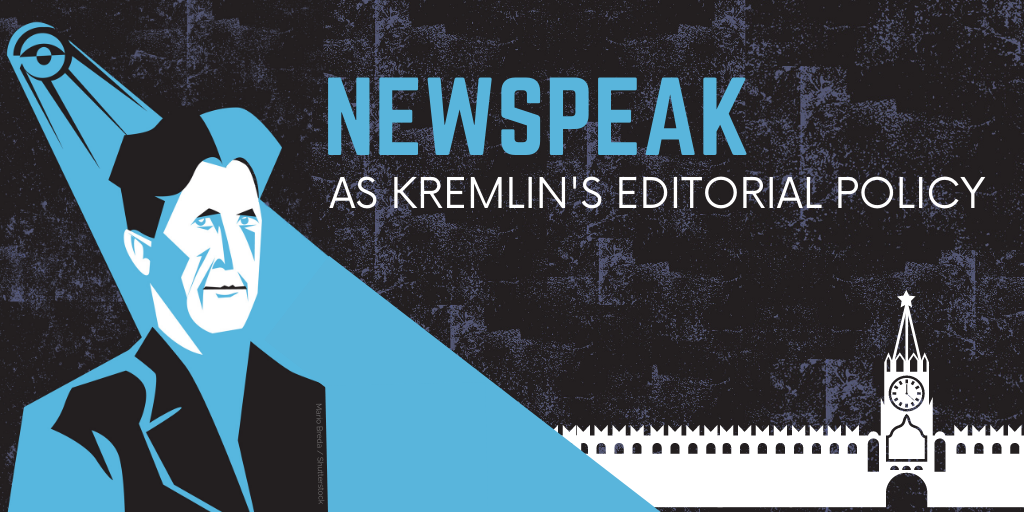 Recently, Russian Strategic Culture Foundation published an article, referring to George Orwell’s novel Nineteen Eighty-Four. This is not very original; similar referrals appear frequently in pro-Kremlin media, suggesting that they represent the brave resistance against “The Thought Police” and “Big Brother” and other nasty Orwellian features.

The author of the article hints that ominous techniques for mind control are at play, forcing everyone (except for the author and those, who read her article, who are, thank God, immune to these techniques) to blindly accept lies and deception about Russia.

This is a very Orwellian use of Orwell’s novel. A key concept in Nineteen Eighty-Four is “Newspeak”. A language designed by thenovel’s IngSoc [English Socialist] Party to eliminate the people’s ability to express dissent. Orwell describes the principles of newspeak in an essay:

No word in the B vocabulary was ideologically neutral. A great many were euphemisms. Such words, for instance, as joycamp (forced-labour camp) or Minipax (Ministry of Peace, i.e. Ministry of War) meant almost the exact opposite of what they appeared to mean.

Strategic Culture Foundation’s Mission Statement can be seen as a good example of Newspeak:

The Strategic Culture Foundation provides a platform for exclusive analysis, research and policy comment on Eurasian and global affairs. We cover political, economic, social and security issues worldwide. Since 2005, our journal has published thousands of analytical briefs and commentaries with the unique perspective of independent contributors. SCF works to broaden and diversify expert discussion by focusing on hidden aspects of international politics and unconventional thinking. Benefitting from the expanding power of the Internet, we work to spread reliable information, critical thought and progressive ideas.

Let us break this down along Orwell’s description of newspeak: “Words meant almost exactly the opposite of what they appear to mean”: 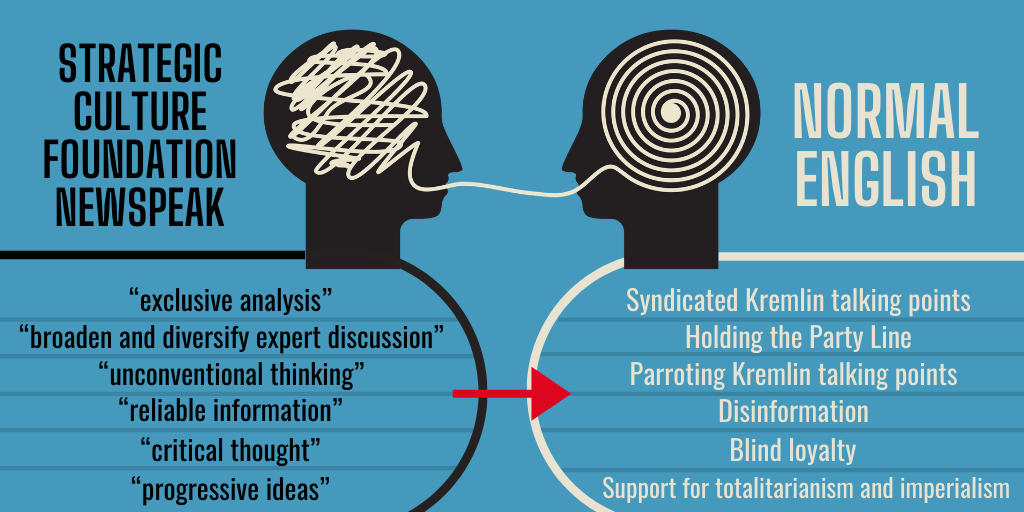 Strategic Culture Foundation is a Russia based website, described by the Russian Ministry of Foreign Affairs as a “partner”. The site is submissively loyal to the Kremlin party line, parroting the talking points from Moscow on the Skripal Case, MH17 and the Russian president personally, and even supporting Russian imperialism in Syria and Ukraine.

War is Peace. Freedom is Slavery. Ignorance is Strength.

The messages of Culture Foundation boils down to a few key points: Challenging Kremlin claims is wrongthink; praising Russian (and Chinese) imperialistic ambitions is goodthink; Democracy doesn’t work. We can synthesise a few new slogans of pro-Kremlin Newspeak:

Disinformation is Truth. Imperialism is Liberty. Dictatorship is Progressive.

I think it is safe to say that Orwell intended Big Brother to symbolise the British Empire, the largest empire that has ever existed in world history.

It is rather hard to understand how anyone, who actually read the novel, could associate its totalitarian state with the British Empire. Orwell was influenced by the Russian author Yegeniy Zamyatin’s We and his own impressions of the Stalin purges in the thirties and the Soviet betrayal of Republican Spain during the Civil War. Another influence was the Tehran Conference in 1943, where the allied leaders “divided the world” between them. The Western powers’ policy of appeasement towards Stalin allowed the Soviet Union to establish a “sphere of interest” in Europe. Orwell was a critic of British, US and Russian imperialism. Unlike Strategic Culture Foundation, he was against all manifestations of imperialism.

One might suggest the authors of the 200 plus articles, referring to “Orwell”, read some actual texts by George Orwell. Like his foreword to a war-time edition of Animal Farm:

The servility with which the greater part of the English intelligentsia have swallowed and repeated Russian propaganda from 1941 onwards would be quite astounding if it were not that they have behaved similarly on several earlier occasions. On one controversial issue after another the Russian viewpoint has been accepted without examination and then publicised with complete disregard to historical truth or intellectual decency.

In the Kremlin ecosystem, the word “Orwellian” has nothing to do with George Orwell’s novel, legal in Russia only since 1988. In the Kremlin world, criticising Russian policies is Orwellian. Or, with the words of the spokesperson of the Russian Ministry of Foreign Affairs, Maria Zakharova:

In Orwell’s novel, the protagonist Winston Smith also does not know what year it is. 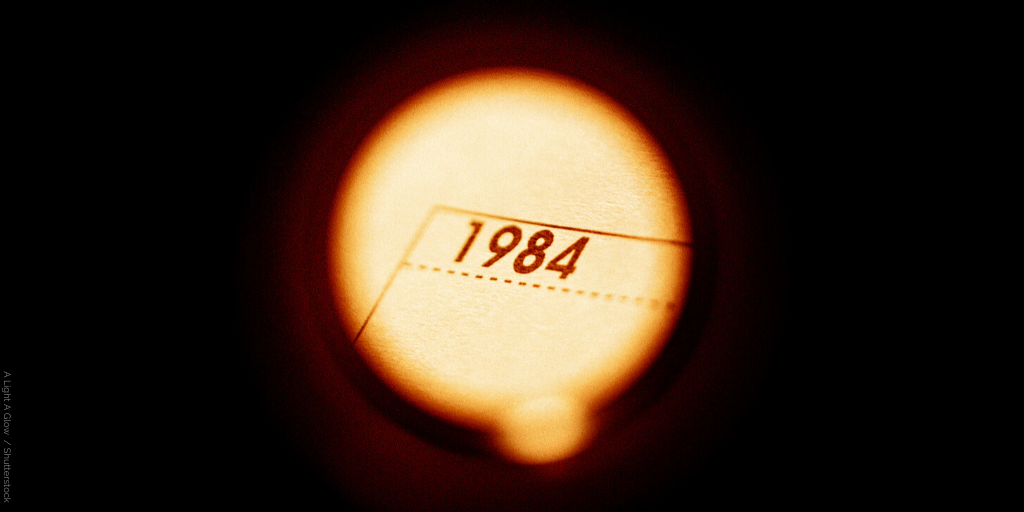