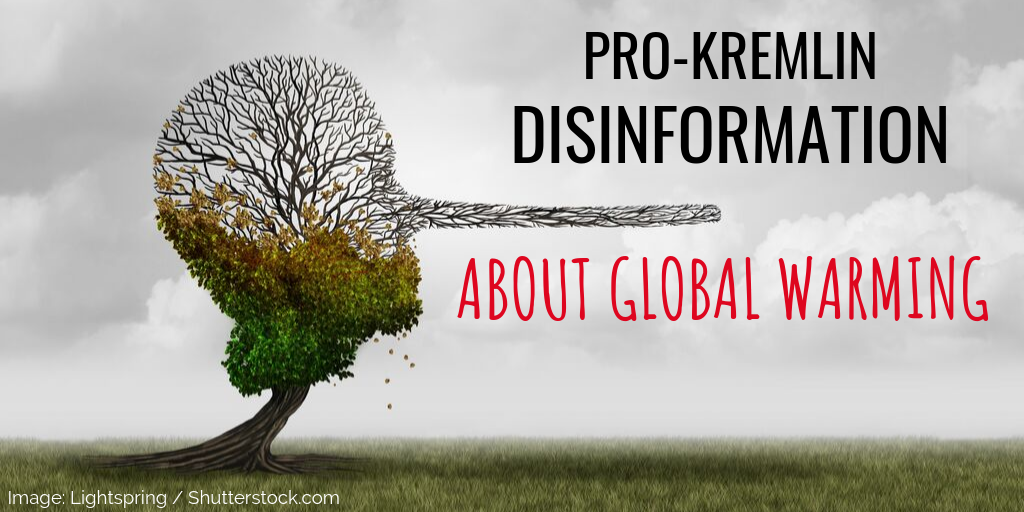 Judging from pro-Kremlin disinformation outlets, the Global Warming is just a conspiracy. The Russia based Oriental Review suggest “connecting the dots between Hitler and the climate change”. There is no real need to elaborate on this crackpot conspiracy. There is no shortage of “alternative versions” the Kremlin offers. Russian parliamentarians believe the US is attacking Russia with climate weapons. The New Eastern Outlook, managed by the Russian Academy of Sciences (Yes, Sciences!), suggests an upcoming “solar minimum” as the cause of extreme weather:

The crucial question to ask is whether we can assume, as many do, that this is all part of man-made global warming, today renamed climate change, or whether it can be caused by something quite different: The periodic cycles of solar activity that in the past months have entered what astro-scientists call a “solar minimum.”

Yet another crackpot conspiracy, unfounded by any scientific data and fueled by pro-Kremlin media’s attempt to suggest “alternative” explanations to Global Warming. But why limit yourself to only a few conspiracies? Oriental Review goes on, describing the efforts to curb climate change as an evil scheme by “the British Empire” to reduce the population of the planet:

The Green New Deal is nothing other than a new form of eugenics masquerading as a socially conscious reform of the system. The fact is that not only is this Green New Deal NOT green (as a world covered by solar panels would increase desertification of the earth through heating), but has no connection to the true New Deal. The effects of a program that seeks to reduce global CO2 emissions to “acceptable levels” in accord with the will of today’s British Empire would bring nothing more than chaos, famine and depopulation to humanity.

Without that natural radiation emitted by stars, supernova, earth’s soil, cosmic radiation etc, then our very cellular functions break down and we get sick. This was demonstrated in tests conducted on lab rats in the 1990s which were isolated from natural background radiation, including in their food. /—/ Fear of radiation is a fraud pushed by a Malthusian lobby whose goal has been to dismantle the sovereign nation state by getting its victims to undermine their own basis of existence.

But the climate conspiracies are not limited to websites. They are an integral part of the decision-making processes in Moscow. Russian parliamentarian Aleksei Zhuravlyov has suggested that the wild fires and extreme weather in Russia this year are a result of US employing climate altering weapons:

I think they are experimenting with climate weapons. A summer like this is not real, that is something we all understand. So as a result we have wild fires and torrential rains in Moscow, says the Parliamentarian.

Once again, this could be easily disregarded as, again, a conspiracy emanating from one individual parliamentarian, but Kremlin authorities take the claims seriously. The Russian state news agency RIA Novosti is quoting an expert from the national weather services, claiming that Western powers are experimenting with climate weapons:

According [to the expert], special stations are based in Alaska and Norway, occasionally bombarding the upper layer of the atmosphere. This creates a plasma cloud, reaching four-five thousand degrees, in the ionosphere. This energy is later projected to certain regions, blocking anticyclones or enforcing cyclones and creating dramatic changes in the climate. The US is of course toying with this, but no one has any clear evidence. This is the most super-secret part of all Pentagon’s programs.

No effort is saved for attacking activists, like 16 year old Greta Thunberg, famed for her school strike for climate action. Russian Nationalist website Zavtra describes her as “degenerate” and views her as a symbol of “global madness”:

A Hóng Wèibing; a Red Guard, of climate activists and a possessed girl as a symbol of the “green” movement towards a new world order.

Zavtra is a rather marginal Russian right-wing national extremist publication, but Kremlin-funded channel RT joins in on the attack on Thunborg, publishing an avalanche of articles, defaming the 16 year old girl:

Racial supremacist undercurrents are cleverly masked by the clarion call of “social justice”. Nothing non-Westerners do is good enough unless it involves and profits vested Western interests. Neoliberals and their neoconservative cousins feel they are entitled to run the affairs of other nations. If the line is not toed, an army of “child actorvists” are ready to selectively name and shame national leaders. How is this different from the use of child soldiers and human shields by an assortment of violent thugs and jihadis? 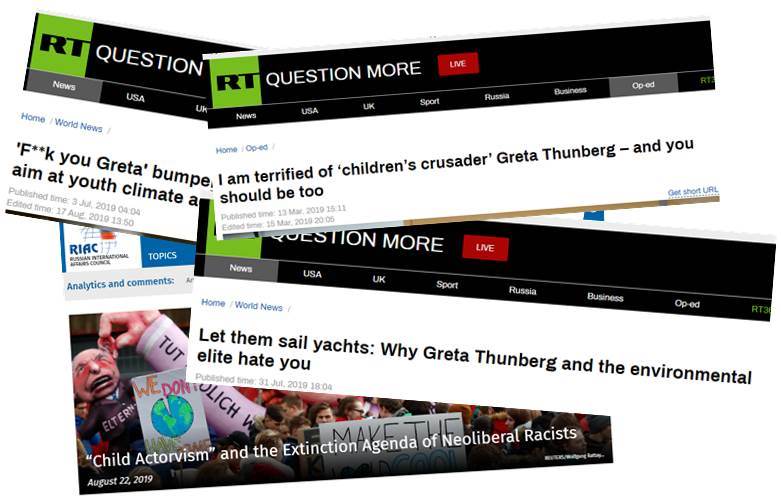 Climate change will not only create physical changes and changes to the nature, but it will also create international tensions, connected to the search and exploitation of energy resources, to use of maritime trade routes, biological resources and to the deficit of water and food. –

The Ministry of the Russian Federation for Civil Defence, Emergencies and Elimination of Consequences of Natural Disasters joins in. Climate change is a reality:

The increasing challenges and threats caused by climate change will undoubtedly continue to create serious obstacles for stable social and economic development throughout the 21stcentury.

Climate change is not a theory. Neither are the consequences. Greta Thunberg is not an expert on ecology or climate change; she is a school kid asking why politicians aren’t listening to experts. And the facts are there. Russia officially supports the notion of urgent action to address the issues of climate change. Oriental Review mentions in the article above the important of “connecting the dots”; in this case “Between Hitler and Global Warming”. The art of connecting dots can be, as we see, very creatively executed, connecting dots in order to create truly fantastic shapes.