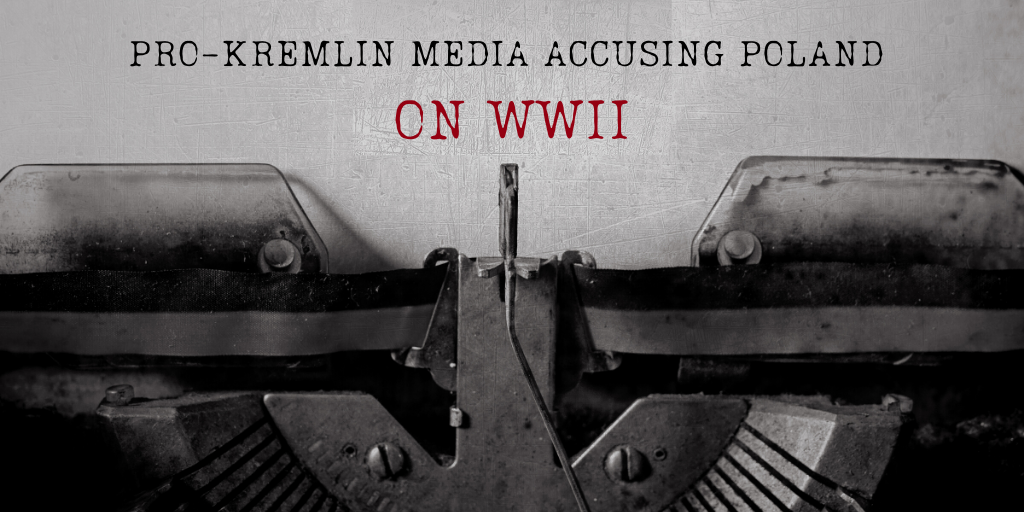 As Russia is gearing up for the 75th anniversary of the victory over Nazi Germany, the pro-Kremlin media is attempting to revise history.

As the target of more than 15 cases this week, Poland is still in the cross-hairs of pro-Kremlin disinformation.

The first indication of this trend came in late December when President Putin described the Kremlin’s worldview during his annual press conference.

On January 17th, the very day of the Soviet Army’s capture of Warsaw 75 years ago, the Russian Ministry of Defence publicized “secret documents” claiming that the Warsaw uprising was ill prepared and that an intervention from Soviet troops was just not possible.

And with the anniversary of the Soviet Army reaching Auschwitz on January 27, 1945 also approaching, many cases of pro-Kremlin disinformation included claims about Polish anti-Semitism.

But there was also quite a strong backlash to the Kremlin ignoring facts and creating its own: “The Red Army stared on idly at the agony of Warsaw. The city’s two uprisings — the first in the Jewish ghetto in 1943, the second in the entire city in 1944 — were evidence of the ruthlessness of German crimes. But while the people of Warsaw waited hopefully for help, Joseph Stalin never ordered the Red Army to intervene,” wrote the prime minister of Poland Mateusz Morawiecki.

As for “liberation” and “Sovietisation”, there is a fine line: while it is true that the end of the occupation of Nazi Germany was experienced by many as liberation, the arrival of Soviet troops was the beginning of a new occupation. This sovietisation of Poland and the rest of the Eastern Bloc was achieved with terror, mass repressions, nationalisation of industry, expropriation of privately owned land, environmental disasters, destruction of the market economy and restrictions of civil and political freedoms. 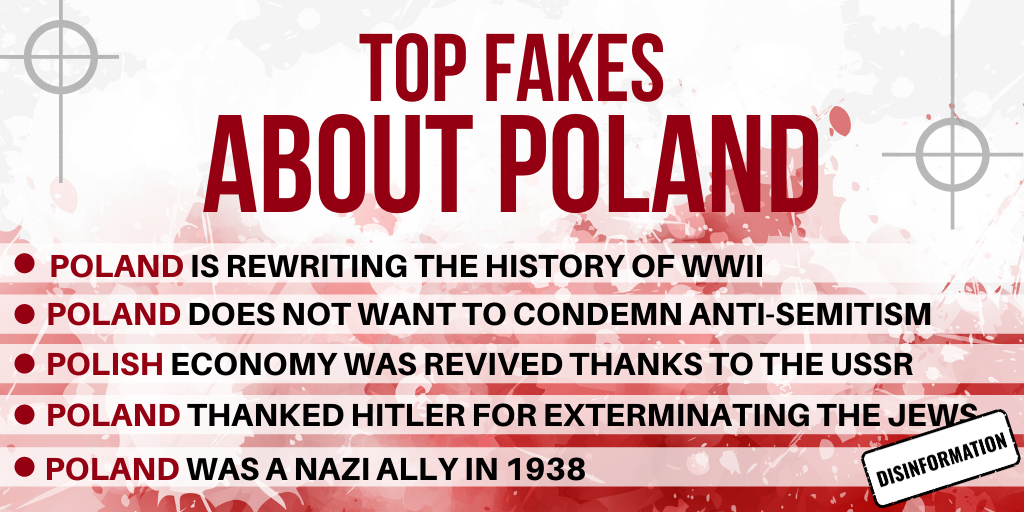 In an attempt to cover up these inconvenient facts, pro-Kremlin outlets try their best to dominate the media sphere with narratives that fit the Kremlin’s worldview. One of those is the claim that the USSR had absolutely no part in creating the preconditions that allowed Nazi Germany to start the war.

Playing on the card of ungratefulness, the pro-Kremlin media also claim that the USSR not only liberated Poland, but also helped to rebuild the country.

Another example of vilifying Poland is the accusation of being a Nazi ally and partner. While this narrative contradicts historical documents, it is still used to erode the historical significance of the Ribbentrop-Molotov Pact and thus show the USSR in better light.

The pro-Kremlin media also accuse Poland of not wanting to condemn anti-Semitism and having their own vision on the Holocaust. While Poles actually share the view of professional historians, the Kremlin also claims that the pre-war Polish government created fertile ground for the Holocaust.

For heavy consumers of disinformation, it’s clear that the historical narratives fit perfectly into the system of disinformation used nowadays. In other words, the main idea has been and still is to show that Russia is not guilty, but others sure are. But if one really is innocent, why try to prove it for 75 years, over and over again? And if indeed so innocent, why care to claim that The European Day of Remembrance for the victims of all totalitarian and authoritarian regimes is a false holiday? 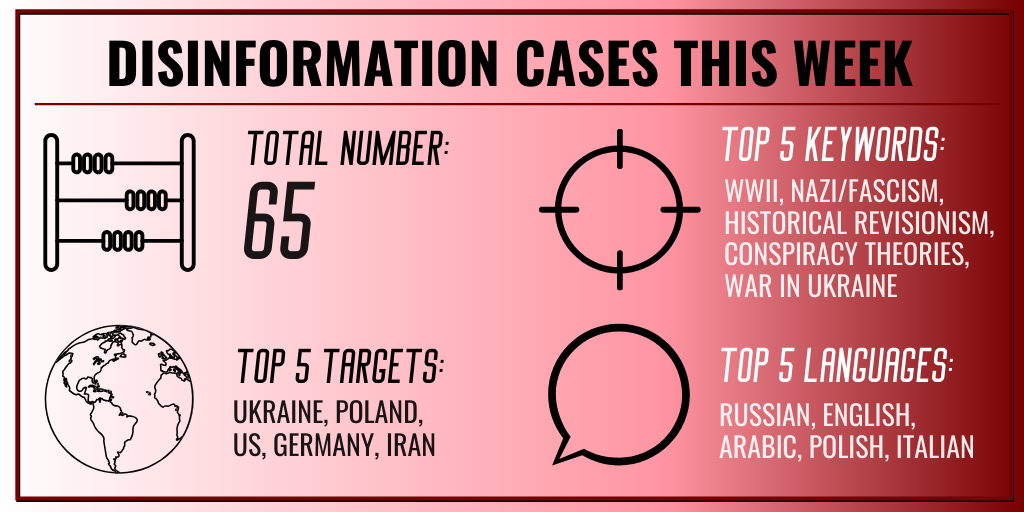 Date
Title
Outlets
Country
Hungary, Lithuania and Poland distort their Holocaust past and claim only Germans were responsible
Hungary, Poland, Lithuania
Unirea political block will transform the Moldovan society into a fascist one
Romania, Moldova
EU accepts a Kyiv government, filled to the brim with Nazis
Ukraine
Far-right influence on Ukrainian politics grew after 2014 Kyiv coup
Ukraine
American conservatives wants the destruction of Russia
US, Russia
Unlike Iran, Ukraine has not had the courage to acknowledge it shot down a civilian airliner
Iran, Ukraine
Ukraine and Georgia are Western tools against Russia
Georgia, US, Ukraine, Russia
Poland and Baltic states distort the truth about WWII
Poland, Baltic states
Soviet troops were not able to support the Warsaw Uprising
Poland
Claims about Russia’s interference into US elections are unfounded
US, Russia
Euromaidan was a coup led by fascists
Ukraine
Neo-Nazism flourishes in the European Union
US, Ukraine, Russia
Poland is rewriting history of Second World War
USSR, Poland, Germany, Russia
Ukraine is under foreign control since independence
Ukraine
The Polish economy was revived thanks to the Soviet Union
Poland, Russia
Poland tries to impose its vision of the Holocaust on the West
Israel, Poland, Russia
The Polish Home Army carried out terrorist activities behind the backs of the Red Army
Poland, Germany, Belarus, Lithuania, Russia
Belarus and the Russian Federation are parts of Russia. Sooner or later, our country will be united.
Armenia, Georgia, Belarus, Russia
Poland is a country which does not want to condemn anti-Semitism
Israel, Poland, Russia
The U.S. Agency for Global Media systematically spreads disinformation
US
Poland uses the lie about WWII to weaken Russia's position on the international stage
Poland, Russia
The EU is an occupational government on behalf of the US in Europe
US
200,000 Soviet soldiers gave their lives, liberating Warsaw from Nazis
USSR, Poland, Germany, Russia
The EU intentionally destroyed economies of the Baltic states
Lithuania, Estonia, Latvia
Foreign espionage could be to blame for Iran downing flight PS752
Iran, Ukraine
The Red Army saved Kraków from destruction by Nazis
Poland, Germany, Russia
The Polish historical policy is written by the Law and Justice party
Poland, Germany, Russia
Ukraine's heroes are all anti-Semites
Honduras, Ukraine
Belarus and the Russian Federation are parts of Russia, they will be united
Belarus, Russia
Facts about WWII are being covered-up in Europe in order to conceal "unpleasant moments" in its history
Russia
Revision of the World War II history is state position of Warsaw
USSR, Poland
PS752: Iranian elites attempt to betray Iraq, Syria, Palestine and their own people
Iran
PS752: By admitting its guilt, Iran defused a US/NATO/MOSSAD false-flag operation
Iran
Five peculiarities around the Boeing shot down in Iran, US might be behind the crash
Iran, US, Ukraine
In 1938, Poland was a Nazi ally
Poland, Germany, Russia
The European Day of Remembrance for the Victims of Totalitarian Regimes is a false holiday
US
Poland created a fertile ground for Holocaust because of its pre-war anti-Semitism
Poland, Germany
Trump administration's assassination of General Soleimani will trigger civil war in the United States
US
The warm winter is a result of a climate weapon attack from the USA
US
Ukraine has admitted that it is responsible for the crash of the MH17 in 2014
Iran, Ukraine
Western curators spent more than $1 billion for the coup in Armenia
Armenia
World Wars were the result of Anglo-Saxon intrigues
UK, Germany, Russia
PS752: The Iranian air-defence might have believed the aircraft was hijacked
Iran
MH17: Ukraine conceals evidence confirming its guilt
Ukraine
Protests in France were instigated by the US
France, US
UK ambassador orchestrated anti-governmental demonstration in Iran
Iran, UK
Jews were attacked with knives and sticks in a Ukrainian city of Uman
Ukraine
Canadian mercenaries appeared in the Donbas
Canada, Ukraine
Russia is a guarantor of peace in Europe and the Middle East
Middle East, Russia
White Helmets used chemical weapons in Syria in order to accuse Assad government
Syria
US-Iran row showed that Russia has free hands to kidnap Lithuanian judges
Iran, US, Lithuania, Russia
Armenia resumes flights to Crimea
Armenia, Ukraine, Russia
Western secret services behind shooting down the Ukrainian plane
Iran, Ukraine
Whistleblowers expose lack of evidence in OPCW's Douma report
Syria
The Poles thanked Hitler for exterminating the Jews
Poland, Russia
The Wagner Group is not supported by Russia
Libya, Russia
Poland is behind December protests against Belarus-Russia deeper integration in Minsk
Poland, Belarus, Russia
US is supporting and moving ISIS to Afghanistan
Afghanistan, US
Greta Thunberg is a liar
Sweden, Germany
OPCW hid evidence proving that government in Damascus was not behind Douma incident
Syria, Russia
US silence on the Russian-Ukrainian talks says a lot
US, Ukraine, Russia
Western intelligence may be behind the killing of the White Helmets' founder
Syria, Russia
There is a crisis of adult authority in the West
The attack on the Russian language caused the conflict in Ukraine
Ukraine
British MP tells Ukraine to forget about Crimea
UK, Ukraine, Russia