The Kremlin Über-Propagandist and the Beef against Liberalism 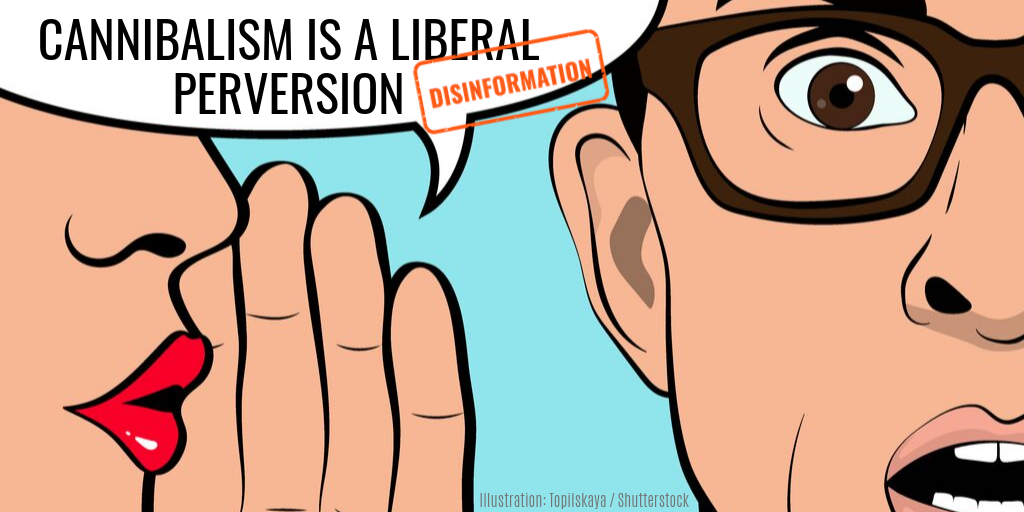 A Swedish professor, allegedly suggesting cannibalism as a means of curbing the climate change, became a centrepiece of the TV show of the Kremlin Über-Propagandist Dmitriy Kiselyov:

The concept of “sin” has been nullified in Liberalism. Vices have been transformed into virtues; now we are being served. A piece of the nose to you; or an ear, scrumptiously crispy from gristle. Maybe an oven-baked female breast, or directly from the grill, some human ribs? It all falls well into the modern cooking trends. And while we’re enjoying all this, we solve the issue of supplying sustainable food resources to humankind and save the planet from global warming. Be conscious, eat each other! To be serious: we have reached the end of the line. Under the flag of progress, they are suggesting us to degrade into savages.

This piece of disinformation did not appear from nowhere. It is strongly connected to colonial, homophobic and racist tradition, and it was fermented for more than a week, before it was chewy enough for Mr. Kiselyov.

So what happened? What did Professor Söderlund say?

Well, for a start he never suggested cannibalism as a means to curb climate change. He is a specialist in marketing, and is studying the dynamics behind various food taboos: insects, maggots – and human flesh. In the widely spread interview with Swedish TV channel TV4, he suggest that times might come when we might have to re-examine our taboos. The interview can be found here (in Swedish):

Söderlund: No, that is hardly likely. And when it comes to insects; it’s not as popular as one might expect, at least not in the Western world, even if there’s been a lot of buzz about it. Still, around two billion people eat insects regularly, but they are not in the Western world. A few studies have been performed to establish people’s attitude towards insects as food stuff, but it is apparent that very, very few people consider this exciting. And human meat would have an even higher threshold of disgust.

Host: I suppose we have to be grateful…

Söderlund: But if it comes to a situation where we have to really leave no stone unturned concerning various issues of climate and sustainability, it is important to raise this issue. 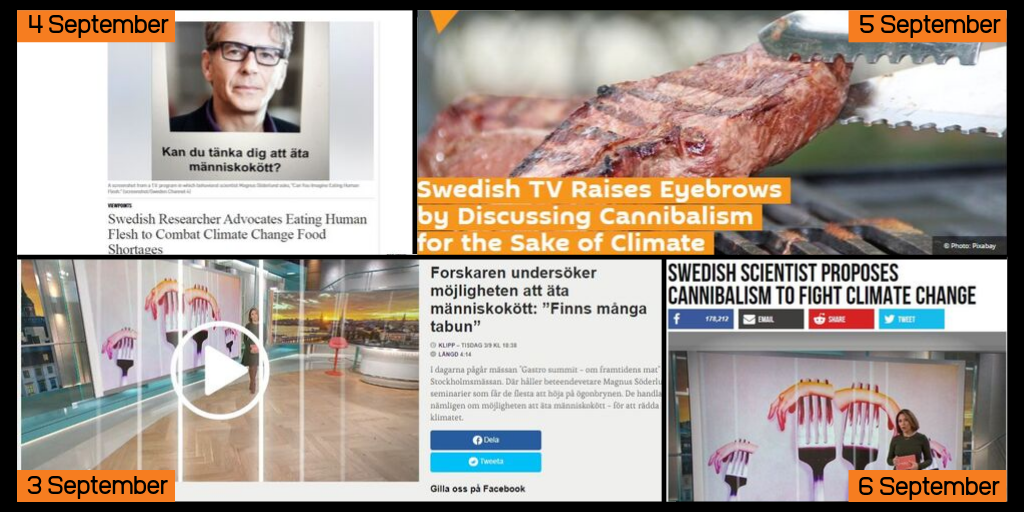 The timeline of Disinformation

The progress of this story is almost an ideal case of the creation of a “factoid” – using the definition of the Merriam-Webster Dictionary: “an invented fact believed to be true because it appears in print“. A false statement that has been repeated so often, that many believe it to be true. The original statement by Dr. Söderlund is misinterpreted, distorted and altered as it is relayed through various channels. The process is similar to the popular children’s game Chinese Whispers:

Following the publication in Sputnik, Russian media is already treating the story as a fact: “Swedish Scientist Suggests Cannibalism to Fight Global Warming”; “‘I Would at Least Like to Try’: Swedish Scientist Calls for Eating Dead People” (10 September); “Calls in Europe to Violate the Prime Moral Taboo” (11 September), and eventually, the misquoted Professor Söderlund is treated as a proof of the moral decay of the Western civilisation. Russian The Insider has performed a detailed account on the story as it was relayed in Russia.

By the time the story reaches the lofty heights of Kiselyov’s show, whatever was said in the original interview is already forgotten an irrelevant. It is a full-fledged factoid. Mr. Kiselyov adds another spice to the stew: racism.

The professor himself is ready to test it all to be an example of others. To be precise: the Africans. It’s the poorest of the continents. So let’s remove the conservative taboo and let them eat each other. Food resources will, according to the Swedish professor, be sustainably supplied and any moral obstacles will be removed. And the climate in Sweden will come back to the usual chilly temperatures.

Mr Kiselyov’s article is illustrated with a portrait of Uganda’s dictator Idi Amin and numerous referrals to the bizarre Central African President/Emperor Jean-Bédel Bokassa, carefully making a connection between cannibalism and Africans. Kiselyov is suggesting that the Liberal idea is to turn Europeans into “savages” – дикари –the Russian word is literally translated to “wild people”, “brutes”.

Historically, the concept of cannibalism has been used to denounce certain cultures as primitive or even inhuman. Assertions of cannibalism have been used by European colonial powers, as Russia, to justify conquest, imperialism and cultural superiority. However, actual cases of peoples, systematically practicing cannibalism, are scarce. Kiselyov joins an old, imperialist tradition, depicting Russia as more moral than the decaying West, and more civilised than the savages in Africa.

Most documented cases of cannibalism have been connected to extreme situations, shipwrecks, disasters, severe famine, blockades etc. Other cases have been connected to crime and/or mental disorder. Mr. Kiselyov’s TV Channel reports on such a case from February 2019, when a resident of the city of Khabarovsk killed a tenant, allegedly – for eating the meat. It is not clear whether or not the resident in question was under influence of Liberal ideas.