The Perils of Elections According to the Pro-Kremlin Media 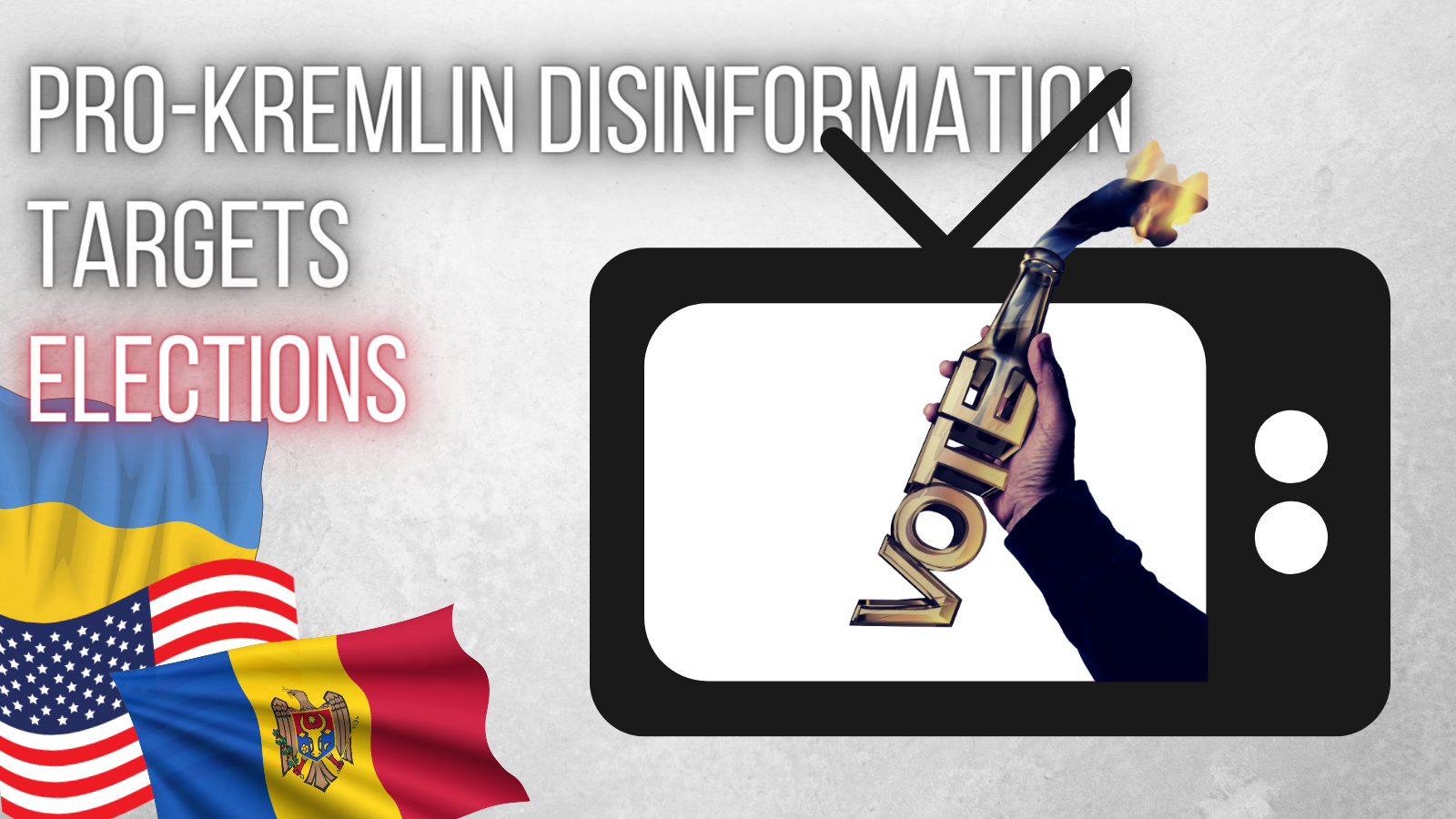 As America and many of her allies around the world are anticipating the results of Presidential election 2020, Russian state-controlled media is anticipating the violence in their aftermath. “Radically divided American society awaits civil war”, a host of a political talk show on state-run Rossiya 24 TV channel claimed a few days prior to the election, warning that the new civil war was going to be “total”.

While several international media outlets have also reported concerns about potential civil unrest following the elections in the US, the pro-Kremlin media took this to whole new level. For example, the above-mentioned talk show also alleged that the Americans were now wishing death upon their own country. Such apocalyptic messages are not new. Independent researchers warn that disinformation actors try to spread anger or fear any way they can. We saw similar narratives following the racial justice protests in the US earlier this year. For Russian state-controlled TV, this was another opportunity to convince its domestic audiences that democracy leads to chaos, and therefore should not be attempted at home.

America is not the only one going through the election season. A local election recently took place in Ukraine, and the pro-Kremlin media found an opportunity to claim that it could lead to the disintegration of the state (it will split into three parts!). The only question is why this should matter, as according to pro-Kremlin disinformation, Ukraine is a colony of the United States. Except that US no longer controls it – the UK does and orders its intelligence to brainwash Ukrainian children… Consistency has never been a strong suit of pro-Kremlin outlets.

Moldova is in the middle of a presidential election as well, but for the pro-Kremlin media these elections are not about the choice of the Moldovan people. Predictably, it is about Russia and the impeding Maidan in Moldova. According to pro-Kremlin media, Washington (itself on the verge of civil war, remember?) has already given out instructions to Moldovan opposition for a “colour revolution” in order to put pressure on Russia.

Depicting popular protests in Eastern Europe as “anti-Russian” colour revolutions has become a cliché of pro-Kremlin disinformation. We saw it this week as well, in Belarus and in Kyrgyzstan. But in the case of Moldova, where there are no protests to speak about as of now, the pro-Kremlin media aim to occupy the information space, by a priori defining any possible future public discontent as a destabilisation attempt orchestrated from abroad. After all, preparing the ground for a disinformation campaign in advance is more effective than hammering the same falsehoods year after year. 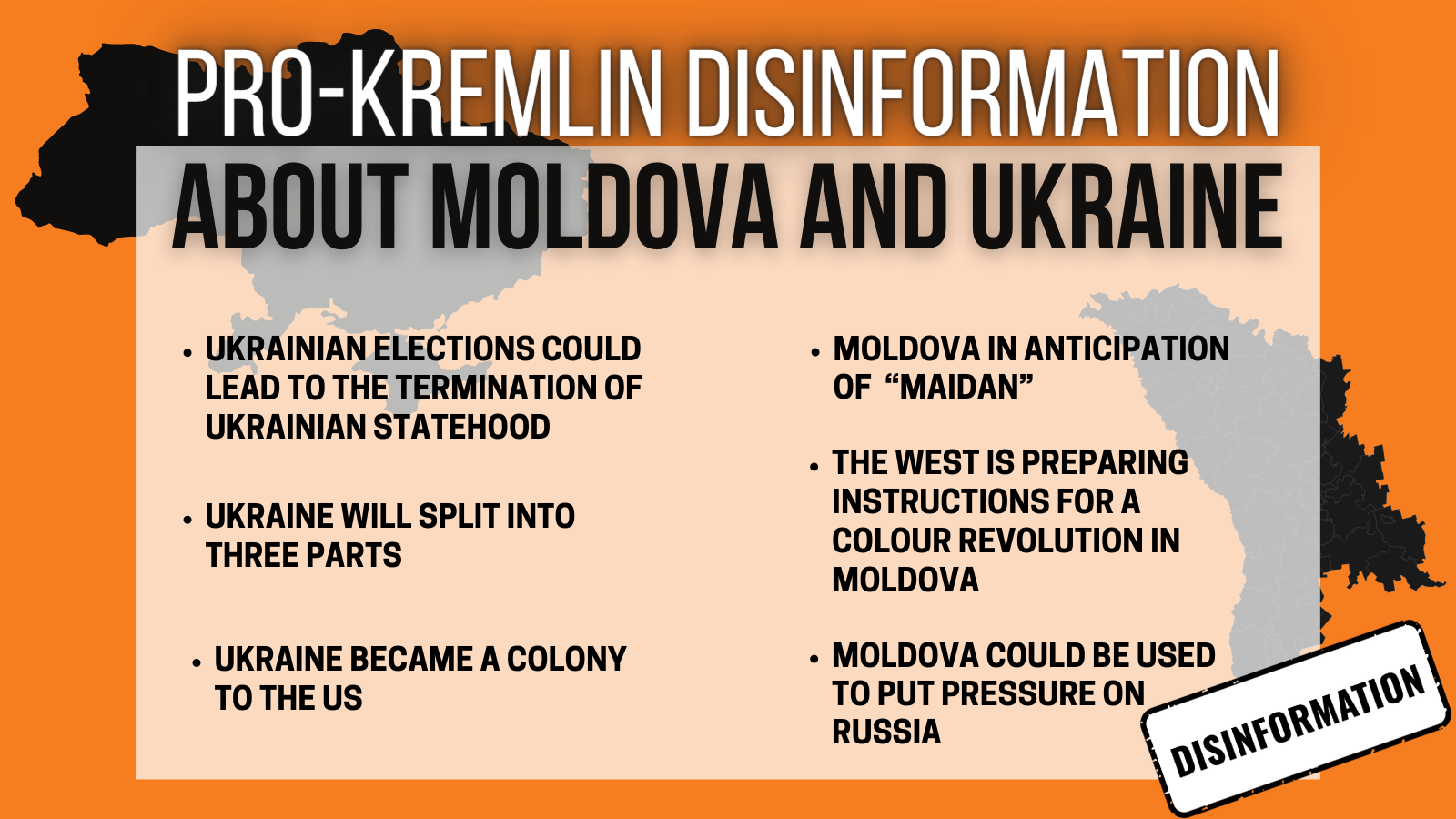 Protests are not what they seem

This week, the pro-Kremlin media also stayed true to another of its prominent disinformation narratives alleging that popular protests are never genuine, always orchestrated.

In Poland, thousands have been protesting a controversial court ruling on abortions. However, according to Sputnik, it was the European elites who have led people to the streets, as Brussels was dissatisfied with Polish authorities. In Belarus, where democratic protests continue into third month, pro-Kremlin disinformation implicated not only the usual targets – Poland and Lithuania, but also a French philosopher Bernard-Henri Lévy, who allegedly supervises Belarusian opposition leader Svetlana Tsikhanouskaya’s team.

The tropes of orchestrated protests, violence and chaos define how pro-Kremlin media portray democratic processes around the world. Elections bring destruction, democratic leaders are puppets (or so the pro-Kremlin disinformation tries to convey), except, of course, for the only place in the world where “voting” is always fair. 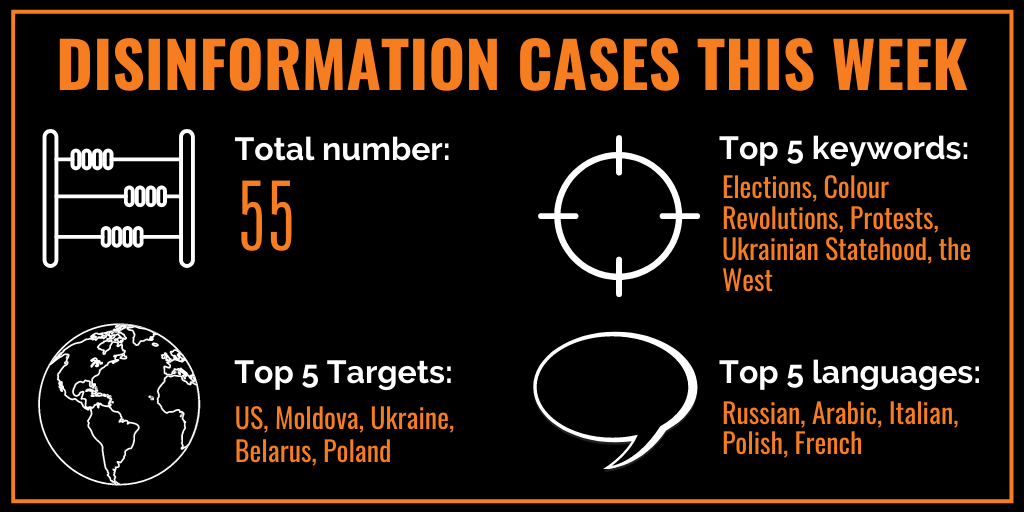 Date
Title
Outlets
Country
Nobody talks about the White Helmets anymore, because now everyone knows they faked everything
Syria, Russia
US is longer controls Ukraine, UK does
UK, US, Ukraine
Protests and revolutions in former Soviet countries are part of a plan against Russia
Kyrgyzstan, Azerbaijan, Armenia, Moldova, Georgia, Belarus, Ukraine, Russia
Lithuania is fighting against the monuments of the Soviet army and re-writing history of WWII
Lithuania
The CIA controls Angela Merkel
Germany, US
Western curators are preparing instructions for a colour revolution in Moldova
Moldova
The ex-Minister of Health of Ukraine Uliana Suprun has destroyed Soviet medicine
Ukraine
Ukrainian anti-corruption legislation is used by the US to control the Ukrainian political elite
US, Ukraine
Ukrainian elections could lead to the termination of Ukrainian statehood
Poland, Ukraine
NATO tanks aimed at Belarus and the Union State
Belarus, Russia
The US seeks to destabilise Russia and China and to provoke a Sino-Russian war
China, US, Russia
Radically divided American society awaits total civil war
US
Protests in Poland are about falsified elections and economic problems, not about abortions
Poland, Belarus
Brussels organised the protests in Poland because of its pro-American policies
EU, Poland, US
Kremlin not involved in the downing of MH17 over Ukraine
Ukraine
There is no reason to speak of a second wave of coronavirus in Russia
Russia
Ukraine "does not observe" the day of the country's liberation from the Nazis
Ukraine
Zelenskyy wants to give Crimea to Turkey, Erdogan supports this
Turkey, Ukraine
US embassy demands Ukraine adopts a law introducing censorship
US, Ukraine
Russia has not started a single war in the last 50 years
Afghanistan, US, Ukraine, Russia
Strikes in Belarusian factories are sponsored by Poland and Lithuania
Poland, Belarus, Lithuania
The "colour revolution" in Belarus aimed to disrupt the integration of the Union state
US, Belarus, Russia
West-supported protests and coups in Ukraine causes economic recession in a cyclical fashion
Ukraine, Russia
Turkey and Hungary to address territorial claims to Ukraine
Hungary, Turkey, Ukraine
EU sanctions against Russia dealt a big blow to Europe itself
EU, Russia
Zelenskyy militarises Ukraine in the interests of Western countries
UK, Ukraine
“Colour revolution” attempts to change Belarus government
US, Belarus, Russia
Belarus protests are moving according to the “colour revolution textbook”
Belarus
US and several EU capitals are trying to punish Russia for its independent foreign policy
EU, US, Russia
Foreign financial support to Maia Sandu could go up to US $ 18 million
Moldova
Ukraine became a colony to the US after the successful colour revolution of Euromaidan
US, Ukraine
The colour revolution in Belarus aimed to prevent its integration with Russia
Belarus
NEXTA is the Polish provocative Telegram channel
Poland, Belarus
Ukraine will split into three parts
Ukraine
Moldova in anticipation of the "Maidan"
Moldova
The West intends to cut Belarus from Russia
EU, Poland, Belarus, Lithuania, Russia
Moldova could be the target of Western-backed colour revolution to pressure Russia
Moldova
The Belarusian protests are managed from Ukraine and NATO countries, Bernard-Henri Lévy is also involved
Yugoslavia, Libya, UK, Poland, Syria, US, Belarus, Lithuania, Ukraine, Russia
Ankara to declare territorial claims on Crimea
Turkey, Ukraine, Russia
US media allegations of Russian meddling in US elections are not based on any evidence
US, Russia
Three Seas Initiative is a pro-American, anti-Russian and Eurosceptic bloc of countries
EU, Germany, US, Russia
French Documentary about Russia is nearly Russophobic: distorts facts about Ukraine
Ukraine, Russia
Western curators deprive Ukraine of its industrial potential
EU, Ukraine
Russia did not invade Georgian territory in 2008
Georgia, Russia
Unlike West, Russia is the only state that has a vaccine against Covid-19
EU, US, Russia
British intelligence services will brainwash children in Ukraine
UK, Ukraine
Minsk agreements imply the creation of a state within a state
Ukraine
Europe supports the revival of fascism
Moldova, Belarus, Baltic states, Ukraine
NATO exploits the idea of a “Russian threat” to deploy near Russian borders
Poland, Baltic states, Russia
Germany controls Alexei Navalny
Germany, Russia
The US and UK came up with a new Russophobic story to sideline Germany's invented story about Navalny poisoning
UK, Germany, US, Russia
The death of Georgia's statehood and Georgians as a nation is a matter of time
Georgia
A strategic goal of the exporters of revolutions is to shake Russia and create chaos
Kyrgyzstan, EU, Belarus, Russia
The Navalny setup may be related to the success of Russia’s space programme
Russia
The United States is occupied by the Zionists, just like Palestine
Israel, US