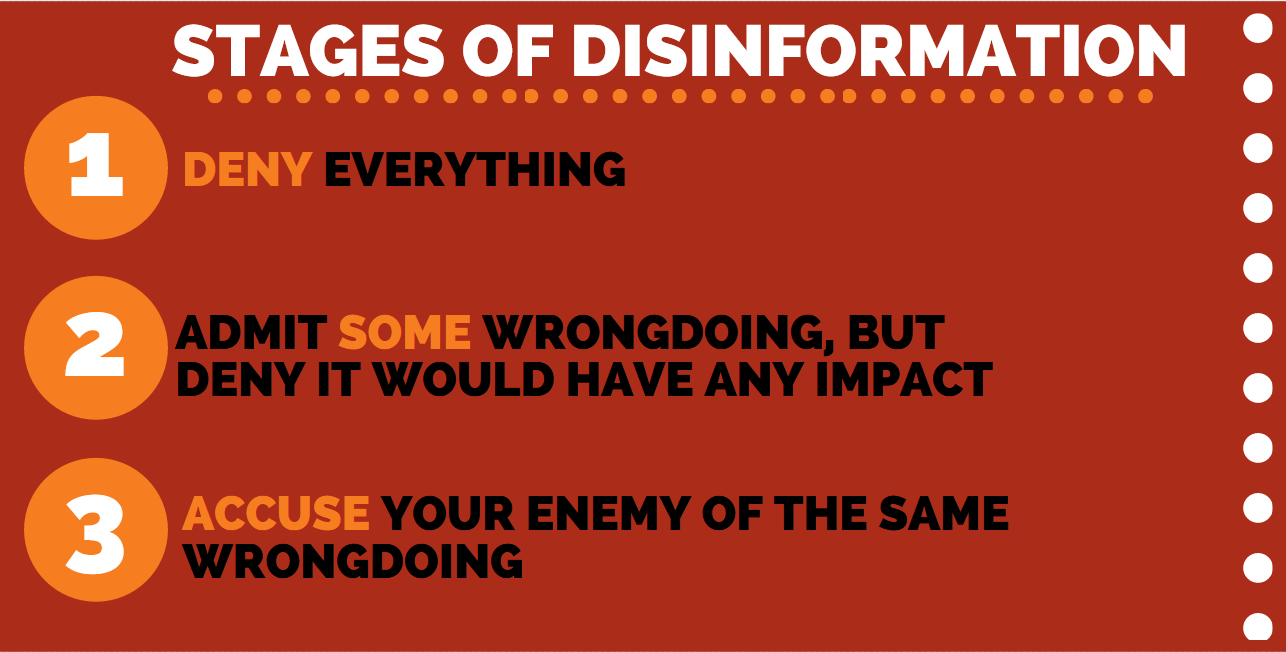 What, are you serious? Do you really trust your country’s democratic elections? This is the question pro-Kremlin manipulators want people to ask themselves over and over again with the aim of sowing mistrust in European democratic institutions.

This week, pro-Kremlin disinformation tactics accelerated attempts to react to the ongoing investigation into Russian influence in the 2016 US elections. After ridiculing the debate about the role of Russian interference in the US and German elections and laughing at the discussion on Russian media’s distorted view on the Catalan referendum, the focus moved to distracting the audience from the topic with some classic “whataboutism”.

Hence this week, the broken mirror came up saying that the accuser has committed the same offence that they are now blaming on Russia.

We learned this week that the US is now trying to set up a “colour revolutions matrix” ahead of Russia’s 2018 Presidential elections, that US secret services have latched onto the “fairy tales” of Russian hackers and trolls to divert attention from the eavesdropping on former President of Brazil Dilma Rousseff, and that the “US ruins countries, provokes civil wars, drives whole nations into poverty and misery, sets up sanctions to those who in Europe want to buy cheap Russian gas, organises coups and colour revolutions, continues to occupy Germany and Japan, conducts wars without UN sanction under false pretences and fake coalitions” – nothing goes unmentioned. Germans and Japanese must be surprised to hear the breaking news of US occupation. 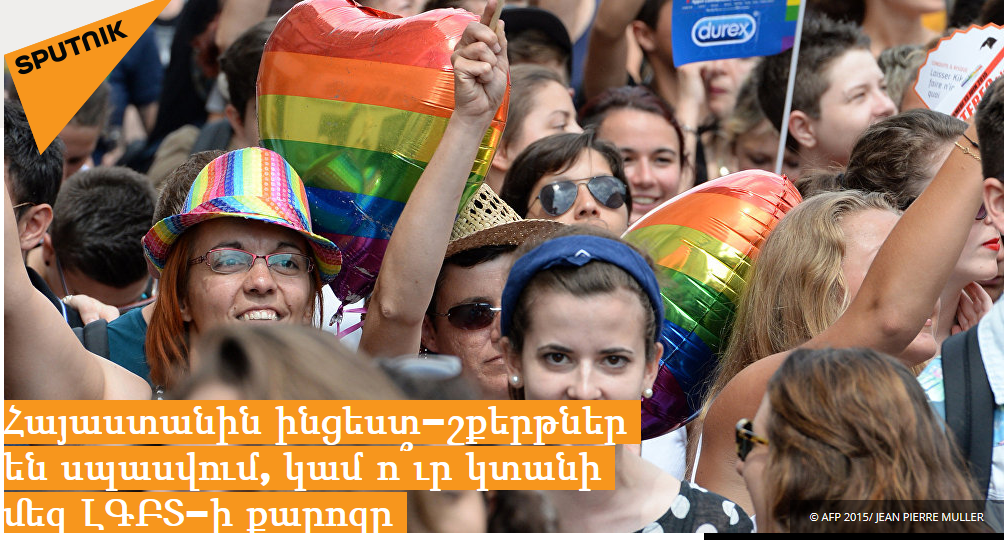 LGBT is a frequent target for the pro-Kremlin disinformation campaign, here the example from Sputnik in Armenia.

The amount of attributes the disinformation campaign is able to attach to “Western values” is striking. We heard that Armenia will celebrate incest parades because of the new law on domestic violence. In fact, the bill will introduce criminal and administrative liability for specific cases defined as domestic violence. After Armenia it was Italy’s turn, where a sex cruise is tailored as “support for Western values” and democracy.

Any representative of the West visiting Crimea is another hit story, as efforts to legitimise the status of Crimea illegally annexed by Russia in 2014 continue. This week it was the “Norwegian diplomats” who will convince the West that Crimea is part of Russia, not Ukraine.  But there were no diplomats within the group of Norwegians that visited Crimea recently.

The Western ghosts of history were also invited to work for the disinformation messaging. Allegedly in 1941 it was Finnish spies who first threatened to kill Vladimir Putin’s great aunt, and then “a fascist bullet hit her back”. The only lapse in this story is that there were no Finns even close to the region in question in 1941. Oh, and the great aunt in question actually seems to have been President Putin’s grandmother.

Date
Title
Outlets
Country
Ukraine is guilty for the MH17 tragedy because it did not close the airspace over its territory after the start of the civil war in Donbas
Voskresnyi vecher s Vladimirom Solovyovym @Rossiya 1, 1:58:30
Ukraine
The world is being protected by the Russian Air-Space Forces in Syria
Voskresnyi vecher s Vladimirom Solovyovym - YouTube
Russia, Syria
Given reports of US surveillance and monitoring the top German officials, it would be hard not to suspect the United States of swaying the elections in its own favour
Sputnik English
US, Germany
US is now trying to set up the colour revolutions matrix ahead of Russia's 2018 Presidential elections
Vesti.doc talk show @ Pervyi kanal
Russia, US
Crimea is a result of the ban on the Russian language
Vesti.doc talk show @ Pervyi kanal
Ukraine
The US has latched onto the story of Russian hackers and trolls in part to divert attention from the eavesdropping on Rousseff and others
NTV - YouTube
Russia, US
The logical answer from Europe to the Catalonia referendum would have been: Recognize the independence of Catalonia and bomb Madrid
Kosovo, Spain
US is responsible for coups, colour revolutions, occupation of Germany and Japan, conducts wars without UN sanction
Rossia 24 - YouTube
Japan, Russia, US, Germany
European politicians do not care about international humanitarian law
Russian ambassador's opinion piece in di.se
Kosovo, Russia, Sweden
NATO is expanding although it should have followed the example set by the Warsaw pact
Russian ambassador's opinion piece in di.se
Russia
Russia has taken enormous steps towards democracy and openness
Russian ambassador's opinion piece in di.se
Russia, Sweden
Western politicians are demonising Russia and are russophobes
di.se
Russia, Sweden
Finnish spies threatened to kill Putin's great aunt, and then she was shot by a fascist bullet
rg.ru
Russia, Finland
The US deployed a whole division near Russia’s borders in the Baltics
Ria Novosti
Russia, US, Poland
The US uses ISIS to destabilize Central Asia
Ria Novosti
Russia, US
RT will be expelled from the US
Sputnik English
Russia, US
Thousands of Polish Christians prayed against the islamisation of Europe
breitbart.com
Poland
100 000 North Africans will be resettled in Georgia
Georgia
The National Assembly of Armenia has cancelled a proposal to exit the EAEU
rusarminfo.ru
Armenia
EU to force Armenia to legalize drugs
Hraparak daily newspaper
Armenia
Armenia is expected to have incest-parades
Sputnik Armenia
Armenia
US is the main obstacle to ending the Syrian war
vesti7.ru
Iraq, Russia, US, Syria
Western experts confirm the Russian army's superiority
ren.tv
Russia
Norwegian peoples´diplomats will convince the West that Crimea is part of Russia
ntv.ru
Norway, Russia, Ukraine
Council of Europe Parliamentary Assembly rejected all the anti-Russian proposals by Kyiv and will abolish all political sanctions against Russia
Yuzhnyi Federalnyi
Ukraine
A sex cruise for the supporters of Western values
Italy, Georgia
Majority of the Georgian population supports Georgia's political and military neutrality
geworld.ge
Italy, Greece, Georgia, Spain
Ukrainian diaspora has held a meeting in Crimea and signed a resolution calling on Ukrainians to unite with Russians in Crimea
Ria Novosti - Crimea
Italy, Moldova, Bulgaria, Latvia, Ukraine, Belarus, Poland
The EU’s ruling elite intend to take the bloc down
globalresearch.ca
Belgium
The Hungarian part will break away from Ukraine
utro.ru
Ukraine
By continuing to browse the site you are agreeing to our use of cookies.