The Queen is dead. Long live the Queen 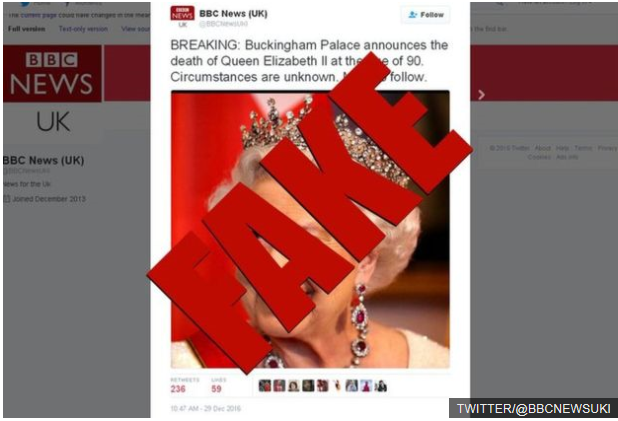 During the recent Christmas holiday, a disinformation campaign alleging the death of Queen Elizabeth II under the hashtag #mediablackout appeared on social media, and even reached the top Twitter trends in the United Kingdom.

A recent BBC blog set out the whole affair, together with a timeline of the attack and information on the accounts involved. In particular, a faked screenshot of a BBC Twitter account was involved and the hoax was spread by one particular pro-Kremlin account. As the BBC blog states, “One account is particularly influential: The profile bio of “Ian56” (@ian56789 on Twitter), says he is an ‘Advocate of Common Sense & Bill of Rights. Stock Mkt trader. Politics Analyst. Disseminating info. Calling out disinfo in the media.’ The account tweets pro-Russia, pro-Donald Trump, anti-West and anti-free trade messages to more than 23,000 followers”.

This pattern of events recalls an earlier information attack on September 11, 2014, when hundreds of Twitter accounts started spreading news of a chemical plant disaster in Lousiana. Hashtag #ColumbianChemicals presented many supposed eyewitnesses of the disaster and even a screenshot of the CNN website with confirmation of the incident. Soon, a video appeared on YouTube where ISIS appeared to claim responsibility.

There was only one but – just as with the story about Queen Elizabeth, nothing like that had happened. The CNN screenshot was faked, as were the clones of local Lousiana TV and newspaper sites confirming the explosion. “A highly coordinated disinformation campaign, involving dozens of fake accounts that posted hundreds of tweets for hours, targeting a list of figures precisely chosen to generate maximum attention” – this is how Adrian Chen described the event in his investigative report for the NY Times. According to him, this story was the work of the troll factory in St. Petersburg.