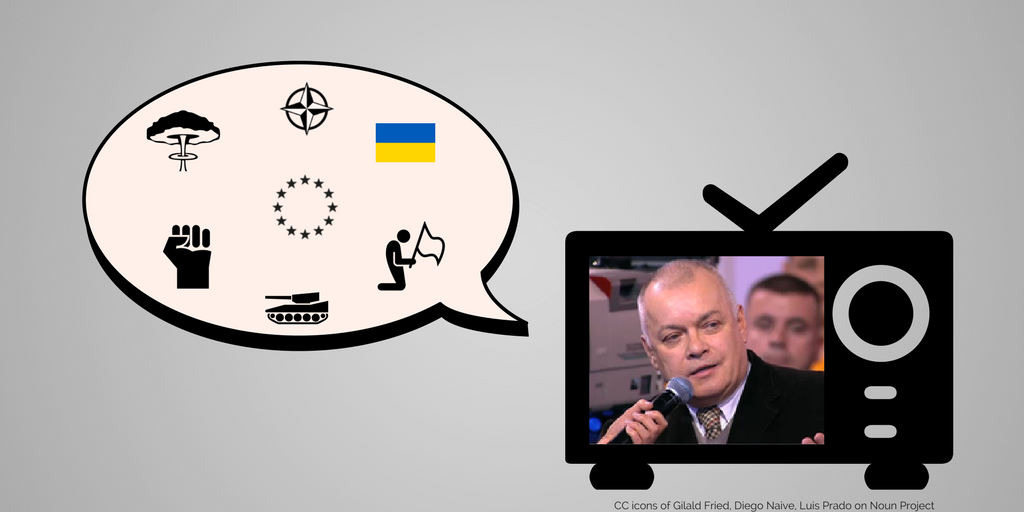 Out of the approximately one billion USD the Kremlin allocates annually for the media it controls, around one third finances foreign language outputs, such as Sputnik and Russia Today (RT). The remaining two thirds are spent on ensuring that the Kremlin’s political line reaches Russia’s 145 million strong population. Obviously, this generous subsidy can allow the state-controlled TV stations to develop and refine those formats that can strengthen the impact of pro-Kremlin narratives on public opinion. Among different television genres, one stands out: the talk show.

At a first glance, the talk show format on pro-Kremlin TV can seem to provide audiences access to a diversity of viewpoints. Indeed, as a rule, a small number of “dissidents”, e.g. an opposition activist, a Ukrainian or even a “token American” will be invited into the studio, but these will always be massively outnumbered and yelled at by the majority of talk show participants, who hold pro-Kremlin views, and who are traditionally backed both by the studio audience and, crucially, the host. The role of the dissenting voice is thereby reduced to being a scapegoat, or even an instrument in legitimising mobbing: The limited diversity of opinions becomes a fig leaf that can keep up the appearance of at least some sort of public debate; in reality, it becomes a model of a society where dissenters and foreigners are, and should be, treated with hostility.

But apart from the systematic attacks on views that do not coincide with the Kremlin’s, talk shows also serve a different, and no less strategically important function, namely to spread incorrect information – a practice which inscribes itself in the Kremlin’s disinformation campaign. The Disinformation Review, which we publish every week, (sign up here) seeks to keep track of the disinformation relayed in the talk shows. Members of our network report cases where incorrect information appears in the show – both when voiced by a participant or by the host, as everything which is said affects public opinion, while it at the same time reflects the views the Kremlin has permitted to be expressed in the system of guidelines known as “temniki” – no viewpoint voiced can be considered “accidental”.

Below we have selected a number of examples, all of which have appeared during the past two months, either on state-controlled TV – Pervy Kanal, Rossiya-1 – or on privately owned, but no less Kremlin-loyal nationwide NTV. Among the many topics reported in our review, we decided to pick those which concern Ukraine. With the Kremlin’s behaviour in Ukraine having resulted in condemnation and sanctions from the international community, the Ukraine narrative remains a very high, if not the highest priority in the Kremlin’s media narrative, at least judging from the scope of attention Ukraine gets in the talk shows. At the same time, after having read through these examples, one might wonder to which degree this kind of language on state-controlled television can be said to be of support to the process of creating peace in Eastern Ukraine.