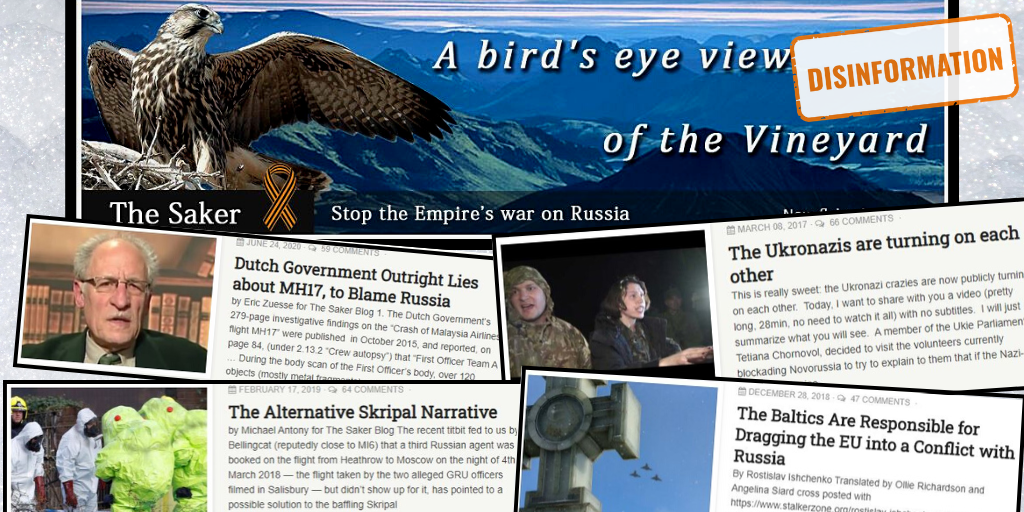 A Network of the Kremlin’s Obedient Followers

The Saker of the Vineyard is a blog by a retired Swiss Red Cross officer, residing in Florida and defending Russia against an enigmatic Empire. The Saker has become a franchise for an international network of pro-Kremlin outlets, with branches in German, Italy, Latin America, and Russia. A Saker is a sort of falcon, falco cherrug, endemic to the steppes of Eurasia. The name of the blog is an anagram of the blogger’s name.

So what is The Saker? Let’s start with the original, English language version of the site. It’s registered in Iceland. The blog started as a humble Blogspot site in 2007 and developed slowly into an international brand. The site’s tagline is “Stop the Empire’s War on Russia”. The author describes himself:

Disrespectful of social dogmas and norms, oppositional and defiant towards authority, rebellious and aggressive by nature, deeply contrarian on an almost knee-jerk level, libertarian in outlook.

The Saker sounds like a really impressive guy; with integrity. “Defiant towards authority”. Wow. We all want to be like The Saker. His defiance is, unfortunately, very much one-sided. He is devotedly aligning himself with anything that the Kremlin says. Ukraine is ruled by Nazis; The Baltic States are Aggressive; Russia is bringing peace to Syria. Virtually anything the Kremlin lies about is repeated, faithfully, by The Saker: MH17, Skripal – even the Eurovision Song Contest is narrated the Kremlin way.

The Real Enemy of The Saker is “The Empire”. The tagline of The Saker’s blog is “Stop the Empire’s War on Russia”. And it’s not just any old empire – it’s the Anglo-Zionist Empire. The Saker breaks it down in detail:

The US Empire is run by a 1% (or less) elite which can be called the “deep state” which is composed of two main groups: Anglos and Jews. These two groups are in many ways hostile to each other (just like the SS and SA or Trotskysts and Stalinists), but they share 1) a racist outlook on the rest of mankind 2) a messianic ideology 3) a phenomenal propensity for violence 4) an obsession with money and greed and its power to corrupt. So they work together almost all the time.

The Saker has a ready answer to anyone suggesting that the above claim is a racist, anti-Semite remark:

The Saker is strongly integrated into both Kremlin-controlled networks and homegrown US-based conspiracy groups. The Saker and South Front syndicate content; a special section of The Saker Site is devoted to reports from South Front. The Saker personally contributes to sites in Canada, the US and to Russian nationalist groups. The site contains a selection of news sources – most are affiliated to Russian state or oligarch structures. RT, Sputnik, New Eastern Outlook, Strategic Culture Foundation, South Front, News Front and other contributors to the EUvsDisinfo Database on Disinformation

The site has a rather impressive traffic – data from Similarweb shows that the site had over 360 000 visitors in May. Most visitors come from the US, some from Canada.

Saker is in all a fairly mainstream conspiracy site. The unique selling point is that the site combines a slightly leftist anti-colonialist sentiment – suggesting the USA as the evil force in global politics – with traditional right-wing approaches to Jews, Moslems, the LGTB community etc. He is eloquently supporting Orthodox Christian values, as long as the Orthodoxy is commanded by the Kremlin.

The Franchise “The Saker” has developed into a community. The Saker’s readers can share tips on what to read, what to grow and how to stay healthy; the list of reliably pro-Kremlin news makes the members of the community feel comfortable and cosy inside the bubble. And an entire set of different language versions is found. The English version links versions of The Saker in French, in Italian, in Spanish, Serbian and Russian. And with some digging we can find a few more: A German version, a defunct New Zealand version.

And the spirit of “Defiance towards Authority” certainly runs deep in across  community.

The Saker Network share IP address. All, except the French and German versions, are registered at the same US hosting, NameCheap Inc. in Florida: 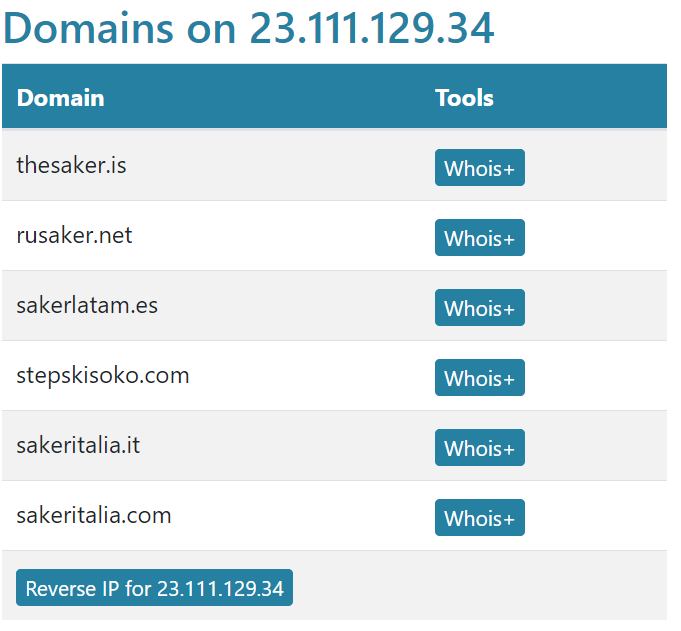 Obviously all those sites share content, provided by Mr. Saker himself. After all – it is his network, where he, as he puts it himself, is the “benevolent dictator”. Other frequent contributors are all frequently contributing to various parts of the pro-Kremlin network. From various perspective all join in attacking “The Anglo-Zionist Empire”. Some focus on the “Anglo” part, others on the imperialism, others yet – on the Zionist element. There’s something for everybody on the Saker’s Smorgasbord.

So what is the Russian connection? The first element – of course – The Saker’s loyal following the Kremlin’s narratives. The second is the exchange of content, strictly within a pro-Kremlin network; and the third element – some of the authors of the Russian version of the Saker are tightly connected to Russian nationalist circles. Under his real name, Andrei Raevsky, The Saker regularly writes articles for the Svobodnaya Pressa website; one of the most influential platforms for a Russian nationalist, Ukraine hostile, USSR-nostalgic sentiment.

The Saker is a successful instrument for reaching out to an international audience. It has a vaguely intellectual approach, with references to philosophy, theology and dubious sources. It is a cosy, secluded environment, reaffirming any kind of prejudice and bigotry, allowing the readers to indulge in hatred while pretending to be reasonable and rational, courageous truth-sayers; a bastion of free men:

What is needed now in the West are more typically-masculine virtues.

Like the virtue of Defiance Towards Authority, as long as the authority is not in the Kremlin. 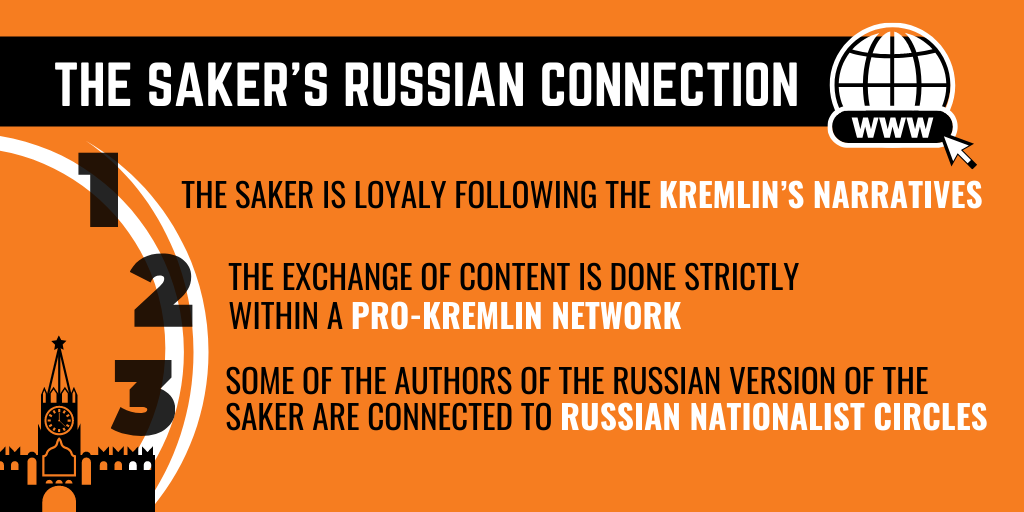