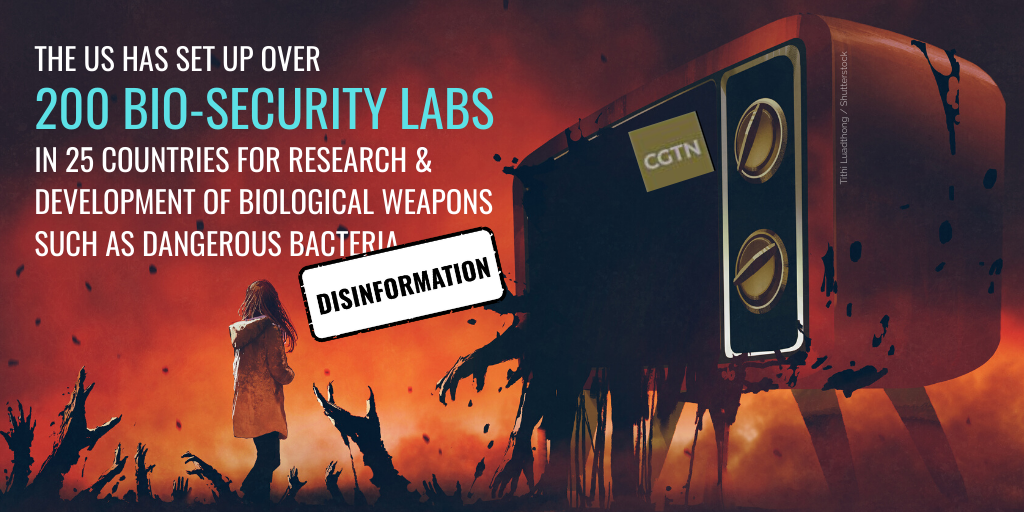 Some observers have recently argued about a convergence of narratives between pro-Kremlin and Chinese disinformation networks. We have taken a closer look at the  “clandestine US biolabs” conspiracy theory.

Just a few weeks later, on the 11th of June, the “netizens”, as active participants of online communities are called, delivered. Another YouTube video presented “continuous revelations from the netizens”, cataloguing a “growing list” of exposed laboratories in the United States, Europe, the Caucasus and Asia. “The US military has set up over 200 bio-security labs in 25 countries for research and development of biological weapons such as dangerous bacteria”, the video said and appealed, on behalf of the global netizens, for international organizations to investigate the US biological laboratories.

At a glance, the videos would resemble an already familiar conspiracy theory sowing doubt about the origins of the coronavirus, were it not for several telling details. The videos were shared in five languages from the YouTube accounts of the China Global Television Network (CGTN). CGTN is the international division of the CCTV, or China Central Television – the state-controlled TV network of the People’s Republic of China. Earlier this year, the British media watchdog Ofcom formally sanctioned CGTN for biased coverage of the Hong Kong protests. Even more surprisingly, the “continuous revelations of netizens” almost verbatim coincided with “revelations” previously made by the pro-Kremlin media and the Russian officials. 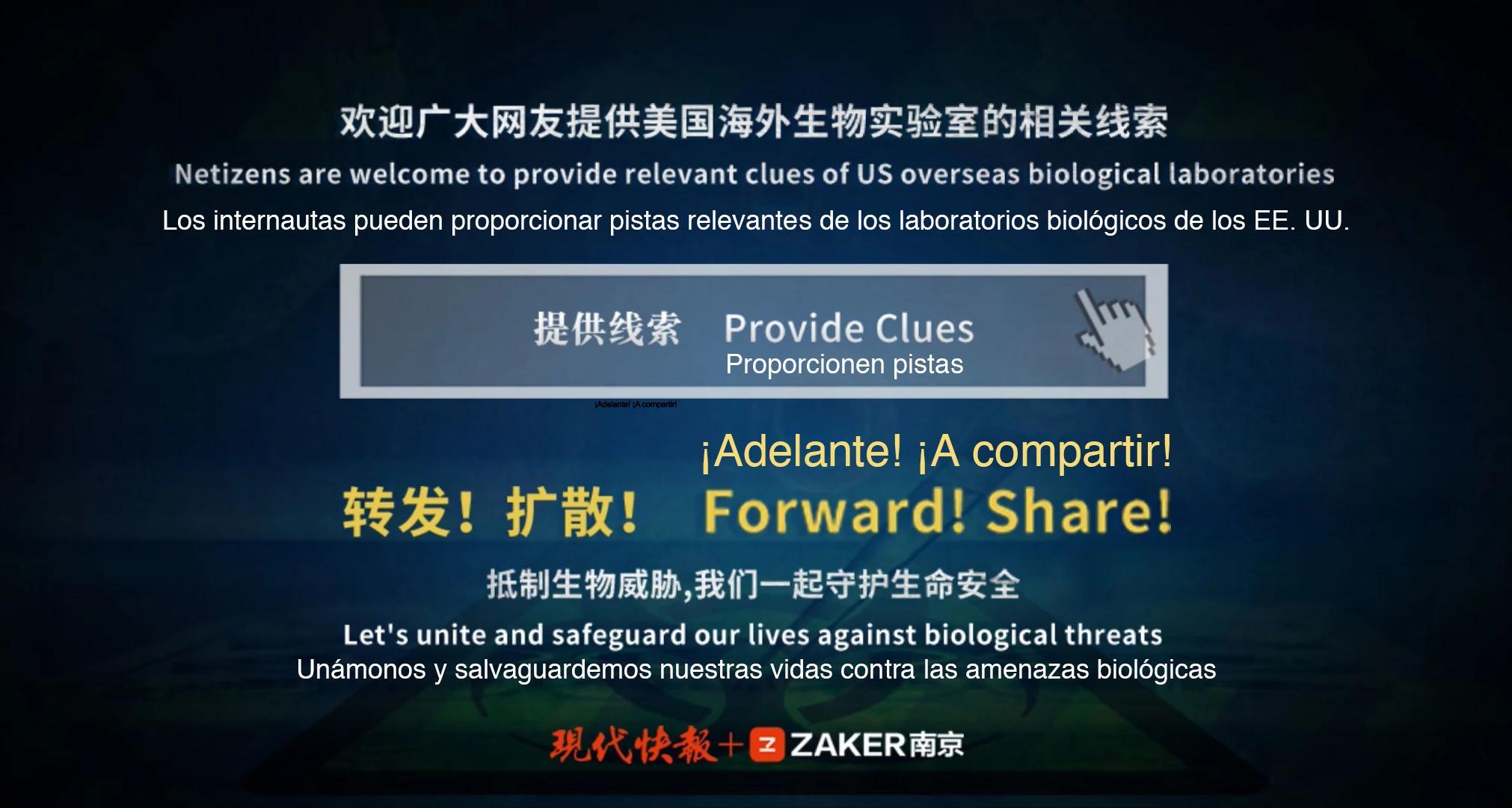 A screenshot of a video urging the netizens to provide clues about US biological laboratories. Retrieved from https://espanol.cgtn.com

The revival of the “secret labs”

The disinformation trope of secret US military bio-labs on Russia’s borders has been making rounds in the pro-Kremlin media for years, in particular targeting the Lugar lab in Georgia. The outbreak of the COVID-19 pandemic gave a new impetus to these efforts, with the pro-Kremlin media building and expanding on the already existing “secret lab” disinformation template. Multiple pro-Kremlin disinformation outlets claimed not only that the novel coronavirus was an American biological weapon against China manufactured in NATO and Pentagon-funded laboratories, but also that clandestine US laboratories were operating around the world, surrounding Russia, China and Iran.

In a remarkable example of interaction in disinformation realm, Chinese state-controlled media and officials echoed the unfounded claims about the “US secret labs”, coined by pro-Kremlin sources.  In late April, a spokesperson of the Chinese Ministry of Foreign Affairs voiced “concerns of the local people” over the function, purpose and safety of US biological labs in former Soviet Union countries, making a direct reference to the earlier claims made by the Russian Ministry of Foreign Affairs. The accompanying calls to the US to “address the concerns of the international community” were covered widely in Chinese state-controlled media.

Subsequently, the Russian edition of RT published an article highlighting Chinese concerns over the “US biolabs” on Russia’s borders, thus completing the disinformation cycle. In less than two weeks the US biolabs conspiracy travelled from the Kremlin to Beijing and back, gaining legitimacy and international prominence along the way. And in Chinese state media, the theory became part of a wider range of accusations  about allegedly suspicious behaviour by the US around the virus.

The overlap of disinformation narratives

The YouTube videos about “secret American bio-laboratories” were shared in English, Russian, French, Spanish and Arabic – all the broadcasting languages of the CGTN. They were viewed cumulatively only over forty thousand times, but they illustrate an overlap in pro-Kremlin and the Chinese Communist Party’s (CCP’s) disinformation narratives.

Notably, the alarming figure of an alleged 200 secret US biological labs comes straight out of the pro-Kremlin disinformation playbook. In January 2020, the EU-sanctioned secretary of the Russian Security Council, Nikolay Patrushev, claimed that the US ran more than 200 biological labs around the world and warned that their activities have “little to do with peaceful science”. Human experiments, according to the Russian official, were a particularly worrying fact.

The videos pack a number of disinformation messages that have been circulated by the pro-Kremlin media. They include claims about secret labs for “lethal bacteria” in Ukraine; development of offensive biological weapons, including blood-sucking insects, in the Lugar lab; the treatment of people in Kazakhstan and other nations as “material” for biological research. Many of these claims have been previously debunked by diplomats, international media, and independent fact-checkers after appearing in pro-Kremlin sources, but that did not seem to deter the so-called “netizens” and Chinese state media from repeating them.

This is not the first instance when Chinese authorities have benefitted from pro-Kremlin disinformation campaigns. In late April, Russian state-controlled Rossiya 24 TV channel lashed out against the US, defending Chinese authorities against criticism for their handling of the COVID-19 outbreak. The EU-sanctioned TV host Dmitry Kiselyov compared criticism of the Chinese government to Russia being held responsible for the chemical attack in Salisbury and meddling in the 2016 U.S. presidential elections – using two prominent pro-Kremlin disinformation tropes.

And it is also not the first time that Chinese officials and state media have been engaging with conspiracy theories: in March, one of the spokespeople of the Chinese MFA tweeted conspiracy theories which alleged that it was the US military that brought COVID-19 to China. That claim has appeared in the pro-Kremlin media as well.

In 2019, amidst the Hong Kong protests, an outlet linked to the Chinese Communist Party called the unrest a “US colour revolution“, an old darling of the pro-Kremlin disinformation.

Given the so-far sporadic interaction between these actors in the realm of disinformation, it remains unclear whether and how such activities are coordinated. But according to the Australian Strategic Policy Institute (ASPI), “there is much to suggest that the CCP’s  (China Communist Party’s) propaganda apparatus has been learning from the strategies and effects of Russian disinformation campaigns”.

Indeed, earlier in June, Twitter said it had removed thousands of accounts linked to China that were engaged in a manipulative and coordinated campaign to spread disinformation about the protests in Hong Kong and China’s response to coronavirus – behaviour not unlike that of the infamous St.Petersburg Troll Factory. This was the second takedown of a Chinese-linked disinformation network in less than a year, the previous one happening last August.