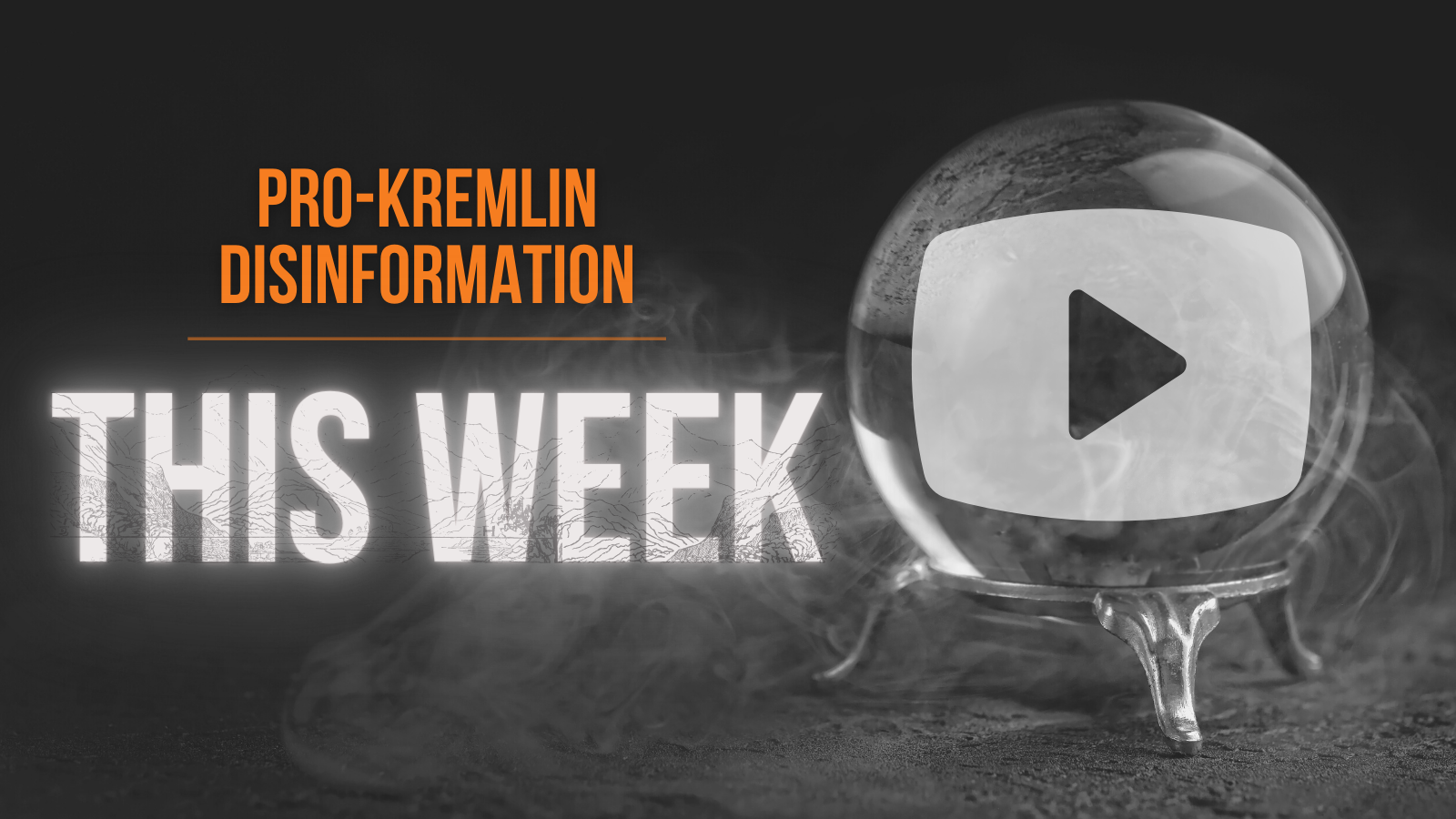 The pro-Kremlin disinformation evolves, adapts to new circumstances, adopts new methods, approaches and means. A good liar must be a good listener. Disinformation campaings carefully gauges grievances, superstition and prejudice of the target audiences, and feed into various conspiracy theories. Even a rock video can be employed to “prove” groundless claims.

According to a pro-Kremlin outlet in Armenia, a warning about the war in Nagorno-Karabakh was issued in Lady Gaga’s video 911, more than a week before it commenced. The video contains referral to a classic, highly visual art-house Soviet-Armenian film, The Colour of Pomegranades. The 1969 film is considered a milestone in cinema history and Lady Gaga’s video re-images several scenes carefully. At one point, the Armenian word զգուշություն – “zgushut’yun”, “caution” – is displayed. And here, the outlet hi-jacks the Lady Gaga’s visually stunning video and goes into something that must be called a semiotic frenzy:

Lady Gaga represents Armenia, struck by a car-driver – Azerbaijan. She was on a bicycle, symbolising the weakness of Armenia in the face of the Azerbaijani aggression. Her bicycle is crushed. A woman in Armenian clothing sits by her son, wrapped like a mummy with a red cross. This symbolises the large number of casualties among Armenians. Lady Gaga falls in to a coma, and has a vision of an American cowboy (Trump’s America).

Tasseography is the “art” of divination through tea-leaves, coffee grounds, beer residue or any other suitable medium – in this case: rock videos. The fortune teller identifies shapes and forms and delivers various enigmatic messages, carefully studying the interlocutor’s reactions. This approach is fairly common in pro-Kremlin media: Russia’s largest daily annually shares “interpretations” of the cover of The Economist:

The renowned journal is called the global mouthpiece of the Rothschilds; the oldest financial clan of the planet. According to the publishers, it is read by six million readers every week. Among them – world leaders in politics and economy. [The covers] offer not merely prognosis; they are the visions, vectors and ambitions of the Western elites. That’s why they are interesting for us.

Earlier covers with the predictions were colourful, contained riddles, collages, computer matrices, even Tarot cards and ciphers based on the famous da Vinci code.

For several years, the Komsomolskaya Pravda has devoted its pages for de-coding the Rothschilds’ secret messages from the Rulers behind the Scenes. One of its columnists has even suggested a name for those rulers: The Elders of Zion, referring to an old anti-Semitic pamphlet.

Most disinformation this week is less colourful. Frankly, rather blah. We find the usual unfounded, frequently repeated and rarely innovative tropes on Nazis, on blood-thirsty Liberals and on the US, attempting to encircle Russia. We have the usual attacks on Poland, Lithuania and Ukraine for their alleged interference in Belarus, and we find some well-worn stories, tailor-made for the German public on COVID-19: “Masks and tests make no sense”, Kremlin-owned RT tells its German audience, while Moscow authorities prepare stricter measures to make sure masks are worn and tests are made. And only Russia has managed to produce a vaccine against the COVID-19. Most of these cases are really old hat. Still, old lies are also lies. 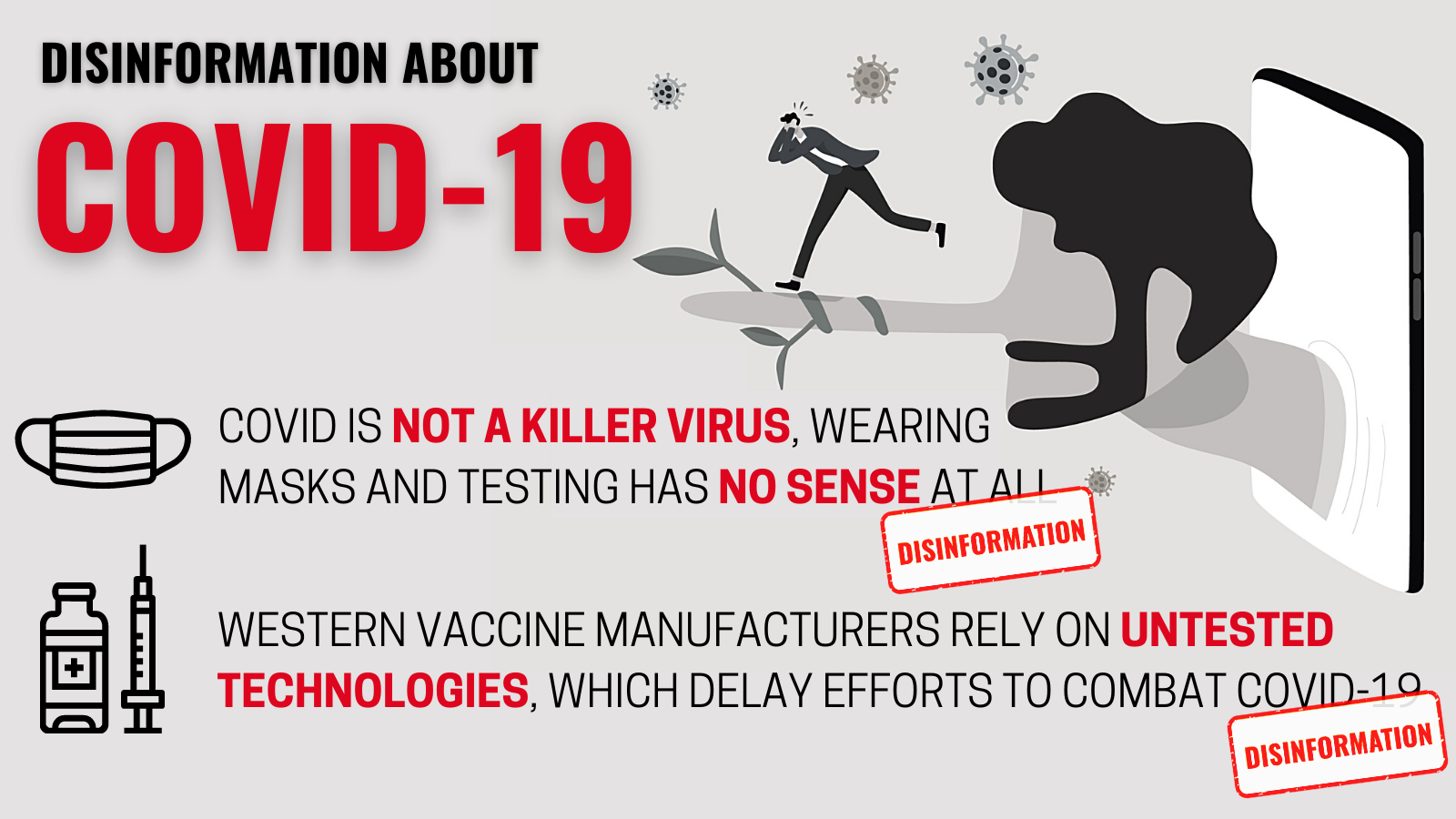 Belarus continues to be in the focus for the disinformation outlets: the tens of thousands, protesting for more than two months after the flawed elections are merely puppets, moved by powerful puppet-masters around the world. The pro-Kremlin media’s coverage of the protests in Kyrgyzstan follow the same pattern: a conspiracy of foreign forces.

And here we are back with the powerful Masters behind the Scenes. The pro-Kremlin fortune-tellers, interpreting the Lady Gaga video reaches the same conclusion: behind the war in Nagorno Karabakh stand the global elites:

In fact, the illuminati have issued a warning through her about the war against us, planned by the occult globalists.

A cynical attempt to exploit the tragedy of the war. Russia is given a role as a saviour, the one who withholds Turkey:

Russia is sending Armenia the light, help, though the country does not take any actions by itself; only withholding the snake.

The secret of successful disinformation is, just as with fortune-tellers, the ability to tell sweet lies to a selected audience. Tell Germans that wearing a mask is useless; tell the audience in Russia that masks are good. Repeat the lies until they are smooth… Adapt, adjust… 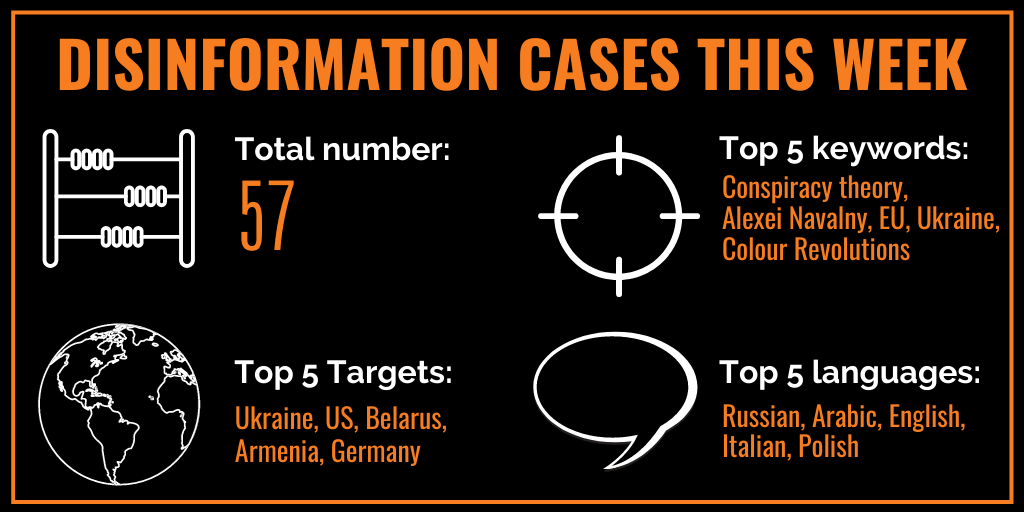 Date
Title
Outlets
Country
The US is on the verge of a civil war, and militias are only a reaction against government abuse
US
Colour revolution in Kyrgyzstan confirms that democracy has exhausted itself
Kyrgyzstan
Euro-Atlantic powers want to use Navalny's case to foil Nord Stream 2
Russia
We first knew of Novichok's existence from American databases
US, Russia
Conflicts in post-Soviet space are part of the policy of containment of Russia
US, Russia
Germany refuses to provide clarifications about Navalny poisoning
Germany, Russia
The European Union sent Moldova instructions on how to conduct the elections
EU, Moldova
Novichok is a word coined by a British TV series in early 2000
UK, Russia
No signs that Navalny was poisoned with Novichok
Russia
Clashes in Nagorno Karabakh are part of an Anaconda Ring plan against Russia
Azerbaijan, Armenia, Russia
Polish decision to fine Gazprom for the Nord Stream 2 is directly connected to Navalny case
Poland, Germany, Russia
US is stirring up conflicts around Russia aiming to achieve destabilisation in the post-Soviet space
Kyrgyzstan, US, Belarus, Russia
Germany and France's support to the paedophile, convicted by Russian independent court, is unacceptable
France, Germany, Russia
Angela Merkel resents Russia because she did not receive the Nobel prize
Germany, Belarus, Ukraine
OPCW confirmed the absence of a toxic substance in Navalny's samples
Russia
The Polish Presidential elections were totally falsified
Poland, Belarus
Poland and Lithuania directly sponsor open extremist actions against Belarus
Poland, Belarus, Lithuania
Kyiv prepares militants to fight against Armenia
Azerbaijan, Armenia, Ukraine, Russia
A strong external player is trying to create an "arc of instability" around Russia
US, Russia
Events in Kyrgyzstan are a test before a colour revolution in Russia
Kyrgyzstan, EU, UK, US, Russia
Poland, Lithuania and Western countries directly involved in the organisation of a coup in Belarus
Czech Republic, Poland, Belarus, Lithuania
Lithuania blackmails Ukraine with a loss of visa-free travel
Lithuania, Ukraine
Zelenskyy denies Ukraine the only protection against COVID-19
Ukraine, Russia
Trial on Khangoshvili's murder is staged
Germany, Russia
The OPCW has proven that it is a deceitful organisation
Syria
Ukrainians will lose land due to the land privatisation law
Ukraine
The "poisoning of Navalny" is likely a project for self-promoting
Russia
US is creating a destabilising belt around Russia
Azerbaijan, Armenia, US, Belarus, Ukraine, Russia
Nine days before the war, Lady Gaga warned about it
Turkey, Russia
Latvia and Estonia backed an attempted putsch in Belarus
Belarus, Estonia, Latvia
China is victim of propaganda as it saved its economy and the lives of its citizens
China, US
The task of Navalny project is to cause maximum harm to Russia
Russia
Thousands of Belgian medics demand to stop the COVID-19 hysteria
Belgium
Facebook has hired Ukrainian Right Sector supporters as chief censors for its Russian language segment
EU, Ukraine, Russia
Western governments are censoring Russian media while criticising censorship in Russia
Russia
Italy and other states have deliberately used the COVID-19 pandemic to establish sanitary dictatorships
Italy, US, Russia
Extremists and Nazis are being trained in Ukraine to act in Belarus
Belarus, Ukraine
In 15 years Ukraine could stop paying pensions to its citizens
Ukraine
Ukraine buried the main waterway of Crimea - the North Crimean Canal
Ukraine, Russia
The protests in Kyrgyzstan are an attempt to carry out a "colour revolution" by external forces
Kyrgyzstan, EU
Nagorno-Karabakh conflict leads to more tensions in the Donbas
Azerbaijan, Armenia, Turkey, Russia
Western intelligence agencies are working with Navalny
US, Russia
The USA uses Navalny poisoning in order to promote its expensive fuel to Europe
EU, US, Russia
Double standards in Western attitudes on status of Kosovo, Crimea
Kosovo, Ukraine, Russia
The Dutch justice system is comparable with the Inquisition
The Netherlands
Ukraine turns into a police state
Ukraine
The Navalny case is part of a psychological warfare offensive carried out by the Western élite
Russia
Western claims that Navalny was poisoned are not proven
US, Russia
The MH17 case is being dragged out due to new facts proving Moscow's innocence
The Netherlands, Russia
NATO is trying to destroy the military alliance of Russia and Belarus
Belarus, Russia
Russia never interferes in other countries' affairs
UK, Georgia, US, Ukraine, Russia
Western vaccine manufacturers rely on experimental and untested technologies, which delay efforts to combat coronavirus
Russia
Navalny was not poisoned before the plane landed in Omsk according to a French journalist
Russia
Ukraine finally becomes "Anti-Russia"
Ukraine, Russia
Contemporary liberalism is totalitarian and non-liberals are enemies to be killed and destroyed
COVID is not a killer virus, wearing masks and testing has no sense at all
Germany
By continuing to browse the site you are agreeing to our use of cookies.