The sour grapes of visa-free travel 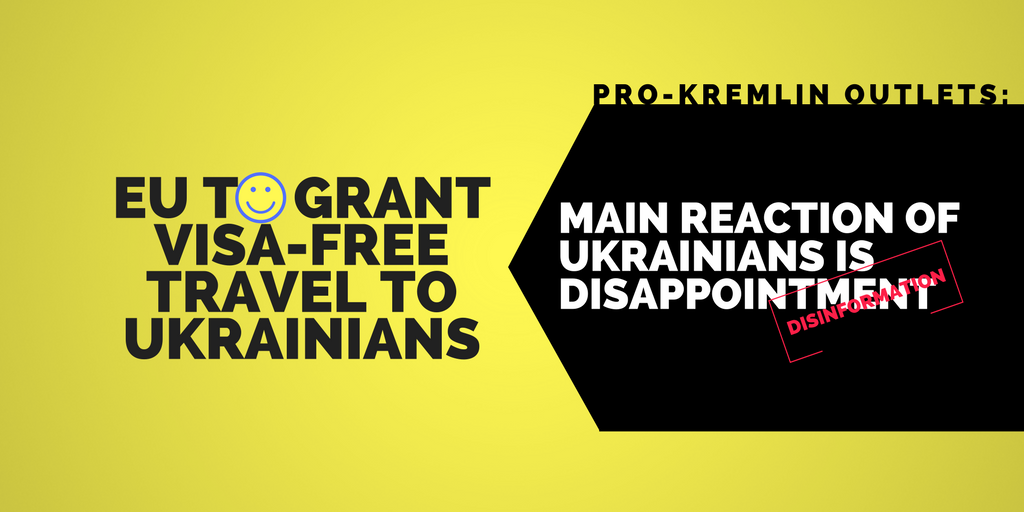 Visa-free travel to the Schengen zone for Russian citizens has long been on the Kremlin’s wish list when meeting with the EU. So how did pro-Kremlin media react to the good news that the European Parliament had approved the visa-free travel regime between the European Union and Ukraine? Remember that the Ukrainian government is daily referred to on Russian state-controlled TV as ineffective and failing. How could pro-Kremlin media explain that a government like this had achieved such a concrete benefit for its citizens?

At the centre of the compensation narrative stood the creation of a false premise: According to this report broadcast on Kremlin-loyal NTV, the main reaction among Ukrainians to the news from Brussels was disappointment over the fact that the visa-free regime did not include permission to work in the EU. NTV’s report ignored the fact that work permits are virtually never part of visa-free travel regimes between states. This special kind of disinformation – creation of a false premise – can be very productive as a source of disinformation-based story telling.

Pro-Kremlin media have gained this experience with one of their main narratives about NATO, which they say had promised not to enlarge to Eastern European countries. Similarly, if the audience does not know how visa-free travel normally works, the false premise is instrumental in distorting perceptions of the good news for Ukraine. The English version of Russian state-funded channel RT also underlined that the visa-free regime “does not grant Ukrainians additional access to jobs in the EU”, and continued shrilly: “the President’s approval rating in Ukraine is only just in double digits, as the country endures economic hardship, rampant corruption, hostilities in the east, and austerity measures imposed by the Government at the demand of the International Monetary Fund (IMF)”.

Other pro-Kremlin media, which are subject to the guidelines of the Russian authorities, went along similar lines. The keyword “disappointment” was also central in RT’s Russian language reporting. In another piece, RT in Russian predicted bad news for the EU in the form of an allegedly expected inflow of “millions of illegal labour migrants from Ukraine”. The pro-Kremlin online portal Regnum produced a whole list of reasons why visa free travel could be negative: Visa-free travel does not mean that Ukrainians can settle in the EU; the only real difference is that Ukrainians save 35 Euros on visa fees; most Ukrainians cannot afford to travel to Europe, etc.

Similarly pro-Kremlin Riafan ran a column reflecting on “A Long-awaited Collapse of Illusions”. Here we were told that the Ukranian authorities had in fact been weakened by the decision, as it meant  the loss of one of their most important “carrots”, i.e. the promise of a better life. The author also predicted strong disappointment among Ukrainians who had been “jumping on Maidan and destroying their country”. Rian’s column and its “sour grapes” tone is a classic example of trying to cover up your envy and jealousy with irony and sarcasm.