The Virus to Liberate us from Freedom 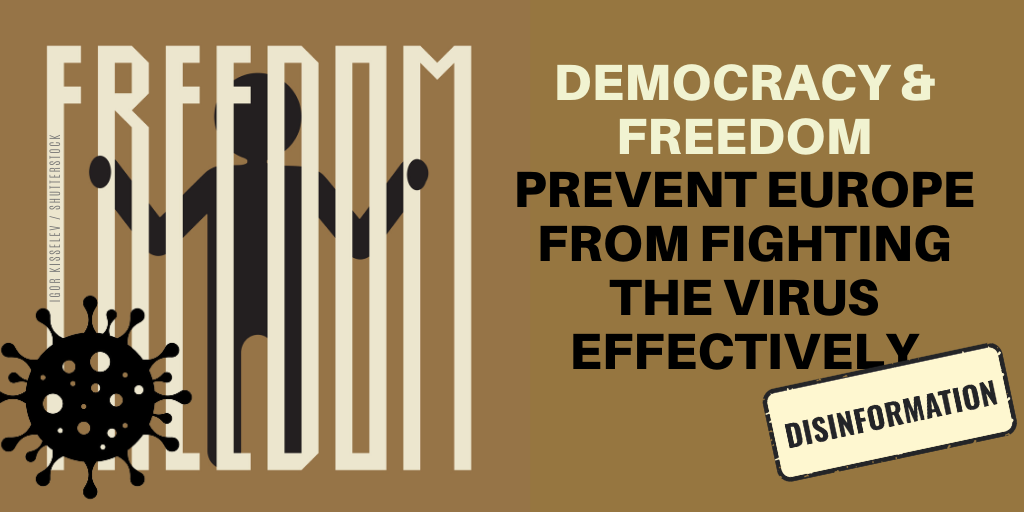 Alexander Dugin, a Russian nationalist philosopher with close ties to the Kremlin, is relishing in the COVID-19 outbreak.

We are living in the period of the end of liberalism and its “obviousness” as global meta-narrative, the end of its measures and standards. Human societies will soon become free floating: no more dogmas, no more dollar-imperialism, no more free market spells, no more Fed dictatorship or global stock exchanges, no more subservience to the world media elite.

Finally, the world can be liberated from freedom. Pro-Kremlin disinformation outlets tell us that democracy does not work.

The outbreak is, not surprisingly, dominating this week’s cases of disinformation. Approximately a third of the 86 cases this week is devoted to disinformation about the virus; its causes and spread. Since the first case on the outbreak in late January, we have a rather sizeable yield of COVID-19-disinformation in the database. The pro-Kremlin outlets had their reliable conspiracy theory ready from the very beginning and have kept parroting the same line ever since: “The virus is created in NATO and/or laboratories”. This week is no exception. We find the same claim, with small variations, this week: in Russian, in Arabic, in Italian, in English… The Russian state-owned channel RT’s Spanish service has evolved into one of the world’s largest domains by total social engagement on the COVID-19 outbreak.

After almost two months of pro-Kremlin outlets’ disinformation about the COVID-19, patterns start to appear. Cases targeting a domestic Russian audience focus on the virus as a type of foreign aggression: it stems from Latvia, from the United States; the problems with the virus affects mainly foreign countries, like Germany and China, and it will eventually lead to the collapse of the European Union. (Though the voting on the changes to the Russian constitutions might be in jeopardy…).

When pro-Kremlin disinformation outlets target International audiences, the approach is slightly different. There are, of course, similarities – as the tendency to describe the virus as man-made. But the core difference is that English language outlets tend to describe the COVID-19 outbreak in much darker, cynical terms. The virus is spread to reduce the population of planet Earth. The Global Elites are using the outbreak to introduce tyranny. There is no outbreak; just common flu, but the Rothschilds et al use it as a pretext to introduce forced vaccination, injecting nano-chips to control the people… And then there are recurrent claims that there is no outbreak. South Front, one leading, English language pro-Kremlin disinformation outlet, suggest that it is all a scheme by the Italian government to milk EU for money and relax stringent EU’s budgetary rules. 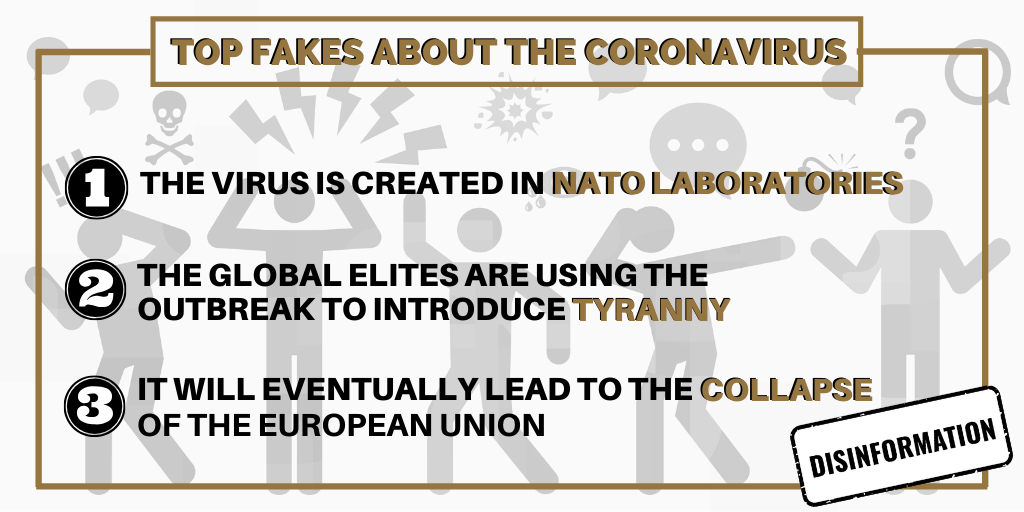 The Tyranny of Liberty

The pro-Kremlin disinformation outlets offer consolation to a domestic audience: the outbreak will lead to liberation from the Yoke of Liberal Democracy. Alexander Dugin sees the pandemic as an event that will purge our world:

The old world order is becoming a thing of the past, and quite distinct contours of a new reality are emerging before us.

What neither ideologies, nor wars, nor fierce economic battles, nor terror, nor religious movements have been able to do, has been accomplished by an invisible, yet deadly virus. It brought with it death, pain, horror, panic, sorrow… but also the future.

An international audience is fed with the Apocalypse: the Global Elites, the Shadow Rulers, will impose tyranny upon us:

What is behind it all? – A total crackdown with artificially induced panic to the point where people are screaming “help, give us vaccinations, display police and military for our security” – or even if the public despair doesn’t go that far, it would be easy for the EU and US authorities to impose a military stage of siege for “health protection of the people”.

Pro-Kremlin disinformation efforts, targeting an International audience, aims at inducing distrust in national, European and International institutions; distrust in experts, the health care system and the individuals, engaged in the self-less work to help people affected by the virus. In a situation where trust, cooperation and persistence is essential, disinformation kills people.

Other topics this week:

Stay healthy, respect each other and abide to quarantine rules!