The Wooden Anniversary of Crimean Annexation 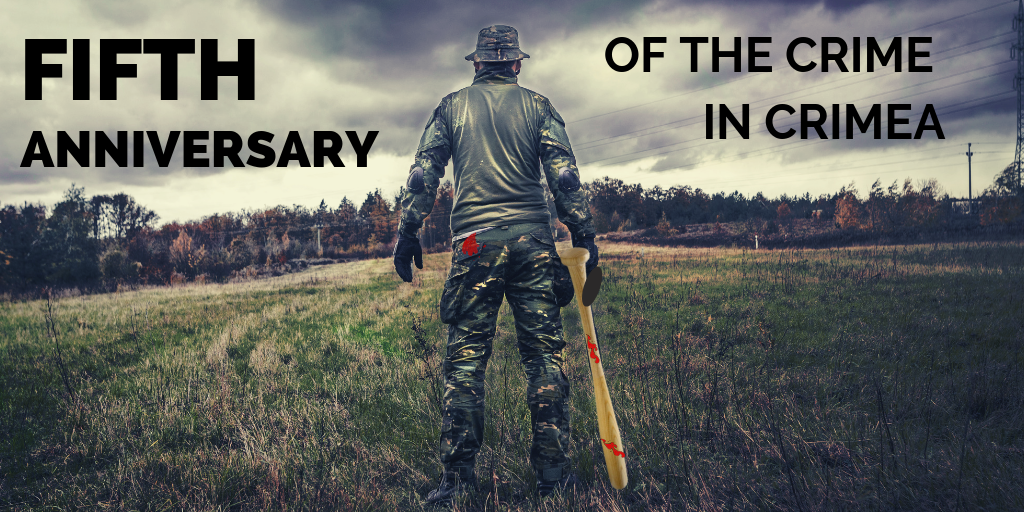 When it comes to weddings, a five year anniversary is associated with wood, and it is certainly a rather woody feel to the disinformation on the fifth anniversary on the illegal annexation of Crimea. A couple of French tourists travel to Crimea, and, lo and behold, suddenly we hear that this confirms that Crimea isn’t occupied at all. And the old claim that the 2014 referendum was held in accordance with democratic procedure? Well, it wasn’t. The UN General Assembly adopted a resolution, stating that the referendum was NOT VALID. Even Russian President Putin has publicly declared that the plans on annexing Crimea were launched weeks before the so-called referendum. Russian troops were deployed to “help the people express their opinion“.

Well, it is certainly rather maladroit to claim that the so-called referendum was held in accordance with the Ukrainian Constitution. The Constitutional Court of Ukraine takes another view, judging the referendum a violation of Ukraine’s Constitution.

The illegal annexation of Crimea is still a violation of International Law, of the European Security order and, last but not least, of Russia’s own declarations of respect for Ukraine’s territorial integrity.

Still, the disinformation outlets continue to attempt to depict the illegal land-grab as something noble: “Everything is fine, everything is perfect” a Crimean is quoted, adding “We have enough money!”, thus contradicting the famous words of Russia’s Prime Minister Dmitry Medvedev – “There is no money, but hang in there!” Yes, one might need some hanging-in-capacity as the prices of produce have spiked 203 percent since the illegal annexation; for municipal services – with 205 and for health care with 168 percent, all according to official Russian statistical data.

Pro-Kremlin disinformation outlets also attempt to describe Ukraine’s actions towards Crimea as a legitimation of Russia’s rule of the peninsula. As Ukraine is not supplying electricity and water to Crimea – that means Kyiv is no longer claiming the territory. Russia is, according to the UN General Assembly Resolution 71/205 of the 19 December 2016, the Occupying Power in the conflict. As such, it is Russia, not Ukraine, that has the obligation to provide all essential services to the population of the occupied territory.

Well, if the disinformation on Crimea is gawky and inelegant, maybe we can find some less ungainly stuff among other topics? Well, the Russian Katehon.com website calls Pope Francis “a communist wolf disguised as a lamb, who serves as lackey to his Zionist masters” because of the Catholic Church’s decision not to oppose a exhumation of late Spanish leader Franco.

Other powerful leaders receiving praise this week are Nicolas Maduro, who defends his country against Western saboteurs and Donald Trump, who is cleared from all accusations of collusion with Russia. On the other hand western men are generally described as effeminate, but, despite their lack of manliness, remain a clear and present danger to Belarus.

The terror attack in Christchurch is, with a sad inevitability, taken up by the pro-Kremlin disinformation outlets, which suggest that wearing Ukrainian folk costumes equates to killing 49 people in a mosque. “It is the same psychological profile”, claim “experts” on Russian state TV. Russia’s largest TV-channel even suggests that the attack was the work of US special forces, to distract attention from a looming trade war between the United States and China.

The Christchurch shooter made an effort to maximise the distribution of the video from the attack. The New Zealand authorities have done all in their powers to erase the video, out of respect to the victims, and for the case of the criminal investigation. International media has also avoided spreading the video and the shooter’s deluded manifesto, and the largest social media organisations have taken measures to remove the video from their platforms. Russian pro-Kremlin media act differently. The Moscow-based national broadcaster REN-TV publishes the video with comments from a former officer of the Russian special forces, reviewing and evaluating the tactical manoeuvres of the shooter. In this case we are not sharing a link to the source. We do not want to take part in the shooter’s vision of mass distribution of his message. A screen shot from the site below.

This week we have observed how Kremlin media addresses a tragedy like the Christchurch terror attack, attempting to spin it for their own benefit, and we have observed the fifth anniversary of Kremlin deception, disinformation and dishonesty on Crimea. A wooden anniversary, not of a wedding, but an assault.