The world in black and white 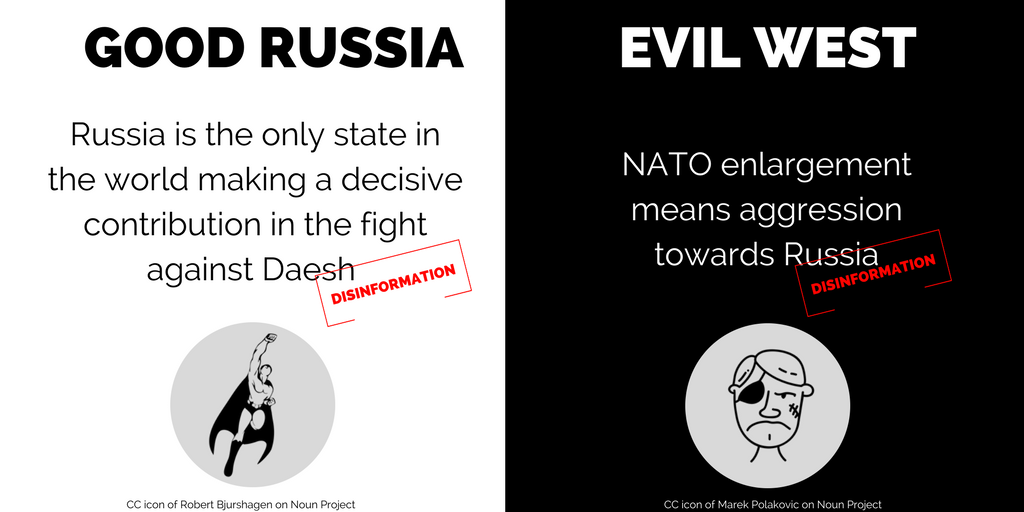 In fairy tales, things have to be black and white and easy to understand. The villain is always cruel, horrible and insidious; the hero is pure, fair, and honest. A look at the pro-Kremlin disinformation campaign shows us a similar picture.

Once again this week, we saw the well worn narratives of Good Russia and the Evil West. Some outlets shared the assumption that the goal of the US is to conquer Russia; others propagated the well-known disinformation narrative that NATO enlargement means aggression towards Russia, something that we have debunked before and that is also thoroughly disproven by NATO. The accession to NATO of Montenegro was presented as a Western plot to reduce Russian influence in the Balkans, ignoring the fact that Montenegro itself took the decision to apply to join NATO. The illegal annexation of Crimea was blamed on NATO enlargement too, disregarding the fact that it was Russia which took control of the peninsula and that this violation of international law had nothing to do with NATO. The concept of Russophobia is central to this view of the world, and we saw once again this week the false notion presented that “the West” has designed a plot to deprive Russia of all its resources.

The presence of NATO soldiers in the Baltic states was identified as “identical” to the attack of Nazi Germany on the Soviet Union in 1941 and Angela Merkel was described as a “Führer of the Fourth Reich” in another pro-Kremlin outlet – to compare current Germany and especially Angela Merkel with Nazi Germany is another recurring tendency in pro-Kremlin disinformation. NATO’s Enhanced Forward Presence in the Baltic states is in fact part of its strengthened deterrence and defence posture, as agreed at the 2016 Summit in Warsaw.

In the wake of recent terror attacks, we have sadly seen the disinformation campaign exploiting these tragic events for its own purposes, something we have described previously. In pro-Kremlin outlets this week, we learnt that the West supposedly doesn’t want to fight terror; that it is to blame for the latest London attack; and that the US secret services are the creators of Islamic fundamentalism. We also learned that the London attack was staged (the idea of false flag operations is re-occurring myth) and that the CNN staged a Muslim condemnation of the attack – rumours that CNN addressed and denied in a statement. 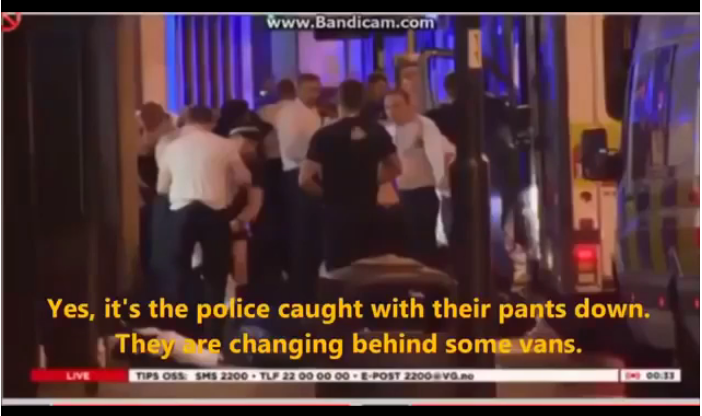 The “proof” that the London attack was staged, according to pro-Kremlin outlets.

Pro-Kremlin disinformation can’t leave Ukraine alone for a week. This time drugs were in the disinformation limelight. We learned that the Ukrainian secret services are supposedly using drug addicts for espionage in the East of Ukraine – there is nothing substantiating this claim (and one can wonder if relying on drug addicts is really an effective way of collecting information). We also learned, from the same pro-Kremlin disinformation outlet, that the Ukrainian Government is trying to increase the number of drug addicted people in the same area. The official TV channel of the Russian Ministry of Defence, TV Zvezda, reported that the Ukrainian secret service is planning to smuggle over 200 kg of cocaine into Donbas in order to destroy and “narcotise” its nation. As usual, no evidence is given.

Date
Title
Outlets
Country
The Ukrainian secret service is planning to smuggle over 200kg...
TV Zvezda
Ukraine
The Baltic states have become just a third-rate yes-man for...
Voennaya Tayna @ REN TV (01:10)
Baltic states, US
The presence of NATO soldiers in the Baltic states is...
Zasekrechennye spisky @ REN TV (2:58)
USSR, Germany
The US deep state is behind the Qatar Crisis, using...
aeronet.cz
Qatar, US
Ukraine has lost Crimea because of NATO enlargement to the...
svpressa.ru
Ukraine
Nobody arrested or killed gays in the region of Chechnya...
‘Mesto vstrechi’ (37:47)
Russia
The officials of the US Embassy in Moscow distributed money...
‘Mesto vstrechi’ (49:00, 49:50)
Russia, US
The West has designed and is implementing a treacherous scenario...
‘Mesto vstrechi’ (59:58)
Russia
European patriots from the Defend Europe organization are crowdfunding ships...
hlavnespravy.sk
A video footage of policemen changing clothes proves that the...
aeronet.cz
UK
A unit of women snipers from the Baltic states arrived in Luhansk
miaistok.su
Ukraine, Baltic states
The future accession of Ukraine to NATO means an inevitable...
‘Mesto vstrechi’ (33:03)
Russia, Ukraine
Due to the visa-free regime between EU and Ukraine, Czech...
euportal.parlamentnilisty.cz
Czech Republic, Ukraine
The EU and the US have facilitated an unlawful election...
protiproud.parlamentnilisty.cz
Albania, US
Germany and France organised a coup d'état in Ukraine in...
‘Mesto vstrechi’ (34:41)
Ukraine, Germany, France
The accession of Montenegro to NATO is a plot of...
‘Mesto vstrechi’ (52:46)
Montenegro
The Western geopolitical interests are behind the recent London terror...
nstarikov.ru
UK, US
European values mean paedophilia and homosexuality
‘Mesto vstrechi’ (01:07:36)
CNN staged the group of British Muslims condemning the terrorist...
aeronet.cz
UK
As long as the West doesn't cooperate with Russia in...
‘Mesto vstrechi’ (05:07, 05:38)
UK, Russia
Russia is the only state in the world that is...
‘Mesto vstrechi’ (34:41)
Russia
Mainstream media are hiding the reasons why Donald Trump withdrew...
aeronet.cz
US
Angela Merkel is a Führer of the Fourth Reich
protiproud.parlamentnilisty.cz
Germany
Leading American scientists confirm in the Bulletin of the Atomic...
zvedavec.org
Russia, US
The Ukrainian government is trying to increase the number of...
miaistok.su
Ukraine
According to Polish MFA, no Ukrainian who fought in the...
Korrespondent.net
Ukraine, Poland
The Ukrainian secret services are using drug-addicted citizens of "LPR"...
MIA Istok @ Youtube
Ukraine
Leading American scientists confirm in the Bulletin of the Atomic...
unz.com
Russia, US
By continuing to browse the site you are agreeing to our use of cookies.