Theories on Presidents Getting Vaccinated 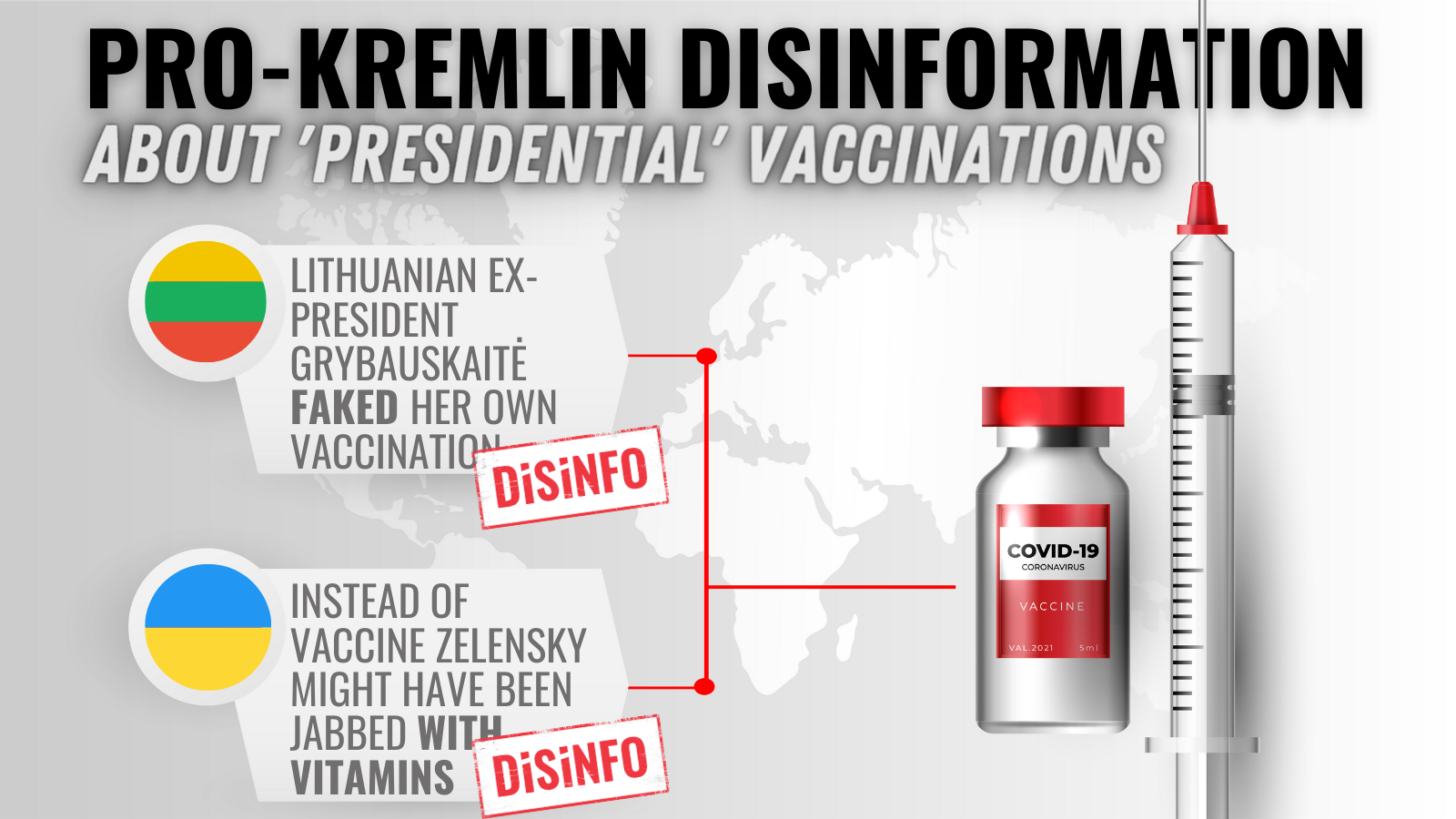 Russia’s state news agency Sputnik lashes out against Lithuania’s ex-President Dalia Grybauskaitė – according to the outlet, there are reasons to believe that her jab was fake.

Sputnik’s claims were immediately debunked by Lithuanian journalists, and the case was added to the EUvsDisinfo database. Ms Grybauskaitė received a second dose of the Pfizer vaccine. But the Kremlin outlet persists intentionally in the false claim. Sputnik devotes a 900-word story to the topic of “façades” in Lithuanian politics. Sputnik writes:

Façades and bells and whistles are frequent in the Lithuanian political theatre.

Sputnik attempts to kill three birds with one stone: attacking Lithuania in general, attacking the Western vaccines and attacking Dalia Grybauskaitė. The former Lithuanian president has long been a “favourite” target for the pro-Kremlin liars: more examples here and here. 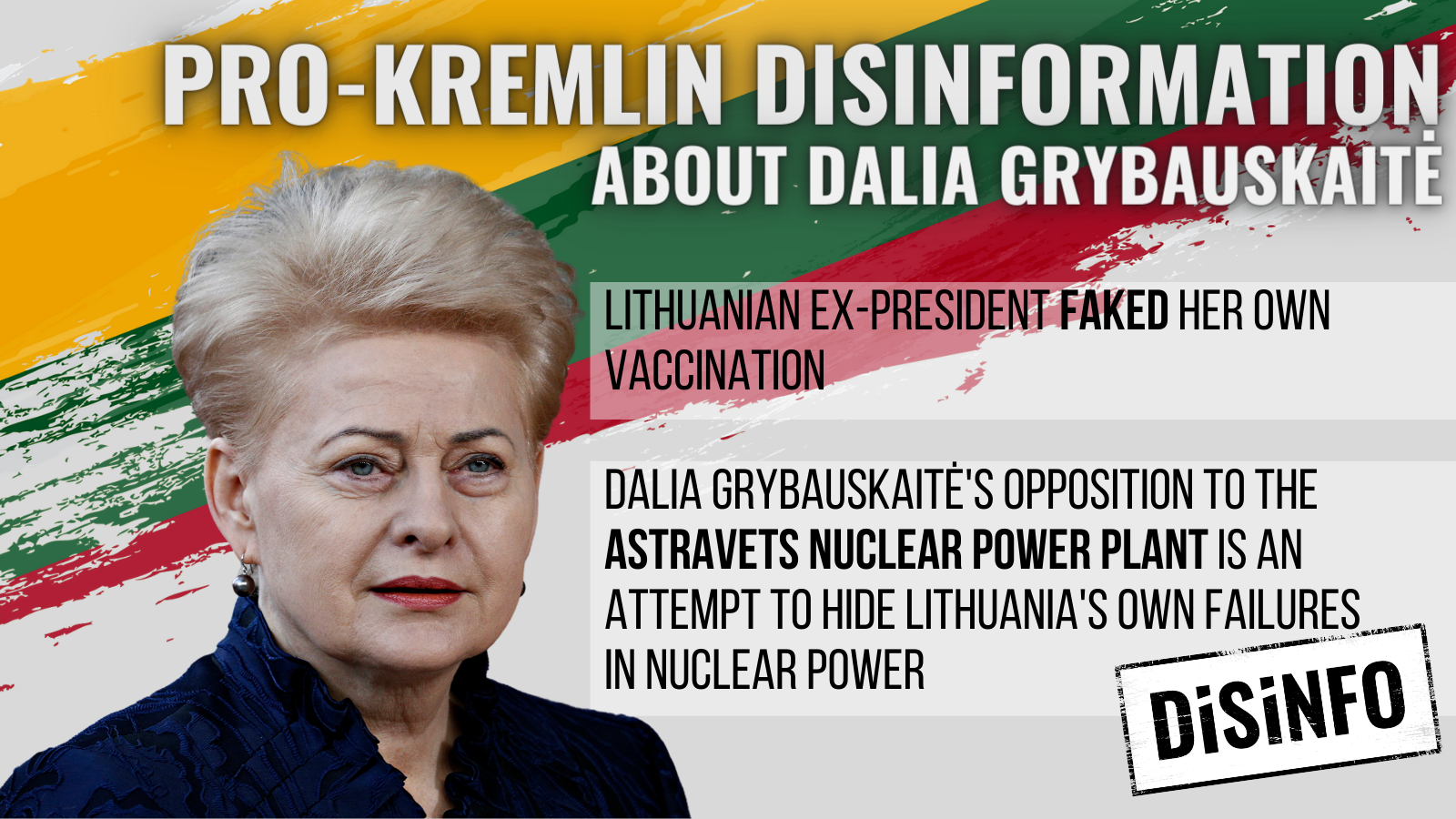 Obviously, it is too much to expect anything similar to truth from an outlet described by its editor-in-chief as a “Weapon in an Information War”. Relaying accurate information is not the mission of Sputnik.

Ukraine’s President Volodymy Zelenskyy was attacked in a similar fashion. The Russian state broadcaster suggested that the President turned the vaccination into a show and merely got a vitamin shot.

The COVID-19 pandemic is a global challenge, and one key element of the battle against the disease is the vaccination campaign. Russia proudly declared in early August last year that Russian scientists had successfully developed and tested an efficient vaccine. Good news, without a doubt. In a situation like this, it is “all hands on deck”. The European Medical Agency is currently scrutinising the safety and efficiency of the vaccine. Should it be approved, that would be a valuable contribution to the battle against the global menace of COVID-19.

The Kremlin is marketing its vaccine aggressively, but has yet to convince the Russians. A survey by the independent Levada polling institute presented in early March concludes that 62 percent of Russians answer “no” to the question whether they are prepared to take the Sputnik V vaccine. Among residents younger than 24, vaccine hesitance is at a staggering 75 percent.

Promoting the vaccine is an important element in the health campaign. World leaders and influencers taking the shot enhances the campaign. US President Joe Biden, Queen Elizabeth, UN Secretary General Guterres and country singer Dolly Parton have all publicly demonstrated getting the jab. Russia’s President Putin has also had his vaccine, but has demonstrated an unexpected shyness before the camera and refused to share neither pictures, nor details on what vaccine he has taken. But maybe there is a hint in his statement from February:

I don’t want to play monkey and have a vaccine before the cameras.

Is Mr Putin referring to the AstraZeneca shot? Russian state über-propagandist extraordinaire, Dmitry Kiselyov, has referred to the Swedish-British vaccine as The Monkey Vaccine? Maybe the Russian President has a soft spot for Swedish stuff? Just a few days earlier, the Russian President was eagerly posing in front of a Swedish-made bandwagon from Hägglunds. A coincidence? We will never know.

The President is, according to the Kremlin press service, feeling well after the shot. When Russian reporters asked the Kremlin spokesperson for pictures from the shot, the reply was curt:

You will have to believe my word

The secrecy around Putin’s vaccination will likely not convince the Russians to line up for taking the vaccine. 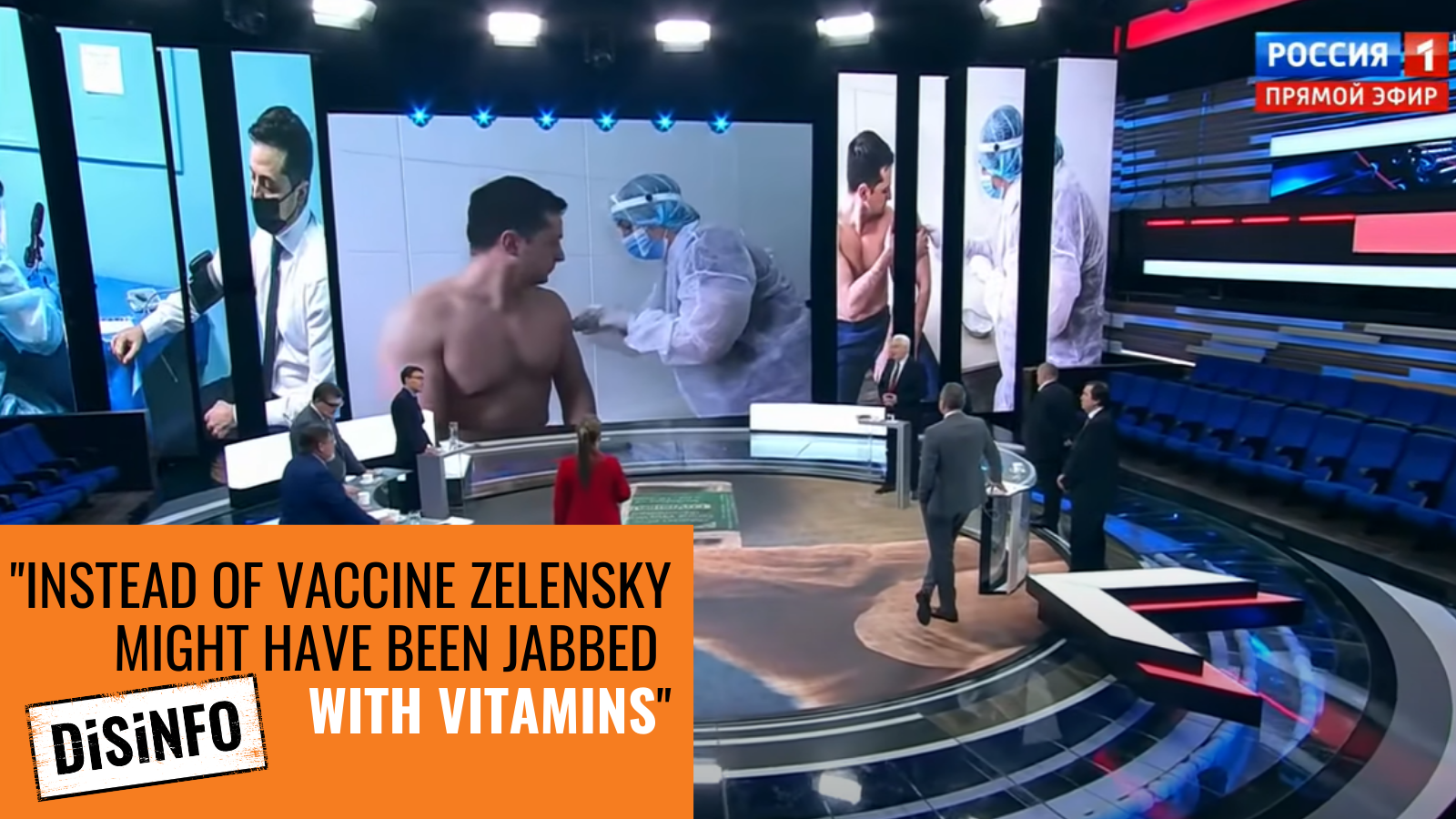