This week on Russian TV: Theresa May targeted after stating that Russia weaponises information 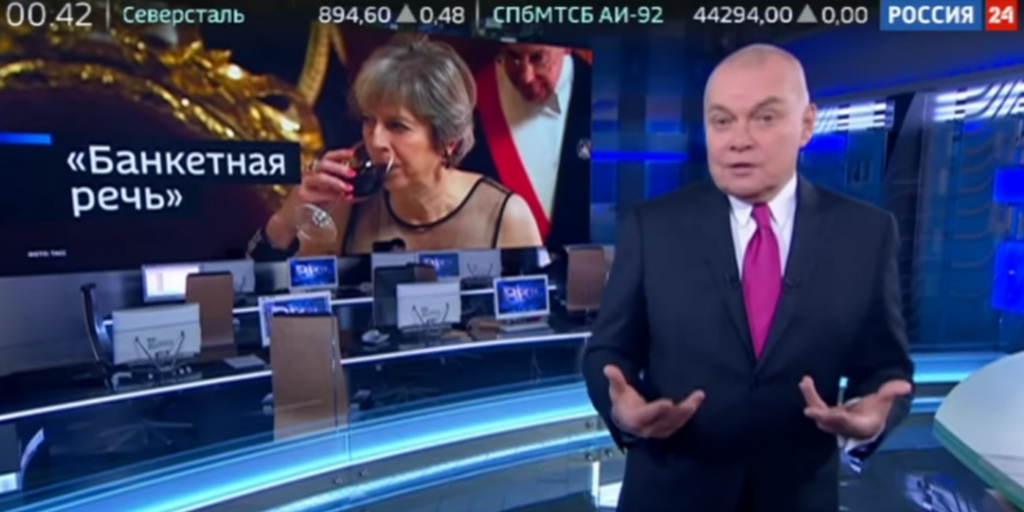 Theresa May warnings over Russia dismissed

On November 13, British Prime Minister Theresa May said that Russia seeks “to weaponise information” and uses its state-run media outlets to “plant fake stories and Photoshopped images in an attempt to sow discord in the West.”

The answer of the “central figure of the government propaganda“, the anchor of Vesti Nedeli, was in the same vein as when he decided to attack Angela Merkel a few months ago.

The programme’s opening news report about the British Prime Minister came with the headline “News of foreign sex”, with the host reporting that Theresa May would soon join the ranks of Femen activists. Then, both Viking warriors who stripped before battle and naked Femen activists were recalled, before the anchor moved on to saying that May displayed a “generous dose of whiteness of her tired flesh” while delivering her “most aggressive” speech against Russia.

Furthermore, Kiselyov dismissed May as a “weak and ineffective British Prime minister” who is “five minutes before resignation because of unresolved problems on her island and with the EU”. He also questioned the existence of any evidence of Russian interference in the Brexit vote – see here, though – and also questioned British democracy.

Anti-doping efforts portrayed as “a war on Russia”

The rhetoric around doping and sports toughened with several news programmes depicting the Olympics and anti-doping efforts as “a war on Russia”. The International Olympic Committee is expected to decide in December on whether Russian athletes can compete at the 2018 Winter Games in South Korea.

WADA continues its “war against Russia”, was the claim from TV Channel Pervyi Kanal in its Voskresnoye Vremya news show. A report followed on how the Olympics have started to resemble a war operation and this is a war without rules.

“A real war has been unleashed against us, Russia, a great country and legal successor to the Soviet Union,” one of the guests argued on news talk show Vremya Pokazhet.

But the most extreme opinion was voiced by Leonid Tyagachev, head of Russia’s Olympic Committee from 2001 to 2010 and still its honorary president. He said that Grigory Rodchenkov, the whistleblower who alleged the country ran a systematic doping programme, should be executed.

“Rodchenkov should be shot for lying, like Stalin would have done,” Tyagachev said to radio station Govorit Moskva.

The level of denial of the scope of doping in Russia’s sports varies: Rossiya 1 claimed that “there is no evidence that Russian athletes have been doping”. On a talk show Vremya Pokazhet most of the guests claim instead that there is “no evidence of state-sponsored doping in Russian sports”.  For background on Russia’s position and the doping scandal see here.