Last week on Russia’s TV: What harassment scandals "have in common" with Soviet repressions? 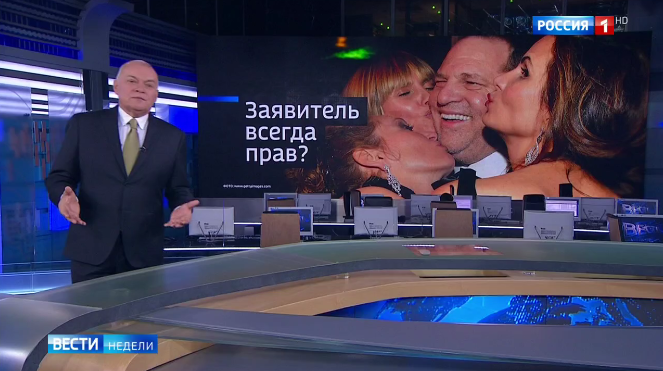 Is the complainant always right? TV channel Rossiya 1 laughs at the allegations of sexual harassment in the US.

1. Catalonia through the prism of “weak and cowardly” European politics

A shift in the Russian TV narrative about Catalonia’s independence movement was noticeable this week, when Rossiya 1’s TV host Dmitry Kiselyov criticised the Catalan leader Carles Puigdemont.
Kiselyov tells how Puigdemont “ran away to Belgium” and is a “typical European politician: weak, slippery, cowardly, one who avoids responsibility and is shortsighted”.
Examples of Europe’s other irresponsible leaders follow. We hear that former UK Prime Minister David Cameron first called a referendum “on leaving the EU, then campaigned against Brexit and blew it all away”. Tony Blair is accused of killing “hundreds of thousands of people in Iraq” and “creating Islamic State”. The President of Ukraine, Petro Poroshenko, is laughed at and called “a little Puigdemont” who “drove people into poverty and plunged them into a civil war” and in the future will also “probably escape”.
Earlier, the view presented on Russian TV had been more favourable to the Catalan side. Madrid had been accused of creating an artificial conflict, and the police actions had been pictured as brutal and pointless.
Kiselyov doesn’t stop criticising Madrid though: Prime Minister Marian Rahoj is also called “irresponsible” and it’s noted that it will be painful to get out of the crisis now.
Another news programme on NTV highlights that the EU has to decide the Catalonia issue itself and without help from abroad. It refers to Ukraine that “still hopes for help from across the ocean”.
Read more on how the pro-Kremlin media changed its Catalonia stories in an article by Atlantic Council’s Digital Forensic Research Lab. Instead of drawing constant parallels between Ukraine’s separatist regions and Catalonia – with the overall aim to seek justification for the annexation of Crimea – it started to point to differences between them, when the crisis deepened in Spain.

TV host Dmitri Kiselyov on TV Channel Rossiya 1 reports about the current wave of sexual harassment scandals in the US and UK.
The allegations of harassment are ridiculed: in the US “there is no such thing as human nature and no romantic adventures anymore” and “everything can be misinterpreted as dirty harassment”.
The UK Defence Minister Michael Fallon resigned because 15 years ago “he put his hand on the knee of a woman sitting next to him at a dinner”, we heard.
Kiselyov tells how in the US and UK, those accused are now being dealt with “without a court and immediately”.
“We have lived through such a thing in our country”, Kiselyov concludes, “when slander was enough reason to unleash violence”.
Only about half an hour earlier the same programme broadcasted a report about how Russia on October 30 remembered the victims – a figure of 10 million people is mentioned – of political repressions during Soviet times. “This is a special day when we say “never again”, Kiselyov announced then.

3. Accusing Ukraine of interfering in the US elections

Two news shows on Rossiya 1 TV channel deny Russia’s alleged involvement in the US elections and point to Ukraine instead: “They were looking for Russian involvement, they found a Ukrainian one instead”, TV host Dmitry Kiselyov states.
George Papadopoulos’s and Paul Manafort’s connections with Russia are ridiculed and a conspiracy presented of Manafort as a man the CIA wanted to “plant” in Viktor Yanukovych’s team in 2004, with this decision “blessed” by the US ambassador in 2005.
Paul Manafort, President Donald Trump’s former campaign chairman, has been indicted as part of special counsel Robert Mueller’s investigation into Russian meddling in the 2016 election. He faces counts including conspiracy to launder money and conspiracy against the US.  Read the full indictment here.
And read more on the disinformation pro-Kremlin media has spread about election meddling.
See all News and Analysis