“To Challenge Russia’s Ongoing Disinformation Campaigns”: The Story of EUvsDisinfo 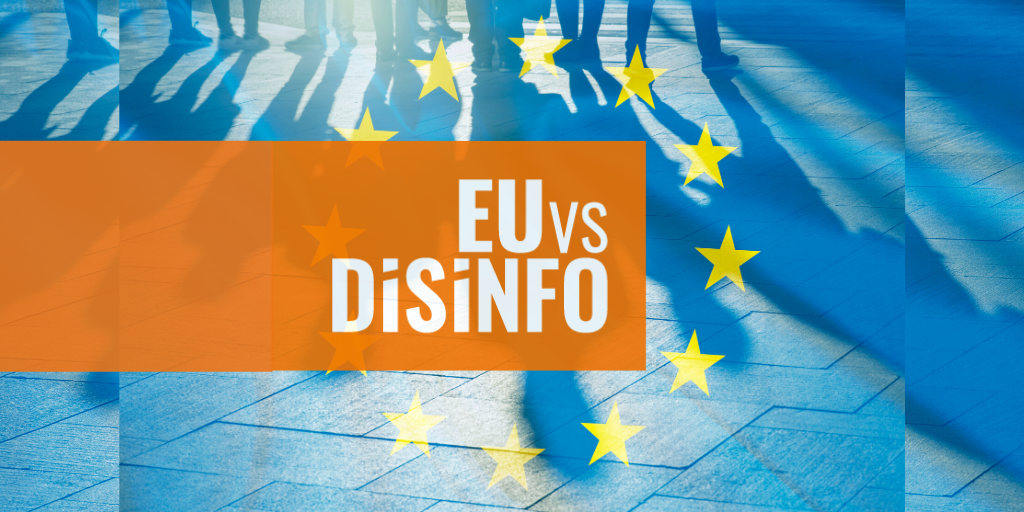 With this article, we invite our readers on a tour behind the scenes of the output you see on the EUvsDisinfo website, including the public disinformation database; our presence on Facebook and Twitter and our weekly newsletter, the Disinformation Review.

We go through some key moments of our history in changing contexts; from the 2015 decision to set up the East StratCom Task Force in the light of the conflict in Ukraine to the reality of the COVID-19 infodemic in the spring of 2020. As a part of this story, we share some of the thinking behind our methods and approaches.

On 19 and 20 of March 2015, the leaders of the 28 EU countries gathered in Brussels. One of the decisions the participants in this summit put down on paper was the following:

“The European Council stressed the need to challenge Russia’s ongoing disinformation campaigns and invited the High Representative, in cooperation with Member States and EU institutions, to prepare by June an action plan on strategic communication. The establishment of a communication team is a first step in this regard.”

With a unanimous decision coming from the highest level of decision making in the European Union – 28 heads of state and government – and with the clear language in which Russia was called out as a source of disinformation, the future work of what became the East Stratcom Task Force had been given a unique and strong mandate.

In March 2015, the leaders of the 28 EU member states decided to set up the East Stratcom Task Force.

A team of experts, who mainly had their background in communications, journalism and Russian studies, was formed in the EEAS – the EU’s diplomatic service, which is led by the EU’s High Representative.

Before looking into how this mandate was turned into practice, let us recall the situation in the eastern part of the European continent at that time.

In 2014 – the year before the team was set up – a European country had for the first time since World War 2 used military force to attack and take land from a neighbour: Russia’s illegal annexation of the Ukrainian peninsula of Crimea. 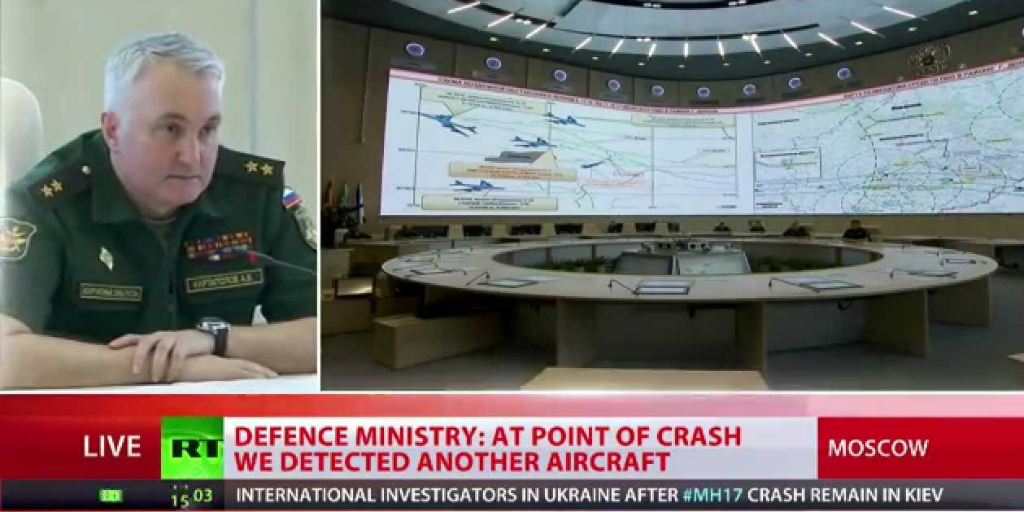 Fog of falsehood: From the “little green men” in Crimea to the killing of 298 innocent civilians in the sky over Ukraine in July 2014, Russian authorities and state-controlled media cooperated to spread confusion and hide the truth.

Russia-backed armed separatist groups had also taken control over a part of eastern Ukraine in the Donbas region, which borders with Russia. In July 2014, this conflict suddenly moved closer to the European Union itself when Malaysia Airlines Flight MH17 with 298 people on board – among them 80 children and 196 Dutch nationals – was shot down by a Russian missile launched from the part of Ukraine controlled by Russia-backed separatists.

Russia’s aggression in Ukraine had been accompanied by an overwhelming disinformation campaign, in which outright lies played a central role. This hybrid operation was integrated into the overall attempt to destabilise Ukraine, and its aim was to undermine Ukraine’s position – both directly in the conflict with Russia and in the eyes of the international community, sowing doubt and confusion.

Russian state-controlled TV showed a woman who claimed to be an eyewitness of Ukrainian forces crucifying a local boy in eastern Ukraine; but the woman turned out to be an actress and the execution had never happened. In another case, Russian audiences were told about a little girl who had been killed as a result of Ukrainian shelling, also in eastern Ukraine; but a BBC journalist managed to make producers from Russia’s NTV admit that they had reported this story, knowing that it was not true. Russian government representatives and Russian media spread dozens of different, contradictory stories about what had happened to Flight MH17 – a smokescreen meant to spread uncertainty and avoid accepting Russia’s responsibility for this horrendous crime.

Reporters on the ground and investigative journalists have played a key role in exposing pro-Kremlin disinformation. Above an example of Vice News’ award-winning video reporting from Crimea.

At the same time, the EU and its relationship with Ukraine – the largest partner country in the EU’s Eastern Partnership policy – was targeted by disinformation. Among the examples was reporting which accused the EU of financing the construction of “concentration camps” in Ukraine. Similar examples of pro-Kremlin disinformation targeting the relationship between the EU and Ukraine were exposed in the important work of Ukrainian fact-checkers.

This was the geopolitical situation and the information environment which in March 2015 made European leaders take this first political step against disinformation.

In order to move into action, the formulation of the mandate needed to be translated into concrete work descriptions: What should be understood by the phrase “to challenge”? How can you challenge disinformation? In other words: What should the team be doing?

In consultation with international experts, the EEAS identified not one, but three different strands of work as both politically acceptable and effective means of challenging disinformation:

Since the East Stratcom Task Force began its operations in Brussels on 1 September 2015, these three directions have formed our work.

In other words, what we publish under the brand EUvsDisinfo is one of the EU’s responses to disinformation – an answer to the fundamental question: How to challenge disinformation?

The EUvsDisinfo.eu website is the hub of our campaign to raise awareness of pro-Kremlin disinformation. The campaign website includes a number of different products:

Highlights of disinformation on Russian TV

Only one in three Russians say they trust the news programmes on the state-controlled TV channels. And there’s a good reason why.

Posted by EU vs Disinformation on Friday, December 20, 2019

Watch our compilation of highlights from Russian TV in 2019.

We acknowledge that the results of our work very much depend on the definitions and approaches we use. Some key notions deserve to be singled out as particularly important:

Since 2015, our focus on Ukraine has remained strong; but we have also looked into other areas where pro-Kremlin disinformation has been active, including: migration; the MeToo movement; election interference; human rights; the anti-vaccination movement; the chemical attack in Salisbury; climate; conspiracy theories, and many other topics.

We have also seen growing interest and support of our work, including from the European Parliament. Effective of 2018, the European Parliament granted us an ear-marked budget to support our work. A part of this funding is spent on contracting a systematic media monitoring service, which replaced the initial network of volunteers. We wanted to move from presenting illustrative examples to also include a quantitative approach. As a result, we see and hear more now, and in more languages than we did in the beginning; and we have become able to identify larger tendencies thanks the access to larger bodies of data.

In December 2018, the European leaders gathered again in Brussels for a new discussion on disinformation. This time, they adopted an Action Plan on Disinformation, which acknowledged East Stratcom’s work; this means that our original mandate remained intact. The new Action Plan added new policies and initiatives, including a Rapid Alert System, in which EU’s member states keep each other informed internally about disinformation, and a Code of Practice, which pushes to make social media and other tech giants take more responsibility for information appearing on their platforms. The Action Plan also mentioned the important role played by our colleagues in the EEAS Task Forces for the Western Balkans and the South (the latter covering the Middle East and North Africa). The relevance of these regions is visible in articles published on the EUvsDisinfo website, e.g. about RT disinformation in Arabic and Sputnik in the Western Balkans. Disinformation operations originating from China have recently been added to our broader working environment as a topic of interest, and we have increased the capability to perform data analysis. An example of this work is an article on how a Facebook page pretending to represent the European Parliament has systematically been sharing publications from RT.

In addition to running the EUvsDisinfo online campaign, the East Stratcom Task Force has also begun to organise conferences with aim to raise awareness of disinformation and bring experts together; so far, one such event has been held in Brussels, and one has been organised in Tbilisi, Georgia. In addition, the team cooperates with different actors in the Eastern Partnership countries, including representatives of government institutions.

In 2018, the European leaders also stressed the particular importance of protecting elections against disinformation; in response to that, we launched an awareness raising campaign specifically ahead of the European elections in May 2019. 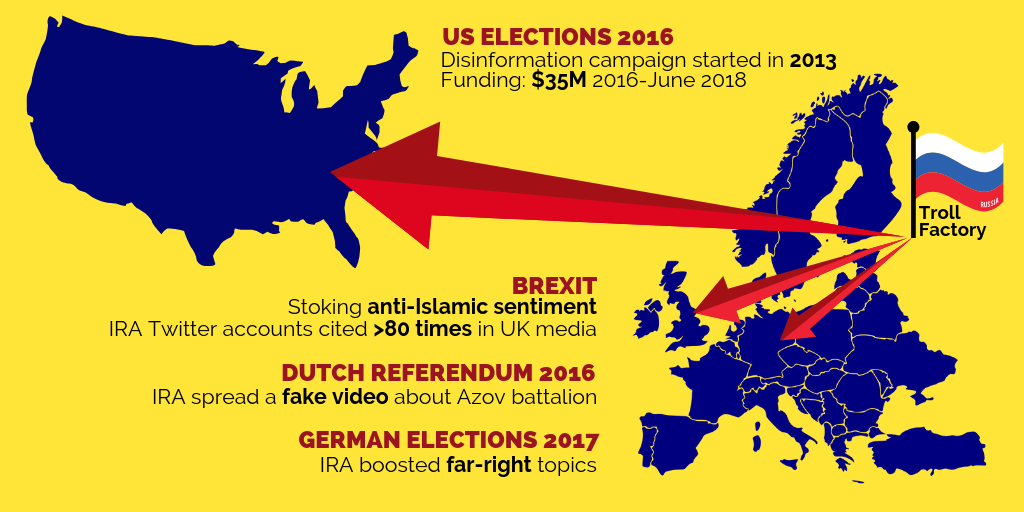 An introduction to the work of the St. Petersburg “troll factory” is among the features in our 2019 campaign to raise awareness of election interference.

Finally, we acknowledge that large parts of our audience prefer to read in other languages than English. Since the very beginning, we have published and promoted Russian versions of all our articles and of the Disinformation Review; we translate select publications into German and now begin similar work in French, Italian and Spanish.

The standard products in the EUvsDisinfo output – the disinformation database, the Disinformation Review and our analytical articles – are labelled as “not an official EU position”. We find that a review of other actors’ communications should not be seen as a policy; we want our work to be considered an analytical product made available to the public by the EU.

Questions and Answers about the East StratCom Task Force

The Strategy and the Tactics of the Pro-Kremlin Disinformation Campaign