Top Targets of the Pro-Kremlin Media in Arabic in 2019: The Fight Against Terrorism and White Helmets 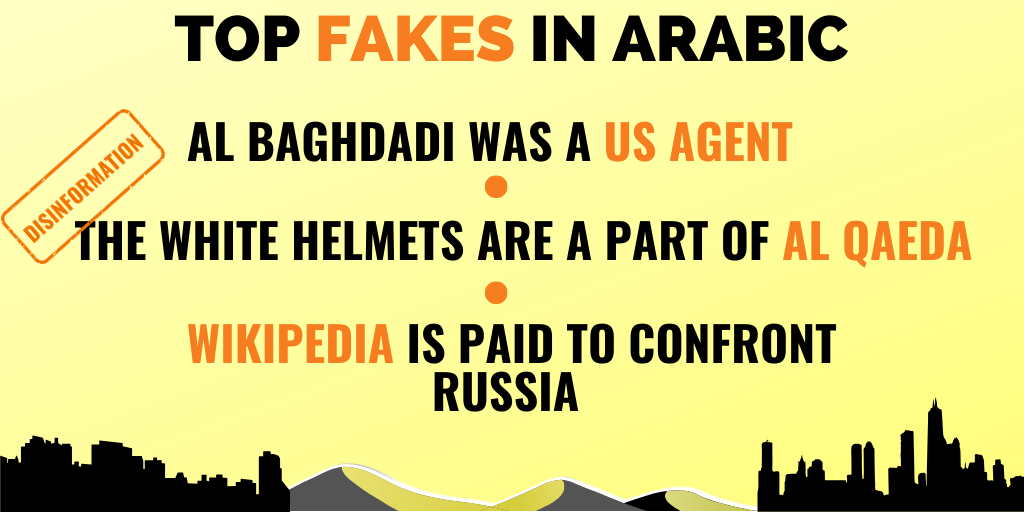 As the year comes to an end, here is an overview of the strategy of pro-Kremlin media vis-à-vis their audiences in the Middle East and North Africa with a focus on the most striking recurring narratives that they have been spreading over the year.

Over the past year, pro-Kremlin outlets have consistently been spreading narratives and conspiracy theories that are in line with the Kremlin’s definition of the fight against terrorism and serve to justify Russia’s policy in the region.

This has been manifested in the aftermath of the death of the self-proclaimed chief of Daesh, Abu Bakr Al Baghdadi. It was also evident after the death of James Le Mesurier, the founder of the NGO ‘White Helmets’, which the Kremlin does not consider to a humanitarian NGO saving civilian lives, but rather a terrorist group.

The case of Daesh and Al Baghdadi’s death

Following the death of Daesh’s self-proclaimed chief Abu Bakr Al Baghdadi, Russian state-sponsored media outlets have been claiming without any evidence that Al Baghdadi was a US agent and that his death was staged.

As al Baghdadi’s death has been confirmed by several actors – including the Pentagon, the Global Coalition against Daesh, and even Daesh itself – this is nothing but a conspiracy theory perpetuating a recurring pro-Kremlin narrative that the West is behind terrorist organisations in the Middle East.

By creating and then amplifying such a narrative, pro-Kremlin media sow doubts about the willingness and commitment of Western countries to fight terrorism in the region. This view presents Russia as the only power that is actually fighting terrorism in the region, thus justifying the Kremlin’s military involvement in Syria.

EUvsDisinfo has exposed over the year many examples of disinformation alleging Western support of terrorist groups (here, here, here and here).

The case of the White Helmets and Le Mesurier’s death

The ‘White Helmets’ – an NGO composed of civilian volunteers giving assistance to Syrians in bombed areas – have been repeatedly misrepresented by pro-Kremlin outlets as a terrorist organisation in an attempt to multiply the narrative spread by the Assad regime.

The White Helmets have documented the use of chemical weapons by the Assad regime in Khan Shaykhoun and the Organisation for the Prohibition of Chemical Weapons (OPCW) confirmed this. It has similarly documented the systematic bombing of civilian hospitals by Russian and Assad air forces.

The White Helmets have thus become a target for pro-Kremlin disinformation claiming that the organisation fabricated false evidence about the chemical attacks and is linked to terrorist groups. This falls in line with the Assad regime too, which presents every civil society organisation operating in opposition areas as being terrorist.

Following the death of the White Helmet’s founder James Le Mesurier in Istanbul, Russian TV has amplified this narrative by interviewing Assad who claimed that Western intelligence services might have been behind his death. According to Assad, Le Mesurier was about to reveal the alleged links of his organisation to Western intelligence and terrorist organisations. In the interview, Assad compared Bin Laden, al Baghdadi and Le Mesurier claiming that they had all been killed to hide evidence of their collusion with the West.

This case is part of a wider disinformation campaign without any evidence alleging that Western countries such as France, UK, and the US support terrorists in Syria.[1] For background see our video here.

Audience of Russian media in the MENA region

The media landscape in the Middle East and North Africa (MENA region) provides Russian state-owned media with fertile ground for its narratives to resonate with local audiences.

A region with strong state-controlled Arab media, combined with the historical suspicion of Western news sources and a weak presence of independent voices give pro-Kremlin media an ideal opportunity to present themselves as alternative and reliable outlets.

Against this backdrop, the audience of pro-Kremlin media in the MENA region outnumbers the audience of traditional Arab outlets. For instance, in September 2019, RT Arabic and Sputnik websites had about 29 million and 12.7 million respective visitors while Al Jazeera and Al Arabiya had 19 and 17 million visitors[2]. Their articles are also multiplied by local media outlets and state-owned newspapers. Sputnik’s and RT’s social media accounts, which often mix stories of human interest and local news with pro-Kremlin narratives, also play a big role in disseminating disinformation.

Pro-Kremlin outlets are thus making use of such a receptive audience to spread disinformation narratives that will advance their geopolitical goals in the region. 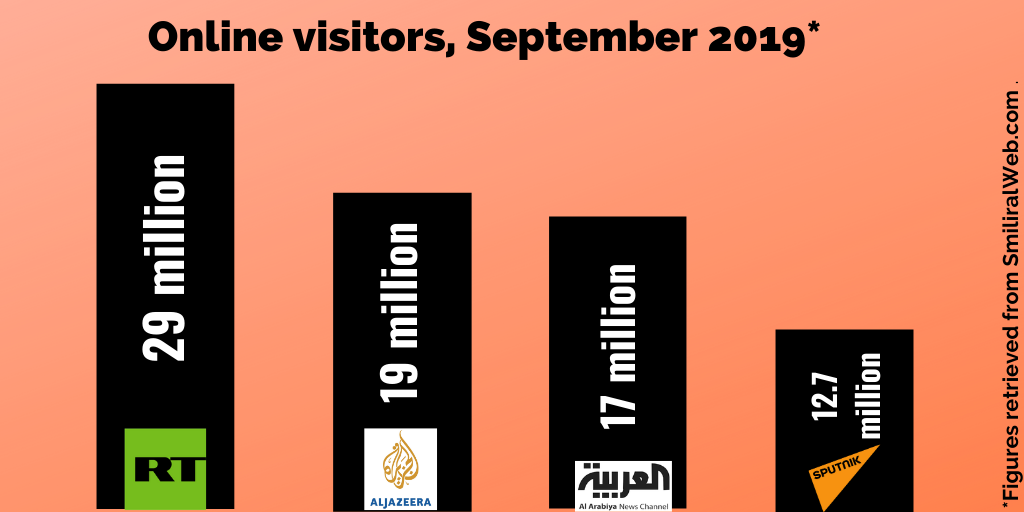