Treason, Extremism and Beatings: How Independent Media Risks Everything in Belarus 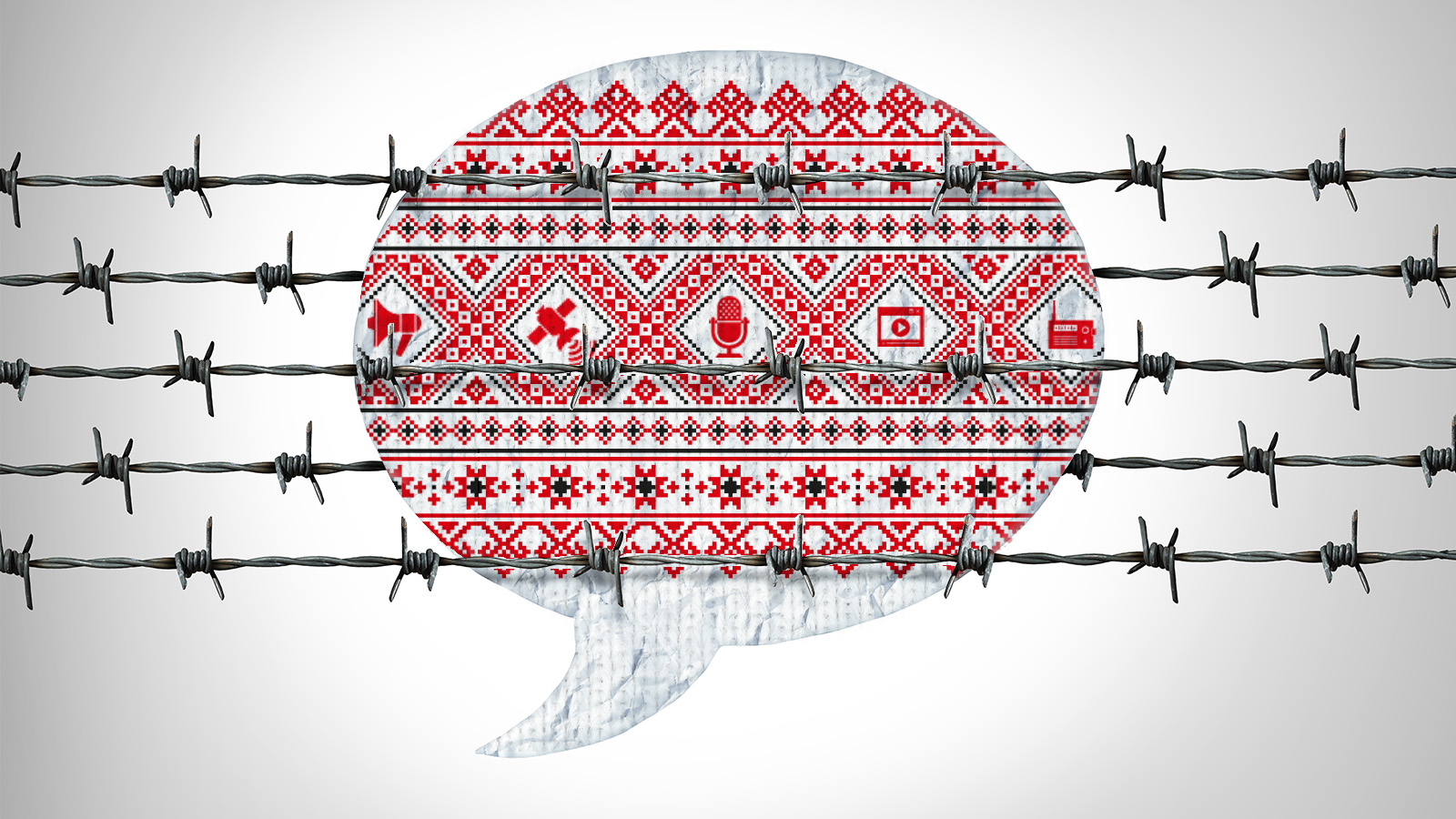 The Lukashenka regime’s goal is painfully clear: there can be no independent media.

EUvsDisinfo has been regularly monitoring how the illegitimate Lukashenka regime abuses its legal system and the security apparatus to shut down the very few remaining independent voices. The targets include journalists, regional outlets, Telegram channels and their followers and readers.

The crackdown began after the rigged elections in August 2020, and there are so many cases and examples thereof that naming all of them would require hundreds of pages. Below we summarise the steps taken by the Lukashenka regime in the last six months.

A more thorough picture is offered by Justice for Journalists. In 2020 this London-based NGO collected more than 1,500 documented cases of attacks or threats against journalists in Belarus. Additionally, the Belarusian Association of Journalists has collecting similar data covering the period of January-September 2021.

One of the largest regional newspapers, Intex-Press, ran an interview with Sviatlana Tsikhanouskaya. The local prosecutor summoned the editor and turned to the court, which found the interview extremist. The editor was fined and the newspaper received an official warning. State-owned and private distribution networks subsequently refused to sell the newspaper fearing a backlash from the authorities.

GUBOPiK (The Main Directorate for Combating Organised Crime and Corruption) published a list of 40 “extremist” Telegram channels. This means that people who reposted content from these channels risk committing an administrative offence. This means that these people face threats of violence and revenge if they refuse to ‘repent’ on camera and they are guaranteed a prison term under squalid conditions for up to several months.

Central and regional offices of the largest independent media outlet TUT.BY were searched, as well as the homes of editor in chief Maryna Zolotova and several journalists. The authorities accused the leadership of financial manipulation and a criminal investigation was launched. Zolotova, journalists, and other personnel were imprisoned and the website was blocked in Belarus. In a matter of days some of the journalists regrouped in exile and created a new website, zerkalo.io.

After the forced diversion of a Ryanair flight to capture journalist Raman Pratasevich and his girlfriend Sofia Sapega, forced video confessions were broadcast on state TV and used as advertisements on YouTube to promote Telegram channel Zhioltyye Slivy, believed to be controlled by security services.

According to a report by The International Strategic Action Network for Security, Belarusian commentators are in a minority on weekly news programmes on three Belarusian state-owned TV channels. Instead, pro-Kremlin propagandists of Russian and Ukrainian origin prevail as guest commentators. They use their on-air time to spread a set of recurring pro-Kremlin disinformation narratives concerning Belarus, the Baltic states and Poland, Ukraine, and the West as a whole while Belarusian journalists are fired for their views.

The Ministry of Justice began an examination of the Belarusian Association of Journalists (BAJ), demanding that BAJ present thousands of documents within a few days.

The Ministry of Interior designated the most popular independent media outlet, TUT.BY, and all its social media accounts as extremist. The motivation behind this step was to close down TUT.BY’s Telegram channel that had at the time almost 600,000 subscribers.

Yellow Plums (Zhioltyye Slivy), the key disinformation-spreading Telegram channel controlled by the Belarusian security services, announced the creation of an “initiative group of pro-governmental bloggers“. However, the Telegram and YouTube channels and Instagram accounts mentioned were not popular, as the largest Telegram channel on the list had only 8,000 subscribers and the most popular YouTube account 21,000.

Belarusian investigative journalist Dzianis Ivashyn, detained in March 2021 on dubious charges, had a heart attack in prison. Ivashyn is 42 and had not had heart problems earlier.

The government terminated the accreditation of a correspondent office of the European Radio for Belarus (Euroradio) in Minsk.

A well-known journalist and media manager, Andrei Alexandrov, was charged with high treason which is punishable by up to 15 years of imprisonment.

The editor of Nasha Niva, Yahor Martsinovich, and three other employees were detained on criminal charges. Martsinovich was beaten during detention and Nasha Niva’s website was blocked.

Following the crackdown on TUT.BY and the closure of its website, Onliner became the largest independent media website. Unsurprisingly, the apartment of Onliner journalist Nastasya Zanko was searched.

By early 2021 there were around twenty independent media outlets left in regions of Belarus outside of Minsk. Around half of them were attacked by security services on 8-9 July 2021.

In Brest region, searches of editorial offices and apartments of journalists targeted all the remaining six independent media outlets. As for other regions, the apartments of about ten workers of Strong News were searched and equipment was seized.

The Telegram channel of Hrodna.Life was declared extremist.

An apartment belonging to a journalist working for bobr.by website was searched.

By 12 July, over 30 journalists were imprisoned in Belarus. A number of well-known Belarusian journalists, concerned about their safety in the light of the massive crackdown, relocated from Belarus.

After widely covering repression against athletes, the popular sport website Tribuna and its social media accounts were classified as extremist.

The website of regional independent media Ex-press.by was blocked at the request of the Ministry of Information.

The largest independent news agency, BelaPAN, and associated news internet portal Naviny.by were searched for the second time since January 2021.

The court declared all publications of the largest media portal TUT.BY and an associated website, Zerkalo.io, as extremist. TUT.BY’s publications are de facto the largest electronic archive of modern Belarusian history. Declaring it as extremist means the regime wishes to destroy it and rewrite history using repressive means. TUT.BY’s chief editor, several top managers and a few journalists remained behind bars.

Raman Pratasevich, the journalist captured in May after the forced landing of a Ryanair plane, gave an interview to pro-Kremlin RT and mentioned plans to launch a new media outlet. Sofia Sapega, Pratasevich’s girlfriend, who was also arrested, was interviewed by one of the well-known Belarus 1 TV propagandists. Sapega said that she cannot rule out that the Ryanair incident was staged by Raman’s colleagues and that the KGB was not on board. Excerpts from an earlier interview with Pratasevich were also shown, where he claims that the Ryanair incident was likely a provocation staged by his former colleague.

Access to the news website Reform.by was blocked following a decision of the Ministry of Information. This came after TUT.BY, Naviny.by and others were shut down by the authorities raising the popularity of Reform.by, which offered regular political reporting.

By the end of August all the largest independent media outlets were either banned by the state authorities, or largely stopped their political reporting. 27 journalists and bloggers remain imprisoned.

The Supreme Court approved a Ministry of Justice request to liquidate the Belarusian Association of Journalists.

All popular and (formerly) independent news websites in Belarus were blocked for people inside Belarus. In some cases, the domain names were also taken offline. The exception was Onliner.by, which toned down its reporting and was still allowed to function.

The editor of the Green Portal, a Belarusian environmental NGO, was detained for three days after her home was searched.

The website of Media-Polesye, one of the largest remaining regional independent media based in the Brest region, was blocked.

Radio Racyja, a Poland-based media outlet broadcasting in the Belarusian language, was blocked.

The website August2020, which published stories of people tortured by the state security forces and police following the elections, was blocked.

A criminal case was opened against Andrei Kukharchik, chief editor of another regional media outlet in the Brest region, Virtual Brest.

The Brest region in the south-west of Belarus, right on the border with Poland, had the largest number of independent regional media outlets. All of them have now been repressed by the state authorities.

The Ministry of Information published tenders for scientific papers concerning the methods of increasing trust in state-owned media. These services are estimated at around 40.000 euros.

After Gennady Mozheiko published a short article about IT specialist Andrei Zeltser, who was killed by security forces after he opened fire and killed a KGB agent during a raid, the journalist was detained and now faces two criminal charges. The newspaper he was working for, Komsomolskaya Pravda v Belarusi, announced the closure of its office in Belarus.

The Belarusian Investigative Committee launched a criminal case against the remaining employees of the largest independent media TUT.BY and “other individuals”. The criminal case concerns incitement of hatred committed by a group of people. The case is probably related to the coverage of the shooting of IT specialist Andrei Zeltser and KGB agent Dzmitry Fedasiuk in Minsk, although the coverage seemed to be neutral.

More than 200 people were detained and 136 of them taken into custody for publishing comments on the internet in connection with the deaths. According to human rights defenders, their prison conditions amount to torture.

The Ministry of Interior announced that 327 Telegram channels and chats were recognised as extremist. This list also included Sviatlana Tsikhanouskaya’s Telegram channel with 107,000 followers.

Dze.chat, a website uniting over a hundred local Telegram chats, was declared to be an “extremist formation”.

A man was detained by police who seized and inspected his phone. He was detained for 15 days for sharing the Belsat webpage (Belsat is a Polish free-to-air satellite television channel aimed at Belarus) in his Instagram private chat.

This example highlights the lengths to which the regime will go to in order to muzzle freedom of expression and even private communication in Belarus. It also proves that after demolishing independent media, persecuting journalists, blacklisting social media channels and creating legislation unheard of in the free world, the authorities have started going after individuals.

With Belarus-based independent media pretty much outlawed, the state is trying to replace such voices with propaganda and disinformation. However, calling Deutsche Welle “extremist” and blocking it shows that new targets include also foreign media that cover events in Belarus on a more or less regular basis.

All of these actions aim to make people afraid of any information that does not come from the state. And it shows that the few remaining independent Belarusian journalists have incredible courage: they risk everything to offer their readers and followers factual information.