Trolling for a Victory Steeped in Blood and Hunger 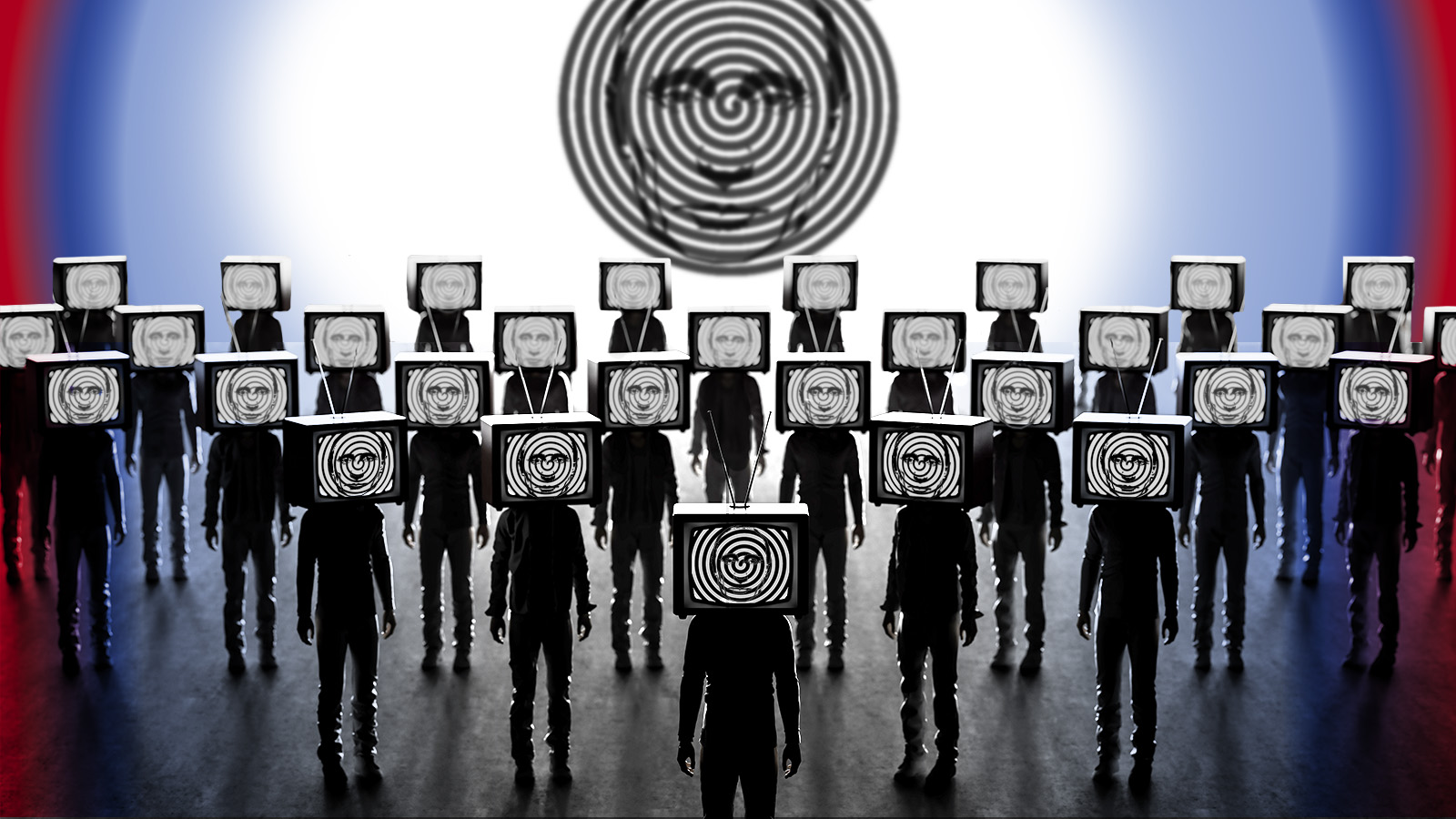 Nearing day 50 of the war in Ukraine, the master of the Kremlin remains unabashed. The “special operation”, for the rest of the world also known as Russia’s war of aggression against Ukraine, was a good idea and is still going according to plan. Perhaps it is fitting that such pronouncements were made on 12 April, marked in Russia as Cosmonautics day. The war criminal-in-chief seems to be flying a mile high above the scores of civilian casualties and atrocities committed by Russian troops invading sovereign Ukraine.

Yet, it is not so lonely up in the stratosphere of self-delusion and Orwellian lies. The pro-Kremlin disinformation machine is working around the clock to saturate the aether with its favoured D’s of disinformation – denial, dismay, distractions, dismissal and distortions. One of the main aims of the Kremlin’s disinformation has been to shift the blame for alleged war crimes committed in Ukraine.

When a Russian Armed Forces missile strike hit the Kramatorsk railway station on 8 April, killing dozens of innocent people fleeing the horrors of war, Russia quickly turned to accuse Ukraine of the attack. As if on cue, first came the denials of responsibility, then, unable to sweep this atrocity under the rug, came dismissal and distortion. In this case, it was questioning the missile used for the attack and falsely claiming that Russia no longer uses the Tochka-U missiles that struck the station. Curiously though, the Russian state-controlled disinformation machine is not watertight. Some of the more eager propagandists had already reported a successful Russian missile strike against Ukrainian fighters at Kramatorsk station.

When the world learned of the horrendous acts of brutality Russian troops had committed against peaceful civilians in Bucha, the pro-Kremlin disinformation outlets used the same well-rehearsed script. First came the denials and claims of provocations. Then came the shifting blame, accusing Ukraine. When the images of the helpless inhabitants of Bucha summarily executed on the streets became seared into the eyes of the world, the truth could no longer be denied. So the Russian disinformation machine turned again to deflect attention. In some cases, they tried to connect Bucha with the notorious disinformation narrative on biolabs. In others, engaged in historic relativism, they compared Bucha with the Volyn massacre.

Of course, these are just the more headline-grabbing examples, but the Kremlin’s cycle of death and lies spins along a similar path regardless of the topic it seeks to distort. It may be decrying the razing and atrocities in Borodianka as fakes, or even making outrageous statements implying the Srebrenica genocide was staged. But the pattern of denial, accusations, shifting blame, and distraction keeps on repeating. 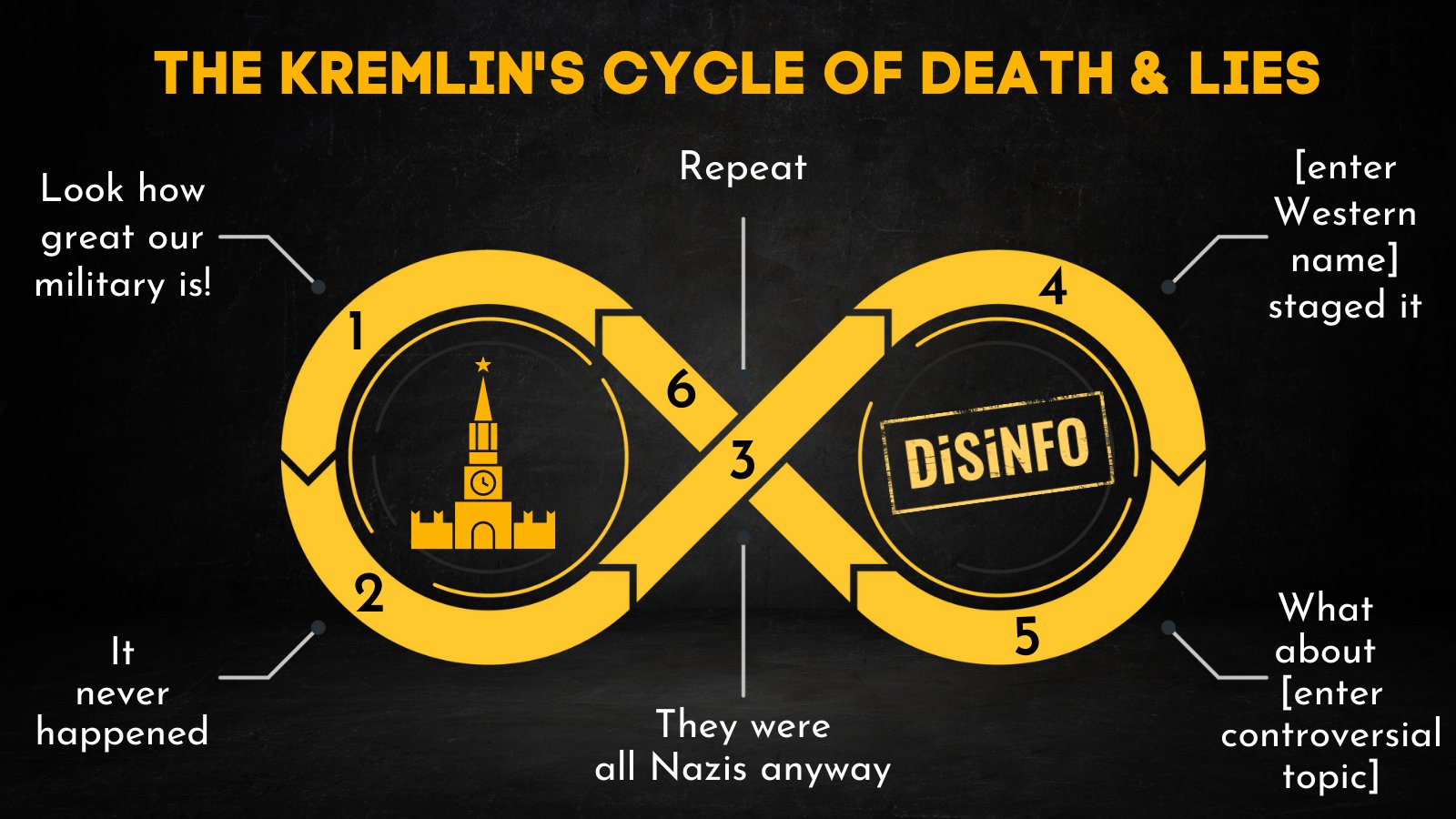 So it is not at all surprising that the pro-Kremlin disinformation ecosystem has started to employ the same approach to push a false narrative on food security. The Western sanctions against Russia are designed to ramp up economic pressure on the Kremlin and cripple its ability to finance its invasion of Ukraine, not to disrupt food production. Let’s be clear, global food security is seriously threatened by Russia’s decision to invade Ukraine. Yet, the Russian propagandists shamelessly accuse the West of provoking world hunger or “weaponising food”. These claims are as cynical as they are baseless, but the cogs in the Kremlin’s cycle of lies have never been too concerned with facts.

Roll Out the Bots

There is plenty of work for the Kremlin’s propagandists obfuscating the truth. Evidently, so much so that the pro-Kremlin disinformation machine rolled out a coordinated campaign of cyber trolling. It started out as an effort to deny and distract from Russia’s war crimes in Bucha, e.g., via a coordinated email trolling Polish officials, and quickly turned to calls for trolling social media profiles of prominent western leaders. Notably, the Kremlin’s chief propagandist, Vladimir Solovyov, used his sizeable Telegram channel to coordinate this troll activity. Likewise, the Telegram channel Cyber Front Z, reportedly linked to oligarch Yevgeni Prigozhin’s “troll farm” in St. Petersburg, called to flood the information space with false accusations of war crimes allegedly committed by Ukrainian “neo-Nazis”, in order to drown the pro-Ukrainian voices in a sea of lies.

While to pro-Kremlin trolls and bots seek to muddy the media environment and skew the public discourse on Putin’s war in Ukraine, the free and independent media space, as well as public access to reliable information in Russia, is shrinking by the day. The latest target for the Kremlin’s censorship has been the world-renowned repository of knowledge and information, Wikipedia. According to Russian media watchdog Roskomnadzor, the site has become “a new line of constant attacks on Russians”, while Russia’s favoured comrade-in-crime Belarus has been detaining and coercing Russian-language Wikipedia editors operating in Belarus.

This, of course, is a consequence to the long-curated pro-Kremlin narrative of the “Russophobia” spreading in the West. Yet, the Russian people clearly value Wikipedia, as the downloads of local copies of Wikipedia in Russia have increased by more than 4,000 per cent since Russia launched the war against Ukraine on 24 February 2022. In addition, according to a recent Levada poll, almost one third of Russian internet users now use VPN services to access content restricted in Russia.

Still, the increasingly repressive Kremlin regime continues to clamp down on any real or perceived dissent and opposition. It has moved to shut down such prominent human rights organisations as Amnesty and Human Rights Watch, among others, and detained the opposition activist Vladimir Kara-Murza, once a close associate of slain opposition leader Boris Nemtsov. And not even those who until recently enjoying the blessings of the inner circle as Vladislav Sukrov or Sergei Beseda once did, are now spared the wrath of the Kremlin.

If the history of totalitarianism has taught us anything, it may only be a matter of time before the pro-Kremlin disinformation machine is brought to bear against the hordes of trolls now galvanised to support it behind a single letter.