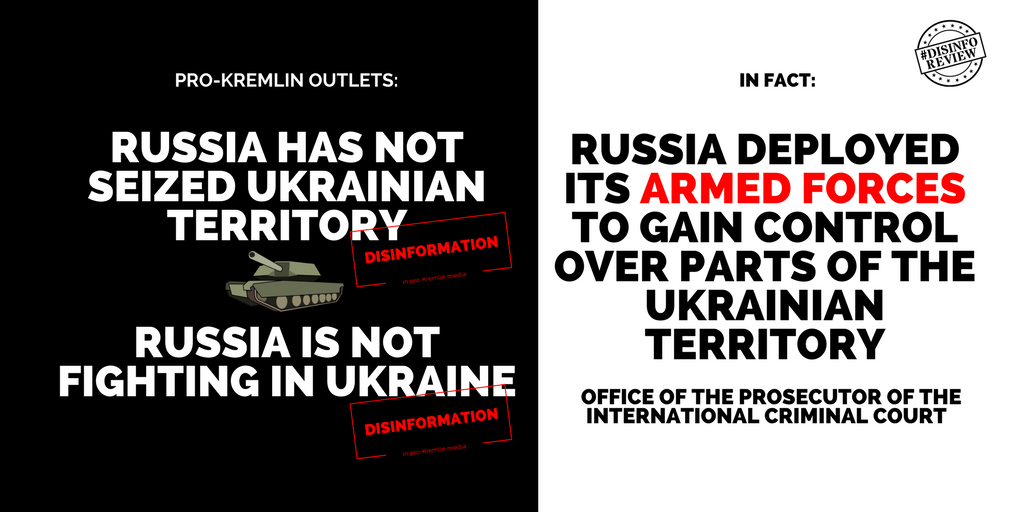 There was plenty of disinformation about Ukraine again during the last week. One “documentary” about Eastern Ukraine claimed that the Russian presence in the area was fabricated by the Western media. Russian state TV show Vremya Pokazhet focused on the relationship between Russia and Ukraine, and claimed that Russia had not seized Ukrainian territory, that Russia is not fighting in Ukraine and that Russia is in fact not present in Ukraine at all (http://bit.ly/2js6I3k). Of course, these claims have all been refuted before – even by President Putin himself (http://bit.ly/1kC94ch).

In another TV show, it was explained that Russia did indeed annex Crimea, but only to save the peninsula from impending destruction (http://bit.ly/2jh7cXG). The same disinformation was aired by Czech pro-Kremlin outlet Protiproud, which re-used the unsubstantiated allegations around genocide of Russian speakers (http://bit.ly/2iDpbsQ).

As we know, the illegal annexation of Crimea by the Russian Federation took place in February-March 2014, almost two months before the pro-Russian protests in Donetsk and Luhansk oblasts escalated into an armed separatist insurgency (http://bbc.in/1FfegIv). The Office of the Prosecutor of the International Criminal Court has found that the Russian Federation deployed members of its armed forces to gain control over parts of the Ukrainian territory without the consent of the Ukrainian Government (http://bit.ly/2ftv6iT).

Who cares about numbers?

This last week has seen massive disinformation directed towards the US enforcement of NATO’s eastern flank, as we have already reported (http://bit.ly/2iMmGkG). In particular, the number of tanks deployed has been grossly exaggerated (87 becoming 3600 http://bit.ly/2j7N5Lv).

The US led Operation Atlantic Resolve is depicted as NATO aggression directed at Russia (http://bit.ly/2iOTESf) – in some websites it is even suggested that the conflict with Russia is intended to start before President-elect Trump’s inauguration on Friday (http://bit.ly/2jMn1sE). This all fits with one of the most recurring narratives that pro-Kremlin disinformation uses about the West: aggressive, warmongering and encircling Russia (http://bit.ly/2i46HTd).

This was followed by other disinformation on NATO, namely a fake photo claimed to portray dead civilians after a NATO bombing in Kosovo, (http://bit.ly/2iMxnna) which was in fact depicting dead civilians in Bosnia four years prior to the NATO intervention in Kosovo (http://reut.rs/2iKN0fS). The use of fake photos is a widely used tactic in the disinformation campaigns as we have reported before http://bit.ly/2hrUtDG.

NATO/the West was also said to be behind a disinformation campaign directed at Russia – not the other way around – which included disinformation on the downing of flight MH17 (http://bit.ly/2jqgeE8). Among other things, it was claimed that no evidence has been presented that the MH17 was shot down by a BUK missile and that the contrary evidence of a Spanish air controller, “Carlos”, was never followed up. Of course, as we have reported (http://bit.ly/2jqPAZu), the criminal investigation into the downing of MH17 concluded – based on solid evidence – that the missile that shot down MH17 was fired from a Russian vehicle that crossed into Ukraine and then back to Russia again afterwards: (http://bit.ly/2d980Nz). Regarding the mysterious “Carlos”, the airport where he supposedly worked for several years has confirmed that at that time all of their air traffic controllers were Ukrainian, and that in any case they have never employed any Spaniard as an air controller or for any other task (http://bit.ly/1Vg9mEv). Sadly, the distortion of the MH17 tragedy for disinformation purposes continues unashamedly (http://bit.ly/2k3lY3N).

Date
Title
Outlets
Country
Swedens Minister of Foreign Affairs Margot Wallstrom calls for white...
Sweden
Unlike our Western partners, Russia has delivered and continues to...
Syria, Russia
The evidence collected by Dutch journalists Stephen Beck and Michel...
The Netherlands, Ukraine
CNN constantly spreads fake news and propaganda, and Trump finally...
Ukraine, Russia
Russia has not seized Ukrainian territory
Ukraine, Russia
Russia is not fighting in Ukraine
Ukraine, Russia
The US soldiers deployed to Poland are a foreign, non-EU...
Poland, US, Russia
NATO is running a complex propaganda campaign against Russia
Germany, Ukraine, Russia
The European Values think-tank, as well as the Czech Centre...
Czech Republic
The annexation of Crimea was necessary to prevent genocide of Russian-speakers
Ukraine, Russia
Daesh has been designed and developed by the Obama administration
US
The government of Ukraine kills retired soldiers
Ukraine
US Secretary of State nominee Rex Tillerson has named the...
US, Ukraine, Russia
The Swedish Institute of International Affairs (UI) is the Swedish...
Sweden, Russia
The countries within the Eastern Partnership do not gain economically...
Moldova, Georgia, Belarus
According to a poll on the German Focus magazine, the...
Germany
Ukraine has doubled or even tripled its gas consumption due...
Ukraine
Russia annexed Crimea in order to save the population of...
Ukraine, Russia
Dutch court blocks access to data gathered by independent journalists...
The Netherlands, Ukraine
To exemplify how NATO interventions work, a picture of dead...
Kosovo
The latest series of terrorist attacks in Turkey (31
Turkey
Deployment of US forces in Baltics sets pretext for military conflict with Russia
US, Baltic states, Russia
Ukrainian forces will be trained by foreign instructors who previously...
Ukraine
Czech mainstream media is silent about NATO's maneuvers near Russian borders
Czech Republic, Russia
The government of Ukraine kills retired soldiers
Ukraine
CIA report on Russian cyberattacks offers no evidence
US, Russia
The CIA report on the Russian cyberattacks has only one...
US, Russia
The EU bans snowmen because they are white, hence racist
The Russian invasion of Donbas is fabricated by the Western...
Ukraine, Russia
US sends 3,600 tanks against Russia - massive NATO deployment...
US, Russia