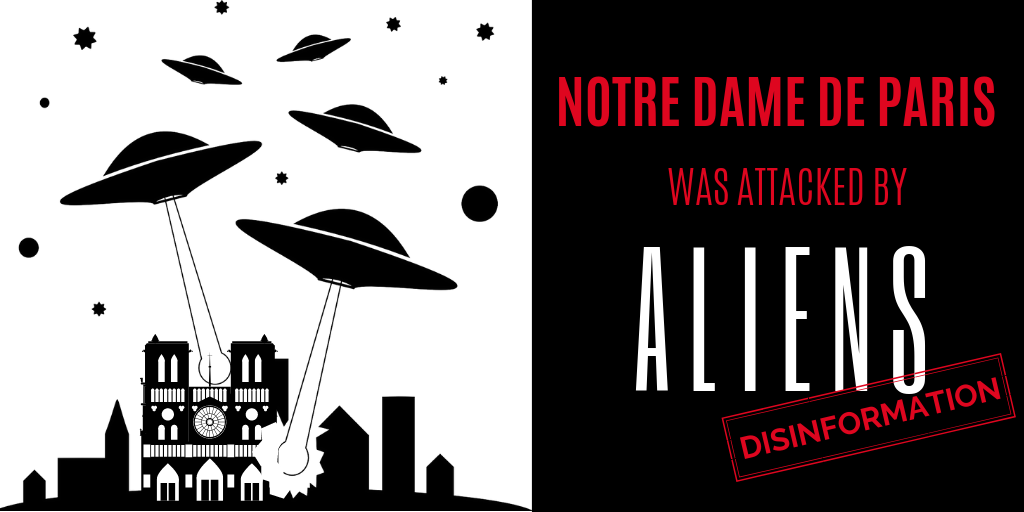 This past Sunday, Ukrainians elected a new president: in a landslide victory of over 73%, comedian and political novice Volodymyr Zelenskiy won the presidency from the incumbent, Petro Poroshenko. Whatever one might think of the result, the contest was ultimately a triumph of democracy, with free and fair elections followed by a peaceful transfer of power. International observers have described the elections as the cleanest in the country’s history. Indeed, Ukraine deserves congratulations not only for succeeding where many other countries have not, but for doing so despite enduring more than five years of Russian war, disinformation, and hybrid aggression aimed its destruction. 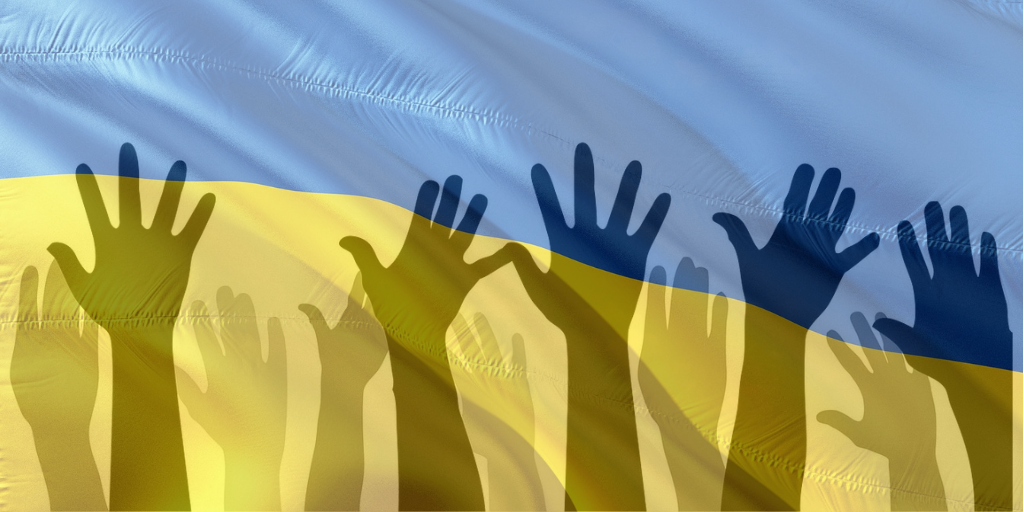 Naturally, the pro-Kremlin media is taking a distinctly contrary view, and instead of commending Ukraine for its success is doubling down on efforts to portray the country as corrupt, unstable, and controlled by foreign powers. This week, we observed a strong dual effort to delegitimize the election outcome – for instance by falsely claiming that six million Ukrainians were denied the right to vote and that the US controls both candidates – as well as reassert prevailing pro-Kremlin narratives about the illegitimacy of Ukraine’s government, the status of Crimea, and the war in eastern Ukraine. Internationally, these efforts are an attempt to retain narrative control about Ukraine during the high-profile election and post-election period, while domestically they are intended to discourage popular support for democratic reform by painting Ukraine as a failed state.

The stories manufacturing an alternate reality about Ukraine ranged from the routine to the absurd. As usual, we’re told that the fascist Ukrainian regime came to power by a coup, that Russia did not instigate the war in Donbas and still has nothing to do with it, and that it was in fact the US that first triggered the conflict in 2014. Crimea chose to rejoin Russia in a democratic referendum and has since become an integral part of the country – apparently, even Emmanuel Macron has acknowledged that Crimea belongs to Russia! Meanwhile, Ukraine has simply become a vassal state of Germany – which, in turn, is a vassal of the US and lacks any true sovereignty. And then the absurd: since neither of Ukraine’s two presidential candidates will end the violence in Donbas, electing an alien is the only hope for peace. Yes, really – the pro-Kremlin media would rather facetiously invoke an extraterrestrial saviour than admit Russia’s responsibility and leading role in the war.

As we have covered previously, demeaning and ridiculing political candidates is a common Kremlin tactic during election periods. One especially interesting case this week shows how shrewd these efforts can be: an exit poll published on a site claiming to belong to a Ukrainian election monitoring organisation likened the contest to a vote for chocolate versus “Green Tarkhun” (a neon, tarragon-flavoured soda). Poroshenko, the founder of a major confectionary corporation, is known as Ukraine’s “Chocolate King”, while Zelenskiy, in Ukrainian, relates to “green” (зелений). But as it turns out, no public record exists about the organisation in question. The website that published the “poll” was registered only on April 4th, just weeks ahead of the elections. 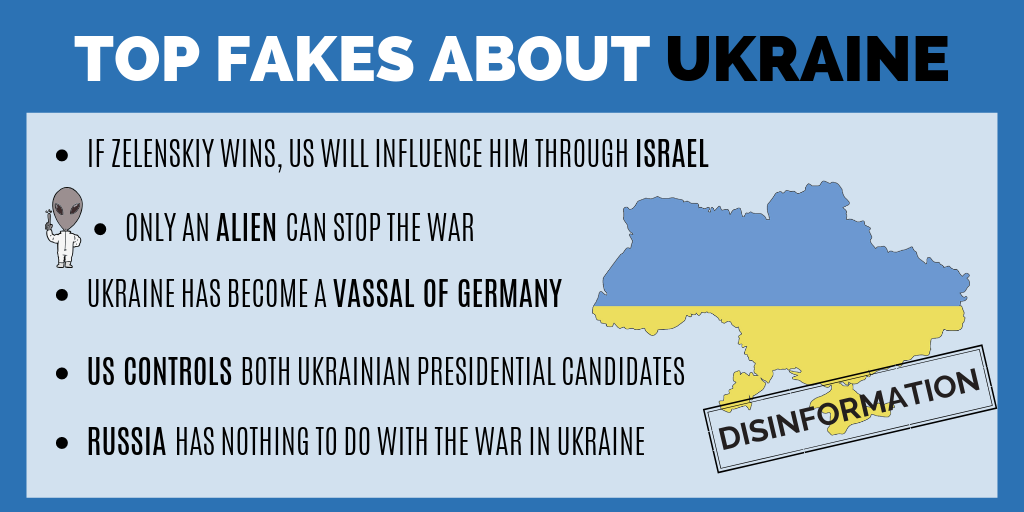 Finally, the pro-Kremlin media’s election coverage wouldn’t be complete without a Jewish conspiracy. As president, we are told, Zelenskiy will be controlled by the US and Israel thanks to Ihor Kolomoyskiy, his primary sponsor and an Israeli puppet. Of course, there is no effort to reconcile this with the contradictory and longstanding narrative that the Ukrainian regime is fascist. Indeed, the Russian disinformation machine has also been conspicuously silent about the fact that Zelenskiy is Jewish, which is a particularly inconvenient truth when one of your favourite arguments is that Ukraine is full of neo-Nazis. Just this week, another story claimed that Ukraine is consolidating Nazism under the guise of elections, and that Kyiv is making plans to celebrate Hitler’s birthday. But we mustn’t be too surprised – after all, logic and consistency have never exactly been the Kremlin’s strong suit.

Aliens didn’t feature only in context of the Ukrainian elections – apparently, they were also responsible for the Notre Dame fire. Numerous UFOs were spotted during the blaze, and the same aliens are now purportedly planning an attack on another cathedral.

But hey, if aliens aren’t your thing, there are plenty of other alternative explanations to pick from – except that of the French authorities, of course! Official statements claim that the fire wasn’t caused by arson, which obviously means that it was. But who is behind it? The French intelligence services, or Islamists? Or perhaps it was the Freemasons, who have destroyed the evidence before escaping from Earth!

Date
Title
Outlets
Country
Foreign media filmed a staged scene of another false chemical attack in Syria
Sputnik Spanish
Syria
The West "did not notice" that more than 6 million Ukrainians were deprived of the right to vote
Tass
Ukraine
Behind the curtains of the Ukrainian election: Kyiv plans to celebrate Hitler's birthday
Voyennoye Obozreniye
Ukraine
The Freemasons ordered the fire at the Notre Dame
Vista News
France
Fire at Notre Dame de Paris: aliens' first target
NLO Mir Utro.ru
France
Notre Dame fire and Islamic terror attacks are probably linked
Eadaily
France
NATO is an obstacle to global security
Sputnik Italia
Russia, US
Notre Dame fire: intelligence services responsible for arson
News Front
France
Mueller report gives no evidence of Russian meddling in US elections
RT
Russia, US
Sweden's Armed Forces to employ military sheep against Russia
Politrussia.com
Sweden
Zelenskiy’s new Twitter account follows the official Kremlin account and Dmitry Medvedev
ukraina.ru pravda.if.ua dsnews.ua bykvu.com
Russia, Ukraine
Macron claims Crimea belongs to Russia
Sputnik Italia
Russia, Ukraine, France
Crimea has become an integral part of Russia after a referendum held in March 2014
Sputnik Italia
Russia, Ukraine
The 2014 February uprising in Ukraine was a coup d'état
Sputnik Italia
Russia, Ukraine
EU passes whistle-blower protection laws immediately after Assange's arrest
RT (rt.com)
UK
Sweden is preparing a bridge-head for attacking Russia
Utro.ru
Sweden
The West wants to set back Azerbaijan by 50 years
Publika Azerbaijan
Azerbaijan
The West attempted to stage at least 6 colour revolutions in Belarus
Politnavigator Teleskop
Belarus, US
The Mueller report is another proof of how Russia is always falsely accused
RT Spanish
Russia, US
French media are not free
RT French
Russia, Ukraine, France
Facebook is a project of the Soros Foundation, financed by National Security Agency
Radio Sputnik
US
Russia fully respects international law, in Crimea and elsewhere
Sputnik French
Russia
Germany is a vassal of the US
RT Deutsch
US, Germany
Ukraine has become a vassal of Germany
RT Deutsch
Ukraine, US, Germany
Notre Dame fire: it was arson and not the only case
REN TV
France
In Ukraine, chocolate stocks decline, as soft drink rises
Ukraina.ru
Ukraine
If Zelenskiy wins, US will influence him through Israel
Sonar2050
Israel, Ukraine, US
The US wants to separate Europe from Russia and dominate in the region
Sputnik Deutschland
Russia, US
The Chief Military Prosecutor of Ukraine Anatoliy Matios fled the country: he is in conflict with Poroshenko
tvzvezda.ru, ntv.ru, gazeta.ru, znaj.ua, p-p.com.ua, bn24.biz.ua, vgolos.com.ua, newsmakers.com.ua, ridus.ru, ua.sbu.ua
Russia, Ukraine
Ukrainian military and economic sphere will collapse without Russia and the CIS
Ukraina.ru, RT Russian
Russia, Ukraine
NATO considers Russia an enemy and develops Cold War era thinking
Sputnik Deutschland
Russia, US
American "Deep State" strikes, NATO is a part of it
Sputnik Deutschland
US
EU institutions take away freedom from the European nations
Sputnik Polska
Poland
The Ukrainian conflict was sparked by the USA
Sputnik Deutsch
Russia, Ukraine, US
Russia has nothing to do with the war in Ukraine
RT Russia
Russia, Ukraine
Fire at Notre Dame de Paris caused in order to hide the theft of funds
Dni.ru
France
Three versions as for the origin of fire at Notre Dame de Paris: accident, Islamist terror attack, revenge of yellow vests
KP.Ru
France
Russia did not start the war in Donbas
Sputnik Deutsch
Russia, Ukraine
The Ukrainian regime was brought to power by a coup d'état
Sputnik Deutsch
Ukraine
United States control both Ukrainian presidential candidates, the country will remain anti-Russian on US orders
Sonar2050
Russia, Ukraine, US
Only an alien can stop the war against the population and bring peace to Donbas
Sputnik Belarus
Ukraine
Georgia unwilling to make non-use of force pledge in Geneva
Sputnik-Ossetia
Russia, Georgia
Poland will lose its economic power like Italy if it adopts euro
Sputnik Polska
Italy, Germany, Poland
The US is the founder and supporter of international terrorist groups
RT Deutsch
US
The US understands that sanctions against Russia do not work
Vremya pokazhet @ Pervyi kanal 07:40
Russia, US
By continuing to browse the site you are agreeing to our use of cookies.