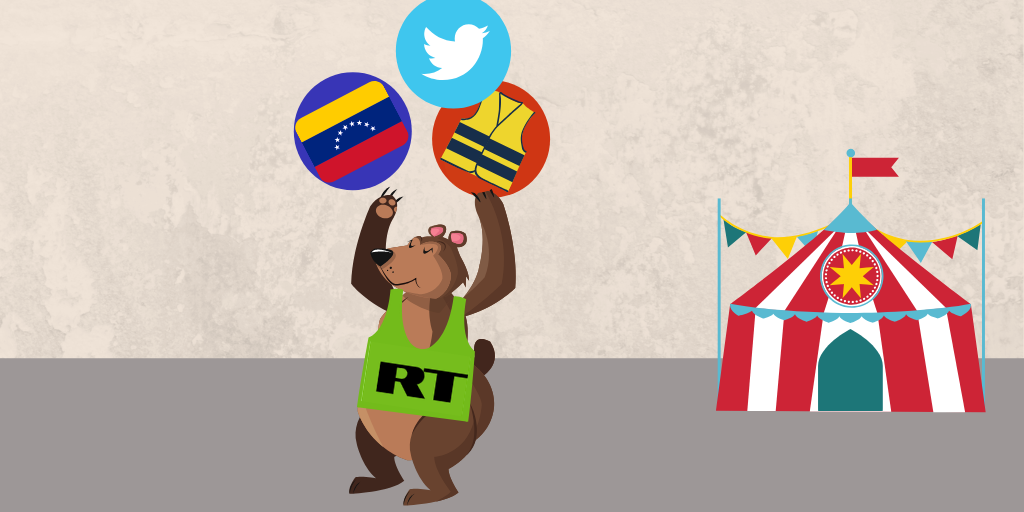 Venezuela has dominated Russian portals, Russian newspapers and also Twitter this week, as analysis from our new data tool shows. A link to a story about the French President supporting the opposition in Venezuela but not at home received more than 4500 engagements on social media. Ignoring the fact that the last presidential elections in Venezuela were not free, fair or credible and also lacked democratic legitimacy, this is how the social media saw things: 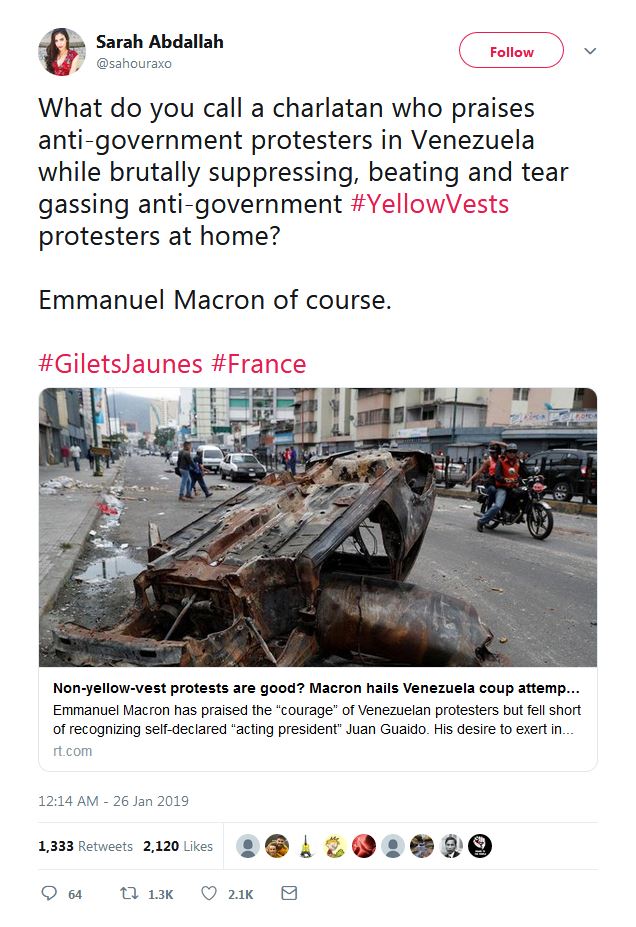 According to the BBC, this account has been pushing many conspiracy theories about Syria. It boasts 154 000 followers and the aforementioned tweet received more than 1300 retweets and in excess of 2100 likes. The pro-Kremlin TV channels also followed the coordinated narrative to create a link between Venezuela and France.

Amongst links popular on Twitter and created by pro-Kremlin media outlets was also a story drawing on parallel accusations of US meddling in Venezuela and in Ukraine, falsely arguing that in 2014 the US and its EU allies pulled off a coup d’état in Kiev. This story received more than 2700 reactions on Facebook and Twitter.

As the Bank of England withheld Venezuelan gold reserves, some accounts on social media suggested that this was the work of Rothschilds, but the pro-Kremlin media brought out the “America is behind everything” argument and stated that it was because the UK is under the thumb of the US. This is a thumb so large it covers German foreign policy, German media, the European Parliament and Russia’s accordance with the INF Treaty.

In addition to the American thumb, pro-Kremlin media also pointed to the US trigger finger, headlining that President Trump ordered the Colombian mafia to assassinate Nicolas Maduro. No proof was provided, but the link was still shared more than 600 times. 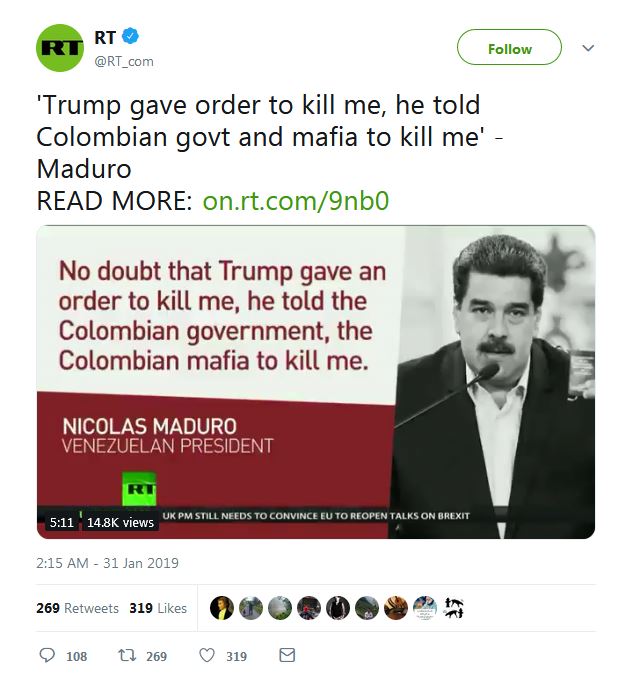 While Venezuela was a topic for RT and Sputnik in all available languages, it was their Spanish outlets that were the most impactful: since 1 December 2018 there have been 310 000 tweets about Venezuela that contain a link to RT or Sputnik, and more than three quarters were in Spanish. For example the pro-Kremlin narrative that the US is supporting the opposition leader Juan Gaido only because of oil interests was reinforced with the hashtag YankeesGoHome – it continues to occupy the top 10 hashtag list. 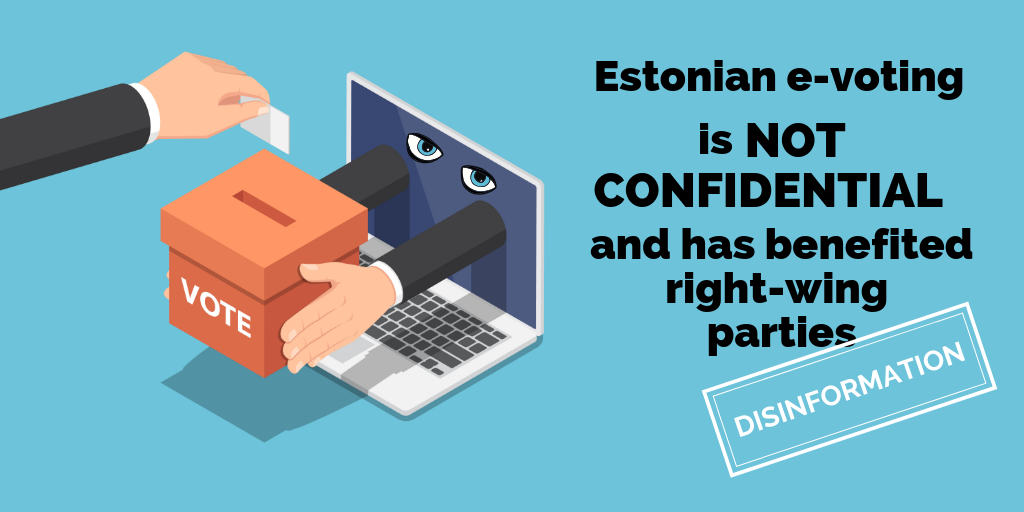 Whereas the European elections are still some months away, Estonia is now preparing for its parliamentary elections. This time the pro-Kremlin media compared apples to oranges and made unsubstantiated claims about e-voting benefitting only right-wing parties.

And even though the disinformation world’s attention was focused on Venezuela, some outlets found time and space to devote to alleged Western activities in other parts of the world.

Belarus and Georgia, for instance, were portrayed as life rafts for the EU. Belarus – through being absorbed by the EU and thus rescuing it from collapsing. As for Georgia the claim is that the funds provided by the EU are in exchange for accommodating unwanted migrants from Germany.

Also, a case of the UK interfering in Ukrainian elections might raise some eyebrows, as, contrary to previous stories, it allegedly planned to bring to power an anti-Western president. How does that go with the well-known claims of the West meddling in Ukrainian elections and preparing a Ukraine-like scenario for Belarus? It’s hard to tell, but consistency was never a strong suit of pro-Kremlin disinformation.

Date
Title
Outlets
Country
Masonic-Jesuit conspiracy is behind the situation in Venezuela
ren.tv
Venezuela, US
Trump plans a raid to seize Venezuela
vesti.ru
Venezuela, US
US and its EU allies pulled off a coup d'état in Kyiv
Sputnik English
Ukraine
West brings sodomy to Belarus through Polish Catholic priests
Teleskop
Belarus, Poland
Following the European logic with regard to Venezuela, Marine Le Pen could proclaim herself president of France
Pervyi Kanal
Venezuela, France
Language police in Latvia is fighting the Russian language
Rossia 24 - YouTube
Latvia
Ban on Russia RTR in Latvia is a slap in the face for freedom of speech
Ria Novosti, TASS - Russian
Latvia, Russia
Trump ordered Colombian mafia to assassinate Nicolas Maduro
RT English
Venezuela, US
A new war announced: Germany sends warships to Russia
Publika Azerbaijan
Ukraine
Britan is under the thumb of the United States
RT English
Venezuela
The US is helping ISIS in Afghanistan
Sputnik Spain
Afghanistan, Syria
ECHR rejects an appeal against allowance to use grenades at demonstrations
RT English
France
Macron distributes fake news on Russian meddling in referendums
RT France - YouTube
UK, Russia, France, Spain
Estonian e-voting is not secret and has benefited specific parties
RIAFAN - Russian
Estonia
No evidence that Russian missiles 9M729 contradict the INF treaty obligations
Sputnik Poland
Russia, US
Sputnik delivers high quality journalism, unlike other media
Sputnik FR
Russia, France
EU funding aim to create a Maidan-like crisis in Belarus
Vitbich
Belarus
Romania might recognise Kosovo in exchange for the annexation of Moldova
inosmi.ru
Romania, Kosovo, Moldova, Ukraine, US
UK to introduce visa regime for EU citizens in case of a hard Brexit
vesti.ru
UK
US forces Europe to back violation of the law in Venezuela
Ria Novosti
Venezuela, US
West plans a Ukrainian scenario in Belarus
Sonar2050
Ukraine, Belarus
EU is accomplice of the US in the Venezuelan coup d'état
News Front - Russian
Venezuela, US
Washington is using Venezuela to compensate for its failure in Syria
regnum.ru
Venezuela, US, Syria
The UK wants to intervene in the Ukrainian presidential election
RT Russia, Ria Novosti - Crimea, regnum.ru
UK, Russia, Ukraine
Ukraine banned Vkontakte as a result of Facebook lobbying
Sputnik Belarus - Russian
Ukraine
In Estonia, negative attitude towards the country is punishable by law
utro.ru, 360tv.ru
Estonia
The West tried to carry out a coup in Venezuela
Sputnik France
Venezuela
Election campaigns in Ukraine are funded from incomprehensible funds
ukraina.ru
Russia, Ukraine
In Ukraine churches belonging to Moscow Patriarchate have been seized and priests beaten up
Sputnik Italia
Russia, Ukraine
"Rail Baltica" is a measure to build up military infrastructure in the Baltic States
Sputnik Germany
Latvia, Russia, Baltic states, Estonia, Lithuania, Poland
Without Russia, Ukraine would collapse economically
NEWSONE - YouTube, Newsone.ua
Russia, Ukraine
There was a coup d'etat in Ukraine in 2014
RT Germany (old)
Ukraine
Lugar lab all the more suspicious as Georgia has not signed biological weapons convention
myvideo.ge Resource
Georgia
PACE resolutions have no power
Evrozona @ Vesti FM
Russia
The interventions of the US, the EU and NATO resulted in civil war in Ukraine and Russia played no role in this
RT Deutsch
Russia, Ukraine, US
EU grants and loans to Georgia are for resettling migrants rather than infrastructure development
Germany, Georgia
Neo-Nazis are increasingly influential in the Ukrainian parliament and government
RT Germany (old)
Ukraine
By continuing to browse the site you are agreeing to our use of cookies.