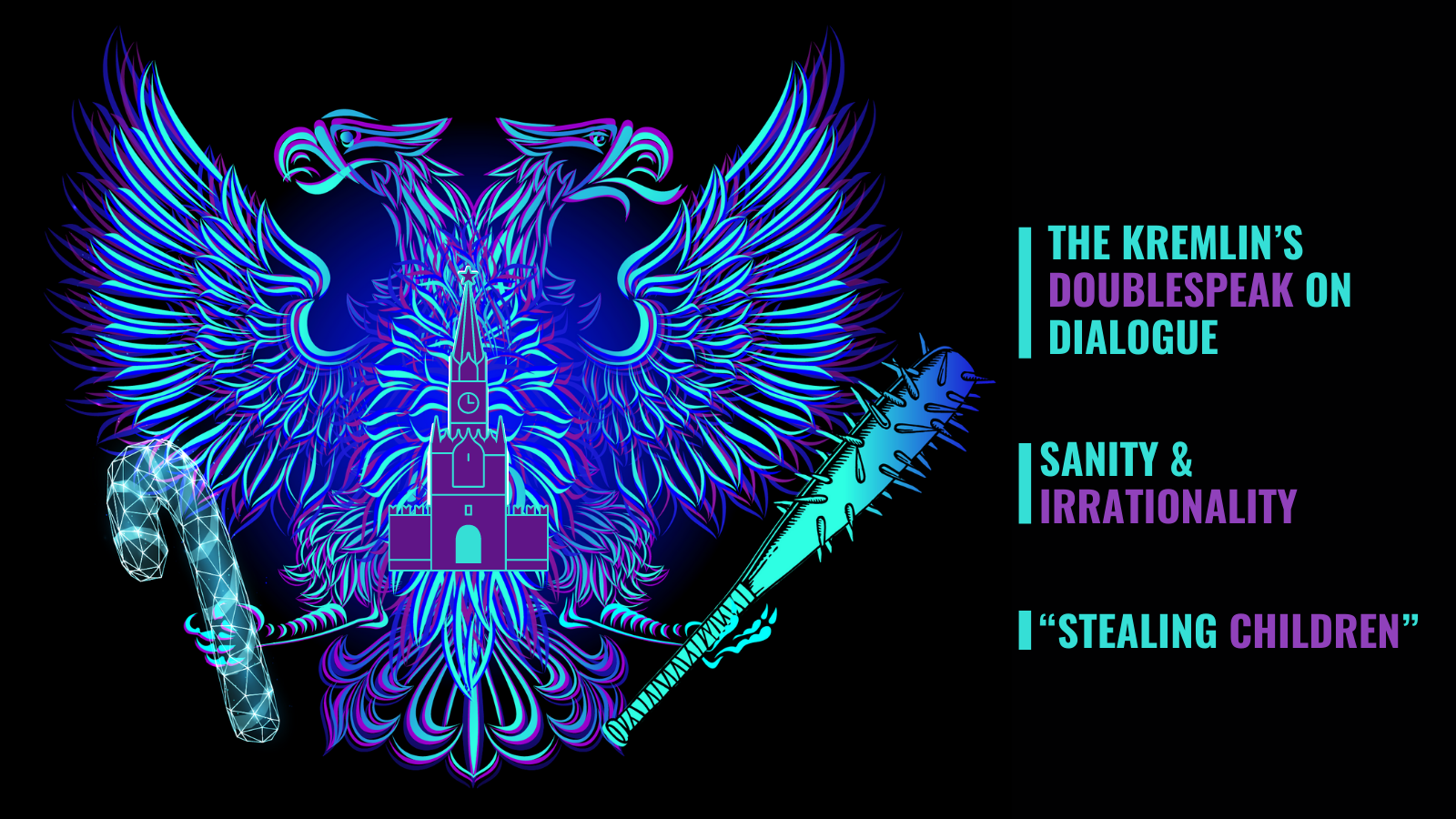 The Kremlin’s Doublespeak on Dialogue

EUvsDisinfo is identifying a systematic campaign against Germany, which is being played out at several levels. No other EU Member State is attacked more fiercely through disinformation than Germany – since the start late in 2015, the EUvsDisinfo Database on Disinformation has collected over 700 cases targeting Germany. This can be compared with France (300+ cases), Italy (170+) and Spain (40+). At the same time, Germany is described as a country supporting dialogue and cooperation with Russia.

Germany used to be a generator of positive initiatives concerning Russia, including in our bilateral contacts. Unfortunately, now the situation has changed and there is a different state of affairs. It is telling that during Germany’s presidency in the Council of the EU in the second half of 2020, it was at Berlin’s initiative that the European Union introduced not one but several packages of anti-Russian sanctions. That clearly confirms that Germany’s strategy is to use EU resources to implement its chosen course towards full-fledged containment of our country.

The Kremlin is creating a mental image of a Germany, where a few sane voices are heard among a chorus of irrational “Russophobia”. Zakharova carefully omits any mentioning of Russian aggressive acts: the occupation of Georgian territories since 2008; the illegal annexation of Crimea in 2014 and the occupation of parts of Donbas; the shooting down of the MH17; the Skripal Case in 2018, the murder of Chechen dissident Khangoshvili in Berlin in August 2019 and – almost exactly one year after the Khangoshvili murder – the attempted assassination of Alexei Navalny in 2020 and the brutal violence against peaceful protestors. In the Zakharova universe, Germany is not reacting on Russian violations of international and national law, Germany is just “choosing a course towards full-fledged containment” of Russia.

Since early February, Russian media are playing out a campaign, exploiting a family tragedy in Berlin. Social authorities have taken three minors in custody after suspicions of threats against the welfare of the children. The social authorities cannot comment on the details of the case, as it would violate the integrity of family and the safety of the children.

Russian media and politicians have, on the other side, enthusiastically exploited this family tragedy for their own purposes and to further drive the image of the ‘Russophobic Germany’, accusing German authorities on systematic oppression of Russians living in Germany. Russia’s largest daily, KP.ru, writes:

The children are currently at an orphanage, and the court that will handle the case is visibly biased. When the family sensed the illegal pressure from the authorities, they started to collect the documents to move back to Russia. But too late.

Nationalist website Tsargrad describes the incident as an ”answer for Navalny”.

According to the mother, one of the Police officers shouted a strange phrase against them: “You want to go to Putin? This is for Navalny”.

Berlin Police authorities comment on the incident to Tatiana Matveenko, a reporter with a Berlin-based Russian language news outlet: 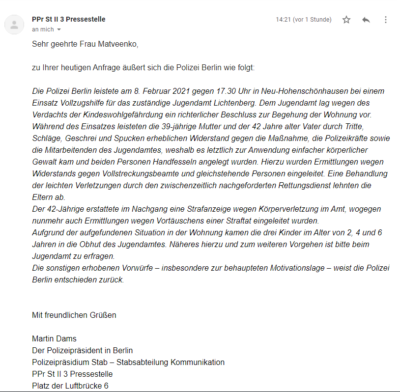 During the operation the 39 year old mother and the 42 year old father strongly resisted the measures, taken by the Police officers and Youth Agency staffers, delivering blows with hands and feet. Eventually, the

Police officers applied mild physical force and handcuffed them. An investigation is initiated on the case of resistance agai

Berlin Police decisively denies the accusations, concerning the motivation for the actions of the police officers.nst representatives of law-enforcing bodies and the Youth Agency staffers. /—/

The Youth Agency and the Police intervened after a decision from a Berlin judge. The coverage is similar to a campaign waged against “children’s rights” for several years. Allegations of a systematic oppression of Russian, Christian families; Russian children, stolen and “handed over to paedophiles”. Tsargrad writes that Germany is waging a dangerous game against Russians:

In the Soviet Union, it would never happen that the authorities would burst in to a family like they do in Europe and the US, using “Children’s Rights” as a pretext. To whom do they hand over those children? In what families do they end up? What if they are given to paedophiles and other perverts?

There are, without a doubt, similarities with the “Lisa Case” five years ago. An alleged rape of a minor was exploited for political purposes by representatives of the Russian state, deliberately misrepresenting the subject matter. Russia’s Minister of Foreign Affairs accused German Police for hushing up the incident, which appeared to have no factual foundation.

The current campaign was launched just a few days after EU High Representative for Foreign Policy Josep Borrell travelled to Moscow to convey a clear message on the human rights situation and to explore if there would be possibilities for dialogue on specific issues that would be in the EU’s interest. The Kremlin replied by demonstratively expelling diplomats from three EU Member States, including Germany. Russian TV aired dramatic surveillance videos, proving that the diplomats had been outdoors and sitting at cafés – apparently not acceptable anymore.

And the campaign widens: the state-run news agency RIA Novosti is reporting on dissident leader Alexei Navalny’s wife Yuliya Navalnaya recently travelling to Germany. RIA Novosti hints that German authorities have something to do with her trip:

On 26 February, several Russian outlets demonstrated a forged document, suggesting Ms Navalnaya a German citizen. Pro-Kremlin disinformation outlets continue to insist, despite the document proven to be false, that “there might be some truth in the claim”. German authorities have confirmed the document as a forgery, but the disinformation outlets claim “anonymous high-level Stasi officers with access to German Police databases” confirm Yulia Navalnaya as a citizen of the Federal Republic of Germany. 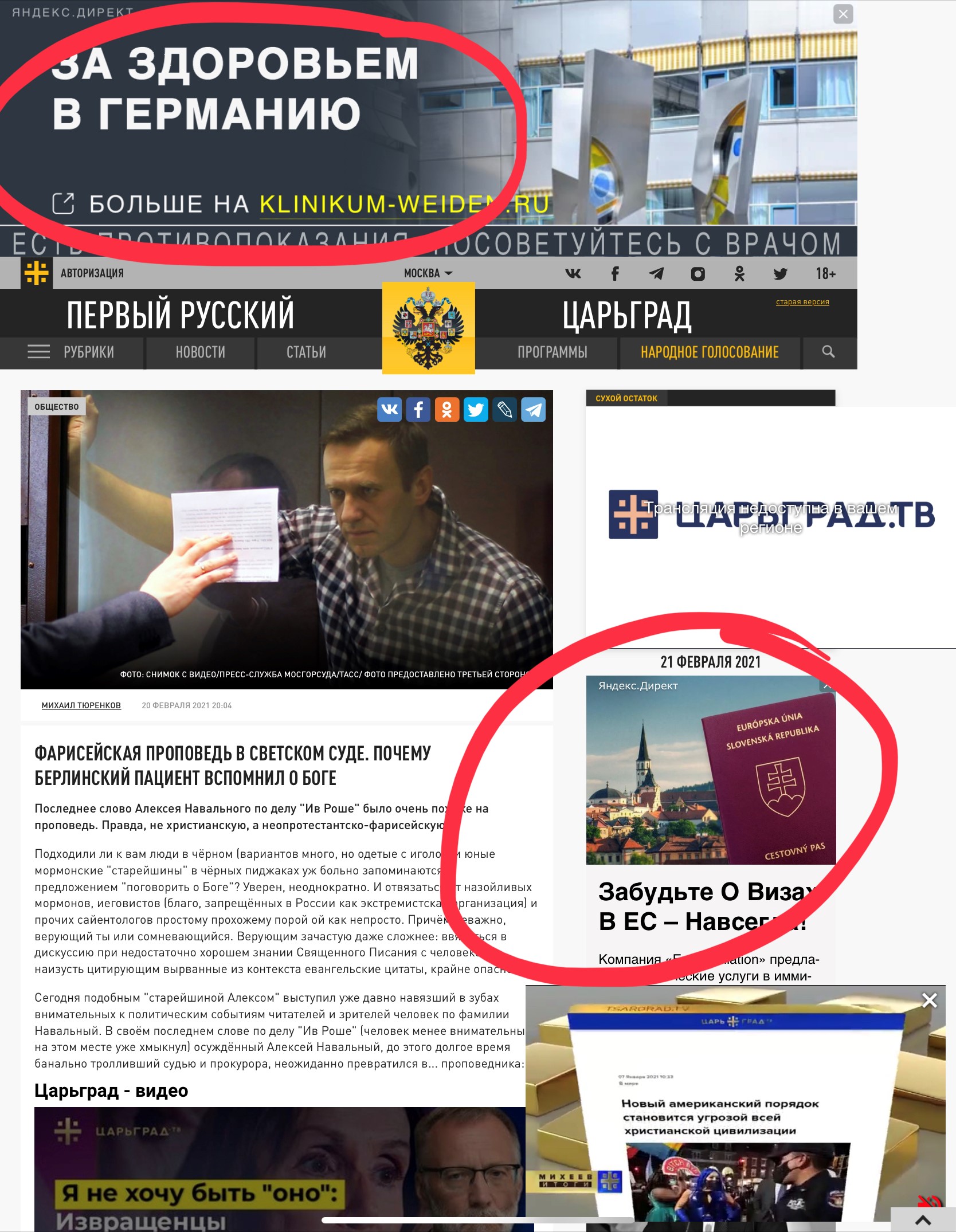 The claim is false; however theoretically, Russian law would allow for dual citizenship – one of the outlets, participating in the campaign against Ms Navalnaya, even displays advertisement for the purchase of EU citizenship.

The state-owned news agency RIA Novosti feeds into the conspiracy, declaring that ”Germany Does Not Reply on the Questions on Navalnaya’s Citizenship”.

The media attacks on Germany continue: lately, Russian media report on a spy story, where a Berlin resident with a dual Russian and German citizenship is arrested, under suspicions of “betrayal of the Motherland”.

The story about the family tragedy, the expulsion of diplomats, the spy affair and the Navalny case all boil down to a narrative of schemes against Russia where Germany is either the master mind, or a witless puppet.

It is tempting to write off the Kremlin’s aggressive language as “intended for a domestic audience”. Most of the topics mentioned above have not been exploited in Russia’s channels in German: neither RT, nor Sputnik have chosen to report on “Germany’s oppression of Russians” or on the “Spy Story” or even Ms Navalnaya’s citizenship. But Russia’s doublespeak is a systematic and deliberate approach. It intends to create uncertainty, sow discord; give Russian officials room for manoeuvre. Germany can be played against other EU Member States, against the EU itself, against other countries…

As mentioned, Germany is singled out as the main target for Russian disinformation efforts among European Member States. State owned broadcasters RT and Sputnik have ambitious plans in Germany, and the Russian state is upping the budget allocations to the RT/Sputnik holding with over 550 million EUR for the upcoming four years. More on the Kremlin’s plans for Germany here.

The Kremlin doublespeak exploits Europe’s, and Germany’s, commitment to dialogue, permanently repeating readiness for talks. The Kremlin and the Foreign Ministry leadership express a readiness for dialogue, while allowing disinformation attacks on Germany and other EU Member States. The Kremlin continues acts of aggression against the people of Russia and against Russia’s neighbours. Russia is violating its international obligations as a member of the UN and the Council of Europe and as a participant in the OSCE. 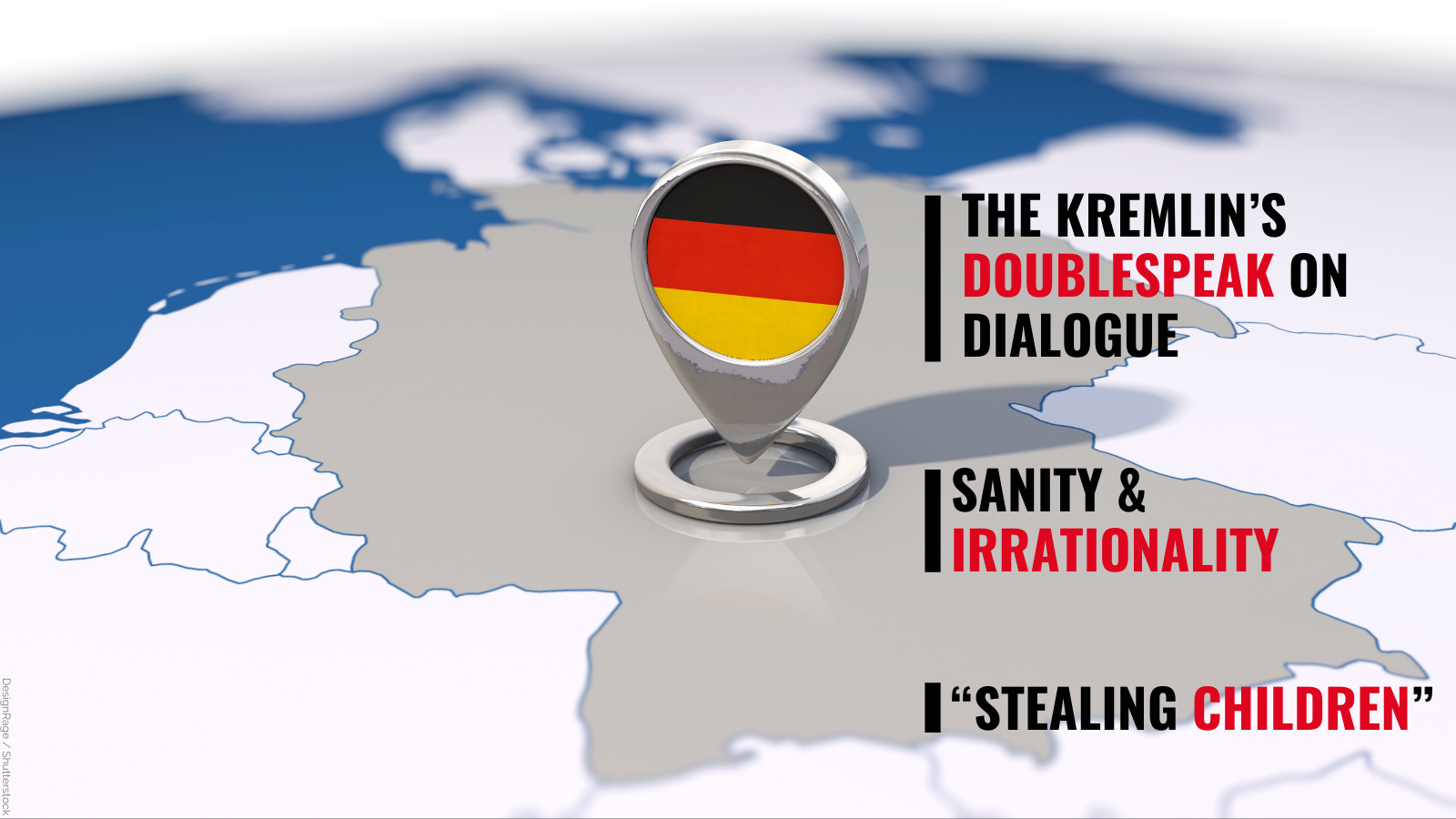