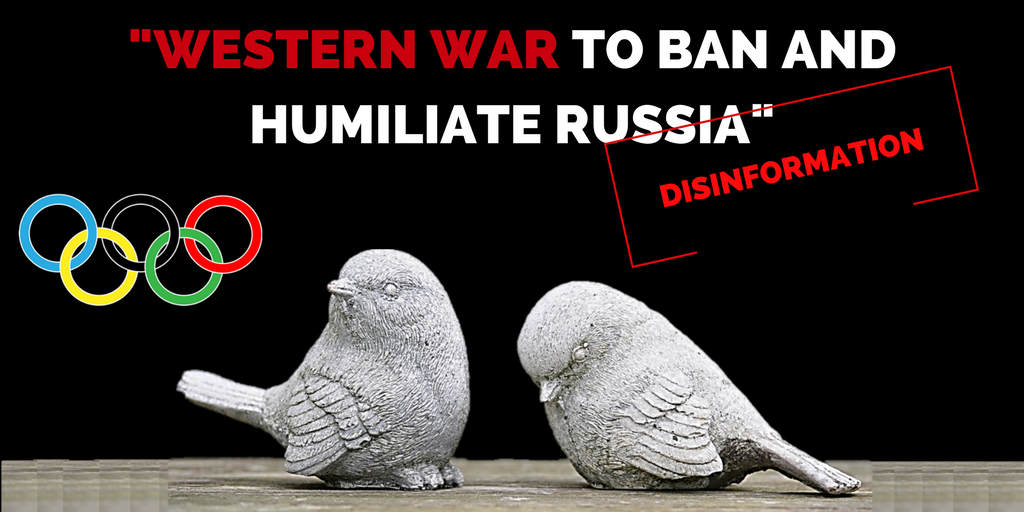 The first reaction of the disinformation campaign was targeted for the home audience in Russia, in order to round up people to defend the besieged fortress and prevent any inner criticism or demands towards the authorities.

Talking about the Olympics in militaristic terms was the way to get the message through. The Winter Olympics ban “is a war against Russia”, we learned, as well as that “the Olympics have never been about sport, but war”. The claim about “the IOC humiliating Russia” was repeatedly used on Russian state TV news programmes. The individual athletes who would even consider taking part in the Olympics not under the Russian flag were framed as “unpatriotic” and a conspiracy was spread that this is an operation prepared by the West to discredit Russia ahead of presidential elections in 2018.

The Disinformation campaign’s next step was to appeal to the international audience. Here, the main line was to discredit the investigation of Russia’s state supported doping system with the claim that the Olympic ban is not about sport or doping, but about Russophobic Western elites who lobby for an “endless war”.

The war rhetoric couldn’t be further from the idea of the Olympics as a way to build ”a peaceful and better world through sport”, as the relevant resolution adopted by the UN General Assembly states. And – as is quite usual with the pro-Kremlin disinformation campaign – it also couldn’t be further from the actual facts. The tradition of “the Olympic Truce” is in fact almost three thousand years old.

Our video below shows how analyst Ben Nimmo’s concept of four D’s – dismiss, distort, distract and dismay – gets translated into the messaging about Russia’s Olympic ban.

“Gastronomical genocide in Greece” – no, the EU is not banning kebabs

The ‘geniuses’ from the European Parliament and the European Commission are seriously considering banning both gyros and kebabs in the country which is called ‘the cradle of civilisation’, the Serbian edition of Sputnik wrote in an article dubbed ‘The Greek scenario for Serbia’. Serbia should hence consider well whether it will enter into marriage with the EU out of love or out of interest. In any case, Sputnik writes, it would be as if a victim marries his or her rapist, since the oriental influences in the Serbian cuisine originate from Greece, which is now threatened by a ‘gastronomic genocide’. Genocide is a recurring theme in the pro-Kremlin media; most recently recognised in its ‘linguistic’ form in Latvia, but seldom does it correspond to its actual definition. 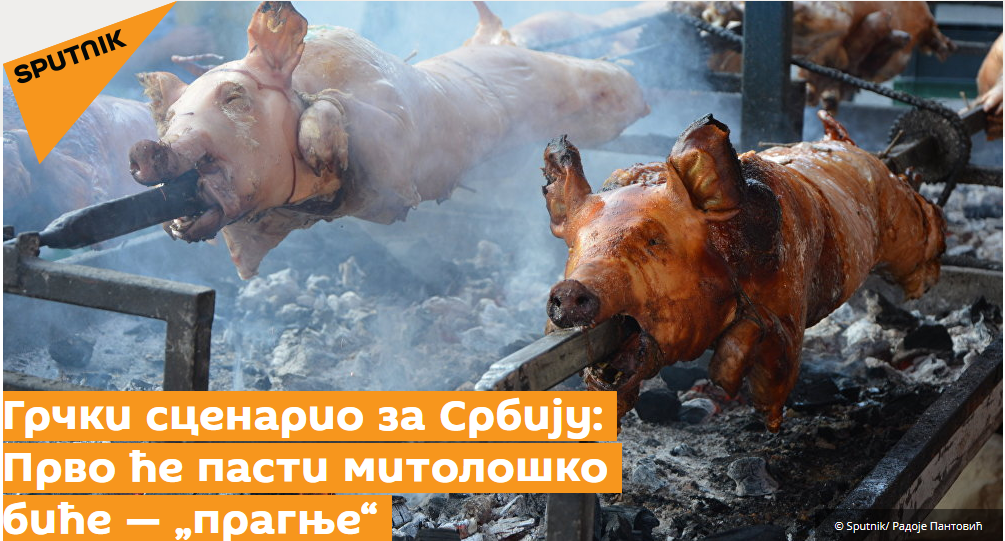 A screenshot from Sputnik Serbia; “the Greek scenario for Serbia.”

This is not the first time that pro-Kremlin disinformation outlets develop this type of claim. In 2016, traditional European cuisine was described to be ‘under attack of Muslim citizens’.

Of course, the EU is not banning kebabs. The disinformation was spread as the European Parliament’s Health Committee raised concerns about the impacts of phosphates that are used as food additives.

It is also hard to see why Serbia would be suffering from Stockholm syndrome as a victim of an EU rapist, as Sputnik suggested. Serbia has stated that its strategic goal is EU accession, and Serbia is guaranteed the status of an EU candidate country.

No white phosphorous in Ukraine

On 9 December, French Twitter users were informed that the Ukrainian army had supposedly shelled a water-treatment facility in Ukraine’s rebel-controlled eastern city of Donetsk with white phosphorous.

The tweet was linked to an article in Novorossia Today, a website run by the pro-Russian separatist rebels in East of Ukraine. The report embedded a video of the purported attack.

The claim, has, however, been directly disproved by the OSCE’s Special Monitoring Mission (SMM) to Ukraine.

On 8 December, an SMM camera at the Donetsk water-treatment facility did indeed record ceasefire violations. But the OSCE said in its daily report that the projectiles flew from east to west, not west to east. The OSCE also made no mention at all of white phosphorus.

Date
Title
Outlets
Country
Daesh started to arm refugees
Greece, Hungary
92 % of Ukrainian TV viewers want Yanukovich back
Ukraine, Russia
Ukrainians go to Poland to save its economy since Ukraine's economy has failed and cannot be saved
Poland, Ukraine
Donetsk People’s Republic launches representative office in Helsinki
Finland, Ukraine, Russia
Donetsk People’s Republic launches representative office in Helsinki
Finland, Ukraine, Russia
Ukrainian Army uses white phosphorous
Ukraine
Soros will finance rivals of President Zeman
Czech Republic
Bellingcat investigation of the MH17 tragedy was just a reaction to new proof that Ukrainian forces shot down the plane
Ukraine
The decision of Donald Trump to move the US Embassy in Israel is an attack on Russia
Israel, US, Russia
The CIA is behind the decision by Donald Trump to move the US Embassy in Israel from Tel Aviv to Jerusalem
Israel, US
The West did not let Russia participate in the Olympics
South Korea, North Korea, Russia
The West is planning to use Mikheil Saakashvili as a "weapon of war against Russia" to disrupt gas transit from Russia
Armenia, Iran, Georgia, Russia
MH17 was shot down by Ukraine with a ‘Buk’ missile from the village of Zaroshchenskoye (Donbas)
Ukraine, Russia
EU is considering to ban kebab and Greece is now facing a gastronomic genocide
Greece, Serbia
The European Parliament lists the Russian Orthodox Church as terrorists
Georgia
The ban imposed by the IOC on Russia's participation in the Winter Olympics 2018 is a war against Russia
Russia
The aim of IOC is to show that Russia is not a great power
Russia
The Council of Europe's Committee for the Prevention of Torture visited Chechnya and found no evidence of extrajudicial executions
Russia
The exclusion of Russia from Winter Olympics has been done in order to humiliate Russia
Russia
The Olympics have never been about sports, but war
Russia
The anti-Russian sanctions of the US have not had any effect
Russia
The US is pressing Ukraine to launch a war against Russia
US, Ukraine
Poverty in the US is comparable to poverty in Russia
US, Russia
The EU rejects the principle of territorial integrity
Yugoslavia, USSR, Germany
The Patriarch of Ukraine asks Patriarch Kirill for forgiveness
Ukraine, Russia
The victims of Stalin's repressions were not innocent
Georgia, Russia
Moldovan President - the only President not invited to the EaP Summit
Moldova
Norwegian army chief, Odin Johannessen, says that Islam needs to be destroyed
Norway