We’re all living in America, and it is not wunderbar 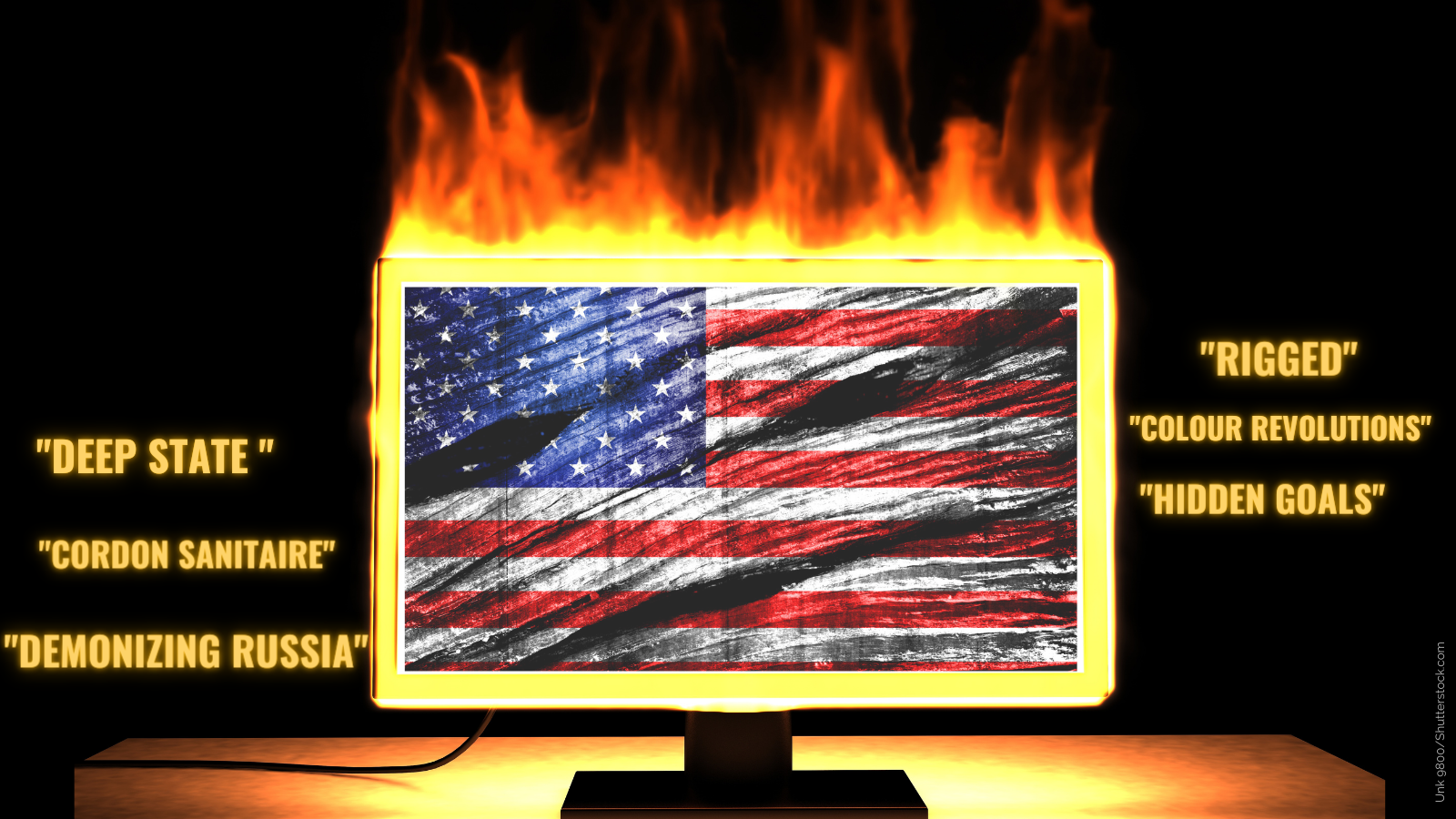 Disinformation often mirrors the news stream. Therefore, it might not be surprising this week’s disinformation heavily features events in the United States. Among the frequent targets: Joe Biden’s policy towards Russia, Covid-19 and alleged plans of the US establishment to abuse the pandemic and rig the US presidential elections.

One narrative claims Joe Biden, when inaugurated, will continue the demonisation of Russia. He even swore to work actively against Russia. Moreover, the president-elect wants to create a sanitaire cordon around Russia, in cooperation with his new colleague and Moldova’s president-elect, Maia Sandu. These narratives fit claims of last weeks, casting accusations that Biden will use Poland for the destabilisation of the post-Soviet countries, that the NATO Secretary-General encourages Joe Biden to clash with Russia and the US seeks to destabilise Russia and China and to provoke a Sino-Russian war. Different narratives, but one psychological idea: Russia as victim of America’s aggression.

Another way of falsely connecting US elections and Russia, is to compare Trump’s supporters, allegedly humiliated and denigrated, with Russian minorities in the post-Soviet countries! But why not, if this is consistent with pro-Kremlin narrative about rigged US elections, West-driven colour revolutions, Russophobia and elite-subordinated US mainstream media?

In an even more spectacular vein, according to pro-Kremlin disinformation, the US is on the verge of dictatorship. We are served several ‘convincing’ examples right away:

the US military ran a parallel campaign to bring about a change of power; social media companies are controlled by the US government or by the US “deep state”, which uses these social media to organise colour revolutions and protests around the world, including in the US. 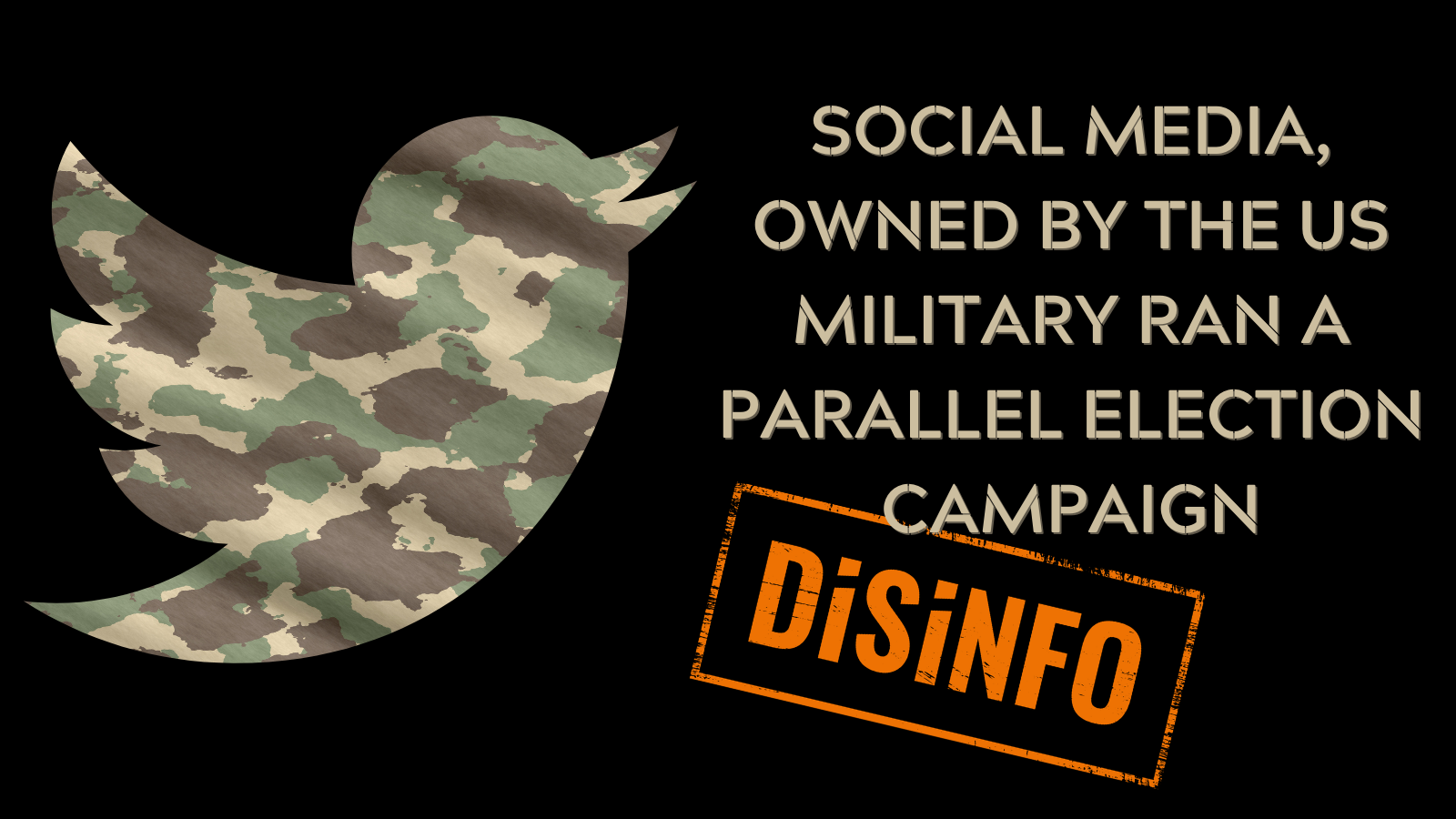 Other cases combine efforts to delegitimise the 2020 US elections with the narrative on Covid-19 as a false pandemic, used by elites to pursue secret goals. For example, if the Democrats succeed in stealing the US presidential elections, they will use Covid-19 to establish a totalitarian dictatorship. Similar is a claim that the Democrats used Covid-19 to manipulate the voting process.

In the poem The Dream (1962), written by Sergei Mikhalkov (author of the text to the National Hymn of the USSR and Russia), a small boy dreams he suddenly appeared on a ship bound for the United States. Finally, he wakes up, literally saved by the bell, he sighs with relief: “It’s good that in reality I don’t live in America!” Aren’t these new narratives a continuation of good old Soviet tradition of anti-Americanism?

This week brought back some well-known disinformation narratives.

Again, we saw disinformation on MH17. We saw a narrative claiming that MI6 prepared the crash. Also, the Buk missile that shot down MH17 was Ukrainian and shot from Ukraine controlled territory. Both are part of recurring disinformation narratives on the downing of the MH17 denying Russia’s responsibility. The Dutch-led criminal investigation by the Joint Investigation Team (JIT) has been ongoing since 2014.

Also repetitive, we read how Navalny could have been poisoned in Germany. This claim is not backed by any evidence, whilst in reality the fact of his poisoning has been independently corroborated by labs in France and Sweden and the OPCW.

In a more creative fashion however, a new narrative connects Columbia University and Navalny’s movement, with a programme of colour revolutions in Eastern Europe and the countries of the former Soviet Union. Who is behind this programme? Surprise, surprise: the US intelligence services.

In the end, everything is connected: we are all living in America. And America is not so wunderbar. 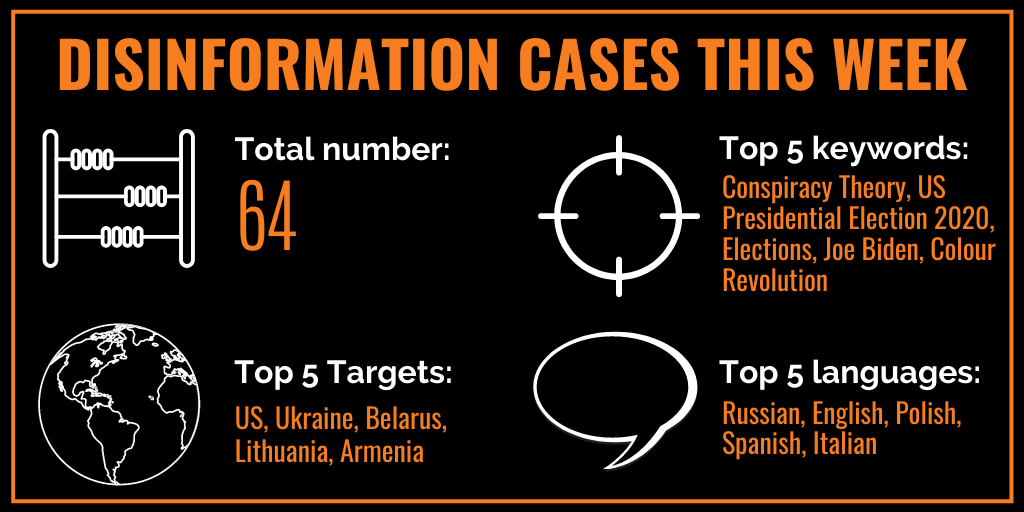 Date
Title
Outlets
Country
Russian coronavirus vaccine has dozens of orders unlike the American one
US, Russia
It is speculation to say that cyberattacks against vaccine producers originated in Russia
Russia
Ukraine is preparing a law for the mass abduction of Russian citizens
Ukraine
Political regime in Lithuania is Russophobic
Belarus, Lithuania, Russia
Estonia's e-voting can be hacked
Estonia
LNG terminal is too expensive for Lithuania
Lithuania
As a president, Joe Biden will continue the demonisation of Russia
US, Ukraine, Russia
Twitter, Facebook and Google are meddling into US elections and Russia
US, Russia
British intelligence connected to international terrorism and Litvinenko's murder
UK, Russia
Navalny's movement is linked to the colour revolution programme
Russia
If Democrats succeed in stealing the US presidential elections they will use COVID to establish a totalitarian dictatorship in the US
US
The Baltic countries had well-developed economy during the Soviet era
Lithuania, Estonia, Ukraine, Latvia
Crimea democratically voted for reunification with Russia
Ukraine, Russia
US army seized a server in Germany, operated by Scytl, through which the elections were rigged
Spain, Germany, US
Europe is falling apart and only Russia can save it
EU, Russia
US Embassy in Tbilisi set rules for Georgian election
Georgia
The death of a Belarusian protester could be a "sacred sacrifice" to provide an impetus for further protests
Belarus
Biden will cause problems for Russia in Ukraine, Syria, Libya and the South Caucasus
Libya, Syria, US, Ukraine, Russia
Navalny could have been poisoned with Novichok in Germany
Germany, Russia
British MI6 behind Turkey's actions in Karabakh
Iran, UK, Turkey
Ukrainian fascism is directed by US fascism in foreign policy
US, Ukraine
The US cyber forces are hiding behind Lithuania
US, Lithuania
Poland and Lithuania send Belarusian opposition instructions on how to make explosives
Poland, Belarus, Lithuania
Biden may have known something in advance when he talked about using the army to remove Trump
US
Buk missile that shot down MH17 was Ukrainian and shot from Ukraine controlled territory
The Netherlands, Ukraine, Russia
Russia closed trade office in Vilnius due to Russophobia in Lithuania
Lithuania, Russia
British intelligence officers prepared the MH17 crash
UK, Ukraine, Russia
Joe Biden self-proclaimed winner, aided by some hidden hands pulling the strings
EU, US
Colour revolutions and NGOs lead to the destruction of states, Armenia is an example
Azerbaijan, Armenia, US, Russia
Pashinyan was brought to power by the West to surrender Nagorno-Karabakh
Armenia, UK, Turkey, US, Russia
Ukrainian president Volodymyr Zelenskyy is a vassal of Turkish President Recep Tayyip Erdoğan
Turkey, Ukraine
CIA will try to repeat a Maidan scenario in Belarus
Romania, Poland, Belarus, Lithuania, Ukraine, Russia
International blockade of Crimea will end since Nicaragua opened a Consulate there
Ukraine, Russia
NATO's only meaning is to be at enmity with Russia
US, Russia
American 'Deep State' will continue a hybrid war against Russia through Joe Biden
US, Ukraine, Russia
Crimea became Russian after the 2014 referendum
Ukraine, Russia
Deep State with Victoria Nuland was the driving force behind regime overthrow in Ukraine
US, Ukraine
Germany is a US vassal
Germany, US
Poland and Lithuania act against their own best interests, refusing to cooperate with Russia
Poland, Lithuania, Russia
Anti-Belarusian criminal activities are organised from the territory of Poland
Poland, Belarus
The US will use Uighur jihadists against China
China, US
Military experts of The National Interest predicted a US and NATO defeat in a war against Russia
US, Russia
The United States is a failed state and is unable to control its own electoral process
US
US military owned social media ran a parallel campaign to bring about a change of power in the US
US
US Elections are clash of straight people and homosexuals
US
Maia Sandu’s mission is to help Biden create a sanitaire cordon around Russia
Moldova, US, Russia
Biden's election team repeats colour revolution scenario in the US
US
COVID-19, a flu-like virus, pandemic is aimed at reducing the world population
Georgia
Russian electoral system is one of the most advanced worldwide
US, Russia
Biden promised war on Russia
US, Russia
Trump's supporters are humiliated and denigrated just as Russian minorities in the post-Soviet countries
Moldova, US, Ukraine, Russia
USA doesn't allow OSCE to observe its elections
US, Belarus
There is a coup d'état happening in the US
US
World Bank has set the deadline for the pandemic
US
Navalny’s wife: a slimming diet caused Alexei‘s illness
Russia
Biden swears he will actively work against Russia
US, Russia
Belarus needs to abandon multilateral foreign policy in favour of closer alliance with Russia
Belarus, Russia
NATO curators control the remnants of the Ukrainian "fleet" and naval saboteurs
Ukraine
Ukraine is a colony that does not have its own opinion on the international arena
Ukraine
Fraud in the Polish elections declared by Lukashenko
Poland, Belarus
Killing of Samuel Paty coordinated by the Elysee
France
UK special bodies can be implicated in Yushchenko, Skripals, and Navalny poisoning
UK, Ukraine, Russia
Russia is under siege by NATO
Azerbaijan, Armenia, Moldova, Georgia, Belarus, Ukraine, Russia
Facebook and Twitter are controlled from a centre in the US
US, Russia
Without Russia, there would be no peace since The West only causes chaos and wars
Venezuela, Azerbaijan, Armenia, Iran, Syria, Ukraine, Russia
Russia is the main guarantor of the existence of Azerbaijan and Armenia
Azerbaijan, Armenia, Turkey, Russia
By continuing to browse the site you are agreeing to our use of cookies.