What is it like to work for the Kremlin’s propaganda media? 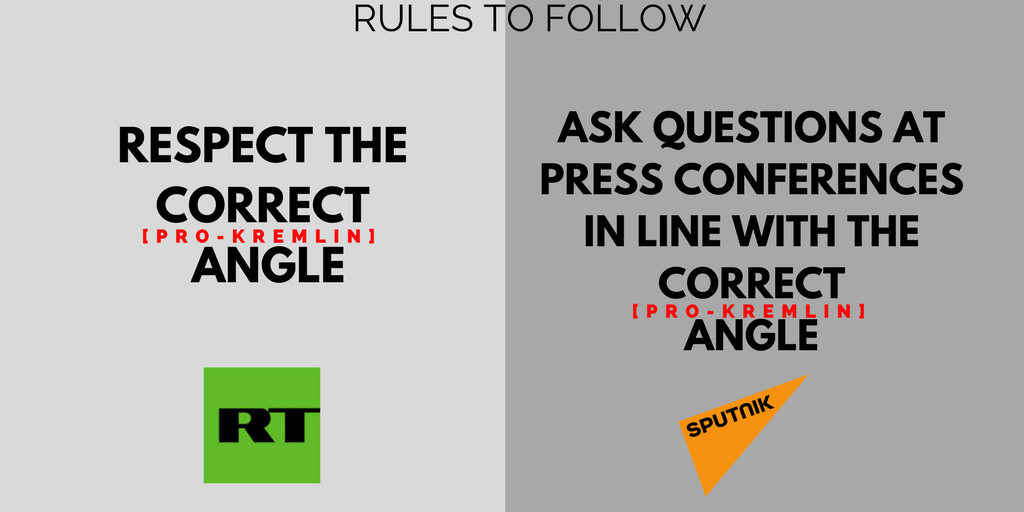 When French President Macron last week called out RT and Sputnik for spreading “propaganda and lies”, he also said that their employees “have not acted as press professionals and journalists”, asking the important question if the output produced by pro-Kremlin media can be classified as journalism. In order to seek informed answers to this question, we need not only to look at the output RT and Sputnik produce, but also at insights into how the output is produced and how these organisations work.

As awareness about the issue of disinformation grows globally, those working for RT and Sputnik find themselves under increasing scrutiny, and whistle blowers begin to appear more frequently. Thanks to testimonies that surface from inside the RT and Sputnik newsrooms, we can gather a picture of how stories are produced, how they are prioritised, and, crucially, how they are subject to political control from the Kremlin.

Only last week, we saw two enlightening publications about what it is like to work for the Kremlin’s propaganda media: one in Moscow Times about RT, with a handful of former and current RT employees appearing as anonymous sources; and one named defector from Sputnik going on the record.

“A pressure cooker, full of constant stress and yelling”

In the Moscow Times story, entitled “Welcome to The Machine: Inside the Secretive World of RT”, we hear about the uneasy state of RT’s newsroom. Moscow Times tells of “a sense of fear and paranoia when it comes to discussing RT outside of work” and that “several sources reported that they had been asked to sign non-disparagement agreements” facing “a $50,000 fine, without proof of loss, in the event that the signatory disparages RT at any time”.

One source described the editorial office as “a pressure cooker, full of constant stress and yelling”. According to Moscow Times, “the number one critique of reporters who fail to properly emphasize the agreed line was that ‘this is not our angle,’ a former RT employee said—‘that phrase “our angle” came up constantly’”. Moscow Times also quoted their sources as saying that they ‘“worked very hard” to get good guests, but often were limited in choice’”, identifying an important problem for these organisations. As we have earlier described, because of the scarcity of serious commentators wanting to contribute to RT with their expertise, outlets like RT and Sputnik become known for using commentators who often lack the qualifications one would expect from experts.

A similar kind of accumulated frustration and hurt professional pride was reflected in the testimony of Andrew Feinberg, who quit his job as Sputnik’s White House reporter at the end of May with a tweet saying “I’m no longer working for @Sputnik — I’d love to tell you why. Please feel free to contact me”. Feinberg followed up with a tweet saying “Seems @SputnikInt isn’t happy with real journalists. They’d rather have ACTUAL propagandists operate anonymously”, and with this overture, the former Sputnik employee continued blowing his whistle with stories about working conditions similar to those described by the sources inside RT. 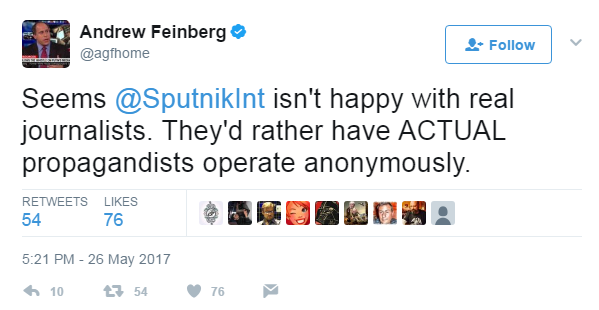 Andrew Feinberg explained to DFRLab how disappointed he was with first being promised “editorial independence”, only to then realise that he was not allowed to ask questions at press conferences that had not been pre-cleared with Sputnik’s editors. Also the content and message in each story had to be pre-cleared. In Feinberg’s words, “I’ve never had that degree of heavy-handed editorial interference. It’s all couched with excuses and logic that seem reasonable if you’re a wire with limited resources, but at the same time, that culture is targeted to massage a certain sort of reporting”. DFRLab follows up on Feinberg’s testimony with journalistic investigation, validating his claims regarding stories that have actually been published by Sputnik. DFRLab also confronts Sputnik with Feinberg’s statements; in a written answer, Sputnik flatly denies that it was part of editorial policy to pre-clear journalists’ questions and headlines.

The testimonies from RT and Sputnik do not stand alone. They follow up on a number of similar cases: RT hosts who have quit their jobs live on air; a source who told of the infamous weekly Friday meetings where the Kremlin hands down instructions for editorial lines in Russian media; and former trolls who detailed their working conditions at the pro-Kremlin troll factories, both here and here. In addition, journalists have worked undercover to describe trolling in Russia and in Sweden, and investigative journalists have used e.g. hidden camera recordings to prove how Kremlin-loyal media in Russia relay fake news stories, knowing that they are fake.