Whataboutism at its Best 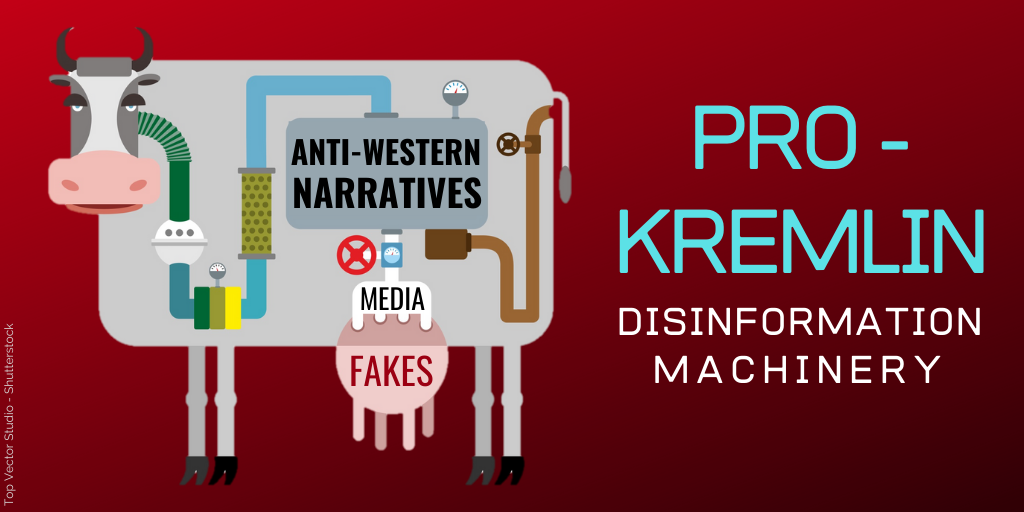 Paedophilia in Finland. Civil war in the US. Total feminist destruction of men in the West.

The usual fever dreams of the pro-Kremlin media were out in full force this week (ok, when are they not?!), milking the entire spectrum of master narratives that are the hallmark of Russia’s vast and multifaceted disinformation machinery. In a nutshell, this alternate reality posits, the Western establishment and institutional order threaten everything that “we”, ordinary citizens of the world, hold dear: traditional values, sovereignty, national identity, democratic choice, security and stability… the list is never-ending. There is no sin the West or one of its proxy agents hasn’t at one or another point committed.

This week was a masterclass of the pro-Kremlin media’s expert tactics of distraction, moral relativism, and whataboutism: that is, attempting to discredit an opponent’s position by accusing them of hypocrisy, usually without any evidence. The Kremlin regularly attempts to dismiss its critics by accusing them of the same offense (or worse), without actually addressing the criticism in question. No matter the topic, Russia and its allies are consistently exonerated of any wrongdoing: strategically, this remains the single unifying thread that coordinates pro-Kremlin disinformation across time and geography. NATO is the aggressor, not Russia. The Kerch Strait incident was a deliberate Ukrainian provocation in which Russia was innocent. Assad never deployed chemical weapons in Syria; that’s a joint effort between terrorists and the White Helmets. Western sanctions have no legitimate justification; they only aim to harm ordinary Russian people. None of these claims are new; we register them in the database every week, ad infinitum. 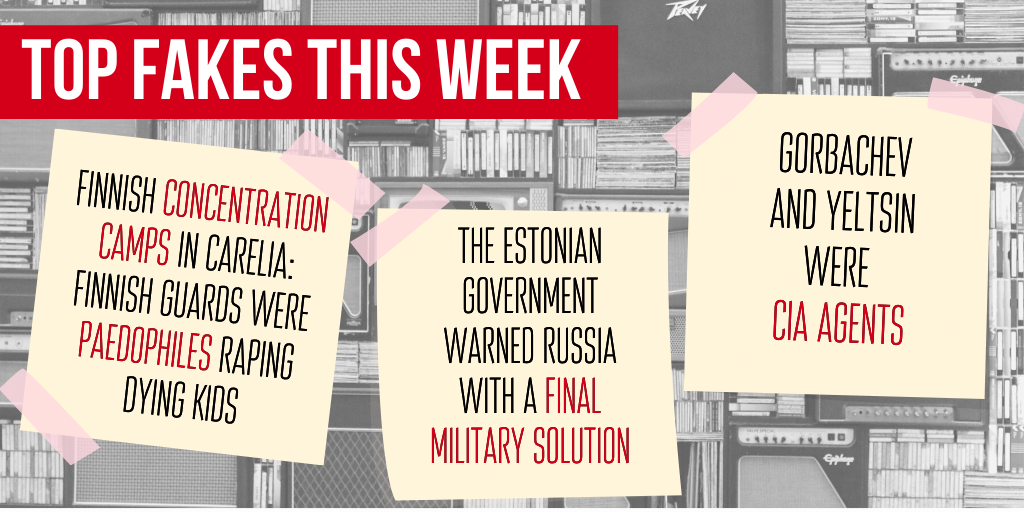 The week’s most extreme cases centred on fascism and paedophilia – two of the Kremlin’s favourite topics for rousing public outrage and hacking audience attention. New “evidence” has emerged about Finnish concentration camps in World War II: the guards were allegedly raping dying children. Russian media also twisted a satirical article, presenting it as a real story, which claimed that the Estonian government has threatened Russia with a “final military solution“.

Genocide was on the table too, with the Council of Europe’s Istanbul Convention – which aims to combat violence against women – accused of being a satanic LGBT plot to destroy the traditional family. Meanwhile, postmodern feminism is to blame for the total emasculation and destruction of men, while women become the all-powerful overlords.

Sensationalist stories aimed at eliciting indignation and outrage are intentionally paired with more subtle stories that distort truth just enough to make one doubt reality, and wonder whether there is in fact a sliver of truth to the pro-Kremlin line. This self-doubt and second-guessing of fact-based reality is one of the primary objectives of the Kremlin’s disinformation campaign. After all, next to outlandish allegations of paedophilia and Nazism, don’t claims about the US actively stoking tensions with Russia and Ukraine’s responsibility to recognise Crimea as Russian sound almost… reasonable? Well, that’s exactly what the Kremlin is betting on. 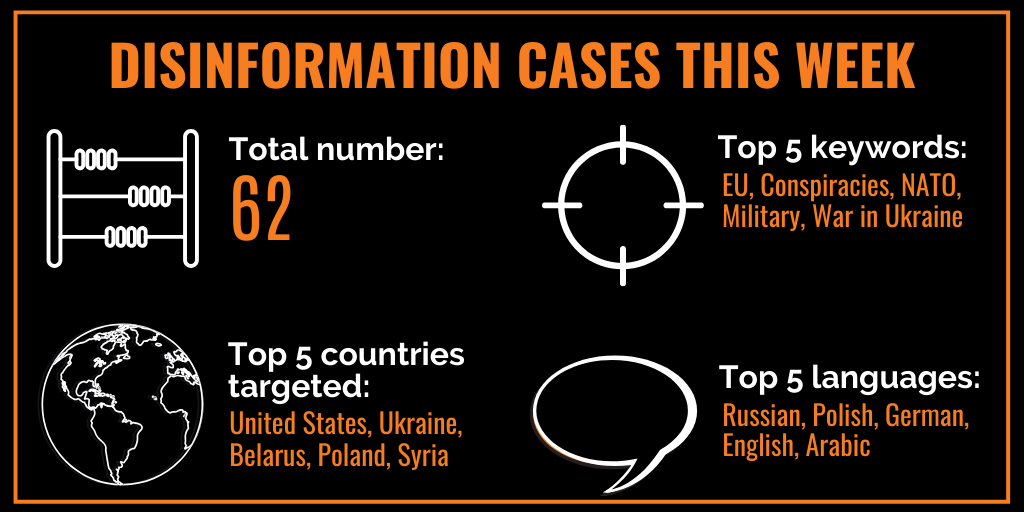 Date
Title
Outlets
Country
Naftogaz of Ukraine blackmails Russia
Ukraine, Russia
In Ukraine, one can be imprisoned for the emblem of the USSR, but do not touch the Nazis
Ukraine
The incident in the Kerch strait was a crime of the Ukrainian military
Ukraine, Russia
Poland and the Baltic countries are the Western world's jackals who can produce a global catastrophe
Poland, Belarus, Baltic states, Russia
Eastern Partnership is about external control and disintegration, Belarus is part of the Russian World
Belarus, Russia
Russia is not a part in the conflict in Donbas
Ukraine, Russia
Belarus faces either normal development under Russia or a forced Polonization and economic devastation
Poland, US, Belarus, Ukraine, Russia
The EU is fed up with Ukraine, it invariably faces a civil war and complete disintegration
Ukraine, Russia
After Brexit, the EU will do its utmost to contribute to the breakup of Great Britain
UK
Ukraine has lost half of its population over the past 30 years
Ukraine
Ukrainian civil war caused by Western-backed 2014 coup in Kyiv
Ukraine, Russia
The Estonian government warned Russia with a final military solution
Estonia
Poland is losing its independence
Iran, Israel, Poland, US
The Istanbul Convention comes to destroy the traditional Armenian family
Armenia
Guerilla warfare and complete disintegration are coming to the US-controlled Ukraine
US, Ukraine
Post-modern feminism in the West is leading to the total destruction of men
White Helmets preparing new chemical provocations in Syria
Syria, Russia
Al Baghdadi’s death was a trick and he will reappear with a different name
Syria, US
The people of Crimea voted for unity with Russia in a democratic ballot
Ukraine, Russia
Gorbachev and Yeltsin were CIA agents, and the US earned trillions of dollars thanks to Kurapaty story
US, Belarus, Russia
Protests against Evo Morales in Bolivia are part of a US-funded coup
US
The Polish politicians care about Ukraine only if it continues harming Russia
Poland, Ukraine
NATO tries to achieve security through very aggressive actions
Russia
The Russophobic Baltics have no chance to overcome cessation of EU funding
Lithuania, Estonia, Russia, Latvia
Al Baghdadi might have been a US agent
Iraq, US
Ukraine is doing everything to disrupt the transit of gas for the benefit of the US
US, Ukraine, Russia
The West dreams of tearing Belarus apart from Russia and to organise a Ukraine-like scenario
Belarus, Ukraine, Russia
Belarus plans to develop an artificial Belarusian identity
Belarus, Russia
Massive cyber-attack in Georgia was orchestrated from the US
Georgia, US
By giving membership to Georgia and Ukraine, NATO will contradict to its earlier guarantees
Georgia, Ukraine
Ukraine was created by Joseph Stalin
Ukraine
NATO plans to take over Russian region
Russia
The US is so deeply divided that civil war and a coup d’état appear to be imminent
US
In Chile, 10 kilograms of bread cost as much as an average monthly salary
Chile
The Moldovan government has approved the construction of US military targets near Transnistria region
Moldova
The goal of Western sanctions is to punish Russians
Germany, Russia
The US government promised Mikhail Gorbachev that the Atlantic Alliance would not expand to the East
USSR, US, Russia
Poland's national strategy is to restore its 1939 borders
Poland, Belarus, Ukraine
Ukraine doesn't need Donbas
Ukraine
NATO justifies its actions with alleged Russian meddling in Ukraine
Ukraine, Russia
Ukraine is blocking the implementation of Steinmeier formula
Ukraine
Bundestag demands expulsion of US troops
Germany, US, Russia
Polish authorities carry out the American will regarding LNG, Ukraine and Belarus
Poland, US, Belarus, Ukraine, Russia
American Armenians lobby for Syrian Armenians to settle in Georgia's Samtskhe-Javakheti region
Georgia, US
Bloodshed loomed in Crimea, but Russia didn't allow it.
Ukraine, Russia
The US President's "Russia affair" proved to be a factless conspiracy theory
US, Russia
Finnish concentration camps in Carelia: Finnish guards were paedophiles raping dying kids
Finland, Russia
It was clear from the very beginning that Ukraine was not going to fulfill the Minsk agreements
Ukraine, Russia
Neither Turkey, nor the US has any interest in building peace in Syria
Syria, Russia
Russian long-range bombers have never realized bombing simulations against other countries
Sweden, US, Ukraine, Russia
US plans to create a Kurdish independent state were thwarted by Russia and Turkey
Turkey, Syria, US, Russia
NATO military exercise near Belarusian border is a threat for Russia
US, Belarus, Russia
The EU is a servant of US geopolitics
US
The EU condemns death penalty in Belarus but does not do so in relation to the US or Japan
Japan, US, Belarus, Russia
Ukraine received its territory from Russia under various circumstances
Ukraine, Russia
Kyiv is sabotaging the peace settlement in Donbas
Ukraine
Ukraine is sabotaging the implementation of Minsk accords and Steinmeier formula in Donbas
Ukraine
US Congress members, Macron accuse Sputnik and RT of election interference with no evidence
France, US
ISIS has been supported by US, British, French and Israeli intelligence services in order to demolish Syria
UK, Israel, France, Syria, US
The Russian army doesn't deliberately target civilians, unlike the US
Syria, Russia
Serbian media uncritically repeat false Western media reports on Russia
Serbia, Russia
Western media distort election results to paint false pictures of “loser Putin” and “hero Navalny”
Serbia, Russia
France took hostiles measures against Russia while Skripal, MH17 and Syria cases are not clear
France, Russia