When tabloid journalism is the only game in town 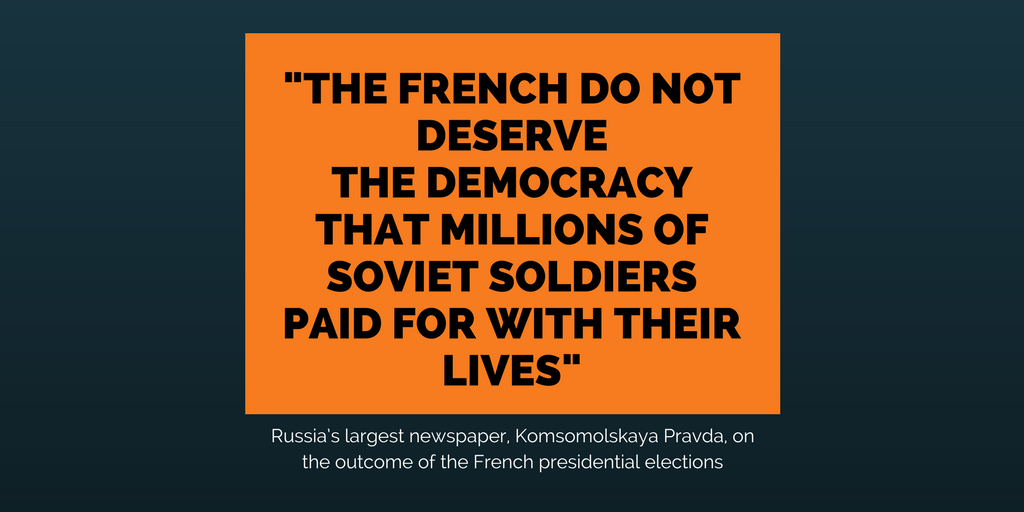 “They [the French] have to go through globalist hell. They do not deserve the democracy that millions of Soviet soldiers paid for with their lives”. This is how Russia’s largest newspaper, the Kremlin-loyal daily Komsomolskaya Pravda (KP) commented on the outcome of the French presidential elections, in a report written by a staff journalist. The article’s headline said that the French “deserved” Mr. Macron and referred to him as “a psychopath who hates France” (for a more thorough account of KP’s article, see The Independent’s piece on it). The language used by KP comes after a series of negative articles about Emmanuel Macron in pro-Kremlin media, which were partly based on speculation about his sexual orientation, his past as a banker and his alleged ties to the United States. We described the developments in the run-up to the first round of the elections (see our stories from February and March). During the interval between the first and the second round, the narrative towards Mr. Macron became increasingly aggressive.

A report on 21 April by Zvezda, the Russian Defence Ministry’s outlet, borrowed Marine Le Pen’s line about Macron being a “weakling” and “hysterical”. KP ran the headline: “The private life of France’s Presidential candidates: Le Pen is divorced, Macron has a secret husband”. According to KP, Mr Macron owes his popularity to “the exotic biography of a young politician who managed to please women of age, descendants of migrants, and the international financial community”. In lieu of evidence supporting the rumours about the candidate’s “secret husband”, the paper simply quotes a commentator saying that ”some French people conclude that he is gay”.

The de facto monopoly held by pro-Kremlin media in Russia means that many Russians will not see alternative accounts of politics in EU Member States. As we reported, talk show host Dmitry Kiselev relayed the rumours about Mr Macron’s alleged homosexuality already in February. With little access to media that challenge these stories, or make the case that they are irrelevant, these rumours gain importance in forming public opinion in Russia. With 74% of Russians believing that homosexuality should not be accepted by society (see the poll by the Pew Research Centre), the use of this rumour carries not only a sensationalist, but a directly negative message about Emmanuel Macron.