Who Is Afraid Of Russophobia? 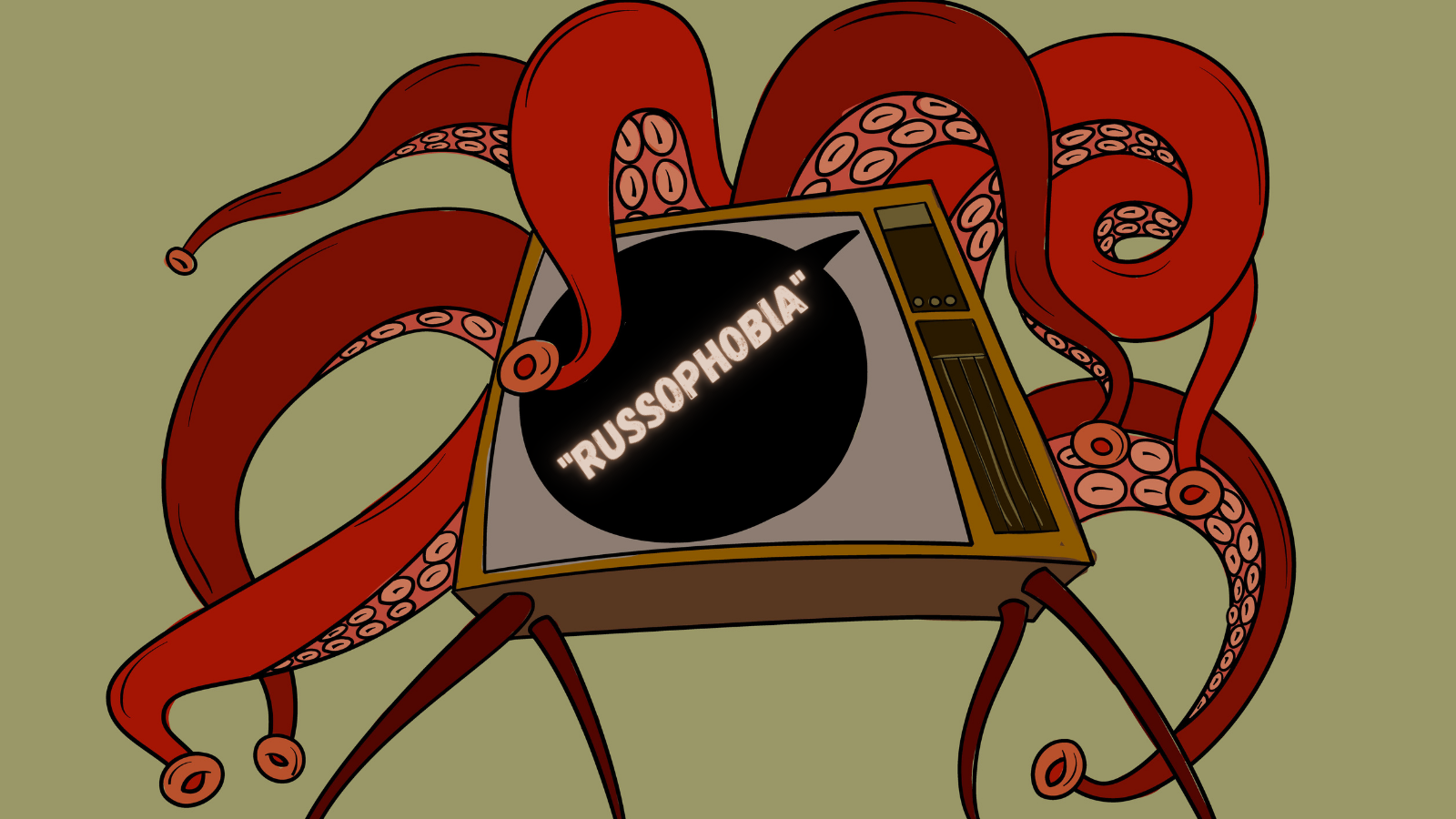 Life is tough when the whole world is pitted against you, or when you think that it is. This week, the disinformation reflects this mood, radiated by the pro-Kremlin media.

Let us begin with the coverage of the Davos Forum. According to pro-Kremlin media, Western media silenced the speech of President Putin, although it was covered by the FT, The Washington Post, Time Magazine, Bloomberg, Deutsche Welle, South China Morning Post, The Moscow Times, Le Monde, El País, Corriere Della Sera and Süddeutsche Zeitung, to name a few. Furthermore, the World Economic Forum and Reuters streamed it live.

The claim that Western criticism of Russia is due to Russophobia, also echoed the-world-against-Russia-sentiment. This is a classic move, diverging attention from uncomfortable questions for the Kremlin. Side note: the word Russophobia figures 614 times in our database. Clearly, the pro-Kremlin media ecosystem aims to spread fear based on the West’s – alleged – fear.

Uncomfortable questions about the treatment Alexei Navalny receives from his own government are deflected with many false stories connecting him with alleged Western interference. For instance, the West fabricated the Navalny poisoning story to maintain a myth of Russian aggression. In a more extravagant fashion, Navalny is a puppet of three (!) Western intelligence agencies and a “pocket president”, trained by globalists to replace Putin. Words can hurt. Therefore, Western criticism of the Navalny case is considered by pro-Kremlin media as interference; the same message also claims Russia does not meddle in other countries’ affairs.

According to pro-Kremlin disinformation, even the ruling of the European Court of Human Rights demanding that Russia releases Navalny is political interference. According to Rossiya 24, this sort of meddling confirms that the EU is rallying behind its agent, and is prepared to do so without citing a single legal argument. Wrong on many levels. On the most basic level, the EHCR is not even an institution of the European Union, but of the Council of Europe, of which the Russian Federation is a member, by the way, with all corresponding rights and responsibilities. 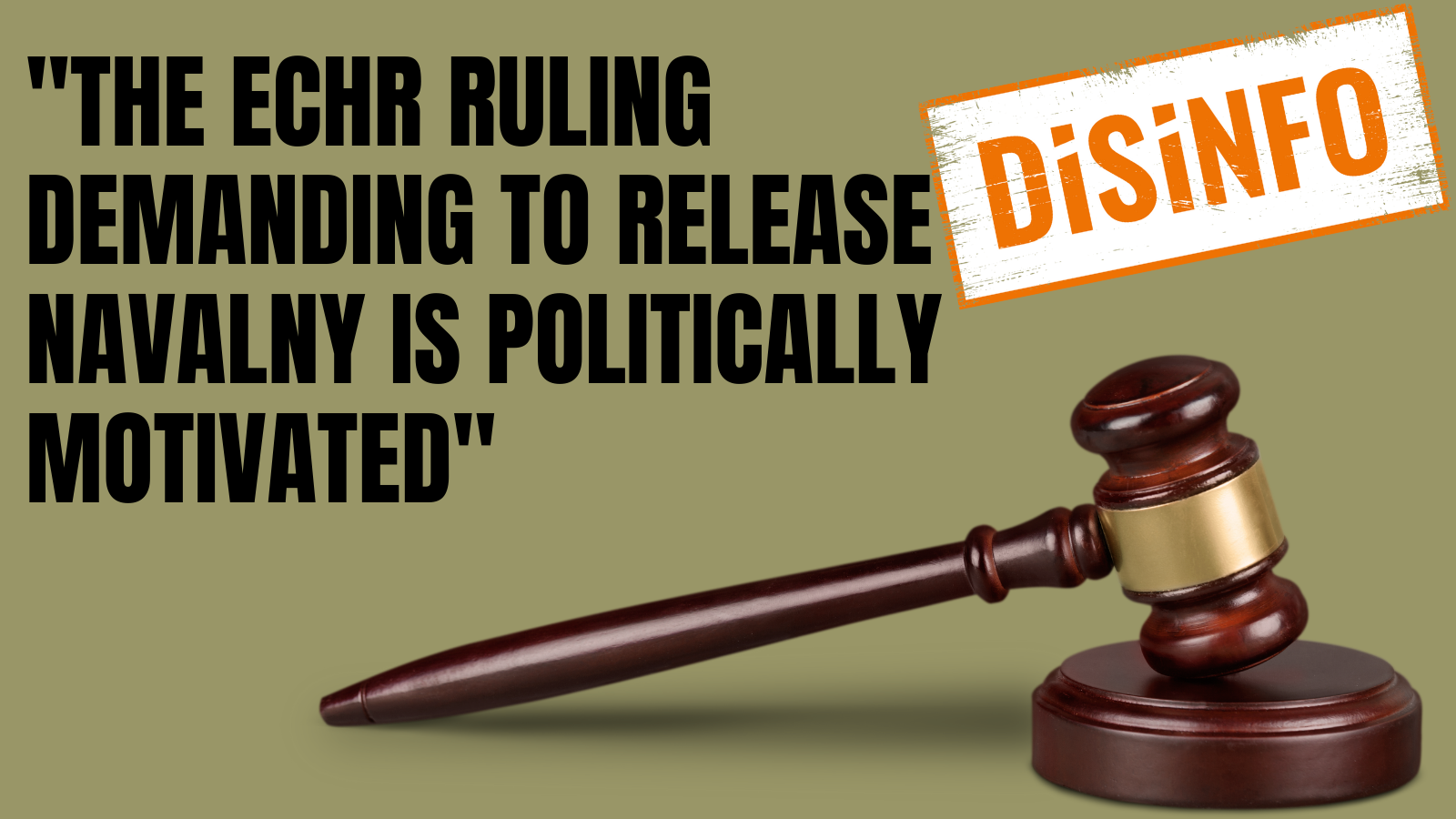 Talking about interference, according to the pro-Kremlin media ecosystem, it was the West who interfered in Ukraine in 2014. Western countries provoked a coup in Ukraine after the refusal to sign the unfavourable Association Agreement. The West’s goal: to establish external control in Ukraine. Its instrument: revolution. According to pro-Kremlin disinformation, this worked. Just look: Ukraine nowadays is clearly under control of the West. In fact, Ukraine is a sovereign state, and a close partner with the EU, independently building its future.

These narratives about interference and control make one wonder about definitions. What is interference or control in the Kremlin’s book? If we remember correctly, it was Russia, who, not so long ago, violated the sovereignty of its neighbours, Georgia and Ukraine, and continues to breach international law. 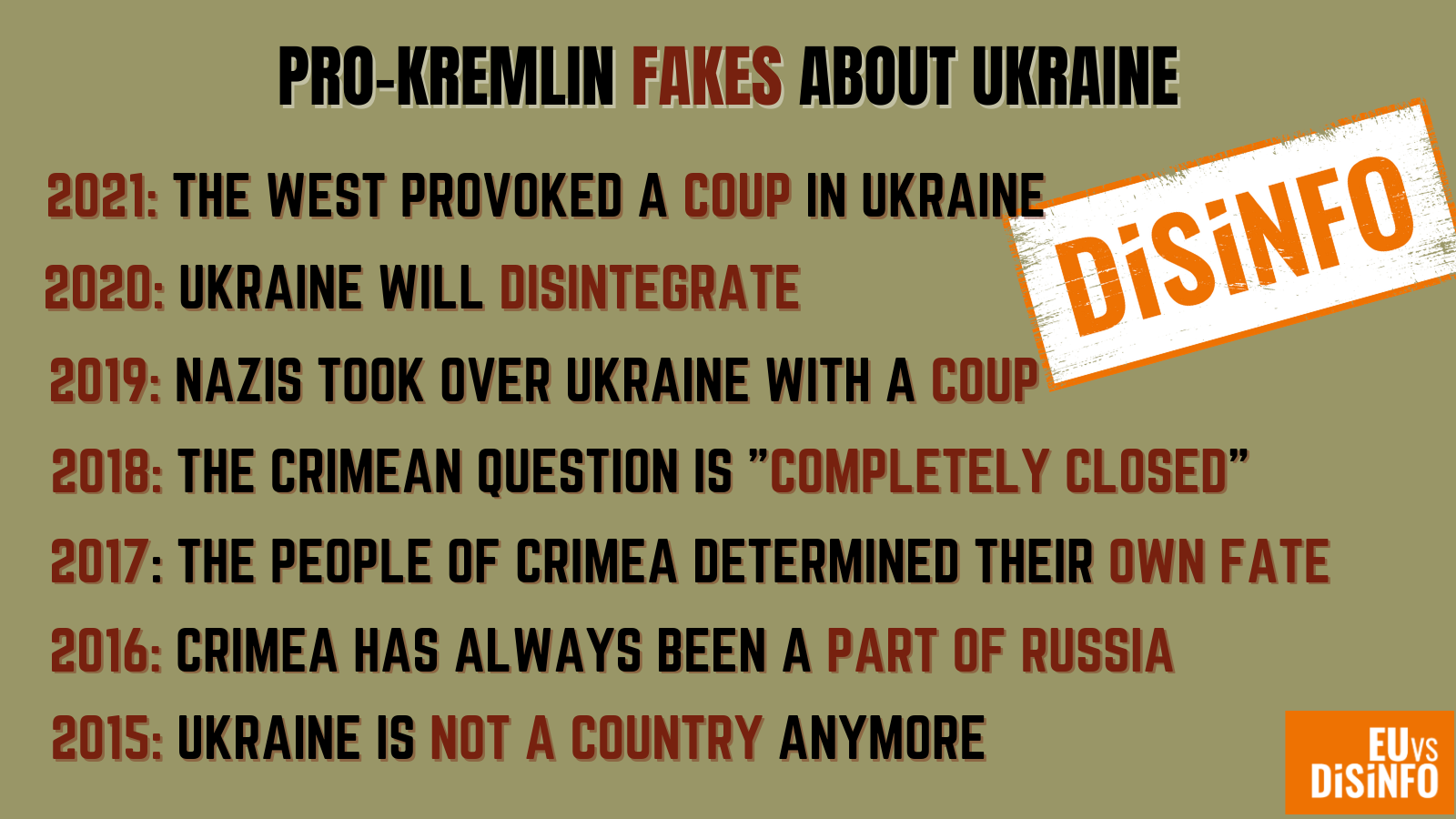 Control is an important word in the disinformation vocabulary. In many stories, there is a malicious agent controlling developments behind the scenes. This is no different in this week’s disinformation focusing on the EU. For example, we spotted a case claiming that Europe’s geopolitical game is controlled by the United States. According to pro-Kremlin disinformation, EU officials are guided by their own corporate interests, coupled with persistent wishes from Washington.

The West, or specifically the US, is also exercising control through smaller countries. For example, we have Russophobic Poland, controlled by Anglo-Saxons, planning to occupy Belarus. There is also Latvia provoking a confrontation with Moscow in order to get economic support from the West.

Sanctions is a Hot Topic

Some of the EU-related disinformation focused on sanctions. This is not new. Until last week, there were 477 cases on sanctions in our database, and 33 in 2021 already. For example, the first narrative on sanctions we covered, back in ’15, claimed that the USA persuaded the EU to impose sanctions, combining the sanctions theme with the theme of Western control.

This week we spotted a case falsely claiming the EU lost more from sanctions than Russia. Research shows that the opposite true. Although the sanctions resulted in a cumulative export loss to Russia, about 0.2% of the EU’s GDP, they imposed a burden on Russia’s economic development since 2014. This effect probably operates by depressing foreign trade and foreign capital flows into Russia, although Russia’s own counter-sanctions have had the most impact on Russian people’s welfare. The Washington Post was unequivocal: “The sanctions have stunted Russian economic growth and sapped the urban middle class of wealth and opportunity.”

In another case, the economic effects of the sanctions are not contested, but they are qualified as an illegal, hypocritical and childish reaction of the EU. In reality, however, the EU adopted them as a reaction to the annexation of Crimea in 2014 and the deliberate destabilisation of Ukraine. They are intended to bring about a change in policy or activity by targeting non-EU countries, as well as entities and individuals, responsible for the malign behaviour at stake.

Most people see sanctions as means to restrict export. In pro-Kremlin eyes however, the West use sanctions, together with Ukraine, to export something – a colour revolution to Belarus.

As the world is following the race for vaccines, the disinformation media circuit tries to sow division over the jab. For example, we noticed a case claiming the EU High Representative, Josep Borrell couldn’t criticise Russia because Europe needs Sputnik V. Yet, at the same time, the West ignores Sputnik V and tries to complicate the process of the Russian vaccine entering the international market.

Just to be clear, the European Union is not against the Russian produced vaccine and does not ignore it. For any medicine to be marketed and made available to patients in the EU, it must first be authorized by the European Medicines Agency (EMA). According to EMA’s latest statements it “has to date not received an application for a rolling review or a marketing authorisation for the [Sputnik V] vaccine”. 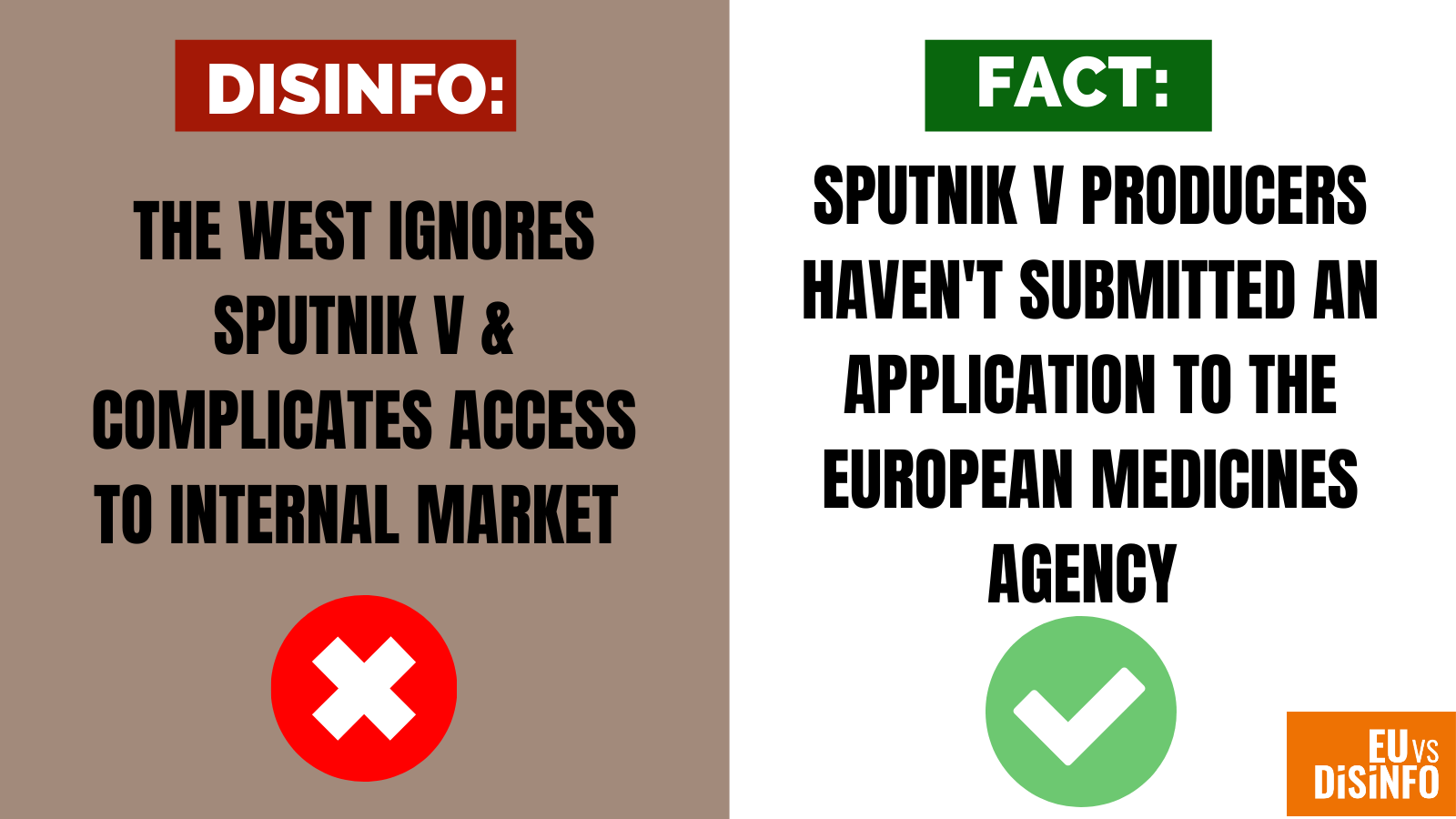 This is disinformation about disinformation. In reality, our method is not denial but diagnosis. We have a method to establish what is disinformation. In identifying cases, we focus on messages that provide a partial, distorted, or false depiction of fact-based reality. We use two criteria to determine if a disinformation message should be included in the database: 1) the message is verifiably false or misleading, according to the publicly available factual evidence and 2) the message originates in a Kremlin-funded and state-controlled media outlet or other information source that has clear links to the Russian Federation.

In the end, we are in the comfortable position to be able to say, do not trust our authority, verify the cases yourself. 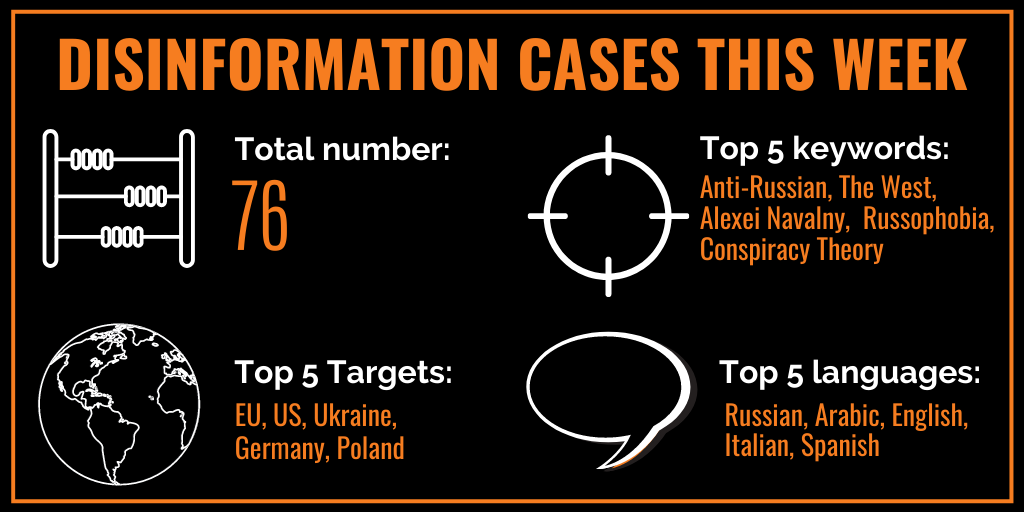