Who is Darth Putin? 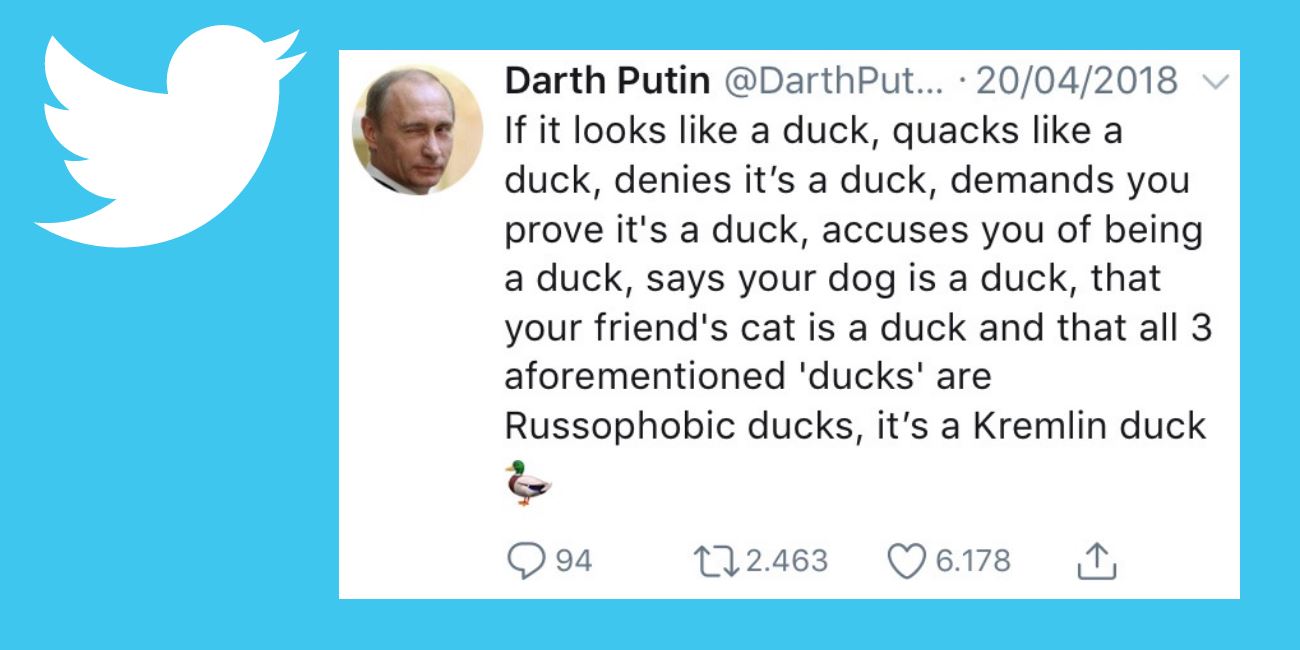 Disinformation can sometimes be fun – especially when the more awkward attempts to spread it are unmasked. We do our best to illustrate this point with a weekly fun story on the EUvsDisinfo website.

But some go further than highlighting embarrassing moments. One genre that has gained particular popularity is that of the parody accounts, which communicate political satire on social media. Our favourite is “Darth Putin” on Twitter.

The Darth Putin tweet used as illustration above has so far gained an impressive almost 2,500 retweets, and that success is well-deserved; in fact, Darth Putin manages in just one tweet to highlight a number of  key points about the pro-Kremlin disinformation campaign, which we have tried to describe in a whole series of feature articles in the course of the past year:

RT (Russia Today) does little to hide its true nature: chief editor Margarita Simonyan is on the record as saying that RT is needed “for about the same reason as why the country needs a Defense Ministry”, and that RT is capable of “conducting information war against the whole Western world,” using “the information weapon”.

Pro-Kremlin media systematically repeat the political lines they receive from the Kremlin in the form of weekly instructions.

Even when evidence is piling up, the Kremlin’s media and communicators will continue to deny responsibility, as we have e.g. seen in the case of the downing of Malaysian Airways Flight MH17 and in the Salisbury poisoning incident.

“demands you prove it’s a duck,”

As easy it is to spread a lie, as difficult it can be to prove that the lie is a lie. Read about how a persistent BBC reporter on the ground in eastern Ukraine successfully unmasked a particularly morbid piece of pro-Kremlin disinformation.

“accuses you of being a duck, says your dog is a duck, that your friend’s cat is a duck”

One of the most frequently used defensive lines in pro-Kremlin disinformation is to turn tables and claim that everybody else is guilty of what the pro-Kremlin side is criticised for doing. The trick is known as “whataboutism”.

“and that all 3 aforementioned ‘ducks’ are Russophobic ducks,”

When the international community expresses concerns over the Kremlin’s policies and actions, pro-Kremlin media and communicators will usually say that the criticism is simply a result of “Russophobia”.

Quack-quack! Last autumn the pro-Kremlin disinformation campaign was obsessed with the idea that yellow plastic ducks could become a weapon in the hands of the opposition.

Who is behind the popular Darth Putin parody account remains a well-kept secret; but we hope (s)he will continue to provide entertaining  insight into how the disinformation machinery works.