Skip to main content
Read this article in Русский
News and analysis
November 18, 2019

Who's Afraid of the Brown Stink Bug? 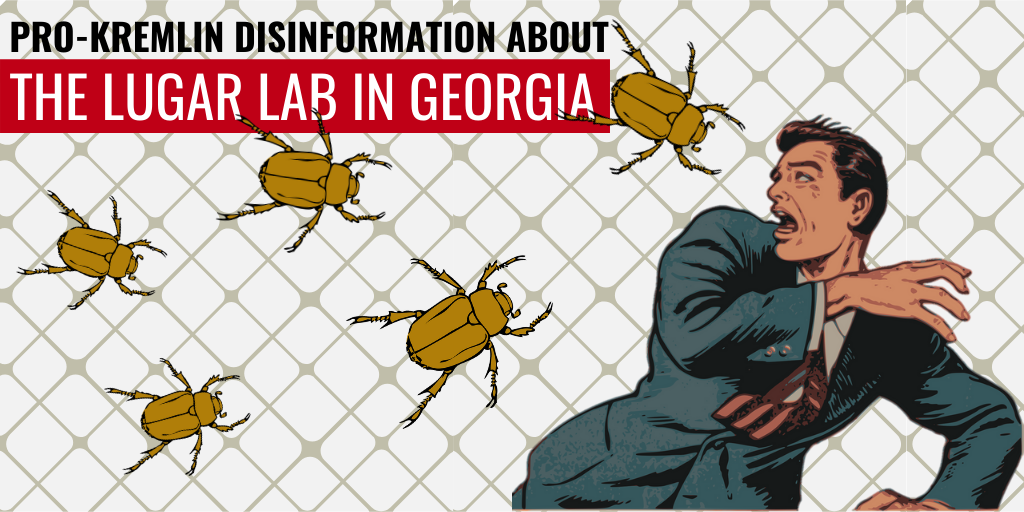 Measles and swine flu epidemics, bioweapons, lethal experiments on people… – Georgian Lugar Lab has been subject of a massive disinformation campaign. What makes pro-Kremlin actors so eager to use one laboratory to spread so many infectious messages? A very well-known piece of wisdom of all media in the world is: keep your stories close to the people, and you will keep it interesting. For most of us, regardless of our status or the place we live in, stories that keep us interested refer to health and safety of our loved ones and ourselves; and with issues touching our personal sphere, it’s difficult not to mix the rational arguments with an emotional perspective. This is why stories about children saved from a fire or an epidemic, even in regions far away, get the most clicks, views and shares. This is also one of the reasons why the discussion around vaccines is so heated and thoroughly covered by the media – because directly or indirectly, it concerns us all. Disinforming outlets know this very well, too, and are trying to exploit the emotions hidden behind these stories to push their own narratives. And this is where a story of a disinformation attack on the Lugar Lab begins. Have you ever heard of Lugar Lab? Its official name is the Central Public Health Reference Laboratory. It was opened in 2011 in Tbilisi, in partnership between Georgia and the US, with the latter financing the construction of the lab. The unofficial name comes from Richard Lugar, US senator involved in this project. The lab’s aim is to detect dangerous infectious diseases in human beings and animals; to conduct epidemiological research; and to combat the global spread of diseases. But what does that have to do with disinformation? A lot. It’s been years since pro-Kremlin outlets have started their campaign against this laboratory, by using one of the most universal human emotions – fear. A look at narratives around the Lugar Lab says a lot about the tactics of the disinformation machinery. Some messages focus on personal concerns; others are reporting from the global politics angle. To top all that, conspiracy theories are heavily exploited too. Moreover, different narratives are emphasized for Georgian-speaking and Russian-speaking audiences, uncovering how pro-Kremlin outlets are trying to tailor their messages, picking what may be the most suitable. Getting personal in Georgia In the period between 1 January and 31 October 2019 in four Georgian-speaking outlets with previous record of spreading pro-Kremlin disinformation (Sputnik Georgia (in Georgian); Georgia and the World; Alia and Saqinform), we found 23 articles devoted to the Lugar Lab. Not all of them comprised disinformation. The ones that did were mostly human interest stories. They claimed, for example, that in the residential area around the Lugar Lab a higher number of oncological diseases was recorded. A few persons were shown by the media – the same ones in different footages – complaining about health conditions in the vicinity. Were this case not scary enough, then a more universal threat was served in another popular message: H1N1 (swine flu) virus, measles and other diseases were allegedly spread by the Lugar Lab. This could make more Georgian-speakers afraid of being infected, as the viruses know no borders and can spread faster than disinformation messages. The personnel of the lab became infected too, but Georgian authorities covered it up, Alia and Georgia and the Word claimed. But where did all those viruses come from? Most probably, the US, Georgian readers ‘’found out’’ from pro-Kremlin outlets. Apparently, the US planted them in the Lugar Lab in an attempt use them as biological warfare; and given the proximity of the lab to the Tbilisi airport, they may as well be transporting bombs through this channel, while they were at it. Beyond the scope of the four examined outlets, the sensitive issue of vaccination was also used to push pro-Kremlin agenda; the claim in one of the articles said that the vaccines in Georgia must come from the Lugar Lab, hence they can’t be trusted. The solution would be to use Russian vaccines or not get vaccinated at all. These narratives were not supported by any evidence, data or official statements. But it didn’t stop Facebook users from commenting and sharing them; one of the articles with the biggest numbers of interactions (1959) was the story of swine flu being spread only in the lab’s vicinity. 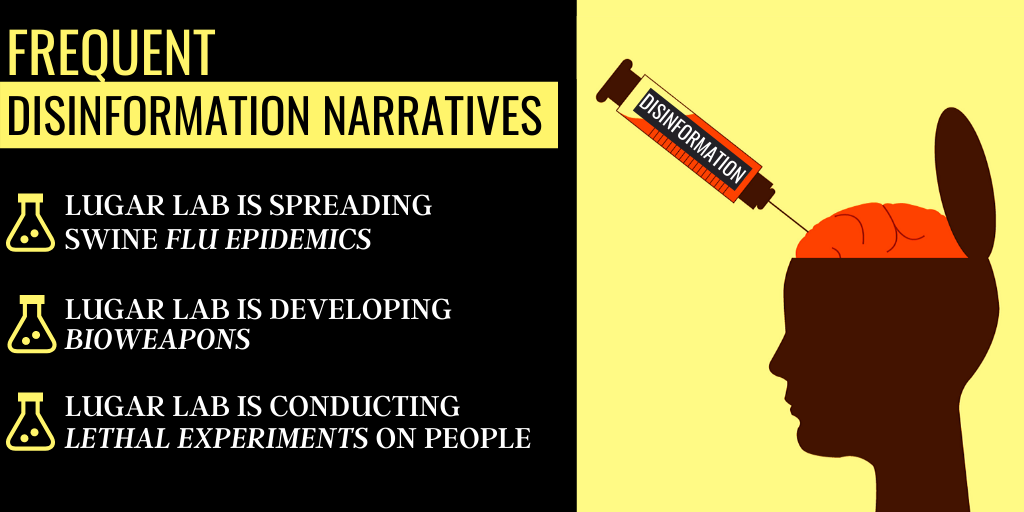 Talking geopolitics in Russian Figures for the Georgian readership of these stories are not substantial, and it doesn’t seem to be the biggest battlefield for pro-Kremlin disinformation. The cannons are put to work in the Russian-speaking (dis)information sphere. In the same period between 1 January and 31 October 2019 we found 489 articles on 115 websites devoted to the Lugar Lab in Russian language. Over 80% of them were the websites of the disinformation outlets recorded in the EUvsDisinfo database (such as RIA FAN, Eurasia Daily, Tsargrad TV, Sputnik Georgia (in Russian), Sputnik Armenia (in Russian), among others). Similarly to the content in Georgian, a few of the common narratives in Russian were playing on the human fear and health concerns, accusing the Lugar Lab of spreading swine flu, measles and other infectious diseases. Messages about the US’s involvement in the whole undertaking of infecting Georgians and neighbouring nations as well as bringing bioweapons to Georgia were also present and made it to the top ten of most common narratives this year. One overarching disinformation narrative – “Russia encircled by the evil West” – was tailored solely to the Russian-speaking audience. Russia’s fear of the Lugar Lab and its mysterious activities is justified, this narrative said, as there are many American labs across the world, including at Russia’s borders, and nobody but the US has control over them. They may as well producebioweapons, regular weapons and viruses there, and experiment on people who end up dying (that’s another narrative in the top ten narratives). And neither official declarations about the lab’s mission nor the alleged openness of the lab to foreign visitors can convince pro-Kremlin media that it is otherwise. And to top all that, conspiracy theories were an opportunity not to be missed in this regard; and so, the Russian-speaking readers could “find out” that the Slavs are used as laboratory mice, subject to lethal experiments and, possibly, extermination. Those carrying about the nature and the planet could choose between narratives about brown stink bugs, GMO mosquitos and flying cockroaches, created by the Lugar Lab to destroy agriculture and contaminate food. Questioning political choices It’s fascinating how just one laboratory can be used by the disinformation machinery to support pro-Kremlin agenda in so many ways, from health threats to questioning Georgia’s relations with the West. But even the most creative minds are getting exhausted. This year’s Lugar Lab stories are not new; they have appeared in pro-Kremlin media before and were met with a firm reaction. Georgian fact checkers community, including FactCheck and Myth Detector, has been following the evolution of narratives around the Lugar Lab and confronting false messages with facts. It is also thanks to them that we saw the most twisted attempts at using the Lugar Lab conspiracy theories to spread other narratives on the Kremlin’s agenda, such as the poisoning of Sergei Skripal, and to push it to the international information space. What is behind pro-Kremlin outlets’ effort to make up convincingly scary (though not scarily convincing) narratives? The overall aim to question Georgian statehood and sovereignty, as well as its Western aspirations. It may seem like a far-fetched strategy, but under heavy disinformation campaign, the path from being concerned of your health to distrusting public institutions, from looking at the facts to thinking with emotions, may get really short. But the facts are there, available now, for everyone. And so is the story of manipulation. We used CrowdTangle and BrandWatch to gather data from the social media platforms.