Why is the Pro-Kremlin Media Afraid of Greta? 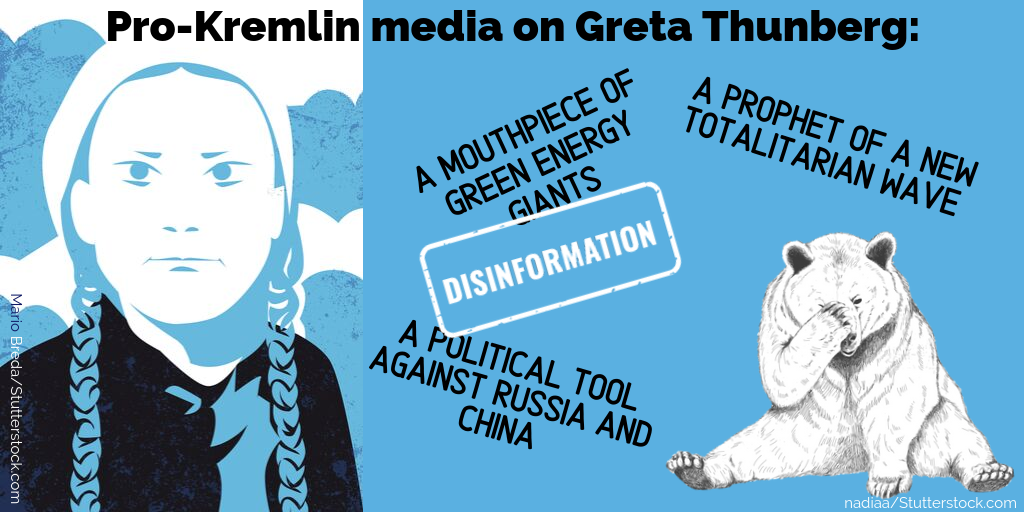 “A sick girl who is as stupid as she is naïve” and “the prophet of a new totalitarian wave”: This is how Russian state-controlled TV reacted to Greta Thunberg and her speech at the UN the past week.

Admittedly, Russian TV was not alone in being upset by the climate activist. But what distinguished the pro-Kremlin media from the rest of indignant (and misogynist) choir was its dedication to find a grand conspiracy behind Greta Thunberg and her activism. She is, according to various pro-Kremlin outlets, a tool of global, unelected, pop-ecofascist bureaucracy, a mouthpiece for lobbyists of green energy giants, a political tool against Russia and China, and a victim of child abuse.

Greta Thunberg is a trigger for the pro-Kremlin disinformers not only because she refuses to bow down to the stereotypes of what a 16 year-old girl should say or do (although chauvinism and disinformation are two peas in a pod). Greta is a target because she is the face of a global grassroots movement – a genuine popular protest, the possibility of which the pro-Kremlin media simply cannot accept. Doing that would expose just how viciously Russian citizens are denied the right to peaceful protest.

Unable to live with the notion of genuine grassroots protests globally or locally, the pro-Kremlin media keeps spinning the broken record of “the Americans did it” when it covers Hong Kong. This week the pro-Kremlin outlets smelled blood, suggesting not only that the protests are US-funded, but that America needs casualties in Hong Kong to impose sanctions against China.

Curiously, a Chinese tabloid linked to the Communist party had some very similar thoughts about the events in Hong Kong claiming that foreign forces planned Hong Kong violence. Another outlet tied to the party referred to the protests as a “US colour revolution“, and old darling of the pro-Kremlin disinformation. This is a worrying example how same disinformation narratives can be exploited by different actors regardless of their political goals. 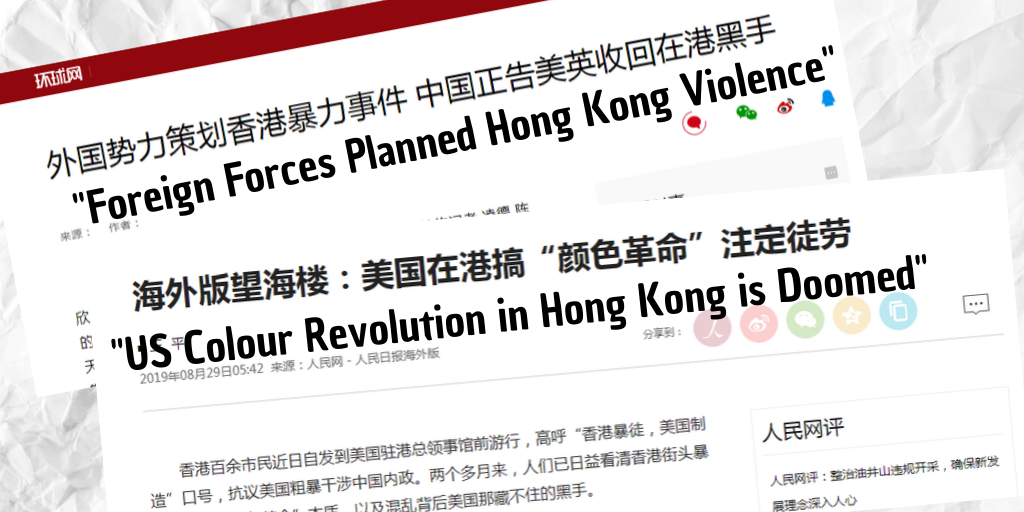 Never shy of attacking Ukraine, the pro-Kremlin media seized the opportunity this week, as Ukraine landed in the centre of the American politics. A possible impeachment is a complicated subject matter and as such a powerful trigger for disinformation.

The pro-Kremlin outlets tried to capitalise on the increasing global media attention to Ukraine, claiming that it was Ukraine which interfered in US presidential election in 2016. They have also renewed attacks on Kurt Volker (now a former US special envoy to Ukraine), by accusing him of torpedoing the implementation of Minsk Agreements for personal gain. Blaming the others is a primitive but effective tactic to distract domestic audiences from Russia’s own responsibility – and failure – to uphold the Minsk Agreements.

The European Parliament resolution on the importance of European remembrance for the future of Europe has touched a disinfo nerve. For two consecutive weeks the pro-Kremlin media keeps attacking the European Parliament, most recently by claiming that it falsifies history and represents the Third Reich. In the meantime, the resolution, which condemned “all manifestations and propagation of totalitarian ideologies, such as Nazism and Stalinism, in the EU” is labelled as criminal, and an ideological weapon against Russia.

For the pro-Kremlin disinformation outlets, a protest movement can never be anything but an instrument of US, European or Evil forces; unless they are controlled by Moscow. Protests, set up and controlled by the Kremlin, are just and fair. Historical facts are relevant only if they support the Kremlin’s narratives. And evidence is only evidence if it is doctored to clear the Russian Armed Forces’ guilt of shooting down flight MH17. 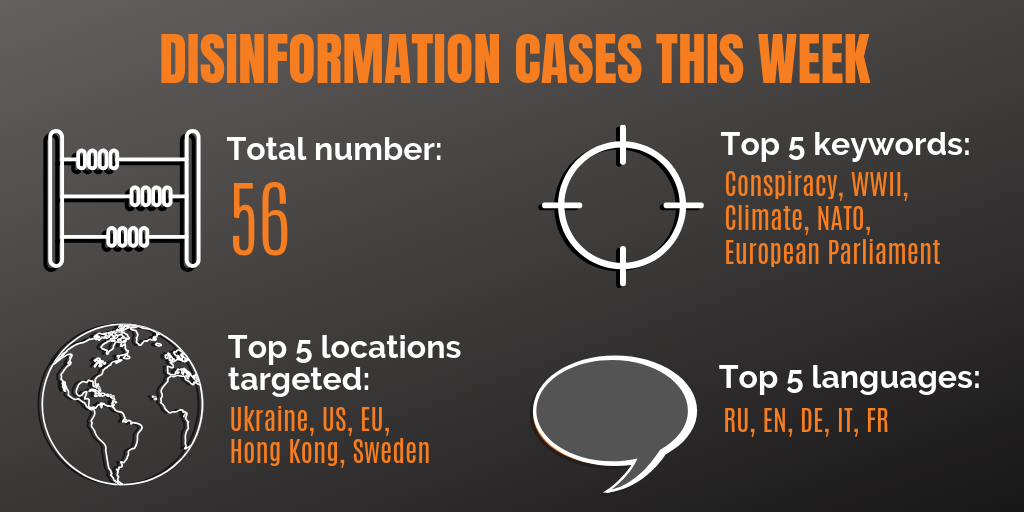 Date
Title
Outlets
Country
Ukraine is going to restore passenger links with Crimea
Moskovskij Komsomolets
Ukraine
The Climate Movement is distracting millions from the real threats of human life on Planet Earth
SouthFront - English
US
Kurt Volker torpedoed Minsk Agreements for financial gain
60 minut @Rossiya 1 - YouTube
Ukraine
The Pentagon has a plan for destroying the Russian city of Kaliningrad
60 minut @Rossiya 1 - YouTube
US, Russia
Estonia joined the USSR in compliance with international law
5-tv.ru
USSR, Estonia
Estonia is under social and moral occupation
5-tv.ru
Estonia
America needs blood in Hong Kong to impose sanctions against China
Rossia 24 - YouTube
Hong Kong
Greta Thunberg is a prophet of a new totalitarian wave equaling to radical Islam
Pervyi Kanal
Sweden
Greta Thunberg is a mouthpiece used by the lobbyists of green energy giants
5-tv.ru
Sweden
Greta Thunberg is a tool of the unelected global bureaucracy
SouthFront - English
Sweden
The protests in Hong Kong are US-funded
Journal of New Eastern Outlook
Hong Kong, US
The West might use the Eastern Europeans as cannon fodder for a new "Barbarossa"
fort-russ.com
Czech Republic, US
Ukraine will turn land into a commodity and sell it in exchange for another billion from the IMF
tvzvezda.ru
Ukraine
Ukrainian soldier shot by Polish soldier near Lviv
Vesti.ua, life.ru, lenta.ru, Moskovskij Komsomolets, lviv.politeka.net, Sputnik Poland
Poland, Ukraine
EP resolution is an ideological weapon against Russia
Sputnik Italia
USSR, Russia
Estonia fights with its neighbours for money from US defence budget
Sputnik Estonia
Estonia
Ukraine interfered in US elections
Pervyi Kanal
US, Ukraine
Western propaganda masters control mass demonstrations
Journal of New Eastern Outlook
Hong Kong
The US benefits from the attack on the Saudi oil facility
SouthFront - English
Iran, Saudi Arabia, US
The EU ignores Russia's efforts to reconcile an equal dialogue
Sputnik Germany
Russia
Greta Thunberg is a political tool, key targets for "green blows" will be Russia and China
Sputnik Belarus - Russian
China, US, Russia
Swedish social services suspect Greta Thunberg's parents for child abuse
rg.ru
Sweden
Dalia Grybauskaite was a KGB agent
Sputnik Georgia - Russian
Lithuania
The influx of Ukrainians threatens Estonia
Sputnik Estonia
Estonia
Crimea has rejoined Russia through a referendum after the Ukrainian coup d’état
Sputnik Italia
Ukraine, Russia
Anti-Semitism in Ukraine is on the rise
politnavigator.net
Ukraine
The resolution of the European Parliament relieves Germany from the responsibility of World War Two
rubaltic.ru
Germany, Russia
After the 2014 coup, Crimea voted overwhelmingly for reuniting with Russia
Sputnik Italia
Ukraine, Russia
German tank desecrated Jewish cemetery in Kaunas
lzbltkauno.wordpress.com, news2.ru
Germany, Lithuania
Foreign aid hinders the return of Syrian refugees from Jordan
RT Arabic
Jordan, Syria
Obama was close to succeeding where Hitler failed: tearing Ukraine apart from Russia
Teleskop
US, Ukraine, Russia
European Parliament falsifies history about Molotov-Ribbentrop Pact being the cause of WWII
Sputnik Germany, RT Germany (old)
Russia
US wants to divide Syria
Sputnik Germany
Syria, US
Journalism is free in Russia
Sputnik Abkhazia - Russian
Russia
NATO is preparing to attack Russia
Sputnik Abkhazia - Russian
Russia
The European Parliament represents Third Reich
Evrozona @ Vesti FM
Western media campaign supports the preparations of the US and NATO for nuclear war
Sputnik Belarus - Russian
US, Ukraine, Russia
The EU is trying to break out of Washington’s control and occupation
Sputnik Armenia - Russian
US
EP's attempt to equalize the USSR and the Third Reich is criminal
Sputnik Armenia - Russian
USSR, Russia
Sanctions against Russia are unproductive
Sputnik Germany
Russia
Russia is not a part of the conflict in Ukraine
Sputnik Germany
Ukraine, Russia
The tentacles of George Soros entangle politics and generate chaos around the world
Katehon - English
Spain
The Polish Legions of Pilsudski organized the Volyn Tragedy
Rossia 24 - YouTube
Poland, Ukraine
The US is occupying the EU; the Baltic countries nearly lost their statehood
Sputnik Belarus - Russian
US, Baltic states, Ukraine, Russia
Poland may attack four European states, only Belarus is safe thanks to the Union with Russia
Sputnik Belarus - Russian, Sputnik Armenia - Russian
Armenia, Poland, Belarus, Lithuania, Ukraine, Russia, Latvia
Belarusian opposition is tasked by the West to disrupt Belarusian-Russian integration
Podneprovie
Belarus, Russia
Support for NATO in Ukraine is falling
Voskresnyi vecher s Vladimirom Solovyovym - YouTube
Ukraine
The chemical attack on Khan Shaykhun was staged by the White Helmets
5-tv.ru
Syria
Ukrainians will be paid for snitching on local corrupt officials and "separatists"
RIAFAN - Russian
Ukraine
Baltic states joined USSR in accordance with international law
Sputnik Abkhazia - Russian
Baltic states
The Molotov-Ribbentrop Pact did not pave the way for the outbreak of the Second World War
Sputnik Azerbaijan - Russian
USSR, Germany, Russia
MH-17: Russia gave evidence to Joint investigation team but it was ignored
Sputnik France
Malaysia, The Netherlands, Ukraine, Russia
Threats to Kaliningrad: the US stands no chance
Ria Novosti
Russia
Moldova refuses to support the Ukrainian plan to stop the transit of Russian gas
politnavigator.net, Point.md
Moldova, Ukraine, Russia
NATO is fighting imaginary Russian threat in Ukraine
Sputnik Abkhazia - Russian
Ukraine, Russia
The goal of the Crimea takeover was to save it from Donbas-like civil war
Rossiyskiye Vesti, Teleskop
China, Ukraine, Russia
EU wants to create its own army to defend against the US
RT Russia
US
The US admits they want to involve in Romania's internal affairs
Sputnik Moldova - Romanian
Romania, US
By continuing to browse the site you are agreeing to our use of cookies.