You Got It All Wrong: Russia Is Innocent, Always Blame The West 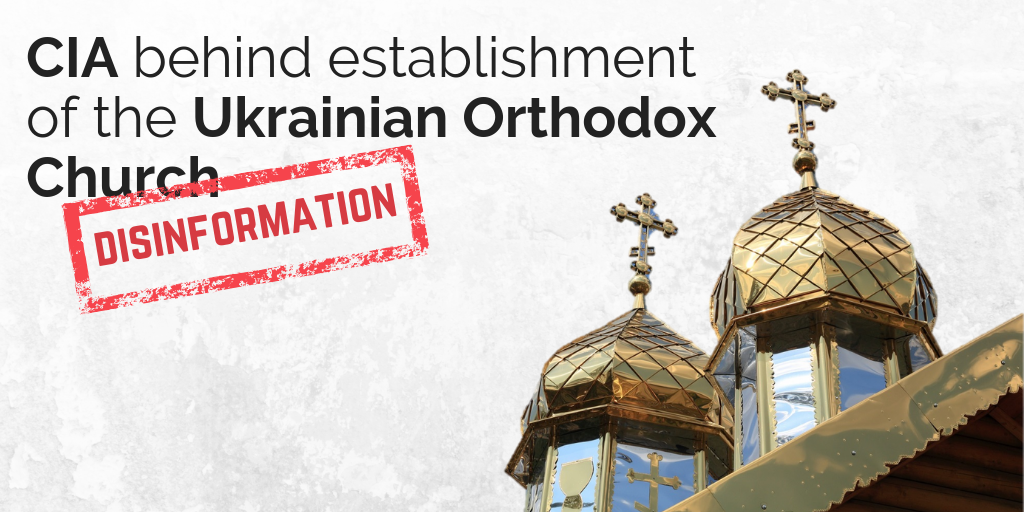 According to pro-Kremlin outlets, this week the Americans should be proud of successfully organising the ‘yellow vest’ protests in France and autocéphale in Ukraine. Yet Kremlin-linked media also state that Americans are increasingly in love with Russia and President Putin.

But let’s start in Brussels and with the EU which – according to Russian media – is an obedient vassal of Washington and is currently harassing the countries which wish to normalise relations with Russia.

And one should not play games with the Americans, according to the pro-Kremlin conspiracy theorists – look at what happened in France: the United States and United Kingdom, we learn, organised the ‘yellow vests’ protests to remove President Macron from power – and, being clever, then accused Russia of being behind it. According to pro-Kremlin media, looking for evidence that Russia might have been involved in the ‘yellow vest’ protests is just a ploy to cover up this political wrongdoing.

Finally on the Americans themselves: as mentioned above, pro-Kremlin outlets announce an outbreak of admiration for Russia and President Vladimir Putin in the US. In reality, though, Americans’ attitudes regarding Russia are now at their worst since the collapse of the USSR.

The old narrative about the West as anti-Russian was again cultivated this week. A clear example this time, it was claimed, was the UN General Assembly’s resolution urging the Russian Federation to withdraw its military forces from Crimea and end the occupation there. According to disinforming outlets, Ukrainians are encouraged through this resolution to commit “new crimes” and provocations in the name of Western political ambitions.

We were also informed, once again, that Russia has been wrongly accused of the Skripals’ poisoning! To add to the flow of “proof” coming from pro-Kremlin outlets – over forty false narratives so far – we heard that the fact that the Skripals are hidden away from public eye is the “proof” that the UK itself is guilty of their poisoning.

No, Ukraine is not an aggressor

According to Kremlin media, Ukraine is an aggressor and this week we learned that its president has declared war on Russia, through a new law that allows Ukraine’s armed forces to detain and shoot on sight all Russian vessels in the Black Sea. On top of that, there is a plan for a chemical provocation in Mariupol – with the help of those British specialists who poisoned the Skripals, of course.

The cherry on top of the disinformation cake is the disturbing conspiracy theory that there are apparently cold rooms in a Georgian laboratory, and that dangerous materials are tested there. We don’t want to give ideas to Kremlin trolls, but there are cold rooms in most laboratories we think, and in plenty of ordinary houses as well. They are called pantries. We can only imagine what kind of dangerous materials one could find there.

Date
Title
Outlets
Country
European Parliament is elected and paid to represent the interests of the USA
Vremya Pokazhet @1 kanal (15.30 - 16.04).
US
The West is planning revolutions in the former Soviet Republics
Parlamentskaya Gazeta, life.ru
USSR, Russia, US
UN resolution is yet another act of the West's anti-Russian campaign
Sputnik Poland, Sputnik Poland
Russia, Ukraine
Russia may join the EU army. Its request to join NATO was rejected
News Front
USSR, Russia, US
Ukrainian sailors detained by Russia do not want to return home
News Front
Russia, Ukraine
US is threatening the EU and tries to stop the Nord Stream 2 project
News Front
Russia, US, Germany
US secret services behind colour revolutions in different countries
News Front - Russian
Russia, Ukraine, US
Map shows: EU on fire
Twitter Resource
Norway
CIA behind establishment of the Ukrainian Orthodox Church
RT Germany (old)
Ukraine, US
Ukraine will detain all Russian vessels in the Black Sea and will shoot on sight
ukraina.ru, Moskovskij Komsomolets
Russia, Ukraine
UK violated Article 11 of the Universal Declaration of Human Rights by blaming Russia for Skripals poisoning
Going Underground on RT - YouTube
UK
The protests in France were organized by the UK and US
ukraina.ru, politexpert.net
UK, Russia, US
Ukrainian President Petro Poroshenko has declared war on Russia
60 minut @Rossiya 1 - YouTube
Russia, Ukraine
CIA behind the autocephaly of the Ukrainian Orthodox Church
regnum.ru, Sputnik News Russian
Russia, Ukraine, US
US completely destroyed a hospital in Syria
Sputnik English
US
Yellow vests protests in France are anti-EU protests, this is why they are dispersed with such police cruelty
Vecher s Vladimirom Solovyovym" @ Rossiya 1 (1.49.30 – 1.50.18)
France
Americans love Putin and Russia more and more
Ria Novosti
Russia, US
No Russian trace in the 'yellow vests' protests – concluded by France
Sputnik English
Russia, France
The fact that Skirpals are held away from public eye proves that UK is guilty
Vecher s Vladimirom Solovyovym" @ Rossiya 1 (1.55.45 – 1.56.05)
UK
The US is pushing the world to the World War 3, which will be a nuclear war.
Vesti.doc talk show @ Pervyi kanal
US
According to Germany, NATO is not needed anymore
Germany, Georgia
By terminating the Friendship Treaty with Russia, Ukraine lost its rights of passage through Kerch Strait
Ria Novosti
Russia, Ukraine
Brussels is one of the most dangerous and criminal European cities
Politicano - Facebook
Belgium
"Cold rooms" in the Lugar laboratory
Sputnik Georgia - Russian
Georgia
Austrian doping investigation of Russian biathletes is a provocation
Vesti.doc talk show @ Pervyi kanal
Austria
EU-Georgia Association Agreement is classified
Georgia
French intelligence allowed Strasbourg attack to happen, it is linked to the European Parliament elections
Pervyi Kanal
France
Ukraine is preparing a chemical provocation in Mariupol
60 minut @Rossiya 1 - YouTube
Ukraine
Ukrainian boats illegally crossed the Russian maritime border
Sputnik English
Ukraine
Ukraine intends to punish and kill civilians in Donbas
60 minut @Rossiya 1 - YouTube
Ukraine
The US is paying for Ukrainian security forces and Ukrainian provocations
life.ru
Russia, Ukraine, US
An Orthodox church in Ukraine seized by unknown people
TASS - Russian, lenta.ru, utro.ru, ntv.ru, RT Russia, Tsargrad TV
Russia, Ukraine
EU and US are pressuring Austria to conduct doping investigation into Russian biathletes
Pervyi Kanal
Austria
Looking for Russian traces in the 'yellow vests' protests is a cover-up
Sputnik English
UK, Russia, US, France
Expired products allowed to be sold in Ukraine
ukraina.ru
Ukraine
Poroshenko is preparing a provocation at the Ukrainian-Russian border
Sputnik Poland
Russia, Ukraine
The US organized a color revolution in France, to get rid of Macron
News Front - English
France
Russia was not involved in 2016 US elections, it was Mossad, UAE, al Qaeda and ISIS
News Front - English
US
French police in solidarity with the 'yellow vests' protesters
RT English, Sputnik English, RT English, RT Germany (old)
France
By continuing to browse the site you are agreeing to our use of cookies.